Last week I had the pleasure of attending Tanqueray Tones, a night of gin, glamour and jazz at the Lucky Pig in Fitzrovia. As we entered this little, shabby-chic drinking den, we were warmly welcomed by ‘Earnest Anyway’ a dapper and excitable young gent from Victorian times who was soon joined by his lady friend Goldie, or Lulu depending on her mood, who was draped in 20s fashions and could be seen dancing the Charleston periodically through the night as she mingled with her guests. 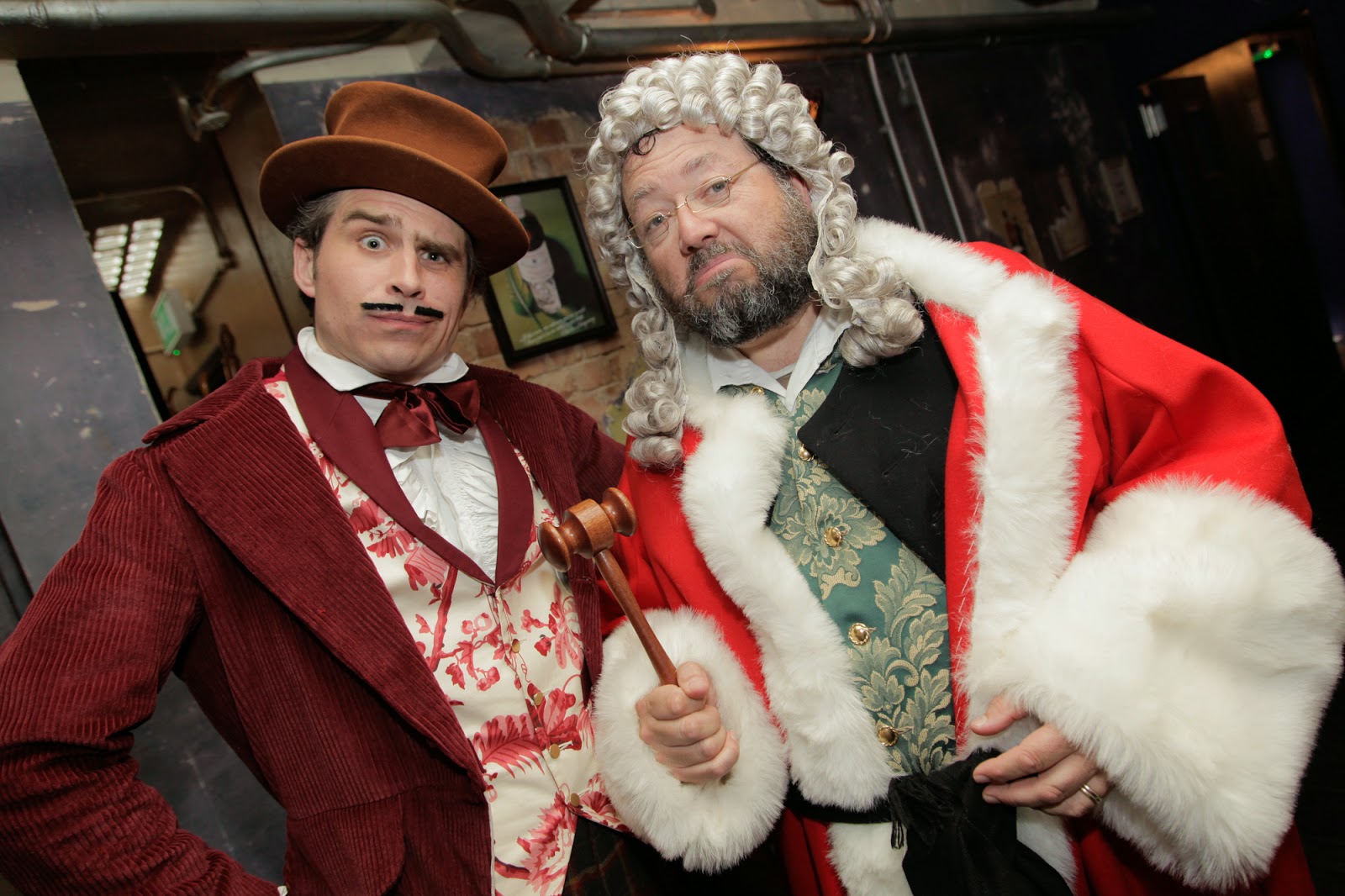 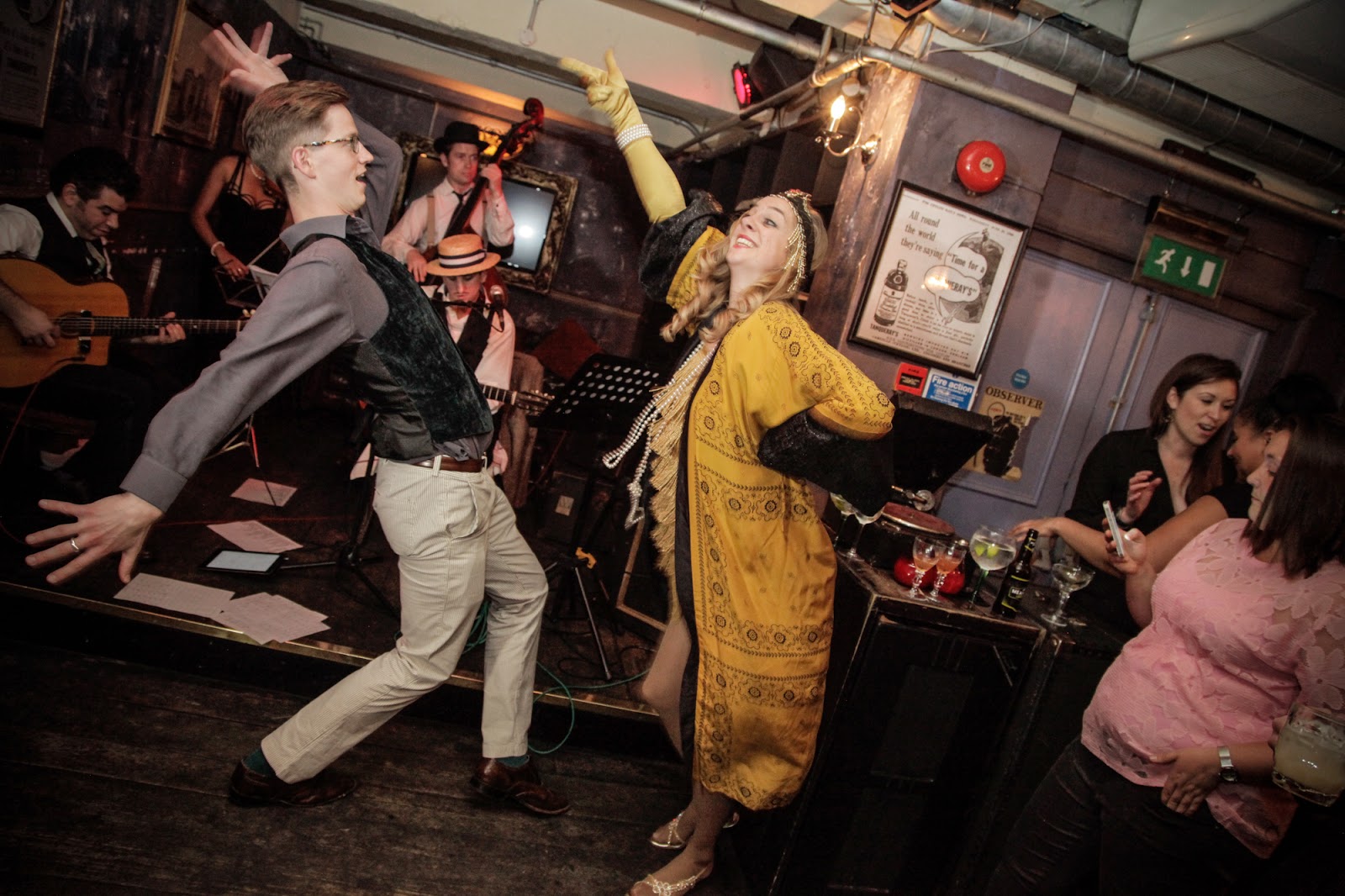 On the right a temporary hair salon, barbers and shoe shine were set up to make sure all the guests looked as spiffing as possible, and on the left the band were ensconced, doing a couple of sets of ragtime and real 20s music, not modern stuff reinvented. And, for some unexplained reason, there was also a judge running around telling everyone what they were doing was illegal (gin was banned and that was never, actually, overturned) and photobombing people’s pictures. 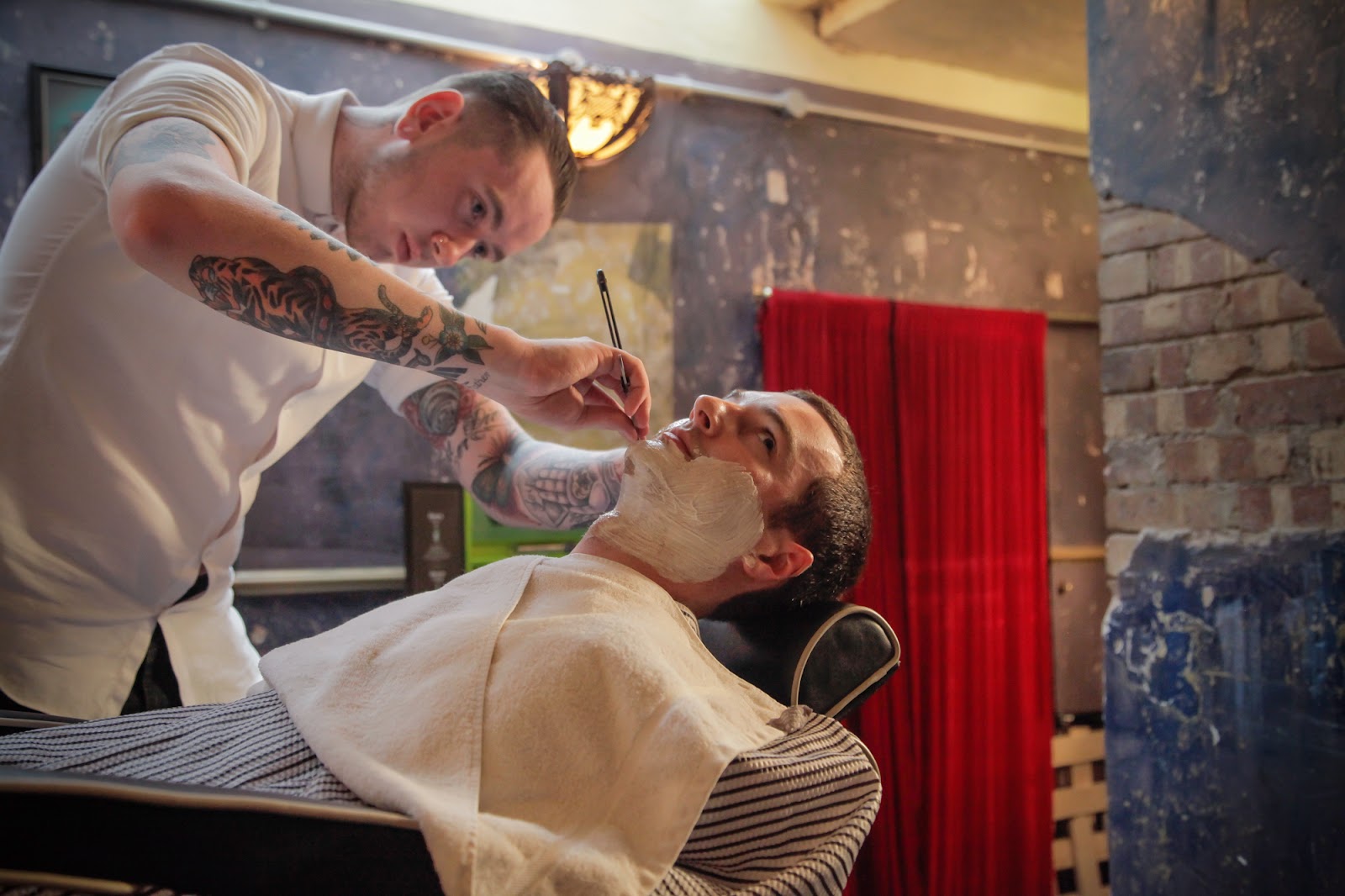 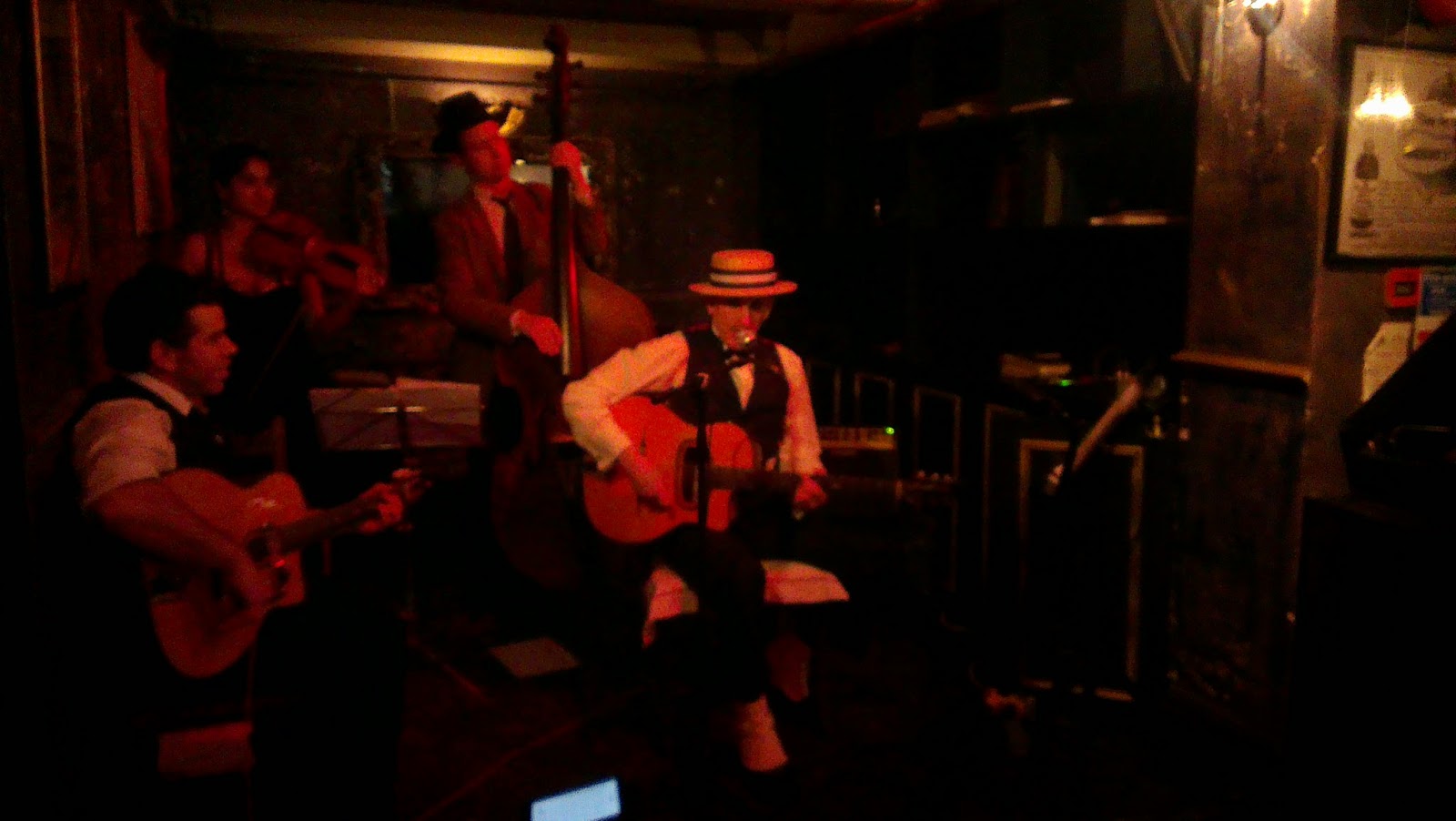 Ah yes, the gin – for that is what we were there for. World Gin Day is the 14th and this was a bit of a precursor to the event, and something to get us all to turn to Tanqueray for when the real celebrations start. We had four cocktails to choose from, plus a gin and tonic (served in the most amazingly huge glasses), each created by a top bartender. The only one I didn’t try was the Ishikari Fizz because it had jasmine tea in it and I don’t like tea, which is a shame because I do like the Worship Street Whistling Shop and that was their creation.

So yes, we tried all of the cocktails at least (see below for details) once but kept coming back to the Bee’s Knees which was aptly named because it was far and away our favourite. The gin flavor was to the fore, but had just the right hint of sweetness and lavender that wasn’t overpowering.

Canapes were handed out throughout the event, making sure we didn’t become too sizzled. My favourite was a breaded ham topped with mustard, although the whipped goats’ cheese tart was also very good. They all were, in fact and I appreciated that some thought had obviously been put into creating something a little more interesting than your usual finger food. Duck pate was topped with rhubarb and we had spoons of a gin-infused jelly topped with ham. And they did not skimp on the gin at all. Wow. 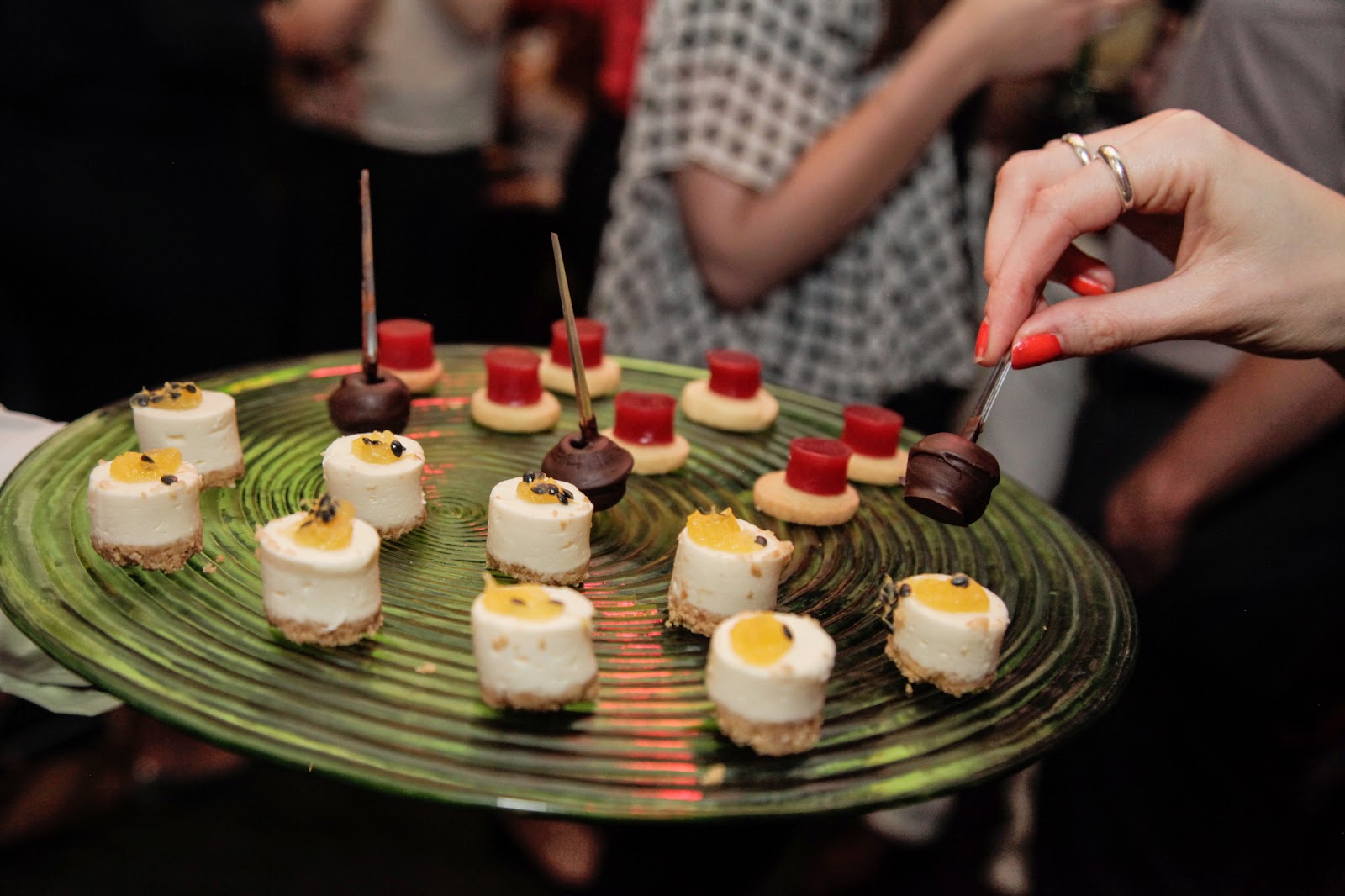 A light and creamy mini cheesecake and/or chocolate truffle lollipop served as dessert.

And then, later in the evening a cocktail of gin, martini and something else I’ve forgotten was passed around so that we could toast our hosts for the evening while the gentleman below gave thanks on our behalf to Tanqueray and reminded us of some of the reasons we were there. 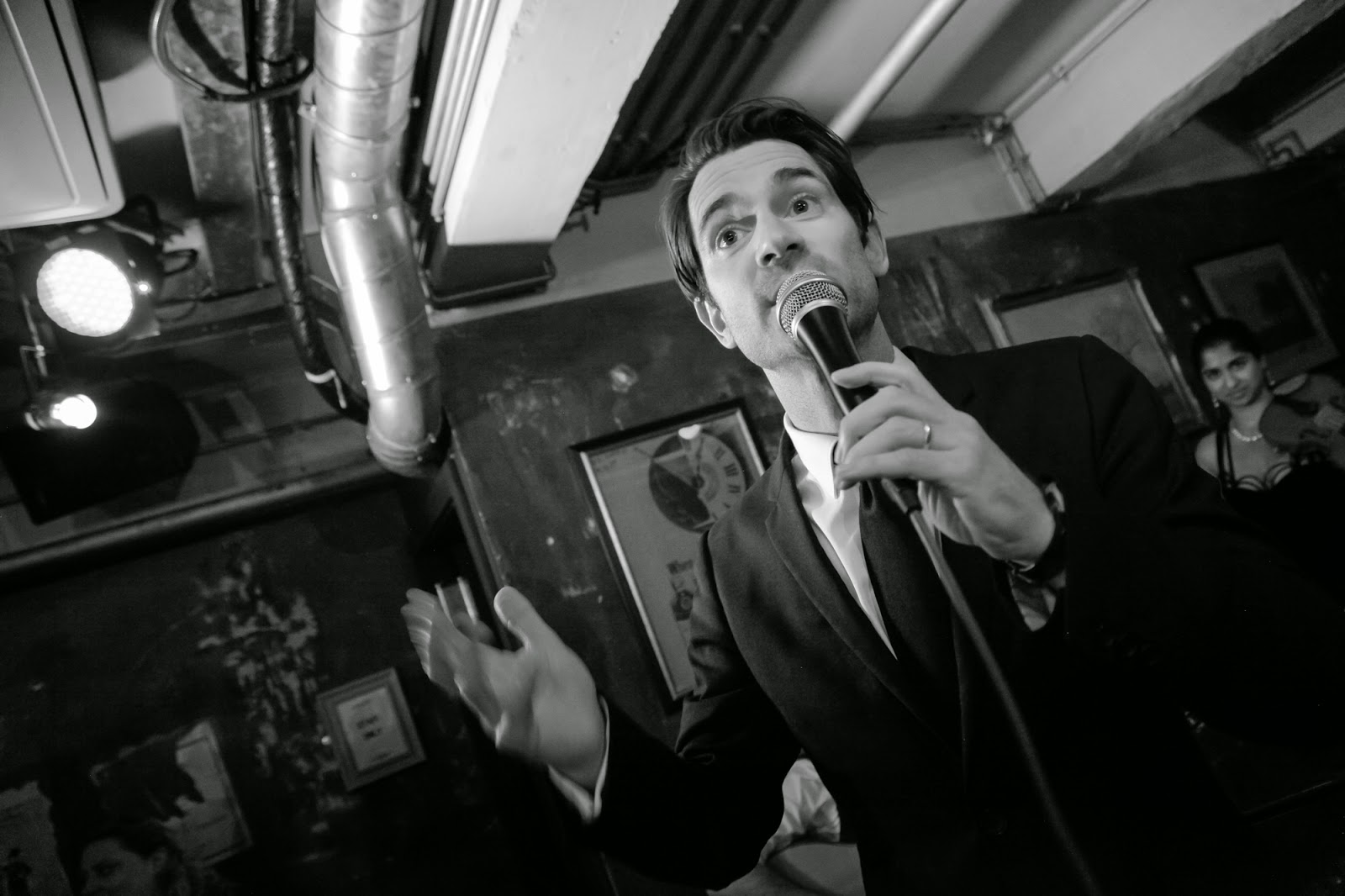 It seemed to me everyone was having a whale of a time, myself included. One of the most enjoyable events I've been to. The characters were great, the cocktails and canapes were delicious, the setting was perfect and the vibes were fantastic. Thanks Tanqueray! 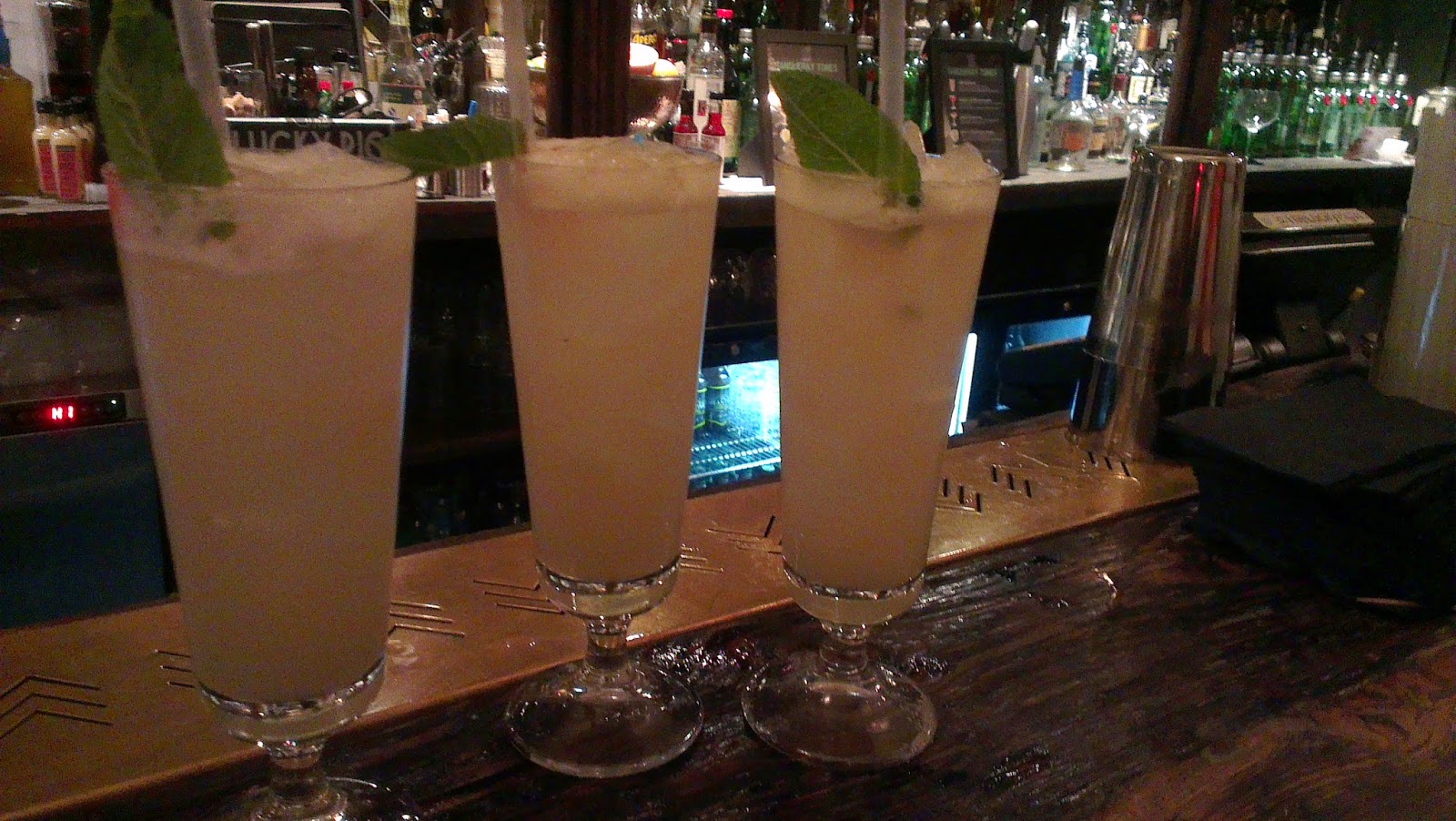 Ishikari Fizz – A Modern Molecular Mix
The Japanese river Ishikari's name means 'to go around itself' and has inspired the emulsification of this drink, which uses egg to hold all the components together. Formulated by award-winning mixologist Tristan Stephenson who is leading the drinks scene with his unique lab-based creations, this cocktail represents a modern cocktail concoction and features oriental ingredients such as yuzu juice and hints of jasmine.
For this truly complex and intricate cocktail serve visit The Worship Street Whistling Shop.

Bloomsbury Bronx – Reminiscent of Lavish 1930s Cocktail Parties
Devised by Tanqueray GB Ambassador Tim Homewood this cocktail signifies the new era of citrus-based cocktails that rapidly took over the drinks scene in the 1930s. The poignant flavours of the Bloomsbury Bronx match the spirit of the post-prohibition years and the ever-growing passion for gin.

Lavish cocktail parties were all the rage at the time so why not enjoy this cocktail in the comfort of your own home by following this simple recipe, below.
50ml Tanqueray London Dry Gin
10ml Maraschino
15ml Antica Formula
25ml Orange Juice
2 dash Peychaud’s Bitters
Method:
Add all ingredients to a shaker with cubed ice, shake and double strain into a chilled cocktail glass. Garnish with a cherry on a cocktail stick.
Units: 2.2

Bee’s Knees – Inspired by the Roaring 1920s
Created by Head Bartender at The Lucky Pig, Dren Lala, the Bee’s Knees matches the flavours enjoyed in the speakeasies of the time. Make your taste buds tingle with an infusion of Tanqueray London Dry Gin accompanied by lemon, honey and a lavender at decadent drinking den, The Lucky Pig.

Flash of Lightening – Inspired by the Birth of 1800s Gin Palaces
Tanqueray Global Ambassador Barrie Wilson has devised a bespoke apricot, mint and lemon cocktail for World Gin Day inspired by the emergence of Gin Palaces in the early 1800s. These alluring drinking dens offered ground-breaking serves, such as gin infused with peppermint or sugary cordials.During the reign of Gin Palaces, the slang term ‘lightning’ described a ‘dram’ of gin.
Try this modern take on a 'flash of lightning' at the Gin Monkey World Gin Day Jazz Party.
Posted by Ginglesnuff at 2:07 PM