I couldn’t make either the opening of the Galvanisers Union nor its kitchen launch so I was ostensibly invited to come and review the food last night. So I shall talk about the food which was fine, but in my opinion isn’t the real draw of this pub.

The Antic group have slowly and stealthily been taking over London in the last few years. It would be insidiuous and creepy if they weren’t so good at turning out proper boozers you want to come to again and again. If you’ve noticed a long-neglected building suddenly getting a new lease of life, chances are it’s been taken over the by Antic crew.

Ok, so, the food... We happened to have the whole dining area to ourselves because, well, it was a Wednesday and The Galvanisers isn’t exactly in the throng of things. We didn’t mind though. The place had such a cosy character that even with only the two of us in there it didn’t feel empty. 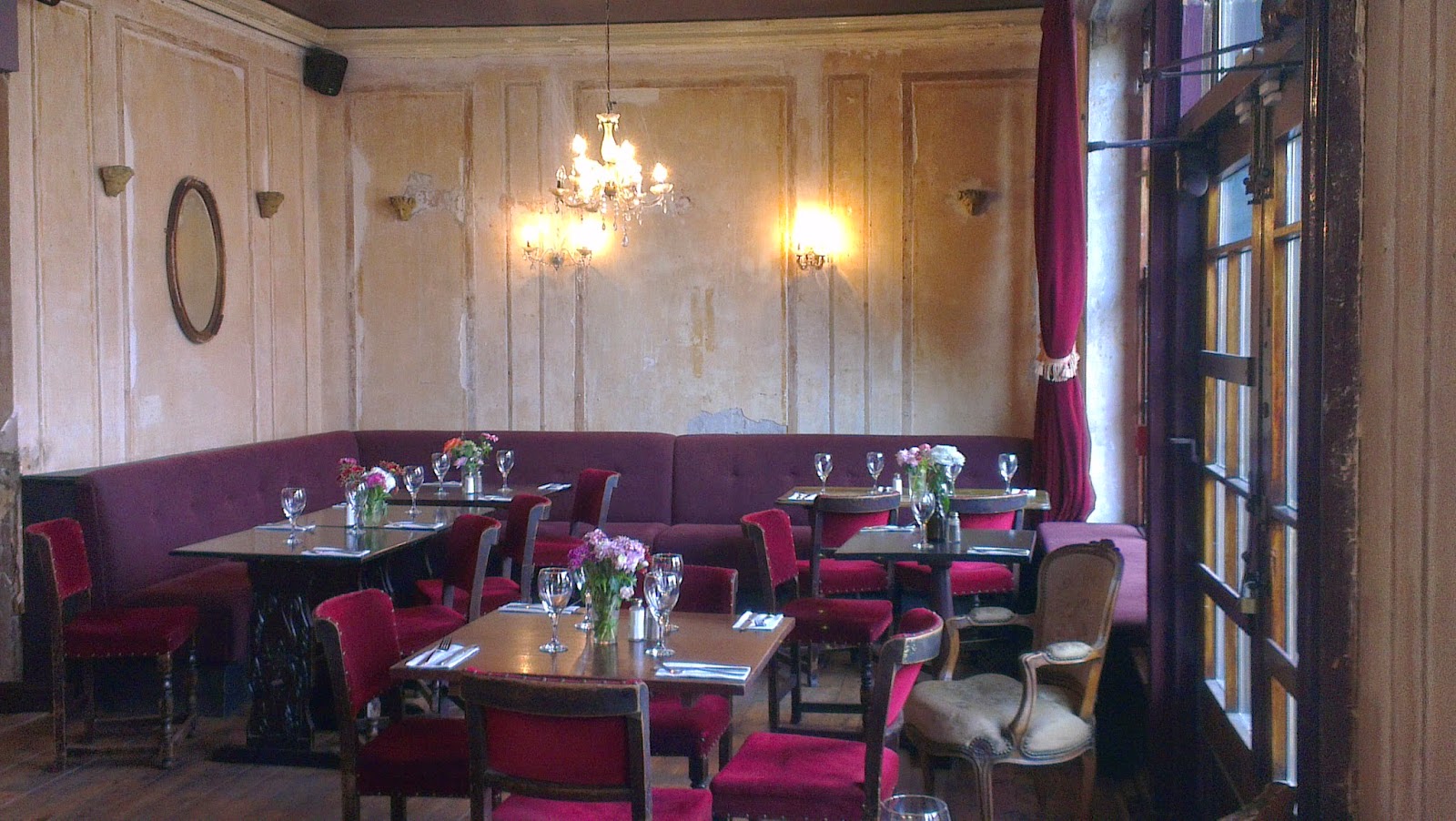 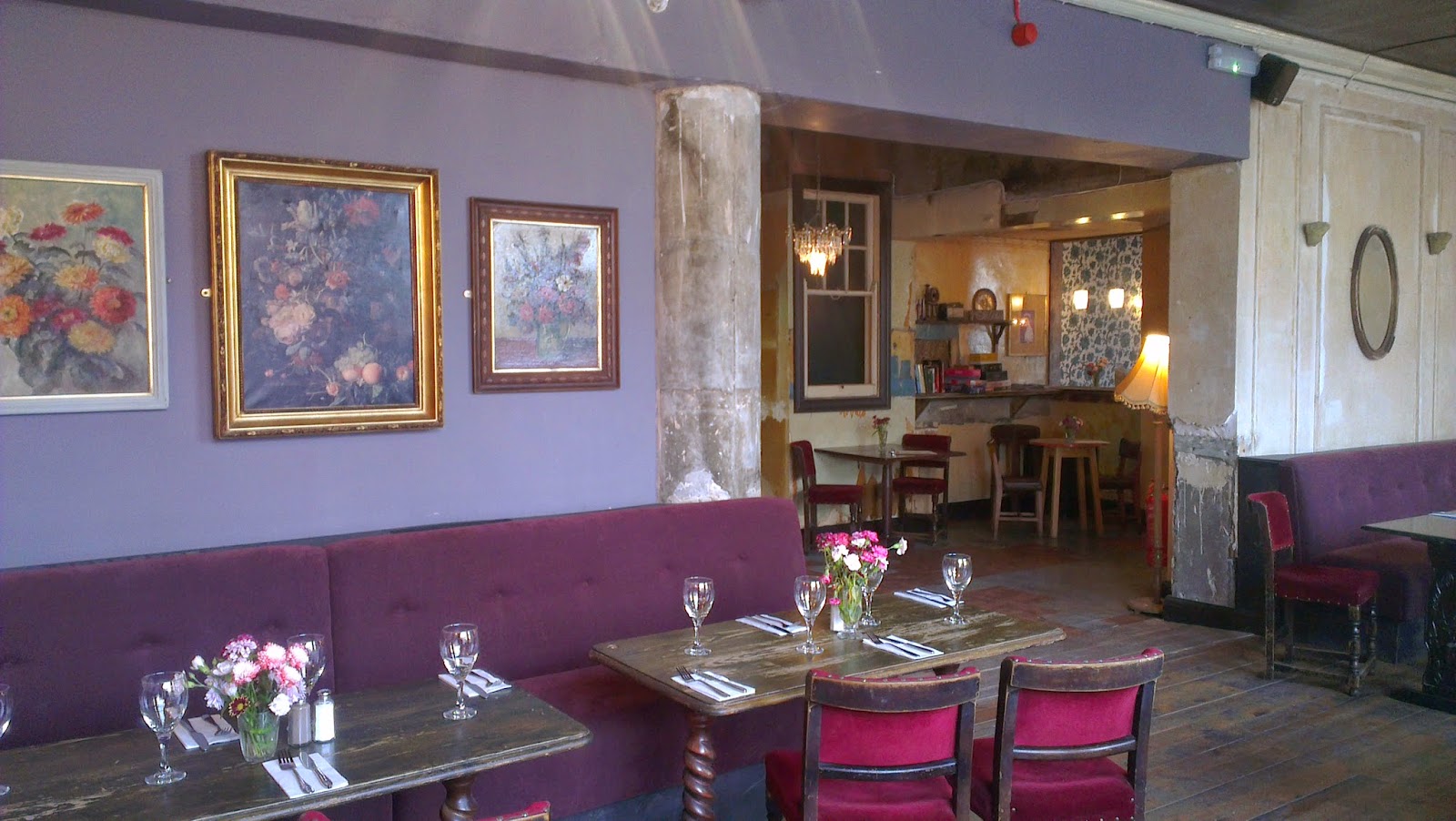 Now, I don’t mean to denigrate the food at Galvanisers Union, I just want to set it in context. This is a pub and what they’ve got on the menu is pub food in the original sense of the word, not in the poshed up gastropub sense of the word. That doesn’t mean it isn’t somewhat refined but it’s stuff like fish and chips and pies and of course a Ploughman’s! The most expensive dish is a salt beef bun for 10 quid so the prices are excellent.

Stephen for some reason decided to be girly and order the ham and egg salad, and I had the pie which was chicken and leek. It came with mash and parsley liquor and then we also got some frickles to share, mainly because I just loved the word.

Saying ham and egg salad belies what it really was – it was ham hock croquettes with boiled egg on leaves with pickled veg such as radishes, gherkins and little cauliflowers. It looked ever so pretty set down but they seemed to have made the mistake a lot of places make with salads in making it very insubstantial. Stephen kept referring to it as a starter because it was so tiny. More leaves please! And more of those really lovely pickled veg! I know people order salad because they're trying to be healthy - but that doesn't mean they don't also want to feel full after eating it. 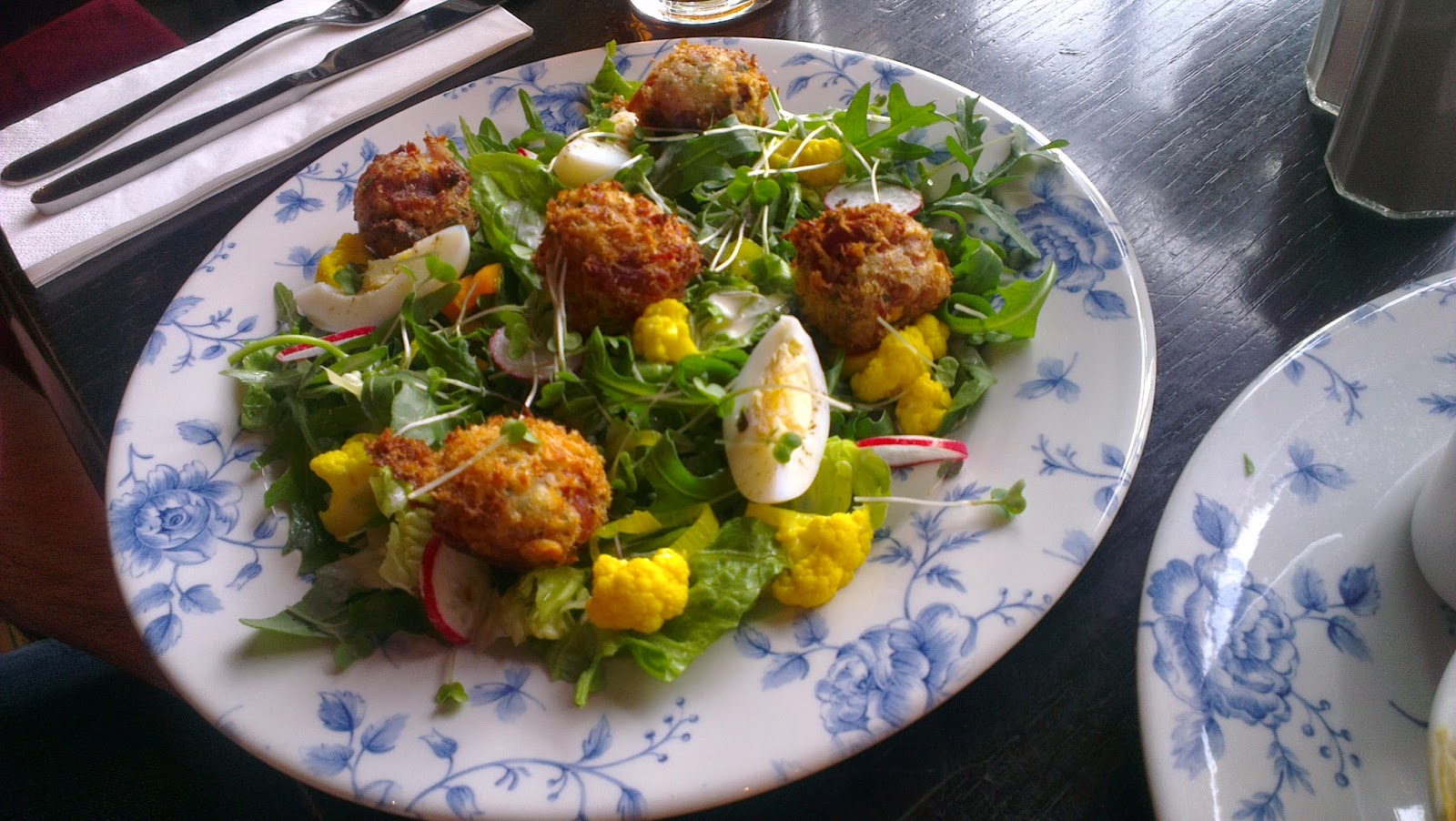 My pie was a lot heartier. When I first punctured the pastry I thought it was mostly a watery filling but actually there was quite a lot of chicken inside, enough for me to share with Stephen without begrudging him when he had finished his salad and was still hungry. The liquor was lovely and the pie was tasty. The mash could have been a little more indulgent but then again I’m never going to say no to more cream and/or butter! 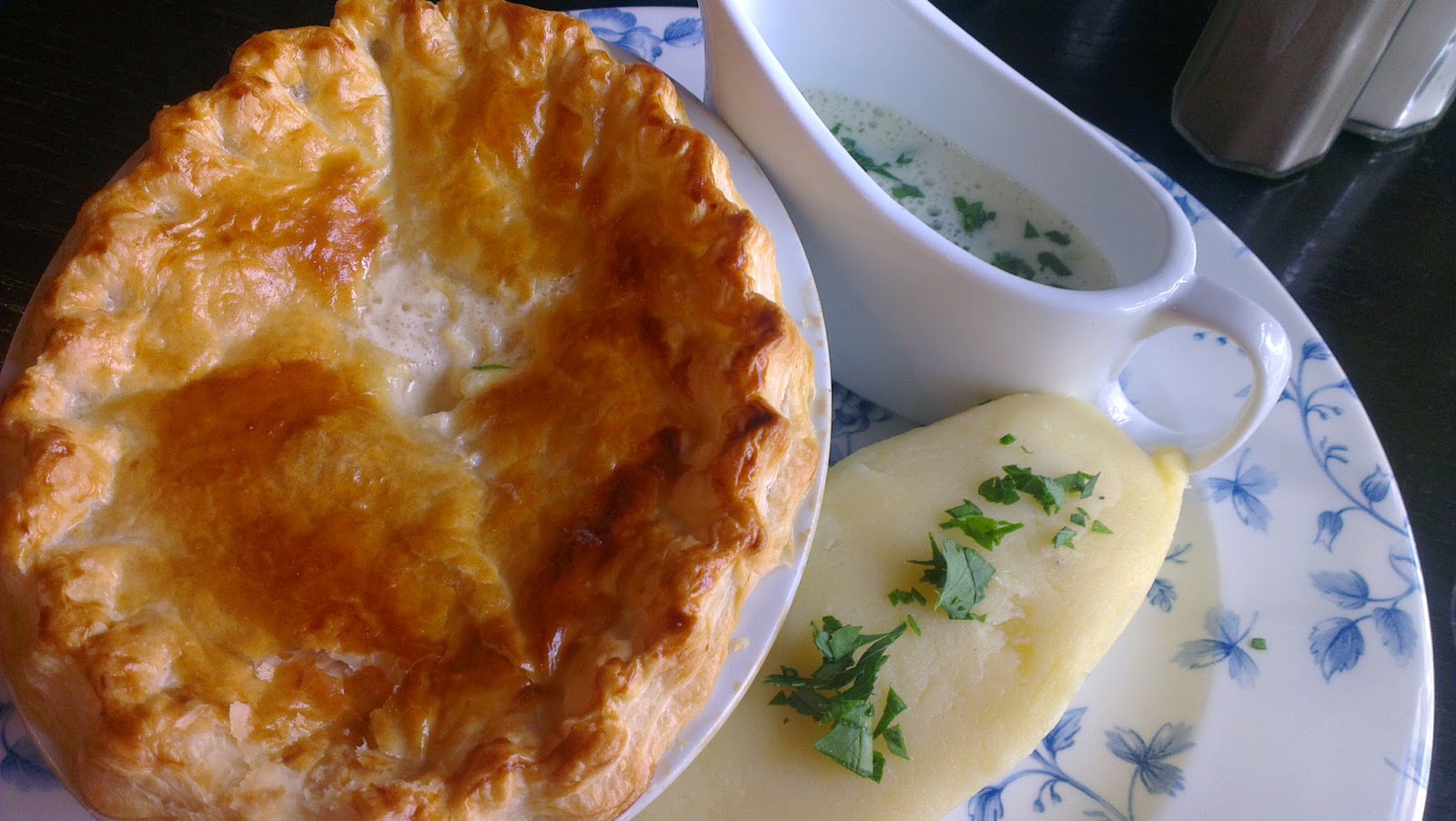 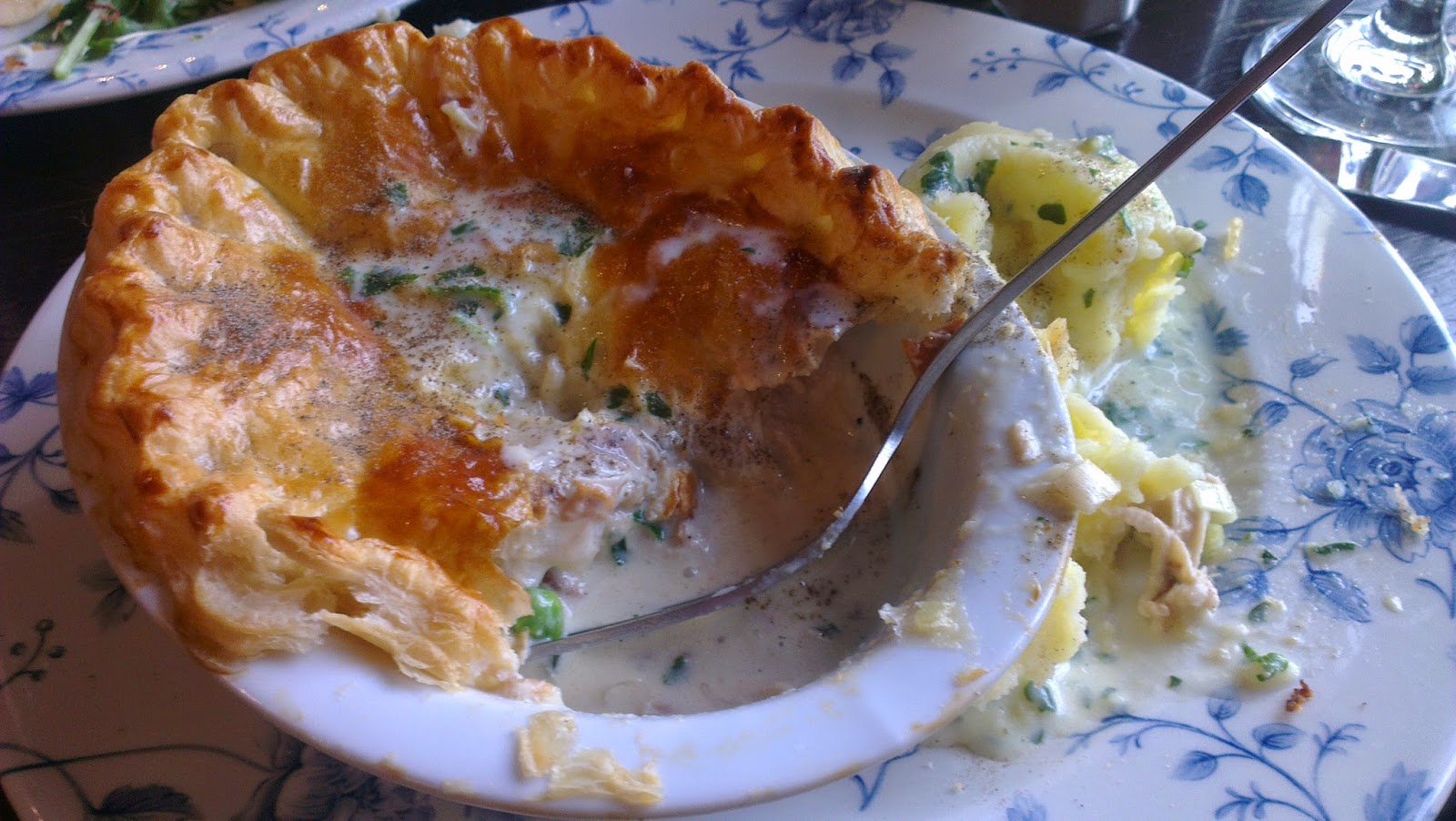 The frickles were fabulous. They are beer battered (fried) pickles and they are done with such a good light touch that the batter didn’t overpower the taste. There seemed to be two kinds – pickled onion rings and battered slices of gherkin (my favourites) and the dip they came with was very tasty. That didn’t last as long as the pickles did! 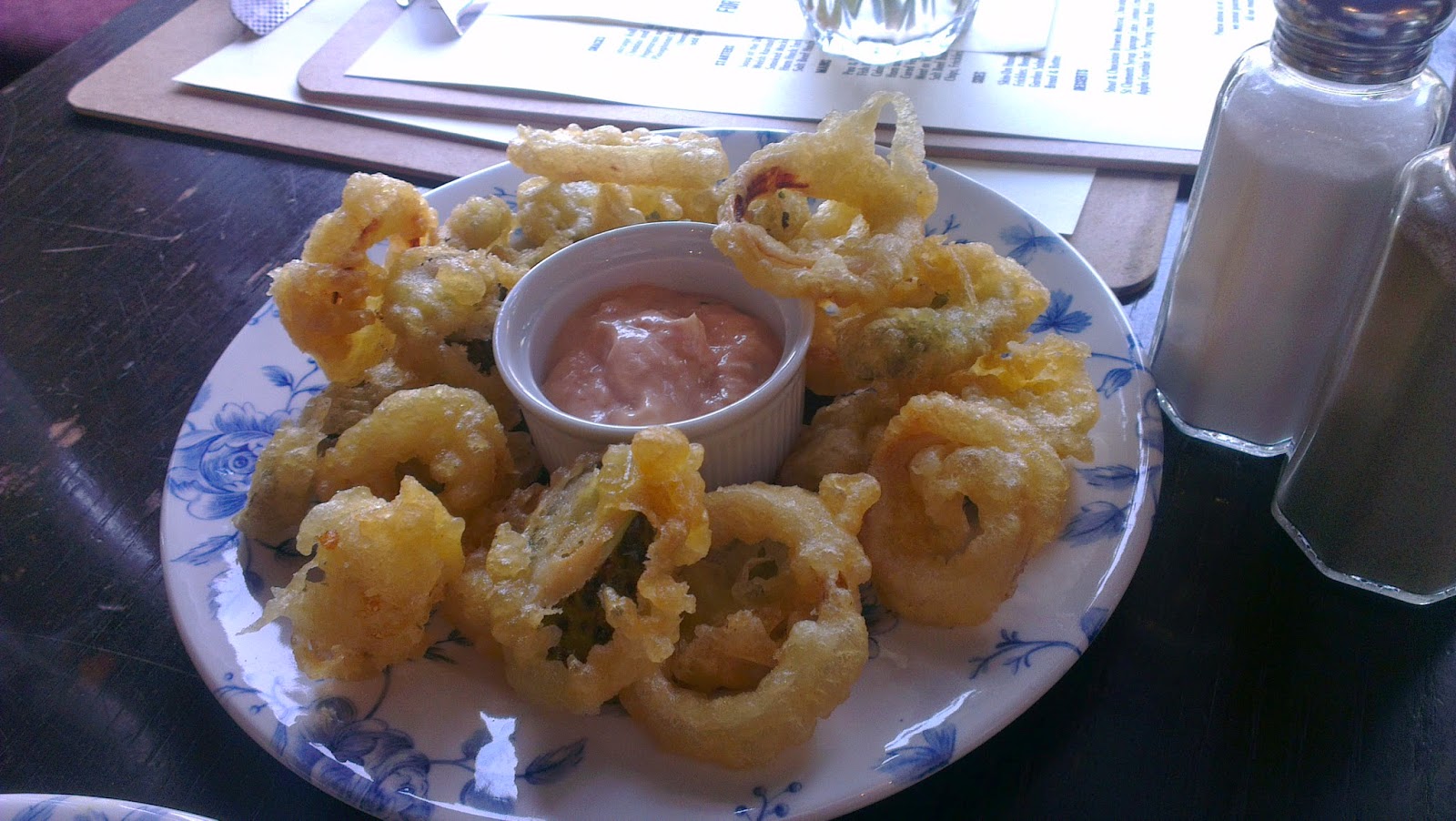 Dessert finished me off as I had a ridiculously rich stout and chocolate mousse with cakey stuff at the bottom. I loved the chocolate pretzels and brownie it came with but think it would be even better if the mousse was sprinkled with them or even if they were dotted throughout. Stephen had the St Clements syrup sponge cake which was very sugary, sticky and delicious. Stuffed! 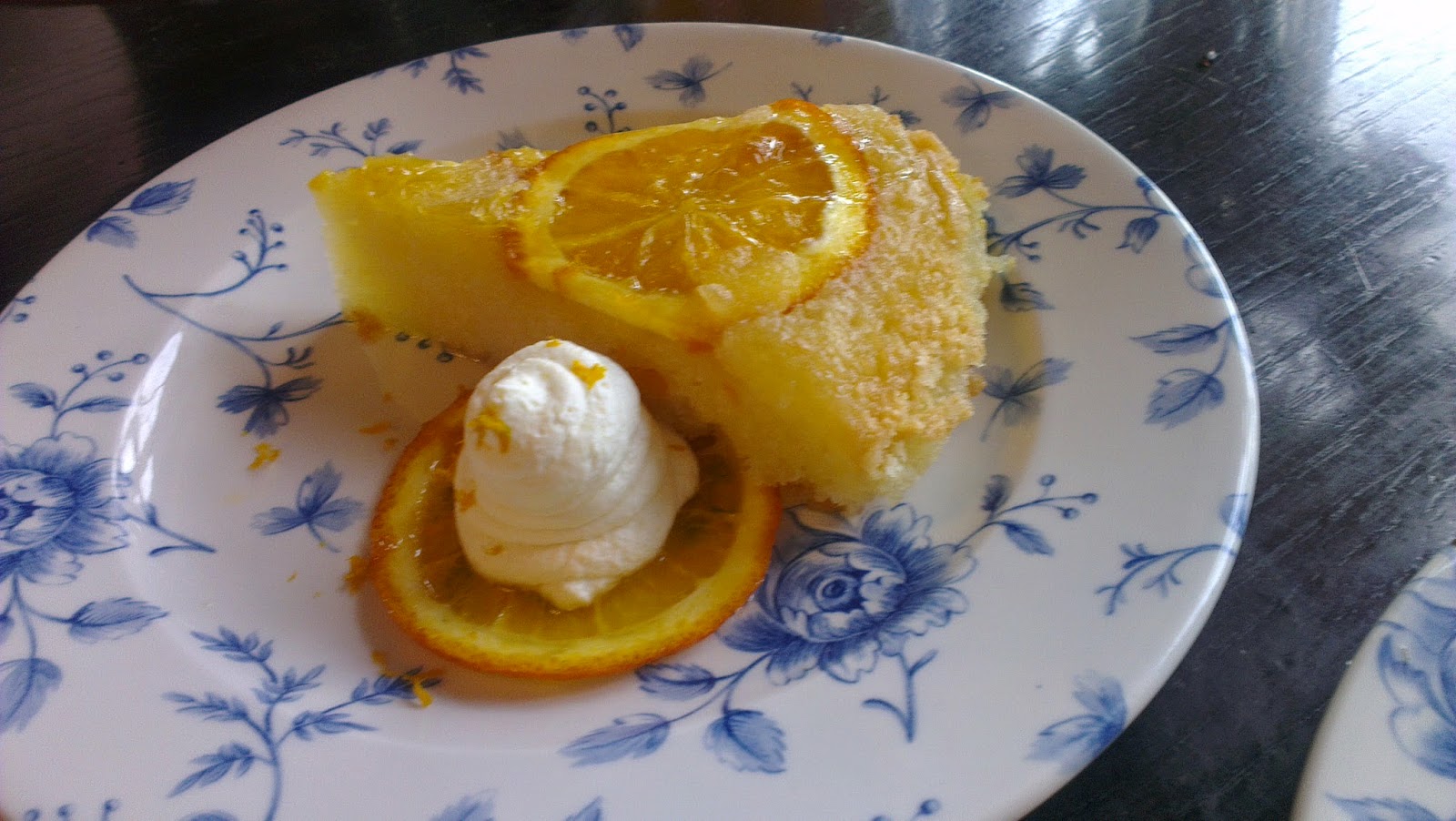 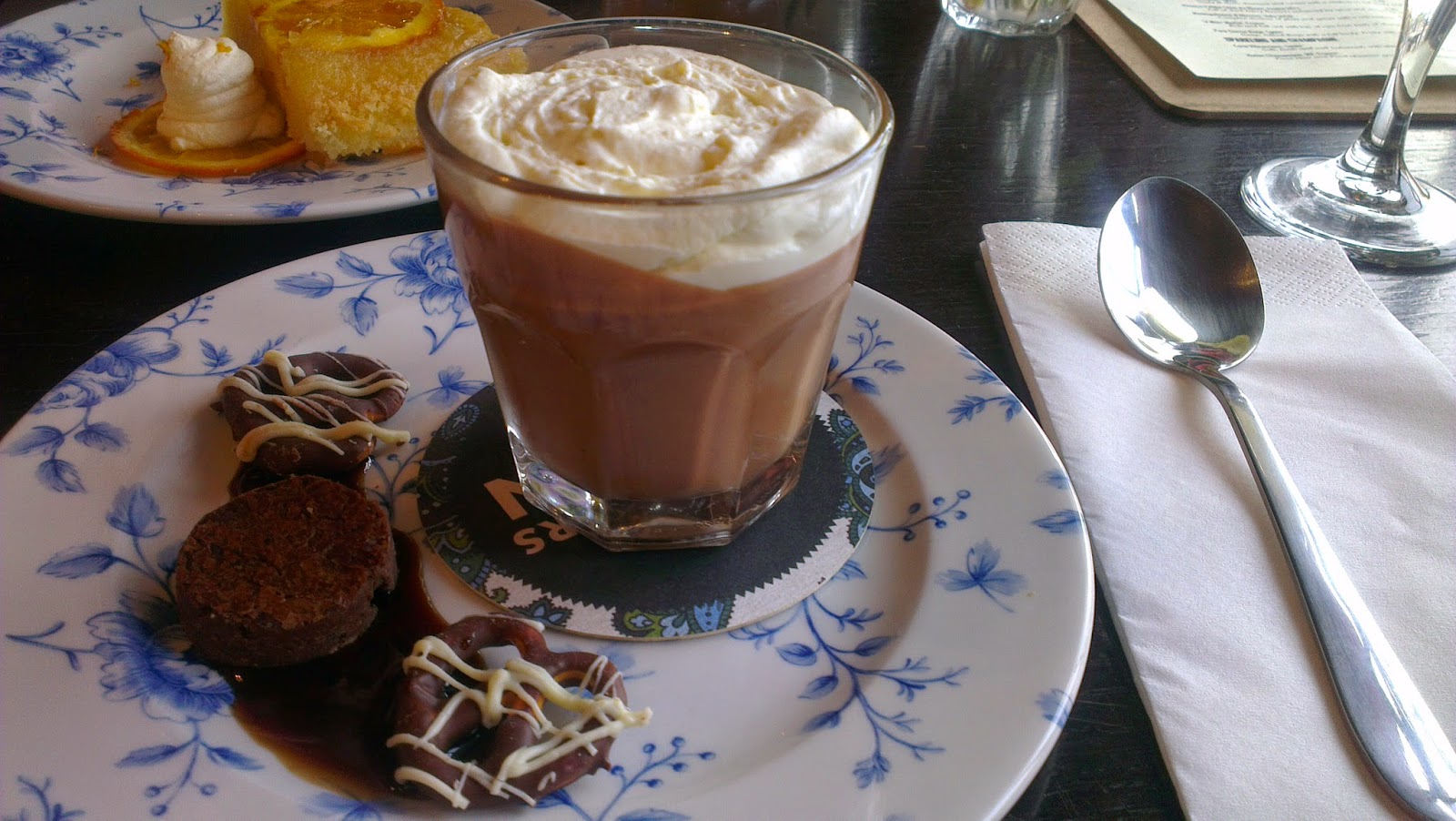 We then went over to the bar for a relaxing drink after. They have a fairly decent selection of beers (several ales including Meantime as well as stuff like Heineken etc) and quite a few ciders. They were happy to let me have a taste of one that was 7.5% but it had a weird bitter taste and a musky smell so instead I had a milder 4.5% one. There is a mix of sofas, cushioned chairs, or a central bank to sit at and the whole place already has that lived-in local feel that Antic accomplishes so well. It was by no means packed and because of its location it is unlikely to ever get too rammed (it is right on the A12) but it’s clearly meant to be a neighbourhood pub and that’s what it feels like. 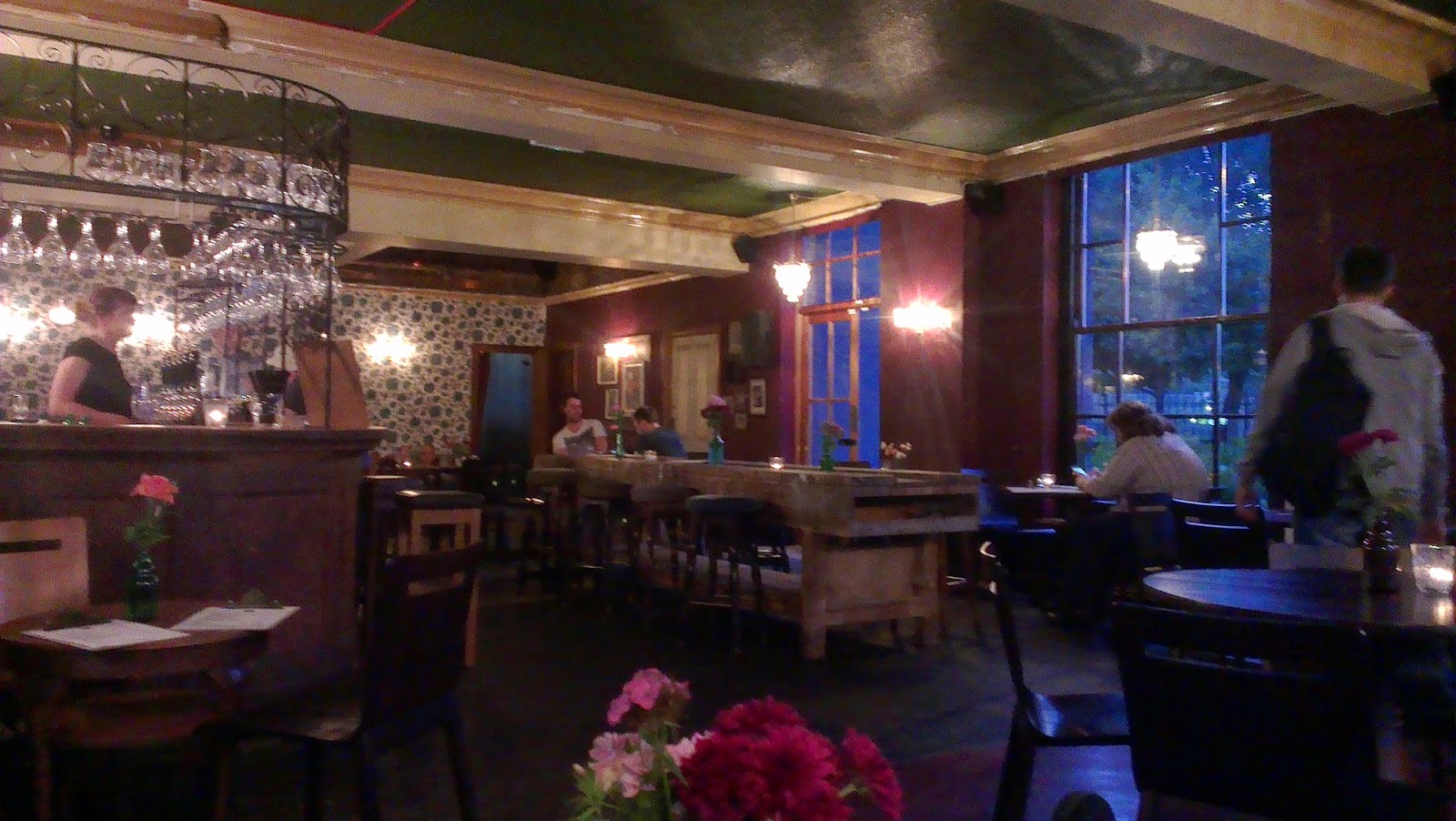 Both Stephen and I were really enamoured with the place. I’ve been to Farr’s several times and The Old George and I feel the same way about them. The look may be somewhat manufactured but it really works. They also had board games and it was the kind of place I could imagine whiling away a few hours and actually playing them. They’ve installed a screen if you want to catch any World Cup games, though they’re also keeping the dining area footie-free and the screen will go once the World Cup is over. It’s that kind of place – the focus is on being social – they don’t want to turn you into a bunch of zombies staring at a screen. 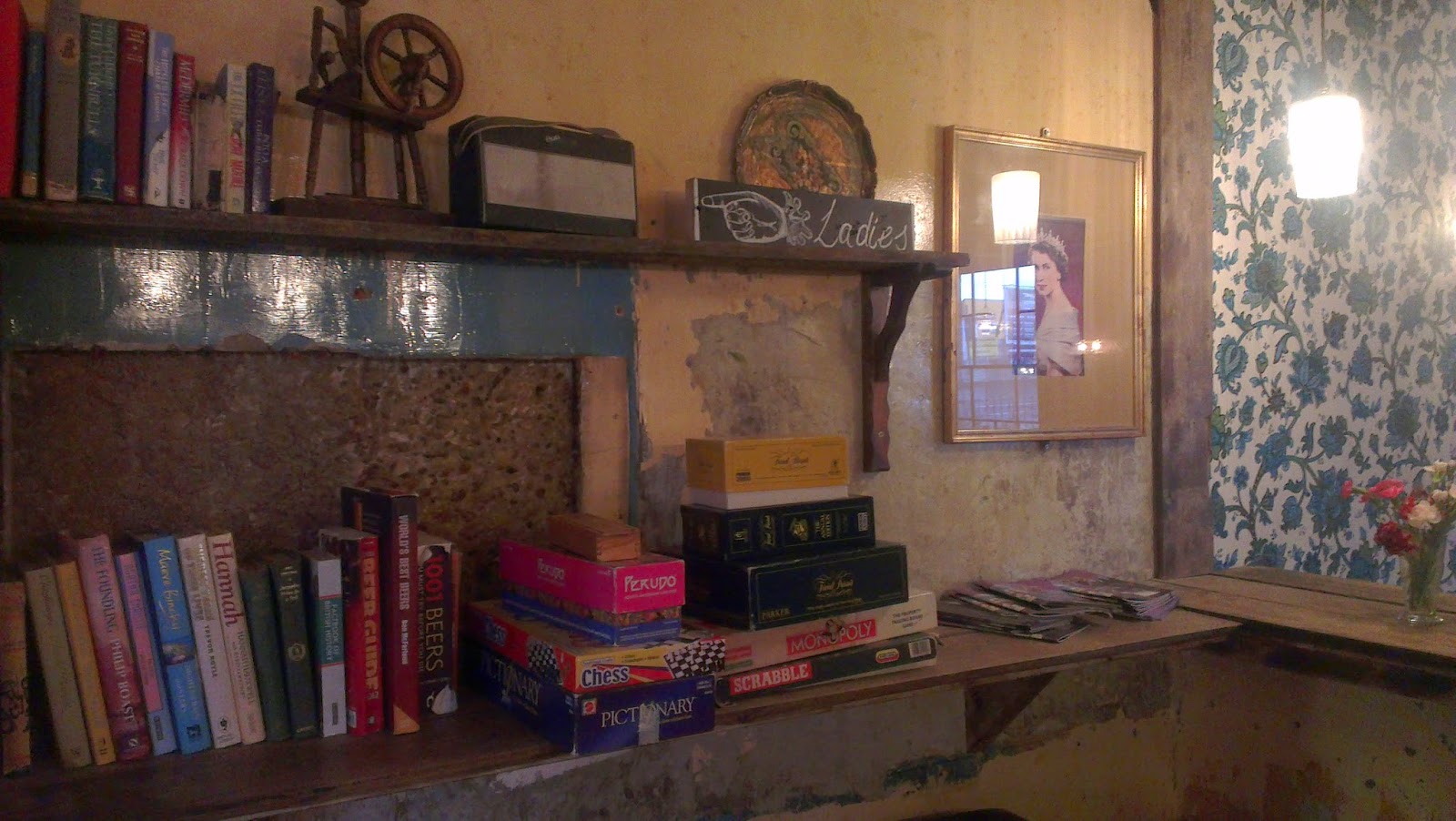 It took us less than 10 minutes to get home on the bus so even though it’s not quite our neighbourhood, we may just adopt it as our local anyway.

Posted by Ginglesnuff at 5:08 PM