I've been meaning to get to Satan's Whiskers for a while now. They hadn't quite opened the first time I wanted to go, and they were too full the second. Third time's the charm and just to be sure we made a booking. 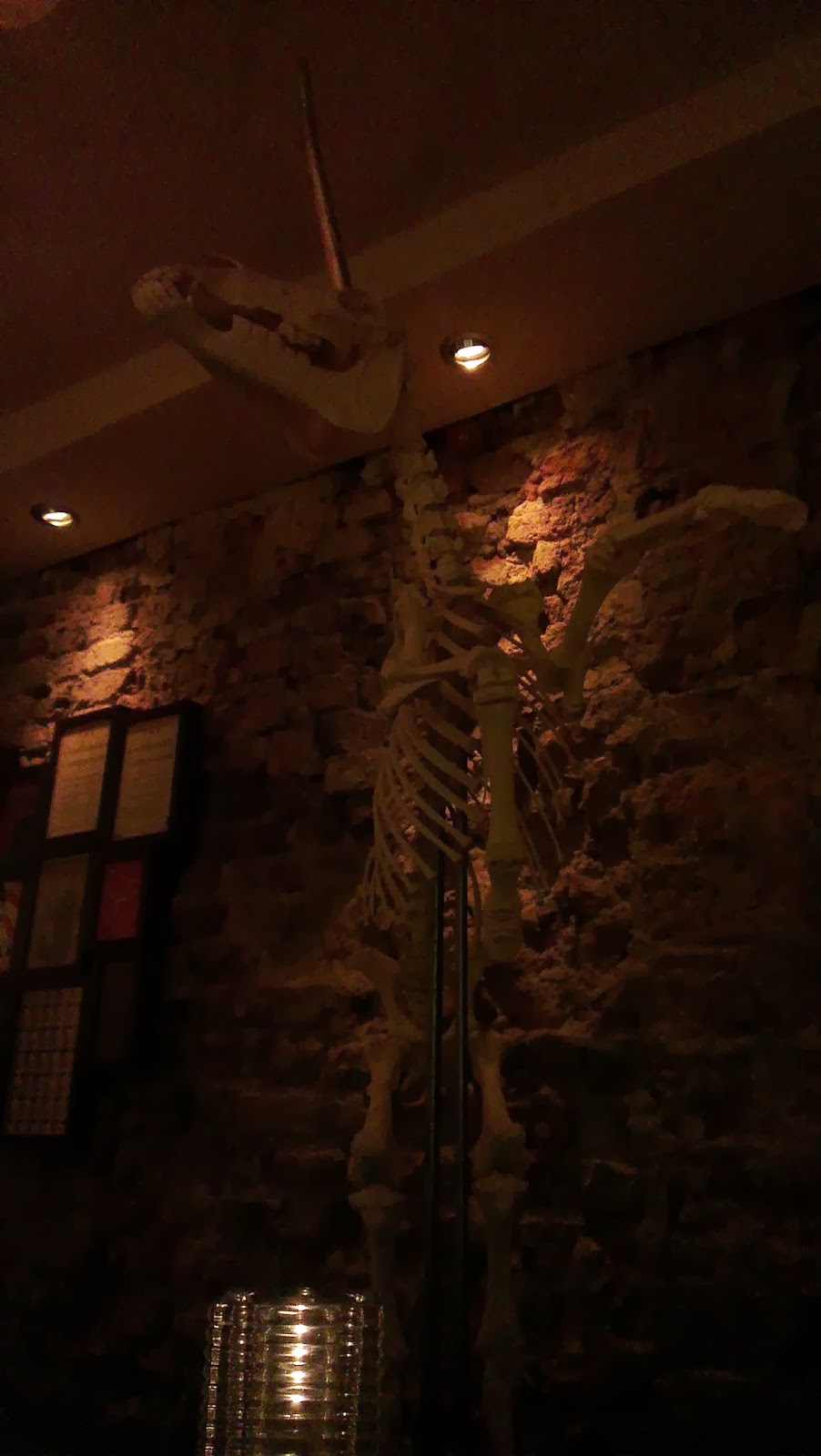 We weren't sure if they did food and didn't think to look until we were on the tube on our way there. Deciding not to risk a hungry evening in case they didn't, we went round the corner to Hawker House (any excuse). We both tried a new trader, and, as we have come to expect, loved it. I had my first Born and Raised pizza - pepperoni, and Stephen had a bento box from Hot Box. My pizza was an oblong individual pizza cut in half. It was amazingly oozey – sauce and pepperoni juice ran down my hand the minute I took a bite. Stephen's bento box had a smoked beef, pork and jalapeno sausage with a barbecued chicken thigh. Plus a piece of cornbread and some BBQ sauce. Neither meat needed any sauce to go with them as they were both incredibly juicy and tender.

When we arrived at Satan's Whiskers, we were seated in a prime location - in a corner, with the skeleton of a unicorn overlooking us. (Unicorns don't exist because Satan's Whiskers killed the last one to put in their bar.)

One of the many lovely waiters we encountered informed us cocktails were on the front of the menu and food/wine/beer were on the back. Food! So they did do it! And it was all so reasonably priced and sounded pretty decent. It also turned out to be better than simply decent. Stephen stepped up to the plate - he was still peckish after his meat appetiser and after our first drink ordered the brisket bun, which was topped with coconut coleslaw and came with a dollop of chilli corn on the side. I had a bite or two and I must admit, even though I don't like coconut, the sweetness it added to the 'slaw was a perfect touch.  I had a fork of the chilli corn and wished we'd ordered the full side of it as it was so good. I don't much care for corn ordinarily, but the heat of the chilli in this made it a really moreish dish. The food happened to coincide with me ordering the penicillin - a drink which includes peat, giving it a very smoky taste. It couldn't have paired more perfectly with the chilli corn and the smoked beef. 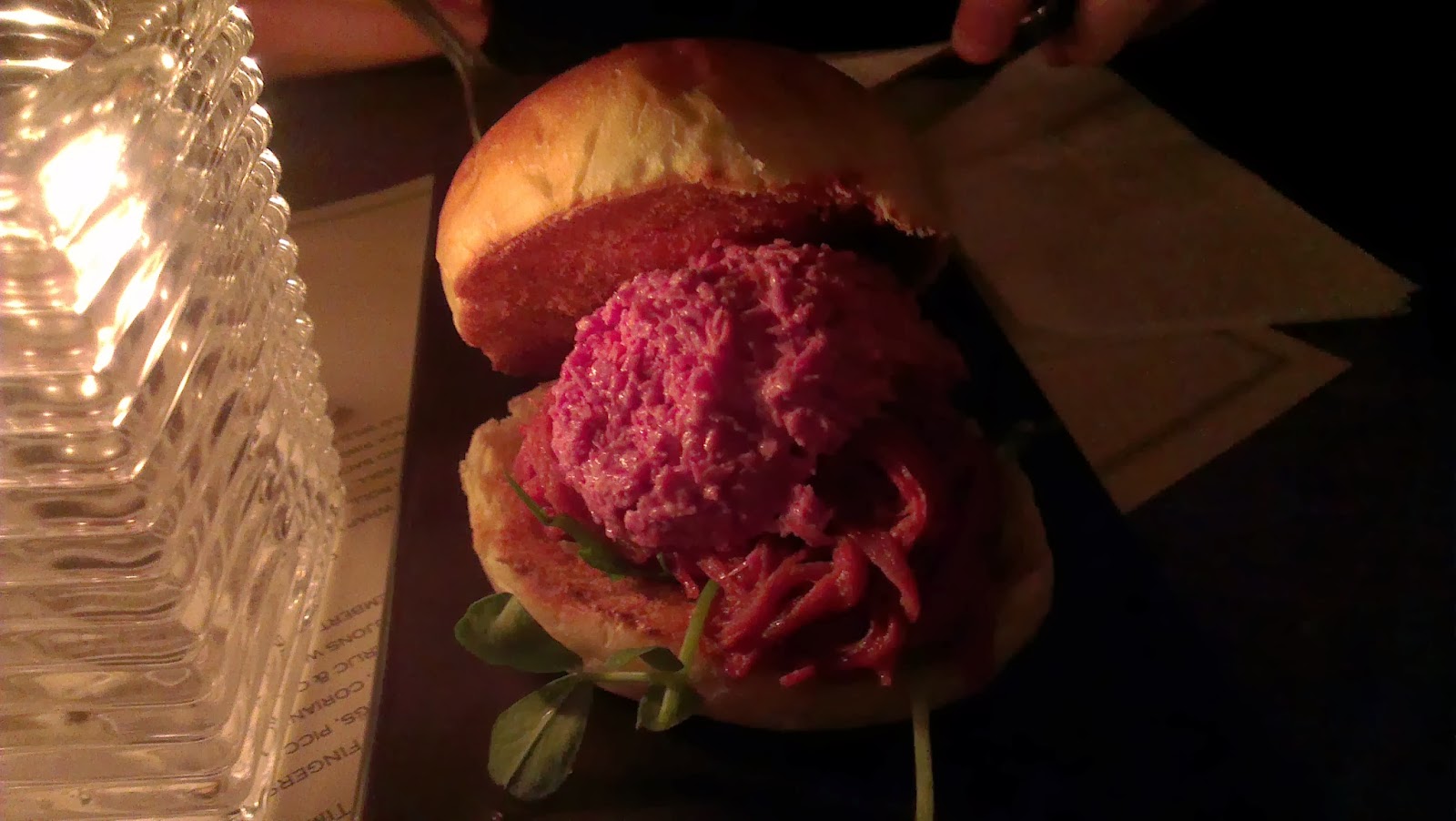 The penicillin was probably my favourite drink of the night, simply for being the most unusual one I had (oh, and the scotch). It also came with a piece of candied ginger on the side, to complement the ginger syrup, which was fantastic. In general, Satan's Whiskers menu is more 'classics done their way' rather than theatrical cocktails with bells and whistles. And the price reflected this with none of them costing over £8. 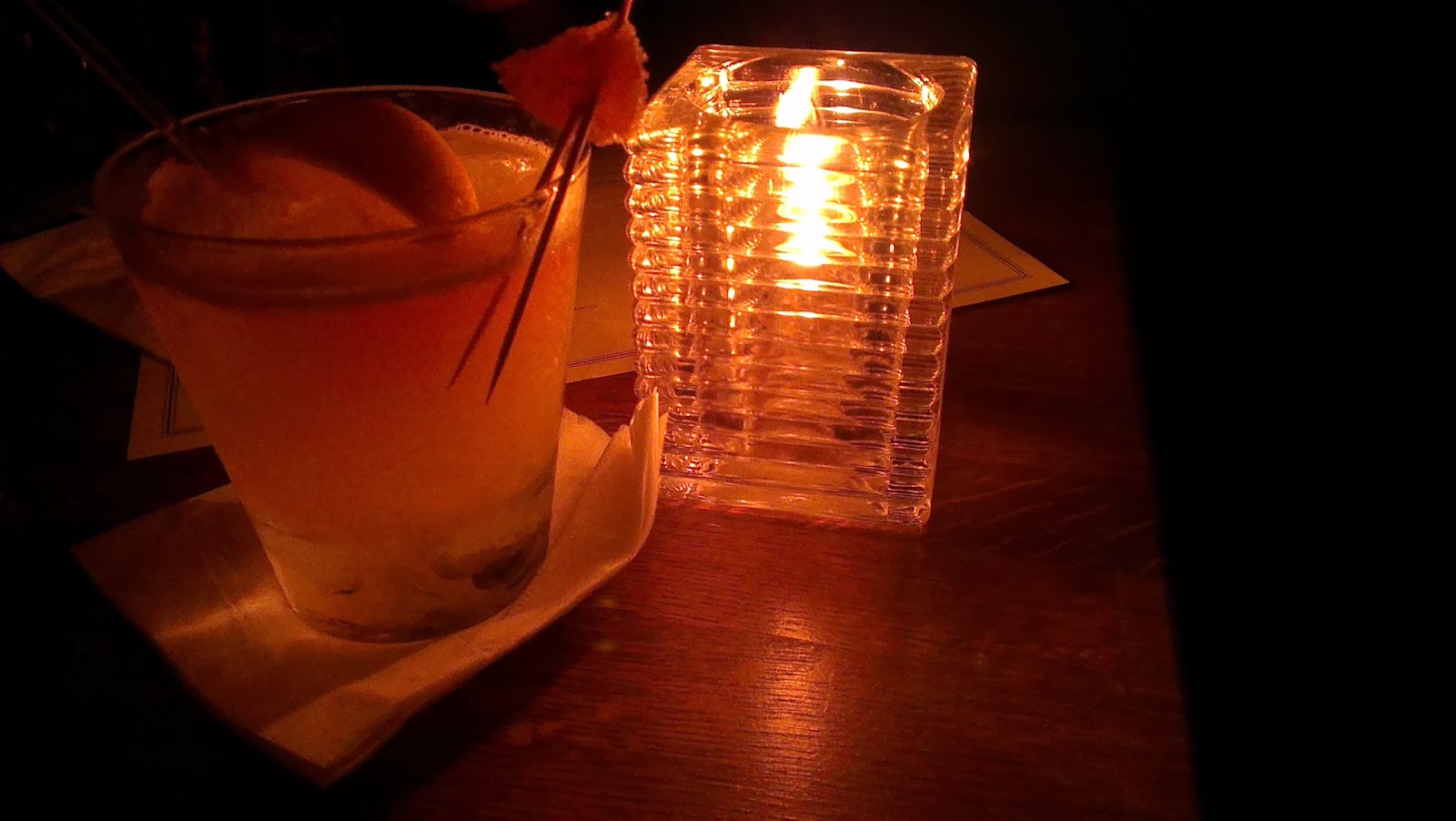 I had started with a champagne julep and Stephen went for the bar's namesake - the Satan's Whiskers. Mine was definitely a step up from a normal julep with the addition of bubbles. I now believe all juleps should be made with bubbles. The Satan's Whisker was like drinking an orange sherbet - albeit one to which a lot of liquor has been added. 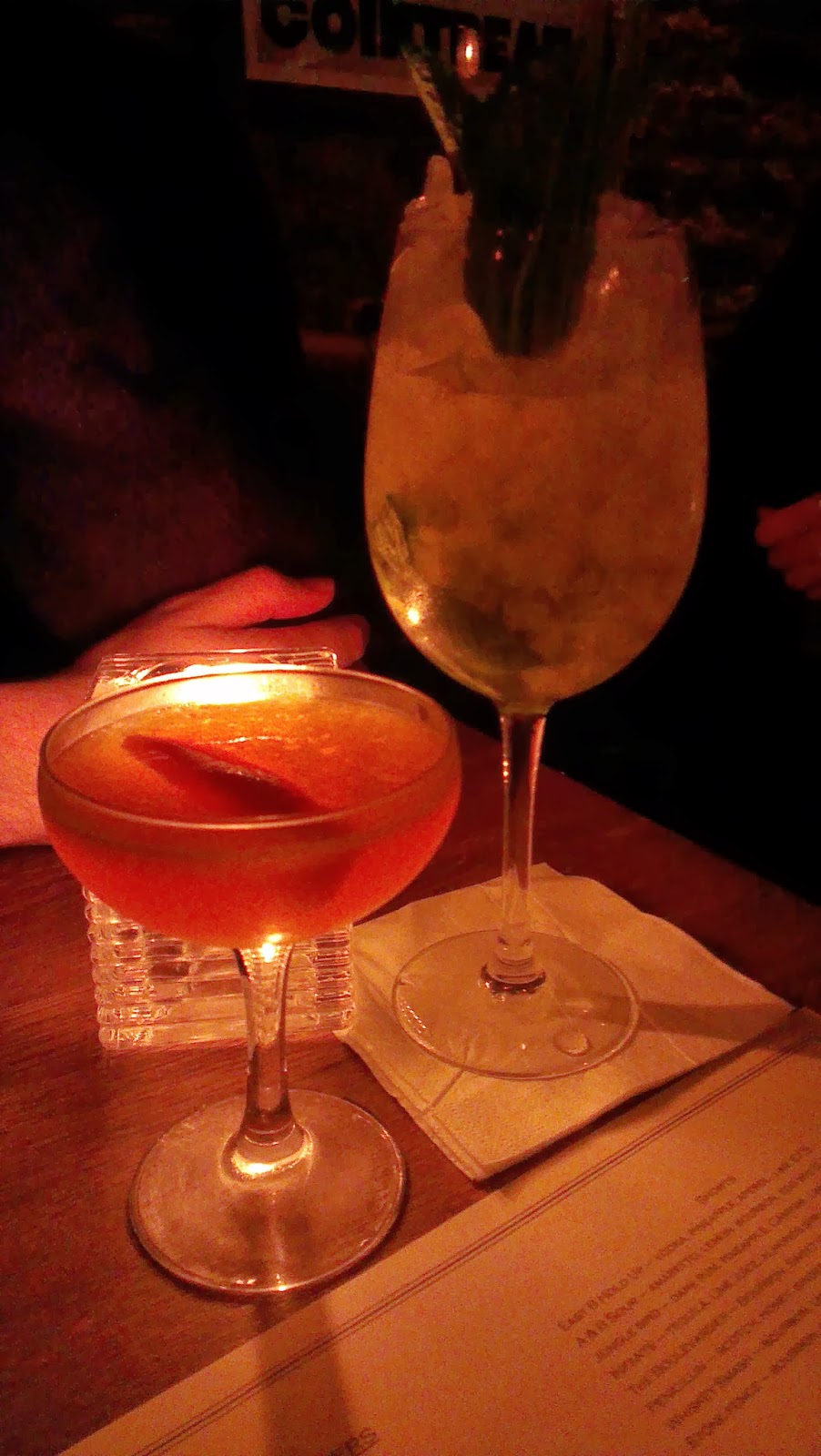 Finally, I had a brandy alexander, which tastewise was my favourite. It was like a white russian but obviously with a brandy flavour (ie with an actual alcohol flavour rather than the typically tasteless vodka) and the nutmeg on it was a nice accent. 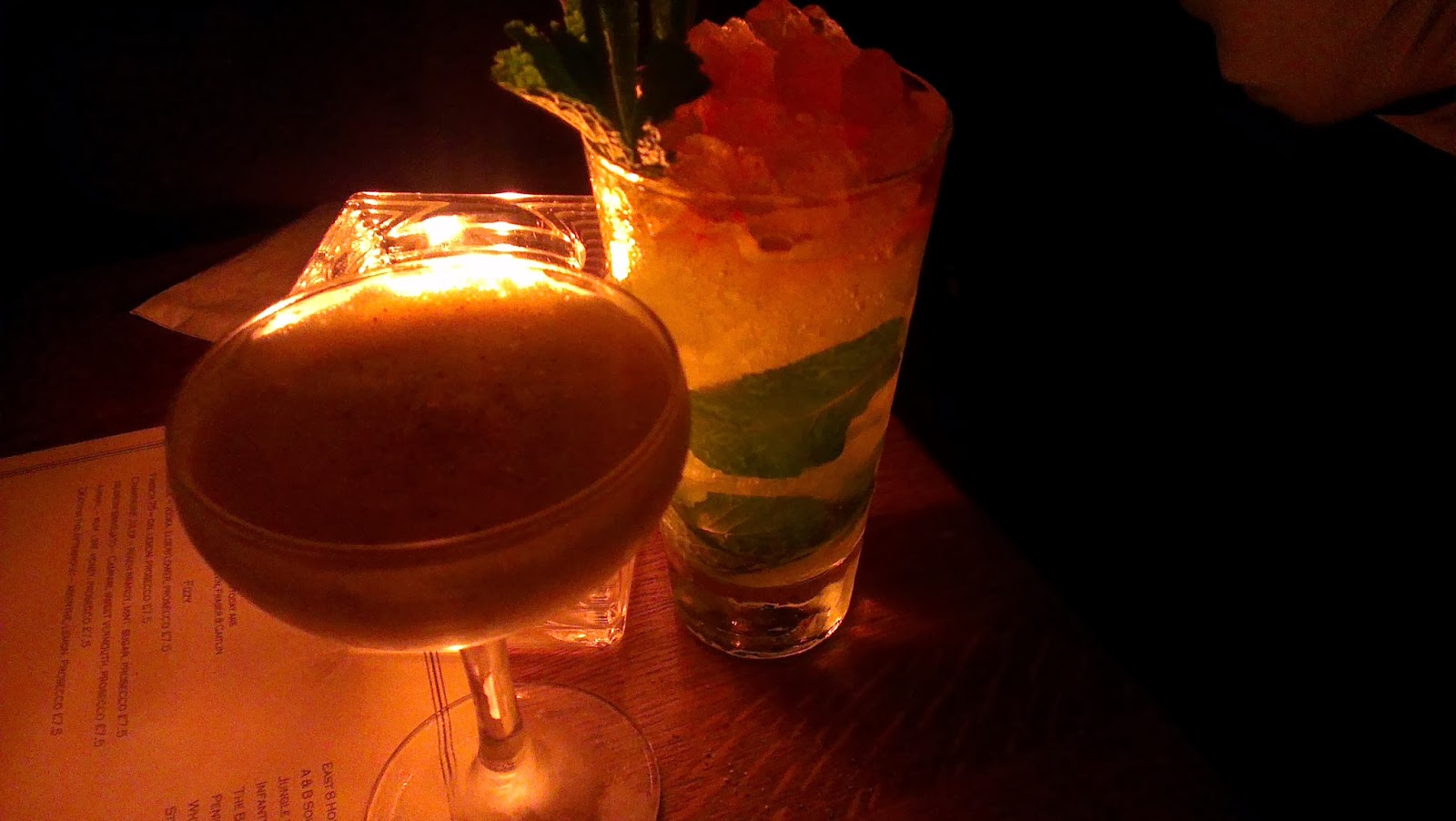 Stephen's last drink was the Queen's Park Swizzle - look how pretty it is! This was pretty much like drinking a mojito (it was rum, lime, mint, and bitters) but with the addition of sugar it was a tad sweeter.

Satan's Whiskers describes itself as a neighbourhood bar, but in reality it is far too trendy to be taken as such. Also, you don't tend to have to wait 40 minutes to get a seat in a neighbourhood bar. But for me that's not a bad thing. It's nice to have such a cool little bar livening up a rather dull and kinda skanky stretch of road. And it's only one stop on the tube from my flat. Sold.

To round off the night we headed to the Old George on Bethnal Green Road, which I hadn't been to before. It kinda smelled a bit but I liked the vibe so we stayed and ended up staying for several drinks. Turns out the place is an Antic pub - who also own Farr's and the BBC in Balham. No wonder I liked it.

Find the menu & restaurant information on Zomato
Posted by Ginglesnuff at 8:55 PM