Pies at The Windmill, 25th February

I'm actually not a massive pie fan. Or at least, I don't think of myself as one, and yet I do find myself picking pies a lot for someone who doesn't eat them.

So, if you are a loyal reader, you may have noted that I have been going out on an almost weekly basis with my friend Alison. We're dating - that is, going on friend dates until she moves back to the States in April. That ill-fated El Vino night kicked it off, and this week was date #4 - pies at the Windmill in Mayfair. Cited as one of the best places in London and with an award-winning pie constantly on the menu, not to mention the fact that Alison had been there ooh a bajillion times already, meant expectation was high. 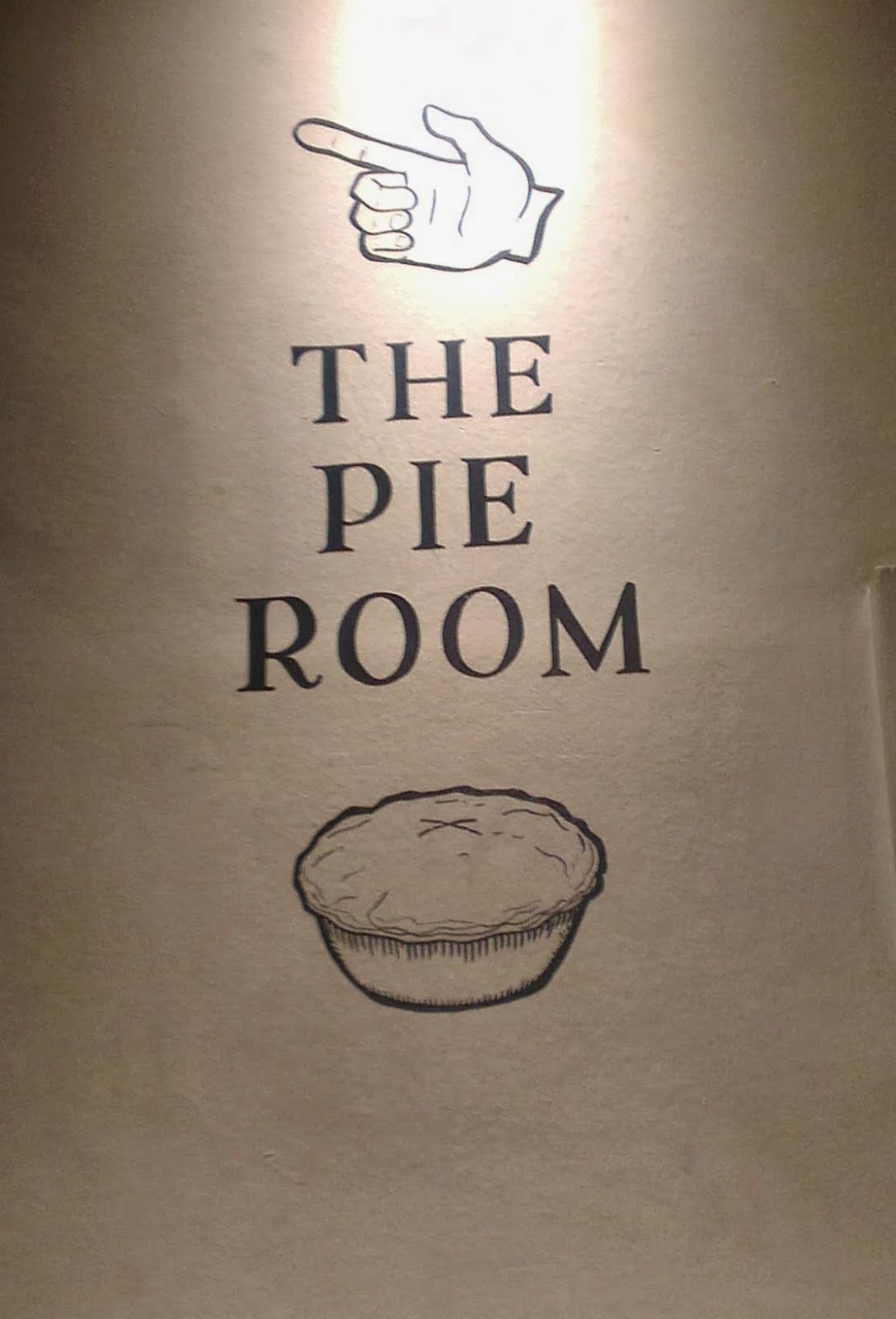 If I was going to have a pie, I wanted a proper pie, which meant choosing from steak and kidney, chicken, bacon, leek and tarragon, or steak and mushroom. The other options were those topped with filo, or those topped with mash (fish pie/cottage pie). Alison thought that the pastry pies came with mashed potato but apparently they don't (despite her photographic proof to the contrary) so we ordered some mash to go with it, and also some baked beans. I had the chicken and bacon pie, Alison had the steak and kidney.

Presentation isn't a strong point. The golden pie is plonked on a plate with absolutely nothing else - not even a side salad garnish. Then the sides we ordered came out in separate dishes for doling out amongst ourselves. 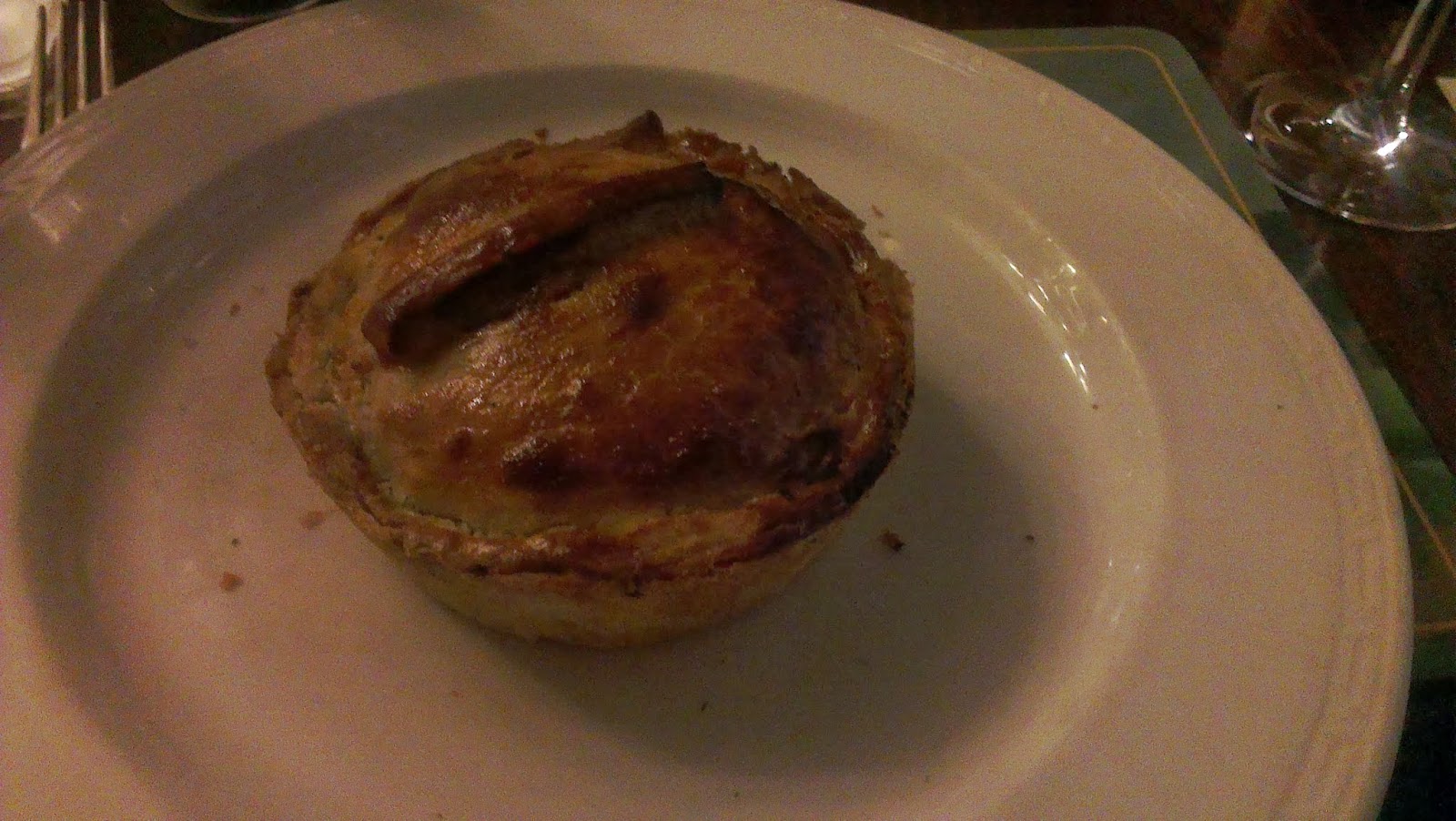 They are good pies. The pastry is a good thickness, solid and well cooked. The steak and kidney pie pastry in particular was lovely as it seemed to have caramelised a bit from the steak juices oozing out (I had a bit of Alison's). Both pies were packed with their filling. The steak pie is so full of meat that there isn't any room for much gravy inside so they actually give you an extra pot of gravy to go with itr .

I was especially impressed by the chicken pie, as for some reason I think a steak pie is more readily impressive - I guess because it has steak in it. Whereas chicken... Well, chicken has to fight for respect. Hearty chunks of chicken were in a well-bodied sauce and lots of bacon throughout as well. 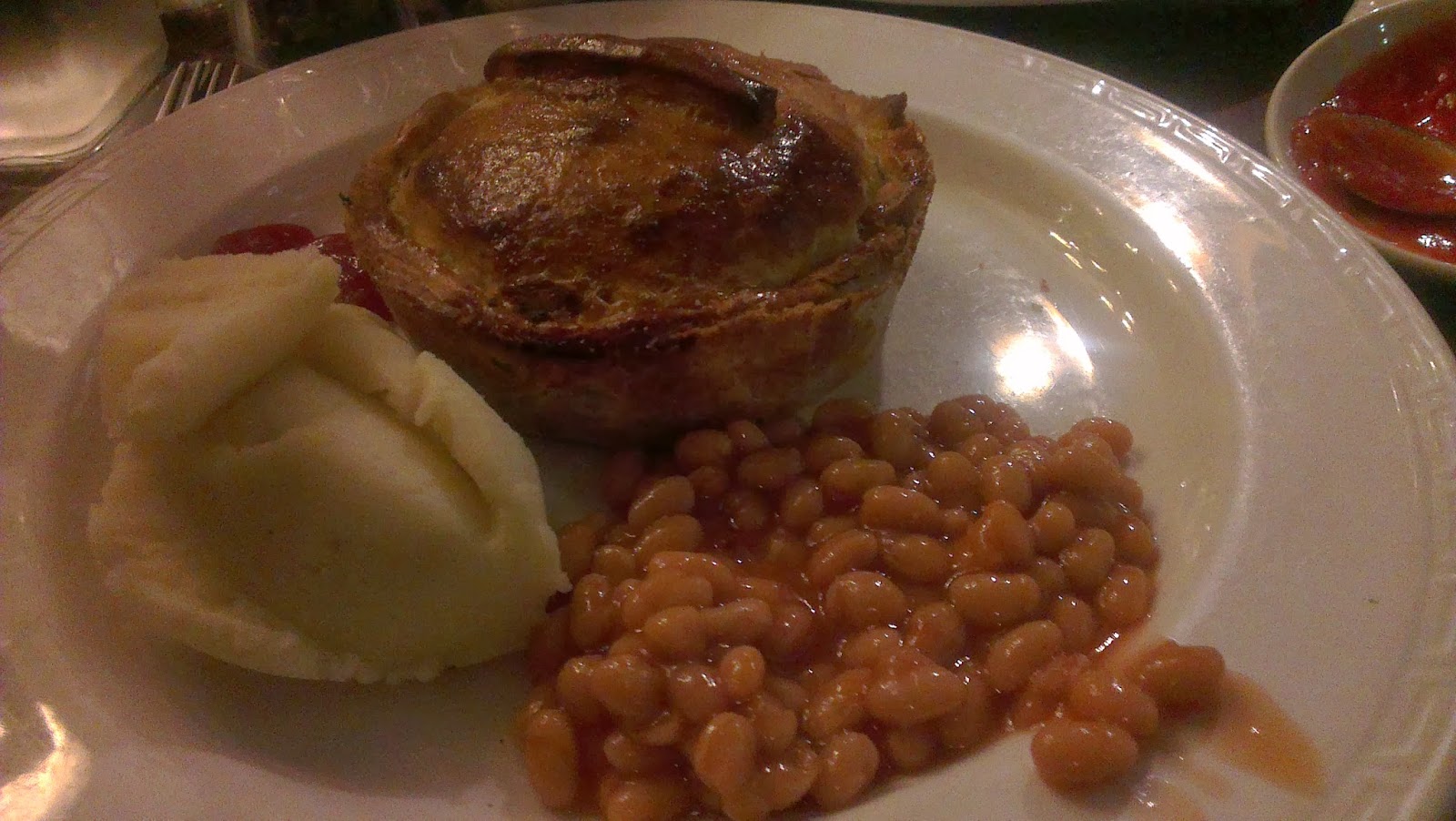 So the pies were good. Didn't quite reach the heights of the pie I had at the Bull and Last but then, they're not supposed to. These are old-fashioned pies in an old-fashioned pub - food for ordinary folk.

The beans were fine - there's not much to say about normal baked beans. The mash was too stodgy in my opinion: all potato and no cream, or butter... no fluffiness... reminding you that you're in a pub without the 'gastro' prefix or any aspirations to gain one.

With the pies being only £9.50 each (up to about £11 for the posher ones), and having a bottle of wine between us, we spent £25 each, which isn't too bad for a very filling meal in Mayfair!

Find the menu & restaurant information on Zomato
Posted by Ginglesnuff at 1:28 PM