Blogging as much as I do drains my wallet and makes me fat but occasionally there is an upside when I am given the opportunity to try something for free. In this case, it may still make me fat but at least it isn't costing me anything.

I was given such an opportunity by Glazed and Confused after tweeting that I'd just picked up some of their doughnuts from White Mulberries. Stephen and I had bought a coffeetoffeenut and a cherry bakewell. There was no sharing as I don't like almonds and he doesn't like coffee. 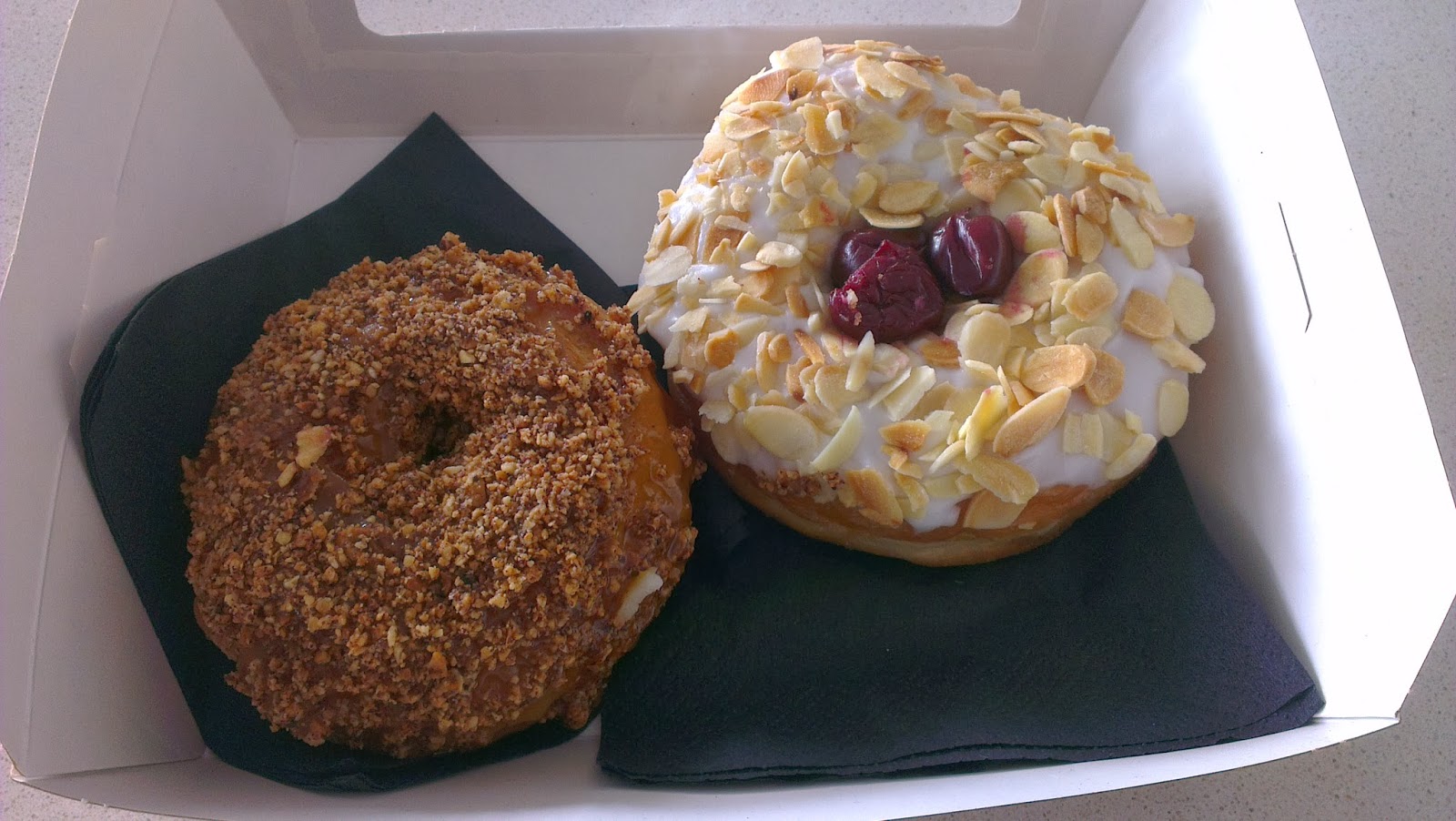 Which I'm pretty glad about as I wouldn't have wanted to give away any of mine. It was chewy and caramelly, and the coffee flavour was actually in the doughnut, not just in the topping. I was impressed. After having these on the Saturday I was eagerly awaiting the delivery to my office on Tuesday.

I was brought six flavours. The lovely guy who made the delivery (one half of the brains behind the outfit) did mention what they were but by the time I'd taken them upstairs I'd forgotten. But through taste testing I deduced I had:

They're not a light, sugary nothingness confection a la Krispy Kreme (though don't get me wrong, I love Krispy Kremes) where you can scoff several before you feel bloated. They're substantial and just one is actually quite filling. They have a dense, chewy texture, that reminds you of the 'dough' they're named for, rather than cake, or an airy mouthful of grease and too much sugar. Doughnuts are pretty ubiquitous in the States but Glazed are trying to do them their own way by creating flavours that will appeal to English sensibilities. These are adult doughnuts with some grown-up flavours. But that doesn't mean they don't have a fun side - whoever dreamt up a doughnut/pavlovla hybrid clearly has a playful heart. 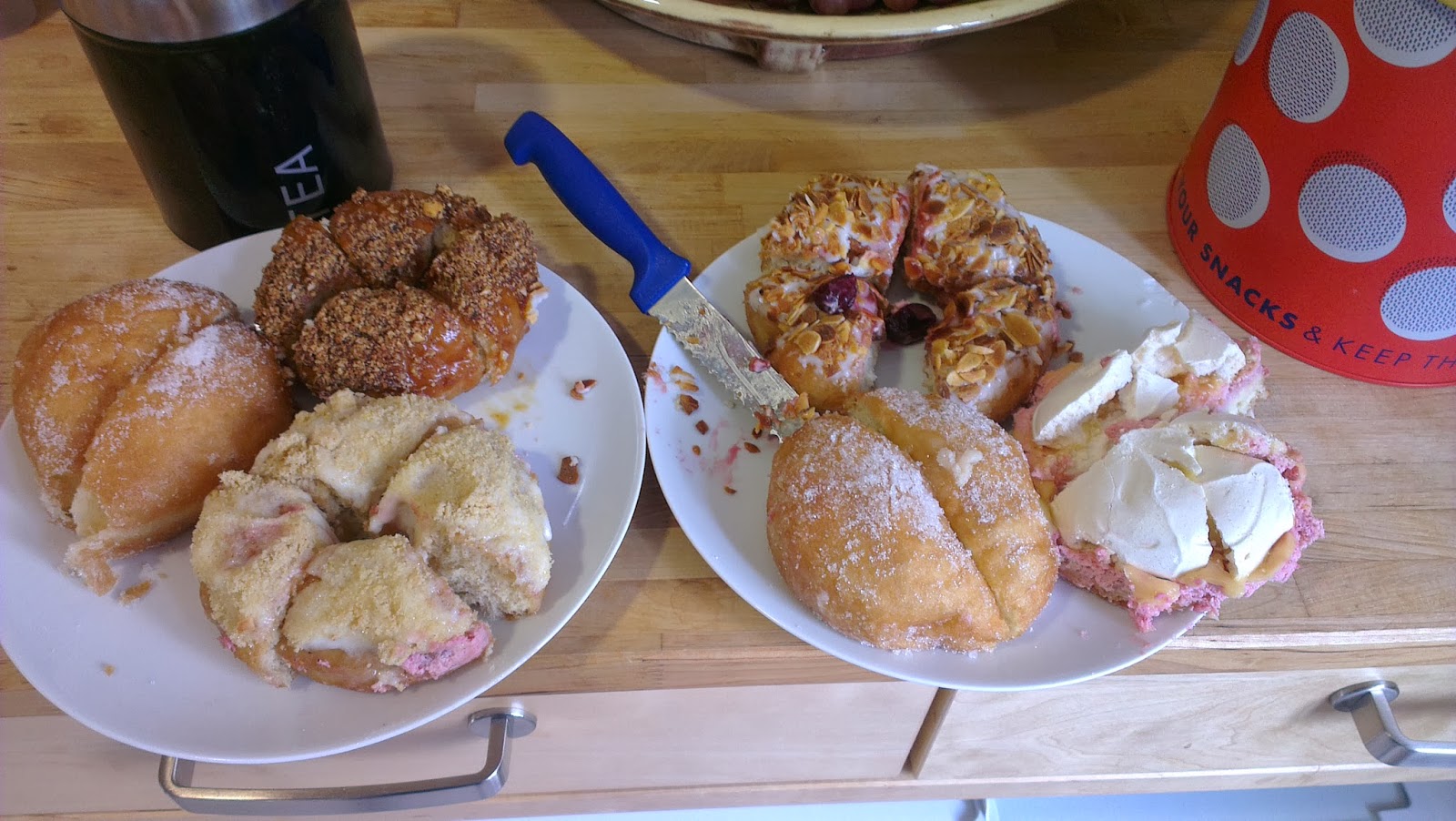 I truly liked them all and they received positive murmurings from my colleagues as well. Its hard to pick a favourite. The raspberry pavlova was amazing, with lovely chewy meringue on the top and raspberry cream in the middle, if quite messy to eat. But I think the ginger might take the crown. I had thought it was just a regular vanilla flavoured doughnut so the flavour took me by pleasant surprise and I loved its spicy, ginger warmth.

I prefer ring doughnuts but if a filled doughnut was my bag then the lemon curd one would have been my favourite. A good amount of sharp, zesty lemon filling.

The rhubarb doughnut was one of the weaker ones. In fact, it's a rhubarb and custard doughnut but I didn't see any evidence of custard. I didn't think the rhubarb flavour was strong enough, I wanted more of that sharp rhubarb tang, although perhaps it was diluted by the custard flavour being mixed in.

I didn't try the cherry bakewell doughnut myself, but from the feedback this one was also not the strongest offering. One person didn't think almonds really belonged on a doughnut, and my boyfriend thought there could have been more to it – that it was a bit plain with just almond flakes and a couple of cherries on top. Maybe it would be better as a filled doughnut with cherry jam inside. 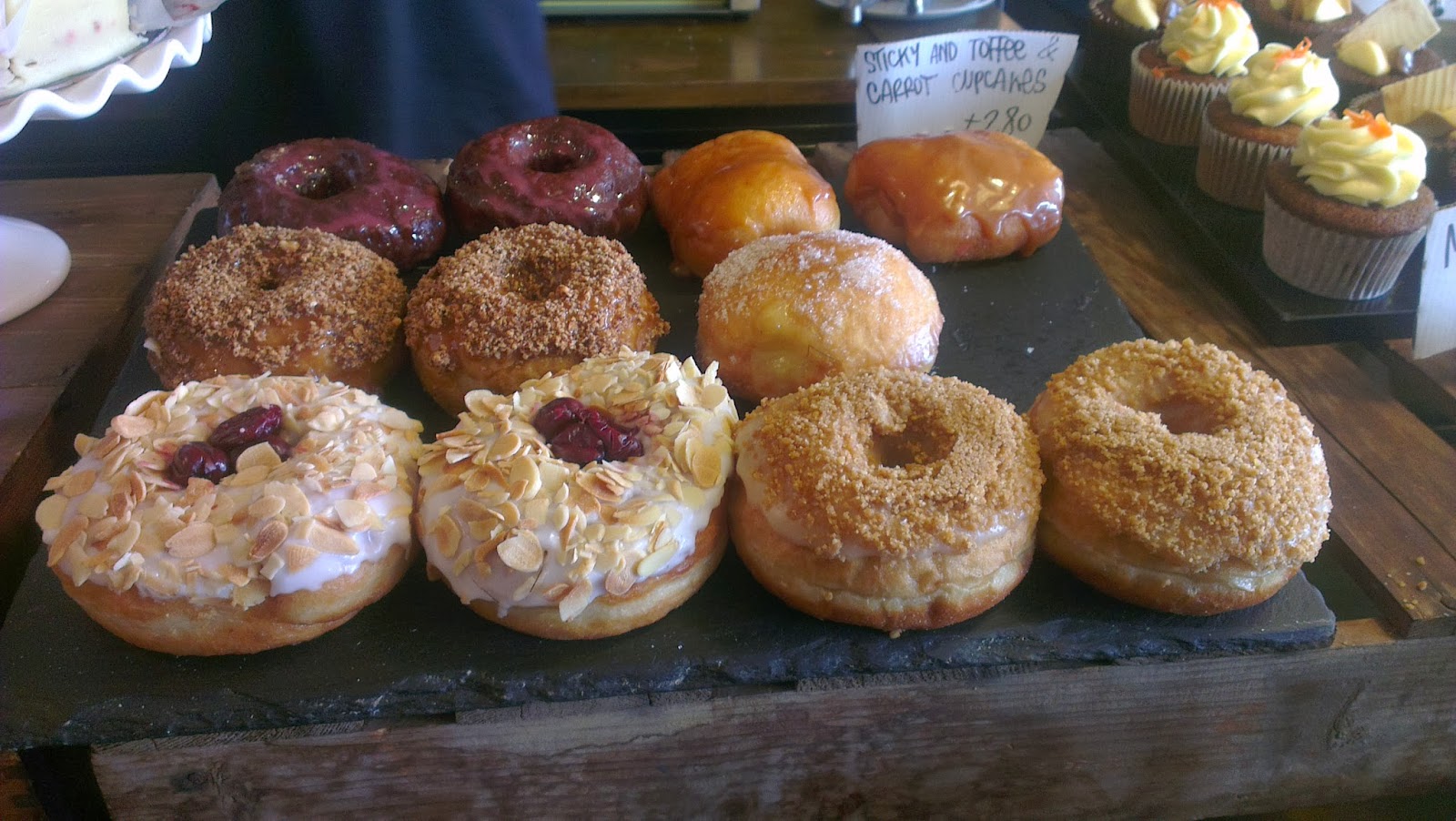 I have noticed a spate of doughnut vendors popping up in the wake of Glazed and Confused – Dum Dum Donutterie and 1235 Doughnuts, both based in East London. I haven't yet tried either so I can't compare. However, if they're even halfway equal to Glazed's doughnuts then Londoners are in for a treat.