NOLA bar, Made in the Shade, 6th March 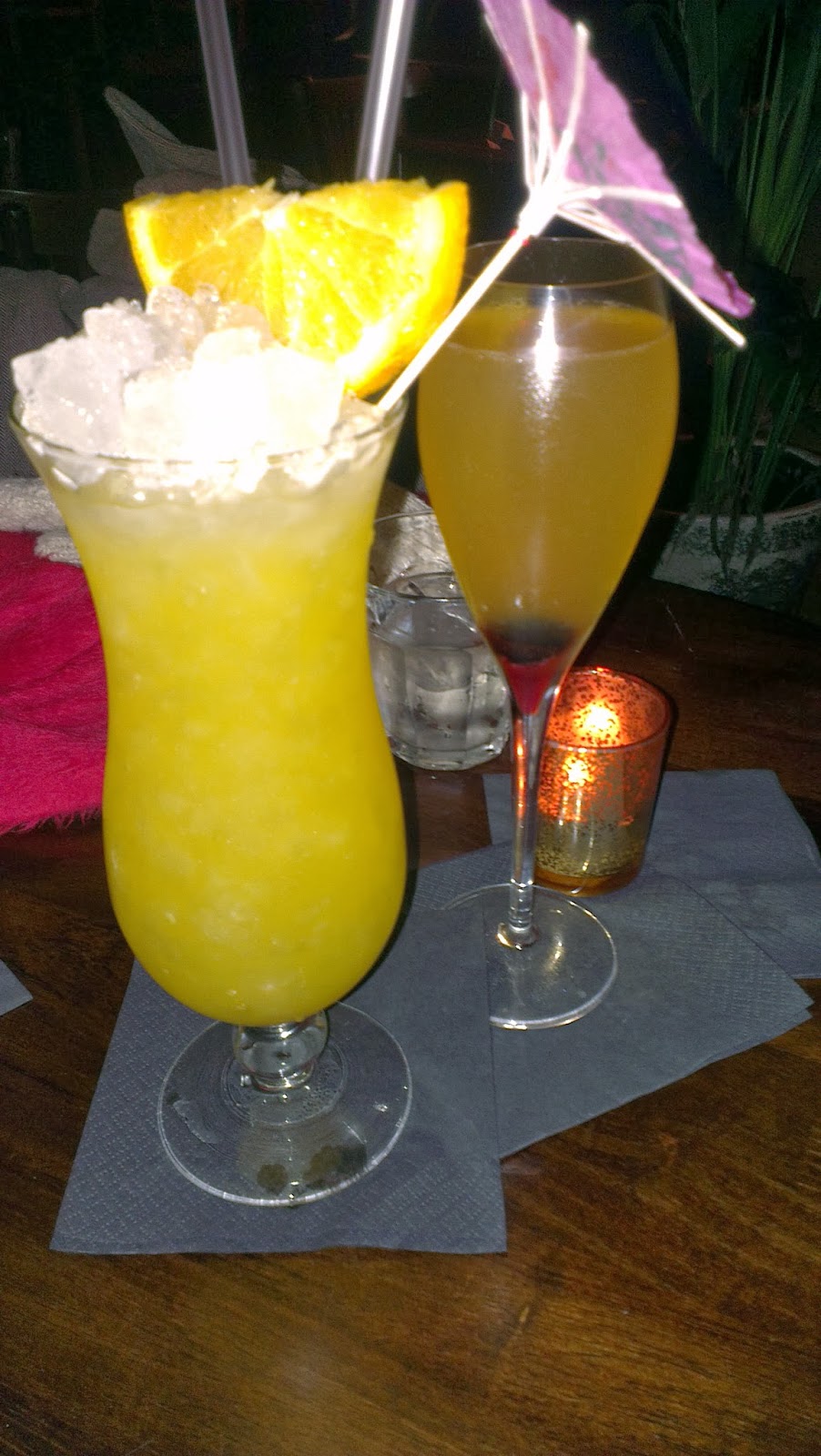 One of my best friends and his boyfriend are in New Orleans for Mardi Gras, and not wanting to miss out I thought we might as well finally check out NOLA bar before our dinner. After rather embarrassingly taking the wrong set of stairs (note - if you are walking up a rickety set of stairs thinking they seem too dangerous for people who may be drinking, you're probably in the wrong place), we found the bar. A few tables were reserved but there were plenty of places available. The bar says it is table service only, but one of the groups in there had congregated around the bar. We only had time for one drink and it was hard to pick one out of the many on offer. I noticed a lot of gin, a LOT of rum, and quite a bit of absinthe.

Finally I went for a classic of sorts and one very fitting (sorry!) for New Orleans - the Hurricane. Alison had a French 75. Pitching our choices against each other I'd say she won. Mine was a little too fruity and tropical for my tastes, although it's nice to have an 'umbrella' cocktail now and again. Alison's was fruity but the champagne gave it an elegant dryness, and at the bottom was an alcohol-soaked cherry. Can't go wrong with that.

Even in the short time we were there I was impressed with the friendliness of the staff, and even though it was table service, service wasn't automatically added to the bill. Which made me want to tip them but I didn't have any more change - so, NOLA, if you're reading, my apologies!

Made in the Shade

After NOLA bar, we headed over to Made in the Shade, the newest additon to Hoxton Street, which is quickly becoming another cool destination in its own right.

We only had one cocktail each - Alison had the Shady Maid Lemonade and I had the Ultimate F*cking cocktail as recommended by our waitress. It was whiskey with rum, ginseng liqueur and Guinness foreign extra syrup. Sadly they had no Kamm & Sons ginseng liqueur but I didn't think that would be a problem. 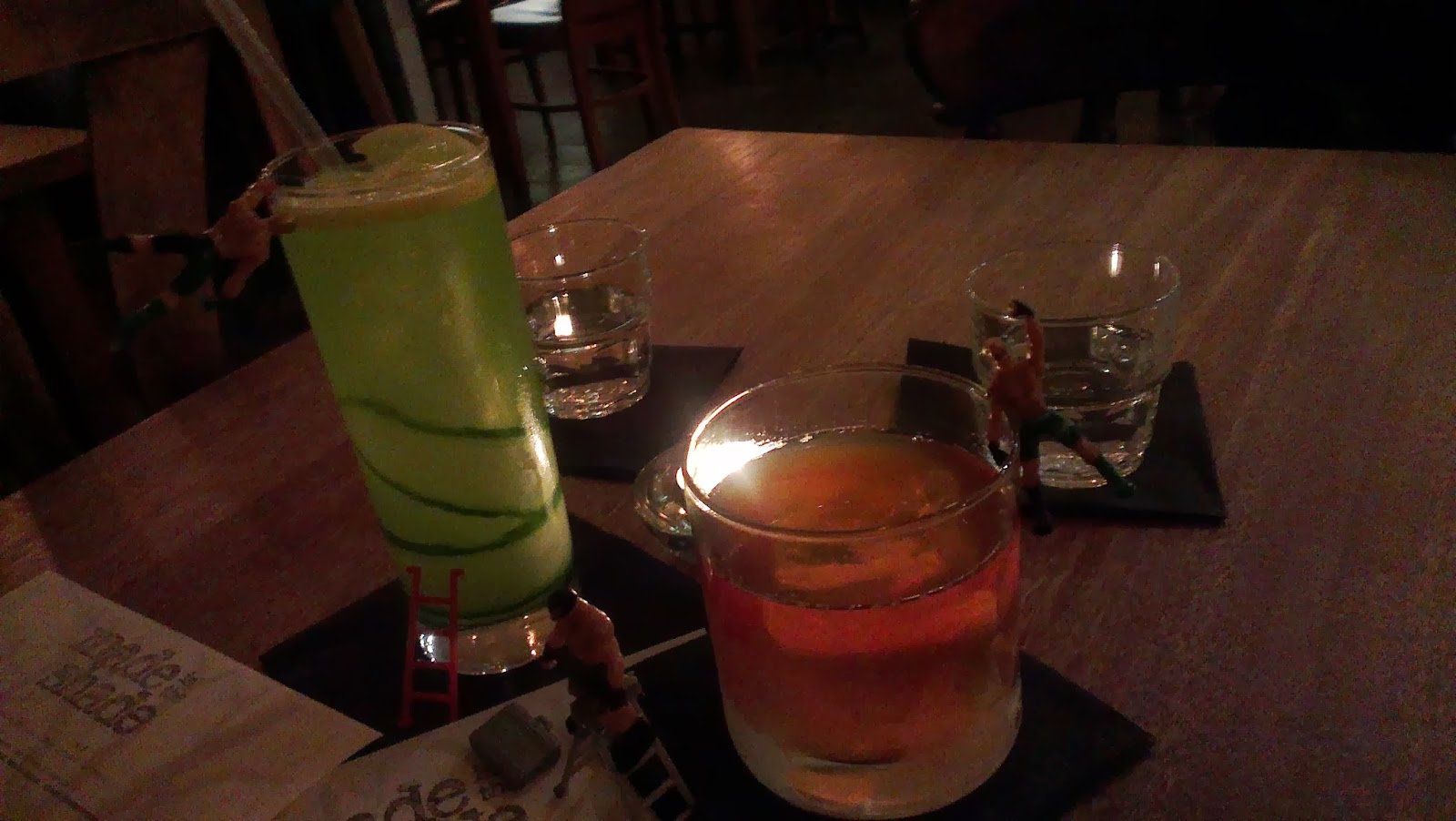 So, was it the ultimate cocktail? For me, no. As far as short and strong whiskey drinks go, I would choose the Full Fat Old Fashioned from Hawksmoor or the Manhattans Project's Fake Orgasm over this. But it was a good drink with a smooth blend to its flavour, strong but not make-you-cough strong, and the Ultimate Fighting Champion it came with was very cute. I actually was more impressed with the drink Alison got – they blended cucumber juice with lemon juice and citrus peel syrup to create a really refreshing drink that had a Pimmsesque flavour without the sweetness. Quite sophisticated. And so pretty! 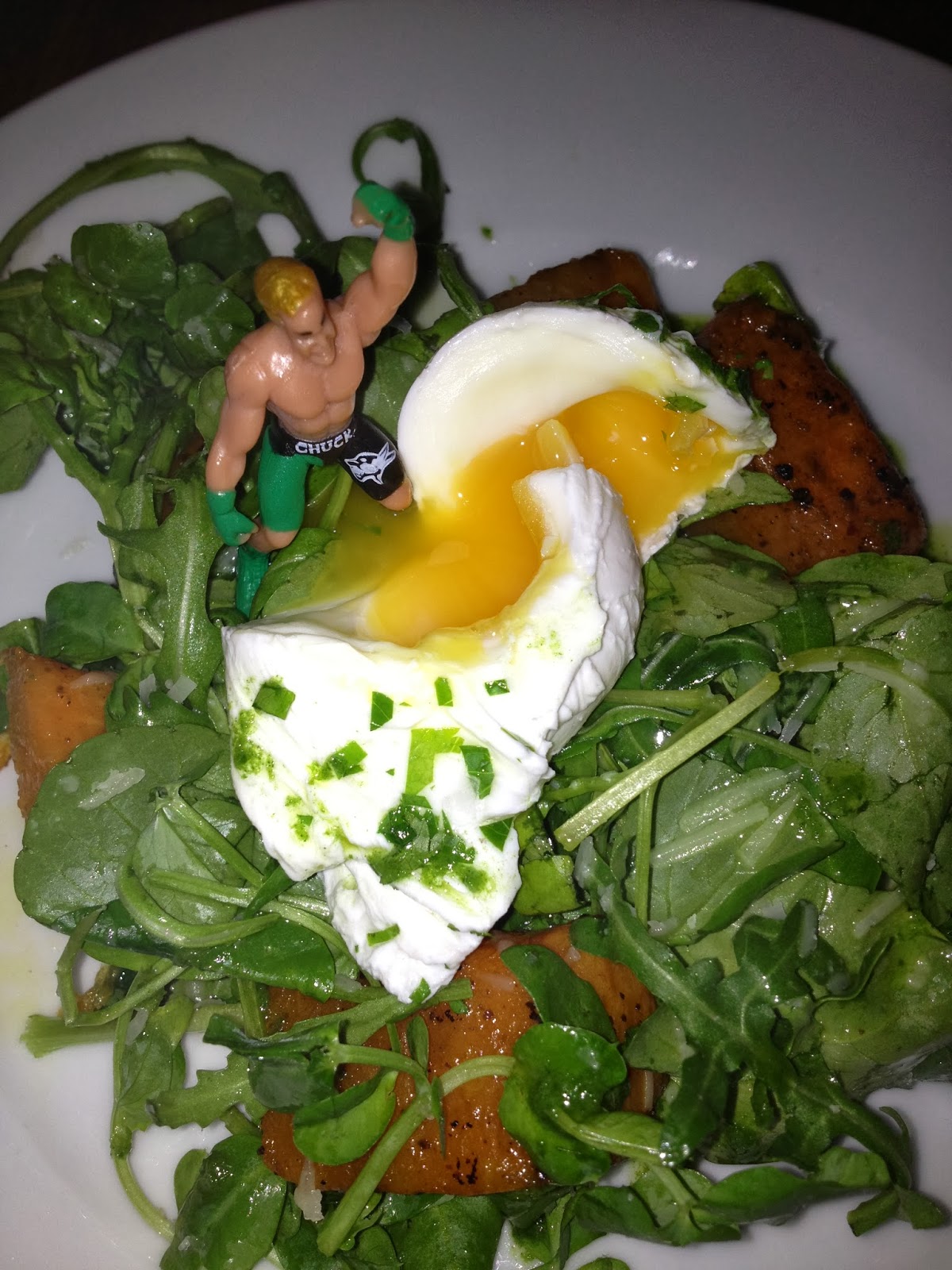 The food was nice too, but wouldn't leave me raving, although perhaps if we'd tried one of their main dishes, which were more obviously Caribbean-influenced, I would have a different opinion. First we shared a salad of pumpkin, poached egg and rocket. The egg was cooked perfectly and if you thought pumpkin and egg didn't go together, you're wrong. The pumpkin for me was undercooked though. I haven't really had pumpkin much before, perhaps it's supposed to be like that, but I thought it would be cooked to the texture butternut squash takes on when it's done well. 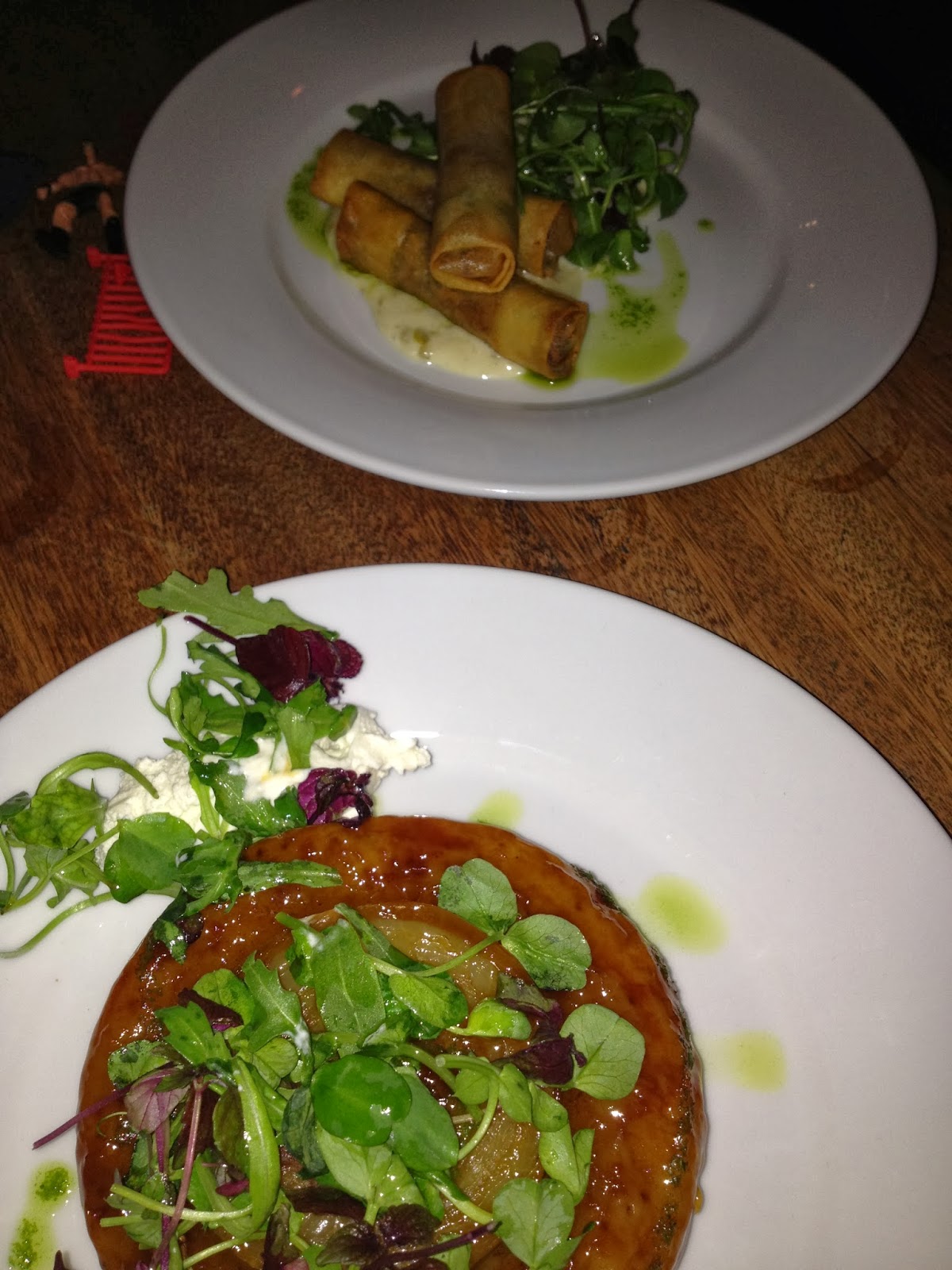 We then shared a caramelised onion and goat's cheese tart, and some oxtail spring rolls. When we requested some condiments, a really delicious sambal was brought out, with some sweet chilli sauce. The ox tail spring rolls were exactly that - completely packed with meat and nothing else. They were pretty good but I couldn't get the idea out of my mind that having one big fat one, maybe mixed with some veg would have been even better. 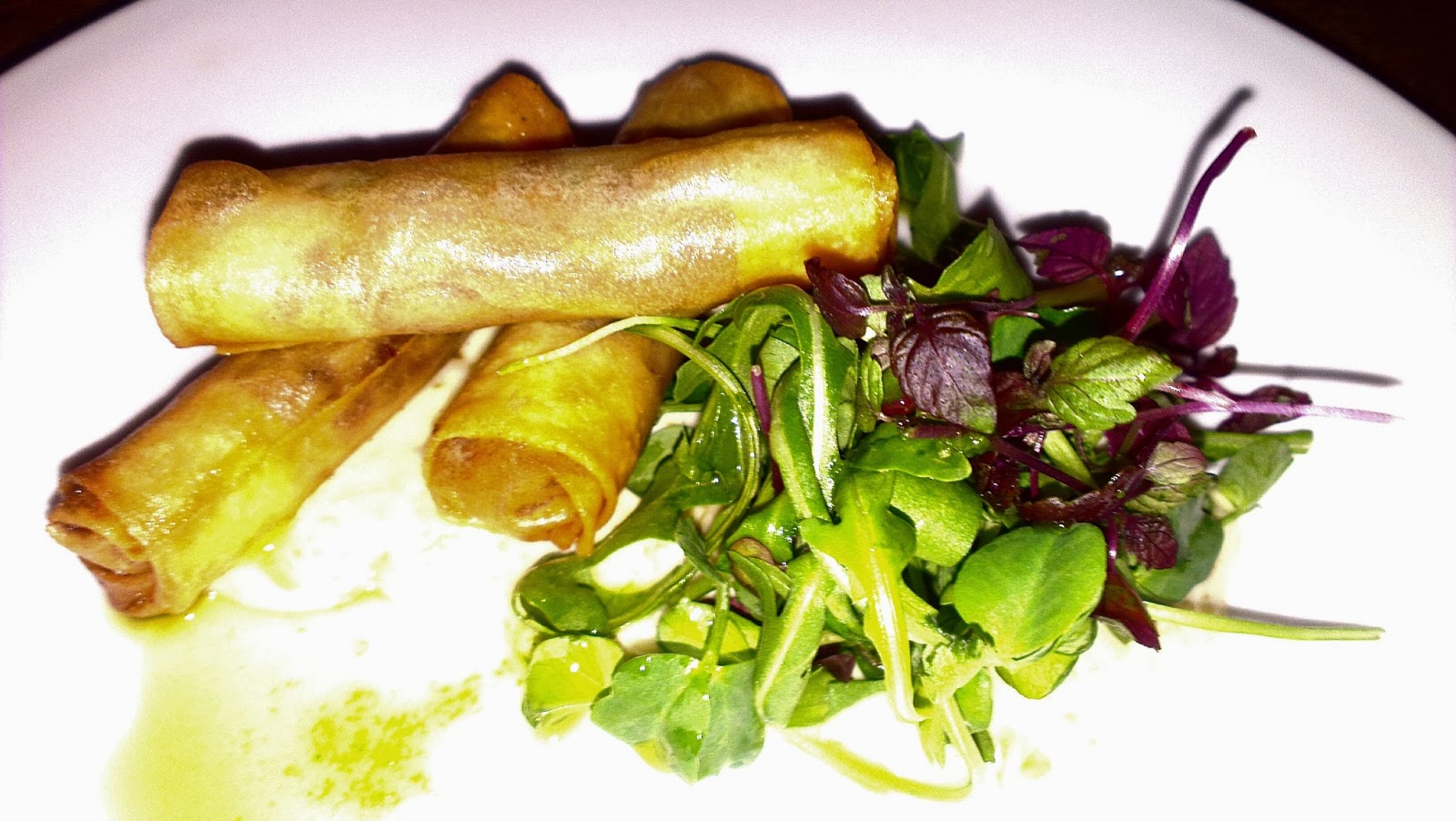 The caramelised onion tart arrived with the goats cheese sitting atop. I was really impressed with this. Inside the pastry a whole bulb of roasted onion sat, and it wasn't at all overly sweet like some caramelised onion tarts can be. I would say there was exactly the right amount of goats' cheese to accompany it – so often you can have too much and it overwhelms anything else. 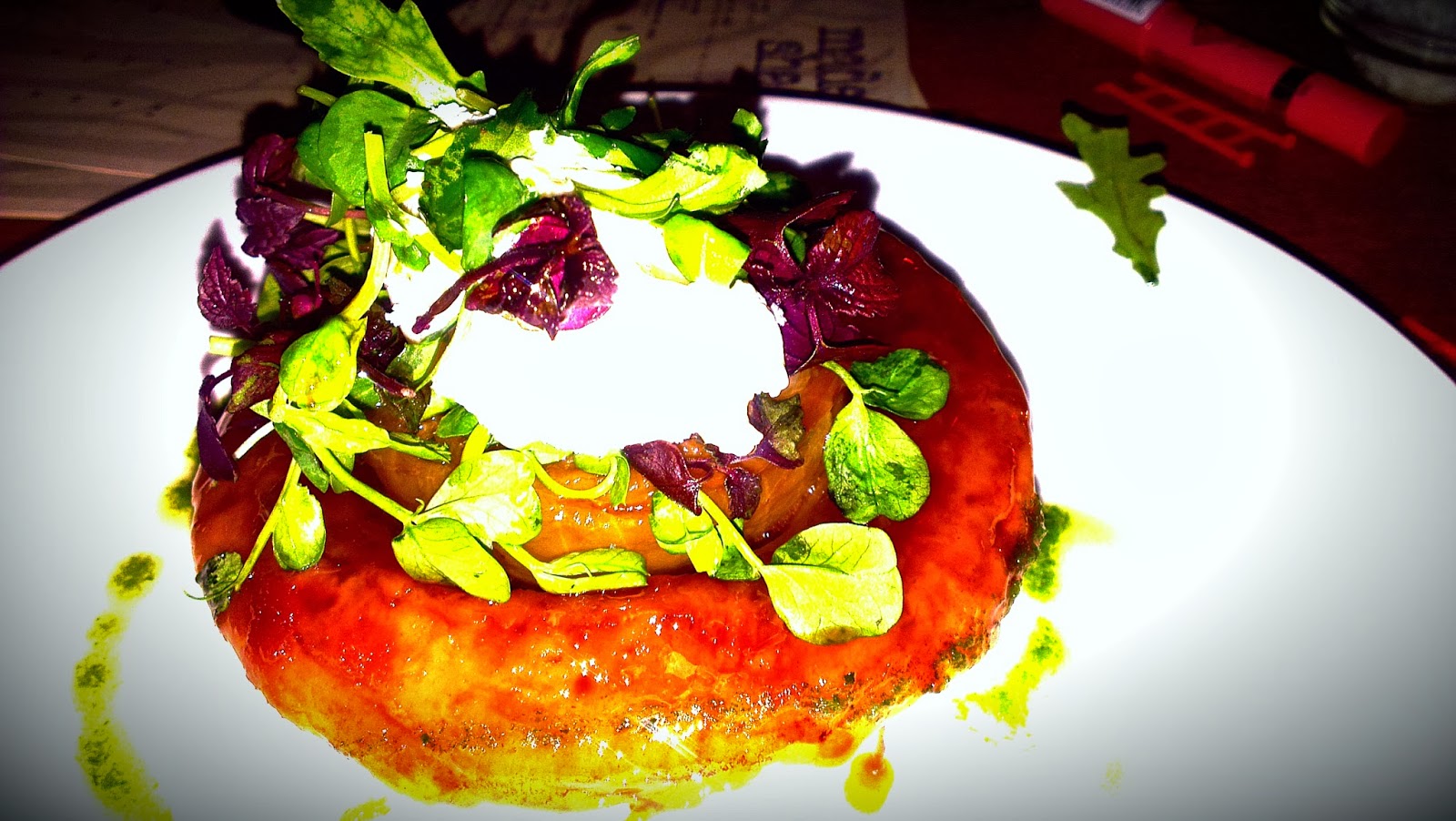 We had a couple of glasses of wine after our cocktails. Warning - the prices are instantly appealing but you don't get very much for them. Buying bottles here is the smart move. I unwittingly ended up trying a red and a white. Unwittingly as I thought I had ordered the 'Friendly' white wine from Sonoma but a red one turned up. Nevermind, I made up for it by ordering the Granbazan Verde - how could you not with a description like that?!

There's a healthy dose of fun and silliness at Made in the Shade as evidenced by the little wrestler adorning my cocktail (and we were given some more to play with), the wine descriptions (see above) and the way our bill was presented (see left). The bar is lovely – it does still feel like the pub it used to be, rather than a cocktail bar, but has been spruced up with some interesting (and slightly disturbing) artwork on the walls and pillars. Our waitress was almost alarmingly friendly, spending a lot of time with us, chatting about the various options, recommending things, and telling us about the artwork. I feel churlish saying so, but it was perhaps a little too much attention - at one point I almost felt like we were going to have to catch her up on what we'd chatted about so far so she could join in! So, while the drinks and the food didn't leave me gushing, I know I will be returning to this place, simply because it was so damn likeable, and as they've only just opened it can only get better.

I have been loving the fact that all of the places I've been to lately have a reservations policy. Although we wouldn't have needed one when we went – the place only had a few other customers when we turned up, although there was a steady trickle of people arriving as we made our way through our food and drinks. It had a pretty casual, relaxed feel about it, much like a pub would on a Sunday afternoon. It will be interesting to see if and how that vibe changes on a Friday night or as more people discover the place.