The Moth is a hugely popular import from NYC – and downstairs at the Book Club seemed the perfect place for it. The Moth, is a story slam. That’s right. You’ve heard of poetry slams I’m sure. Well the same construct is applied here, but to stories. Real stories told by real people. Ten people, who volunteer on the night. And then they are judged. They are judged by other people who volunteer on the night. And, as long as you get enough people brave enough to tell their story, it works really, really well.

I imagine that getting people up on stage to tell a short, 5 minute story (you get timed) isn’t such a problem in the States where everyone is eager to have their time in the spotlight. Over here, at the event I went to, it required a lot of cajoling. Or maybe it was because the subject was Blunders and basically meant telling embarrassing stories about yourself. Actually, I suspect a lot of people went with the intention of telling a story, they just needed to work up the nerve to do it once they got there. It turned out that 12 people signed up in the end, so two people didn’t get to share their tales of shame. The order is picked completely at random so you can’t sign up safe in the knowledge that 10 people have signed up before you. You could even end up first on stage. 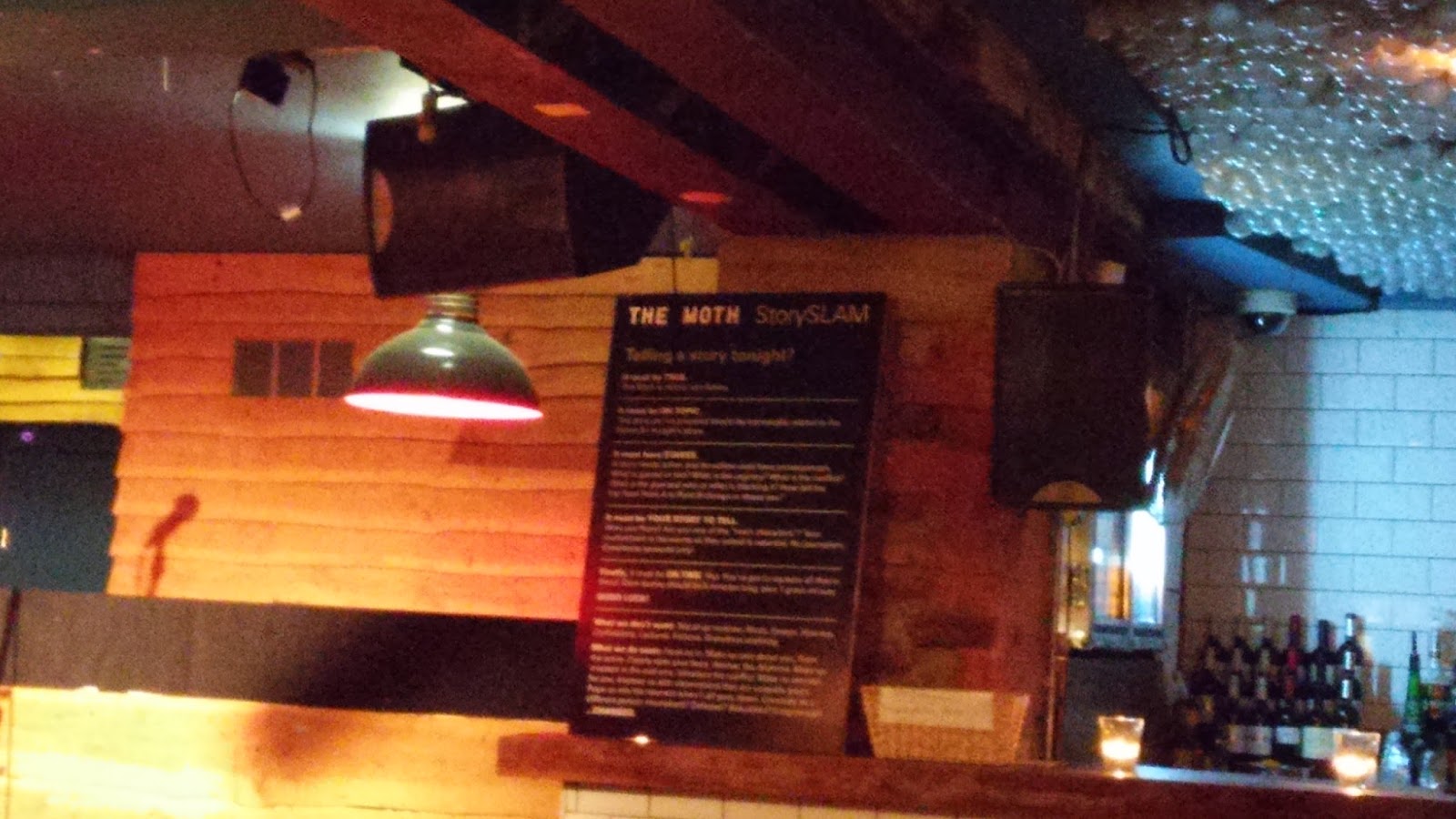 None of my group were brave enough, or could think of a story that could be eked out to the full 5 minutes, to put our names in the hat. But, if you are shy, there is another way to contribute: anonymously.

Everyone who attended was asked to write an answer to the question “What is a mistake you won’t make again?” on a piece of paper. These were read out, at random, every now and again to break up the storytelling on stage. Most of them were pretty snappy and hilarious, making me regret even putting in a submission. As the evening wore on I thought I would get away without mine being read but just before we left Charlie Partridge, our host, said he’d like to do one more and it was mine! Great relief, then, when it got more than a few laughs. 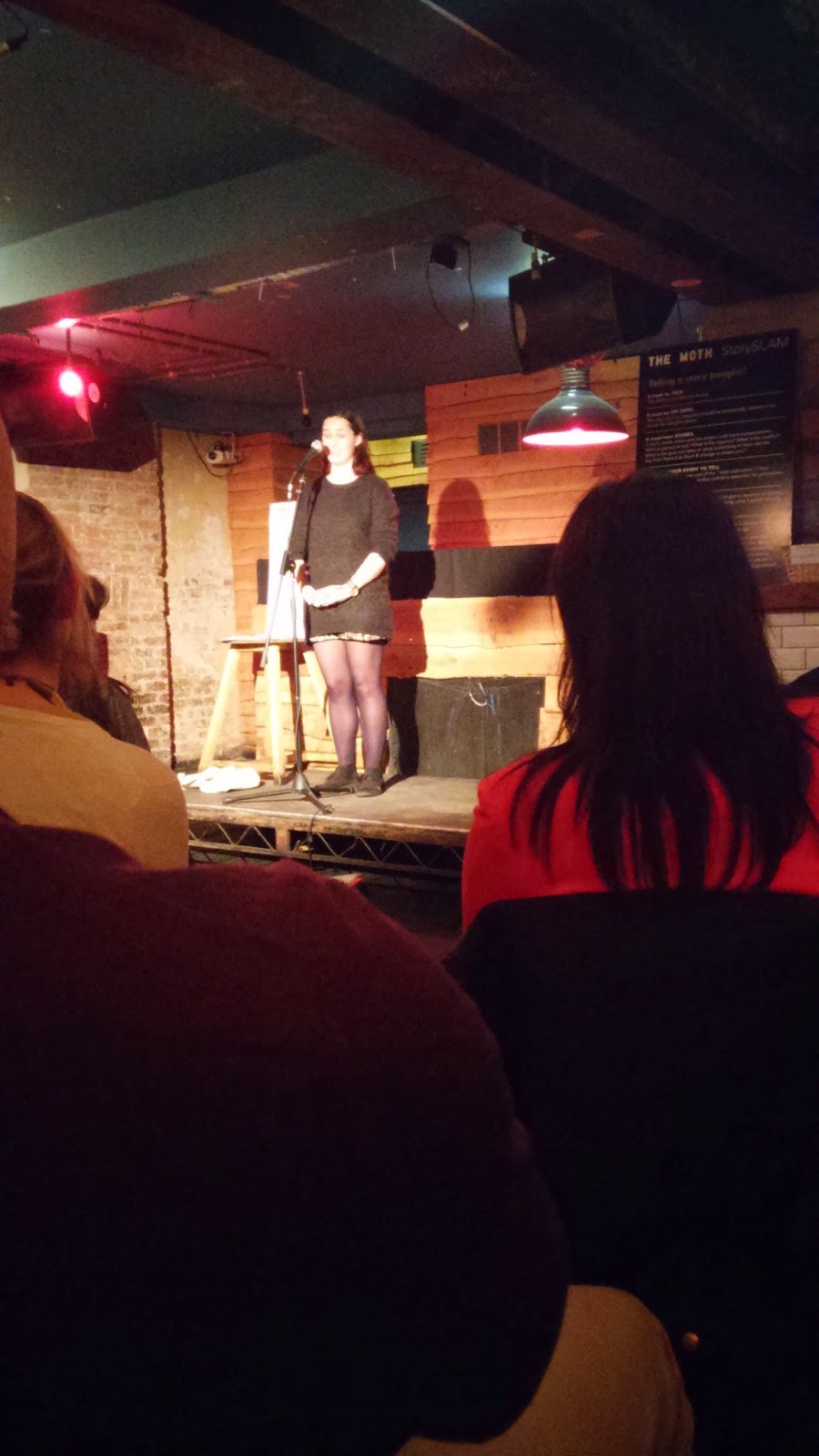 But, having said that, by this time the audience was well and truly warmed up. We had been treated to all sorts of mishaps ranging from being proposed to and saying yes when you didn’t mean it to taking a shower when your mates are on safari and narrowly missing a lion entering your bedroom to not noticing it was Jude Law you were serving so stroppily under a hangover.

As ever, with amateurs, the raconteur quality varied but most of them were pretty good at telling their story. They all did fit the theme and none of them were particularly boring. The best, by far (and happily the one that won) was a very simple story. It was the story of the most expensive apple in the world. Because did you know that when you order online at Tesco you get charged £6.50 delivery? Yes, even if, by mistake, you order a single apple, which is what one speaker did. Such a simple mistake, one we could all imagine doing, with such embarrassing fallout – having to take delivery of said single apple, for example, and live with the shame of having paid so much for it. It spoke to us all. And Holly’s comic timing was spot on.
The Moth is now on monthly at The Book Club and I would recommend it. It’s not perhaps as soul searching as Natural Born Storytellers can be, but it was a lot of fun.
Posted by Ginglesnuff at 12:43 PM

Email ThisBlogThis!Share to TwitterShare to FacebookShare to Pinterest
Labels: alternative nightlife, Shoreditch, storytelling, The Book Club, The Moth, things to do