My bestie was in town, which had been the perfect excuse for lunch at the Wine Library, and was an excellent excuse for hitting the town later that evening.

First stop was our favourite little pub, Ye Olde Mitre, tucked out the way near Chancery Lane. We almost always go here for at least one when we go out in central London, and I take people there all the time. You can’t find a better specimen of a proper English pub with real history. And the wine is good too.

Next up – Bar Polski. This is a Polish bar that focuses on their favourite tipple – vodka. A bit like an indie version of Revolution, this bar has every kind of vodka you can imagine in terms of flavours. I don’t know where they get them from – whether they are in-house creations or not, but the range is certainly innovative. 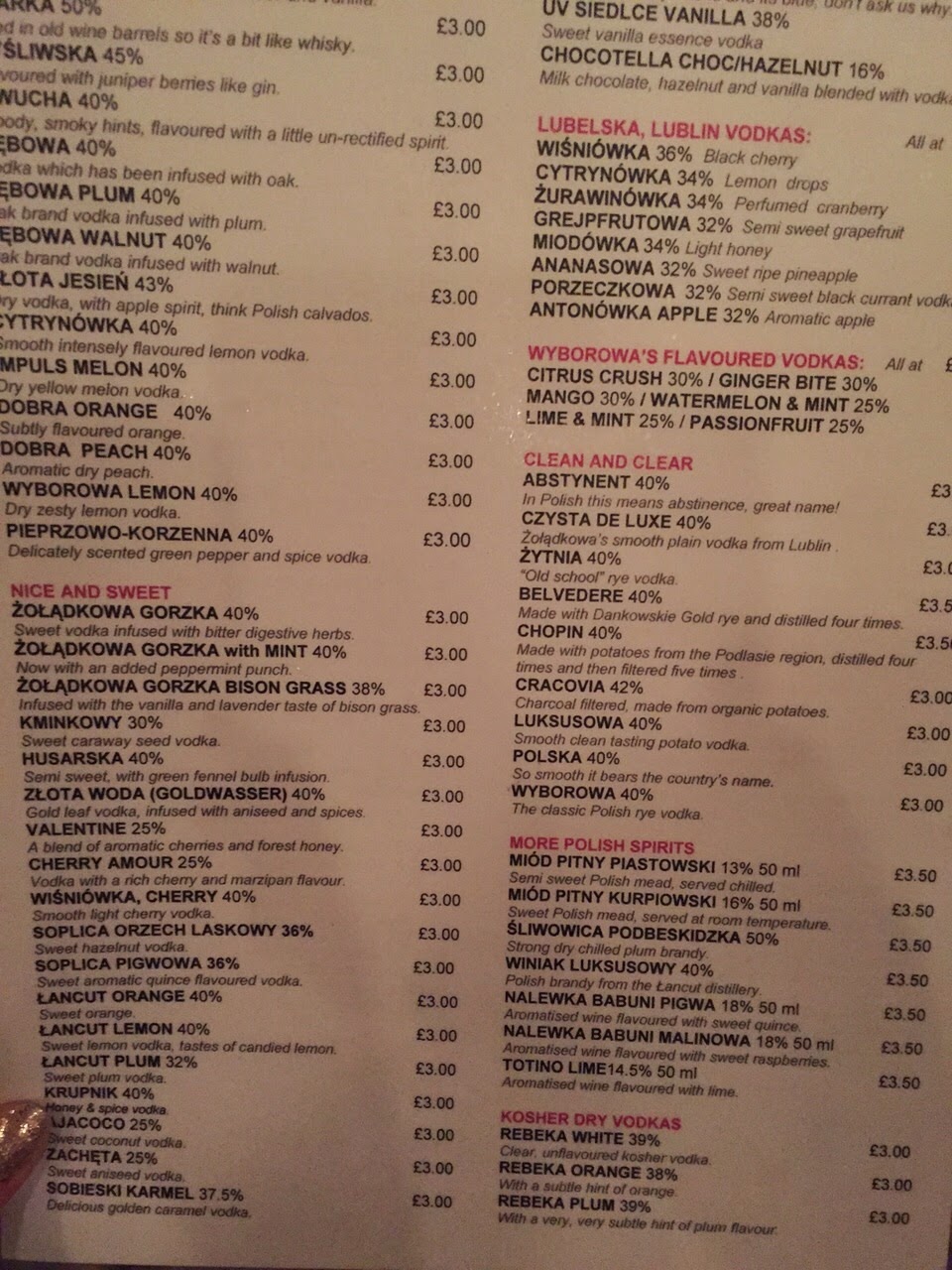 The menu is split into divisions of Dry and Interesting, Nice and Sweet, Clear and Clean, and various brands of vodka. You can try flavours such as starka – a vodka aged in barrels so it becomes a bit like whiskey, or  a vodka infused with bitter digestive herbs. We tried quite a range, having about 7 between us in the short time we were there. First up we chose two each – I had honey and spice and melon, Alison had lemon drops and hazelnut.  At only £3.00 each, you can definitely try a few different ones so after these four we went back for another three. I chose these and this time I picked sweet plum, kminkowu – sweet caraway seeds and husarska – green fennel bulb infusion. 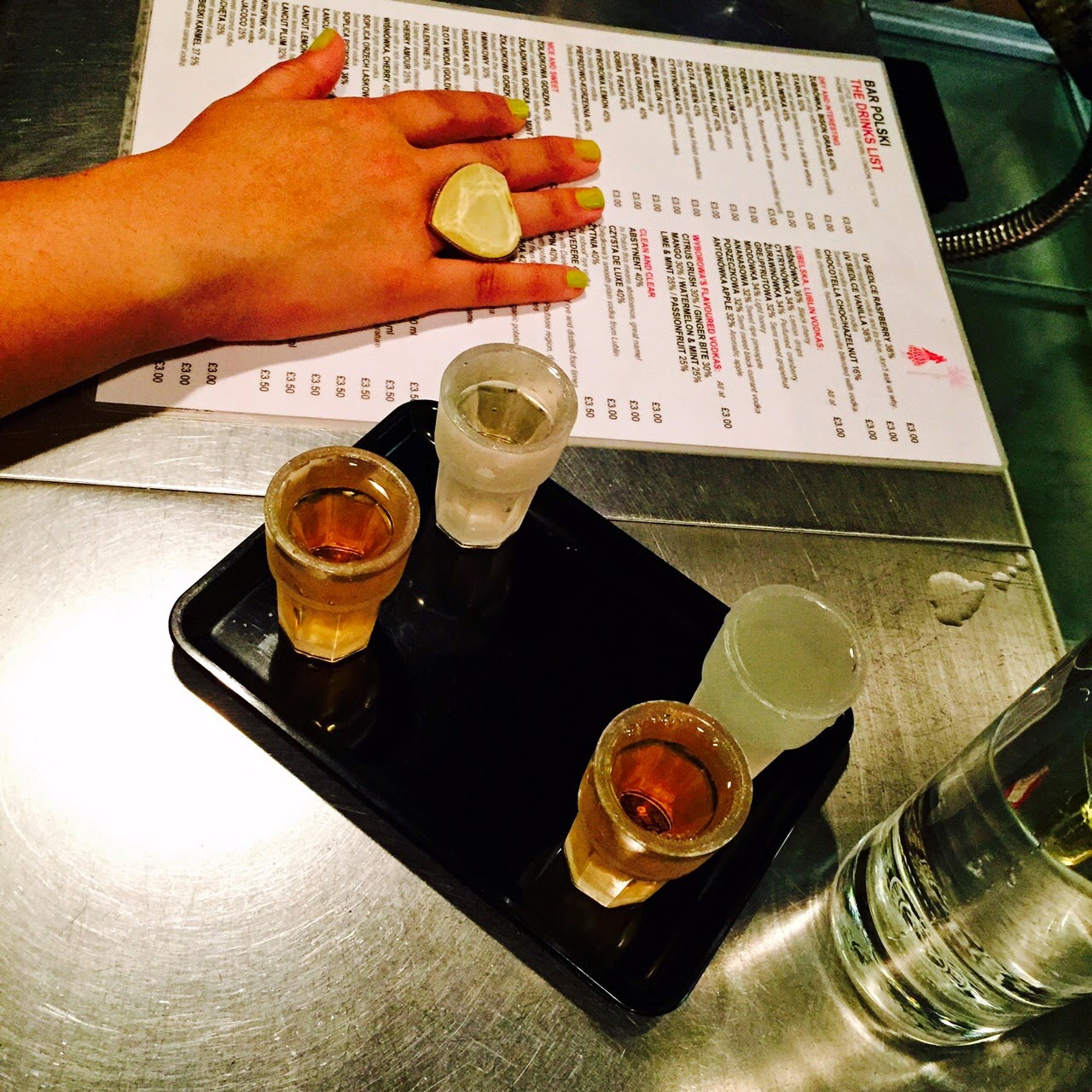 You can either take the view that they sell shots and so you should shoot them, or, you can sip them and savour the different tastes. For they actually do have quite intense flavours that are (mostly) pleasant to drink, rather than mainly tasting of vodka with a hint of something else. We didn’t shoot ours and instead shared them between us so we could try them all.  I liked all of them except the fennel one which had a more powerful aniseed taste than real fennel tends to.  The most pleasant surprise was the sweet caraway seed flavour, which reminded me of sesame. Nutty, but indeed sweet.

Being the night before Christmas Eve, with very few people in town, Bar Polski was all but empty. There was just one very drunk work party, and us. So the atmosphere was lacking, and it being rather hidden behind Holborn station I can imagine it doesn’t get too packed anyway. Obviously, this is the place to go for any vodka lover, but I’d highly recommend it for those who profess not to love the spirit as well – the flavours here will convince you.

After this we went to some godawful pub that just happened to be opened while we were passing. We were really just biding our time until we thought it was late enough to go to Trisha’s, otherwise known as 57 Greek Street.


Sure enough, you would never know it was there if you didn’t know. We knocked and were permitted to enter. I think it’s supposed to be a ‘members’ bar, but it’s a members bar in the same way that Manero’s is – basically if you can find it, you’re allowed in. It wasn’t quite what I was expecting though it was a cool little bar and one worth remembering for late night drinks. I thought it would be livelier, with people dancing, but there was barely room for this and people were quite happy to sit at the checked cloth tables or stand at the bar. It was all quite civilized, basically a place to keep drinking when the other bars were shut, not necessarily to keep partying. Or perhaps I was just there on the wrong night.
Posted by Ginglesnuff at 1:06 PM