The Little Yellow Door is an excellent concept. What is better than a house party? A house party that someone else hosts, that’s what. And this is what The Little Yellow Door aims to be. They have taken over the Blagclub (somewhere close to my heart) and turned it into a simulacrum of a flatshare. Thursdays is open for drinks, Friday they host a dinner party and then stay open for drinks, and Saturday is supposed to get ramped up for a late night proper party.

I couldn’t wait to go and try it out. We thought we’d go for some festive drinks on the Thursday, and then, if we liked it, come back sometime for the Saturday night party.

One of their unique things is the fact that you can make a booking through Whatsapp, just as if you were just texting a friend about coming by. I asked them if I needed to make a booking if I had a group coming, and they said it depended on whether I wanted an area reserved or just have drinks at the bar. I said I’d have an area if possible and they said they’d check but asked if drinks at the bar would be ok if not. I said yes. Then I got an email saying I’d made a reservation for 11 people. I assumed that meant I’d booked an area. But when my friends turned up, no such area existed. Not really a problem but just a little confusing so not the best start to the evening.

However, we were happy to take in the atmosphere and have a few drinks nonetheless. They have done quite a good job of making the place feel like someone’s house. There’s some mismatched furniture – tables and chairs. There is bric a brac lying around, shoes by the door and the girls’ bathroom is full of toiletries. They’d put up a tree and some antlers and Santa hats, making it feel very Christmassy. So, we liked it. My group spotted that there was a table empty until 8:30 and thought we’d sit down while we could, being as it was still only 6:30. The staff at Little Yellow Door had other ideas, with one member particularly insistent that we couldn't sit there, even though the space was going to waste for the next two hours. Eventually, with much persuading they gave in and we sat down until the reserving party arrived. So, we’re starting to get a bit of a sour taste in our mouths. 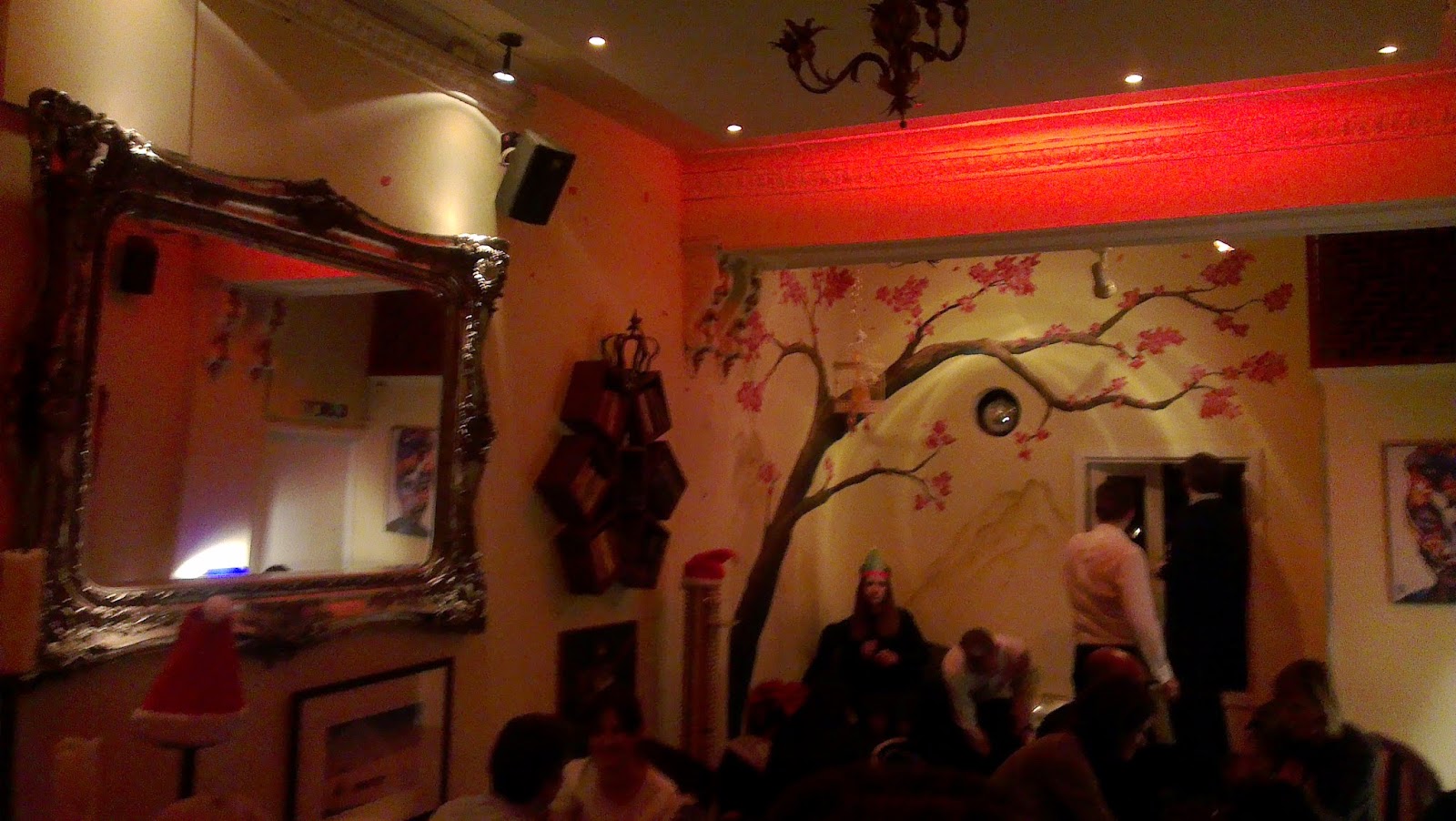 This continued when it came time to get the drinks and food in. On the Thursday they serve the kind of finger food you’d expect at a house party. My friends ordered the cheese on toast and got a cocktail each. Their bill wasn't cheap at £17 per person. It might not have been quite so much, except for the fact that a service charge was automatically added. Which seemed a little odd considering you had to order at the bar. Then my friend waited for her food to arrive. And waited and waited. An hour. It was especially grating that she had paid in advance for service which was then awful. To be fair, someone evidently spotted her getting in a bit of a rage and gave her a drink on the house.

I thought maybe the food alone was what incurred the service charge so went to the bar and ordered the Crime of Passion - £8.95. Perfect! I had £9 in coins on me. The bartender asked for £9.75. I queried it and he explained it was the service charge. But I’m sorry, Little Door, that is not how bars work. If you are offering me table service, then yes, I will pay a service charge. If I have to go to the bar, wait and order, then I am paying the price of my drink only, and may leave a tip if I'm particularly wowed. As I'd been sort of forewarned I had the wits to ask for the service charge to be taken off, which the bartender did quite graciously. But normally I probably would have just paid it and then felt like I was being taken advantage of. 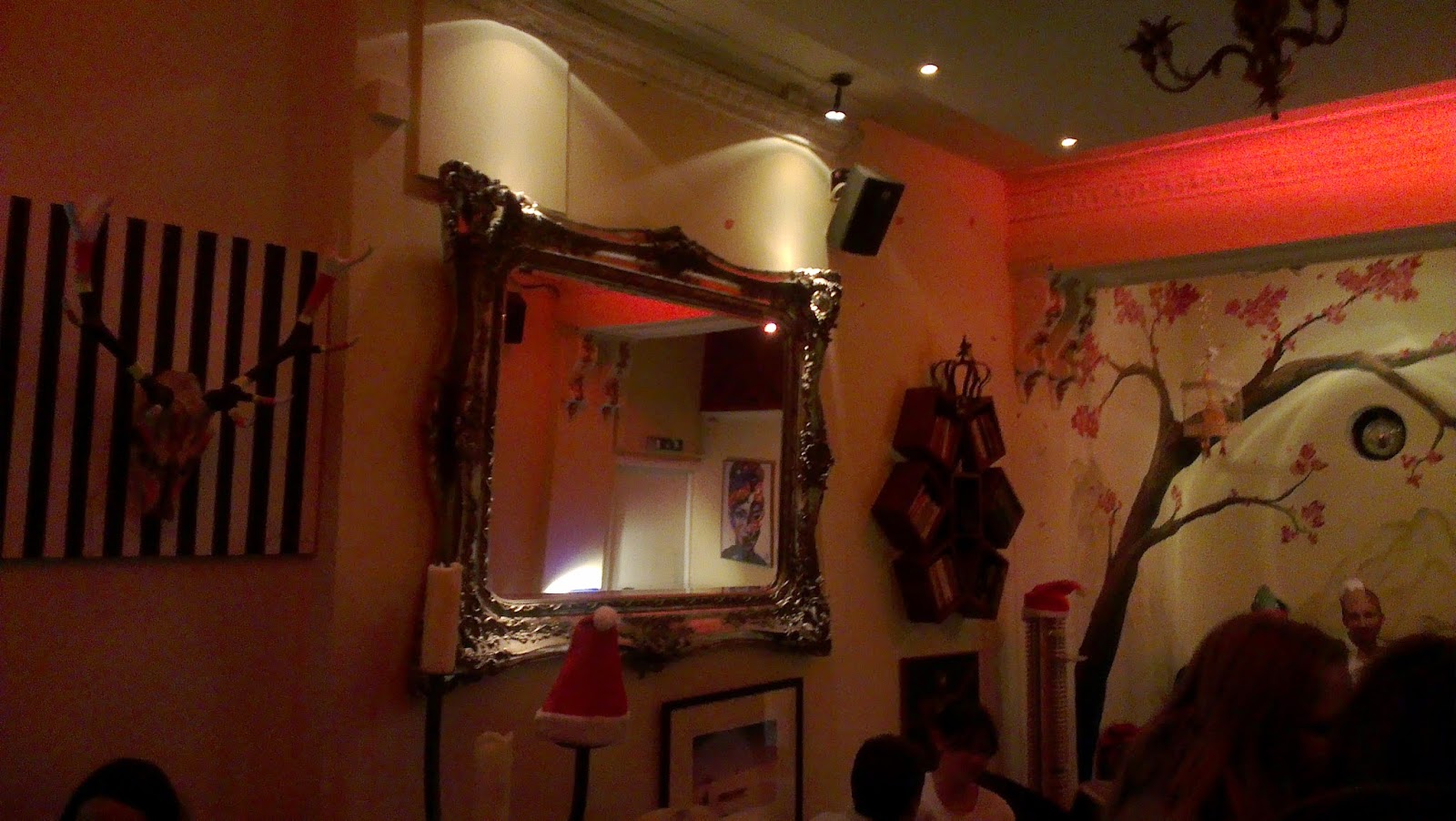 We had a couple more drinks, and the place emptied out a bit and we sat down for a while. It was pleasant, but it did just feel like a bar. And a bar that wasn’t that different to other places I’ve been. It did, in fact, remind me of another Little Yellow Door, AKA Manero’s, in Dalston, where the place is so small and intimate it feels like you’re at a house party. The quirky décor was a bit more detailed to what might be found in any old East London bar but that wasn’t quite enough. What would have been great is if they took the concept even further – had some fake housemates there to greet you, ask you if you want a brewski, bring your drink over (maybe that would warrant the service charge). You know – the way a real host at a party would. Maybe some extra fun and games (karaoke? a pinata? a way for guests to pick the music?) would help make it seem more on-theme.

So, great concept. Execution? Not so much and I probably won't be schlepping over to West London to try out their Saturday nights.
Posted by Ginglesnuff at 2:25 PM