I think Honey & Co cemented itself in my mind after a joyous review by Grace Dent back in May 2013. Being under the mistaken impression that it was no-bookings, the more it garnered love and attention, the less I was inclined to try to go; I knew it was a very small restaurant and imagined there would be queues round the block. But I ended up there on the eve of New Year’s Eve after trying to have a curry at Ragam only to find it closed. Honey & Co was more or less round the corner, and figuring that we were in the dead time twixt Christmas and New Year, I thought we would get in easily. Well, I was wrong, because it does take reservations and the place was fully booked. The only place they have for walk-ins is five seats at the window and they were all full. If I’d only known they take reservations, I would have booked myself in there ages ago! One group, however, seemed to be nearing the end of their meal...

Our waitress guesstimated it would be about 20 minutes and we went to the really nice pub next door to wait. They said they’d call when space became available. But we were soon starving and had finished our drink without knowing whether to get another, so after half an hour we decided to call it quits. No sooner had we set off did they phone so we did an about-turn and settled in.

And I can confirm, Honey & Co is worth every bit of love it has been showered with. It was a bit of a slow burner but by the time I finished their notorious cheesecake I was certain that I was bewitched.

As it was a post-Christmas/New Year treat we decided to get the special set menu for £29.50 – a starter of nine mezzes plus a main each, and a dessert each. You choose your main and dessert from the a la carte menu but the mezze selection is set. 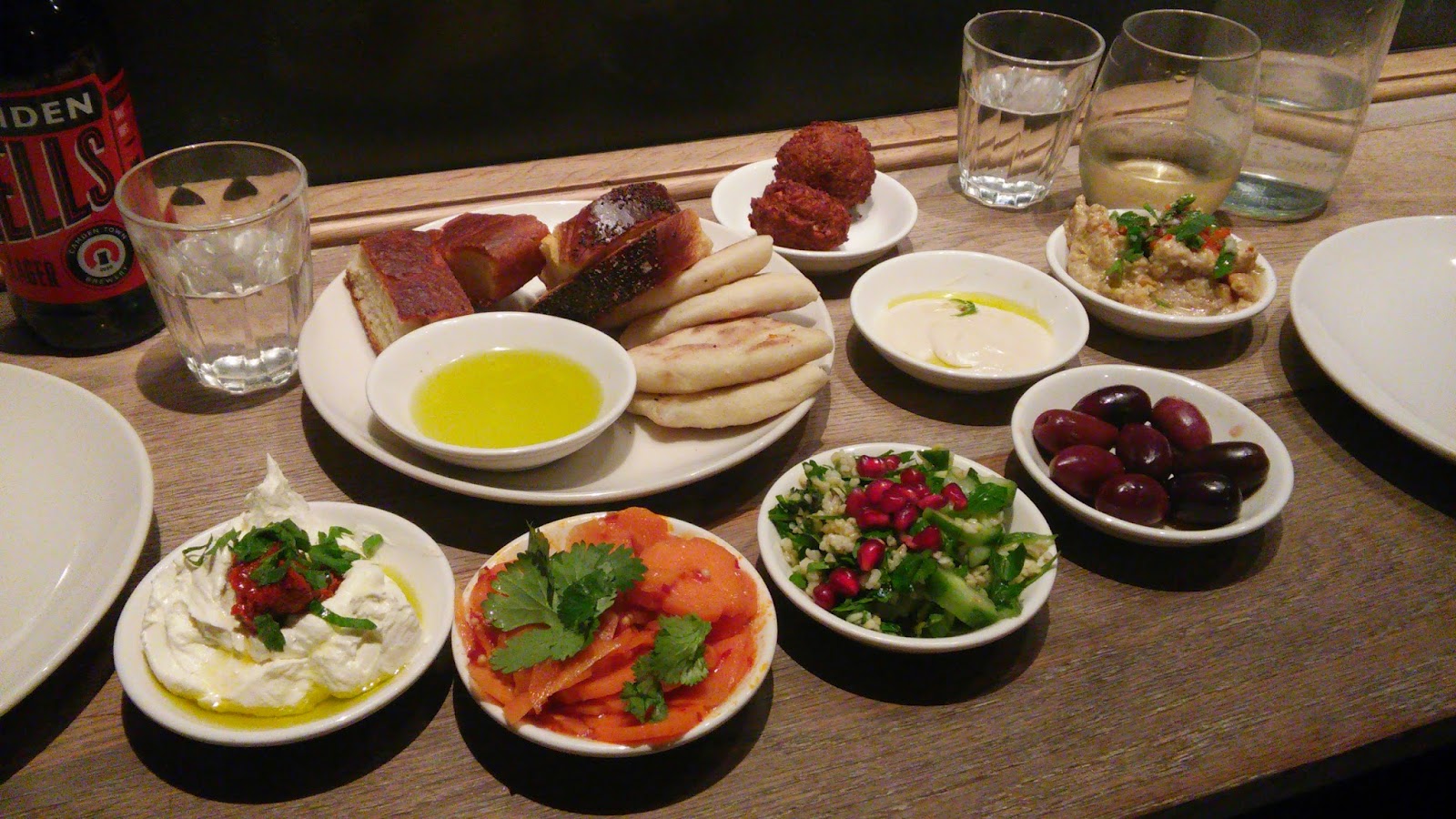 Although none of the dishes are what I would describe as basic, without the final two plates we had, it would be a fairly typical selection of cold mezzes – the sort you might find in many a Levantine or Middle Eastern restaurant. You get falafel, hummus, olives and pickles, some lovely bread (especially the potato bread), some tabbouleh and labeneh with Turkish pepper puree. But the truly unique dishes of pumpkin and pickled apple, and quince with curds and honeyed hazelnuts made all the difference. The pumpkin for certain was our favourite. I’ve never had pumpkin before but I would most definitely seek out its earthy and slightly sweet flavours again.


I was surprisingly full after these little dishes. Eating in such a manner is so good at tricking the stomach. But we had our mains to come and I valiantly ate all of mine. It didn’t look a huge amount compared to Stephen’s tower of quail, but it was quite the hunk of meat. It was cooked to a perfect tenderness, with a nice bit of fat preventing it from being dry. The beef came with quince and potatoes. Having only had quince in jam form before, I enjoyed trying it as a fruit itself (twice in one meal!). It was similar to pear in its texture but a more interesting alternative. 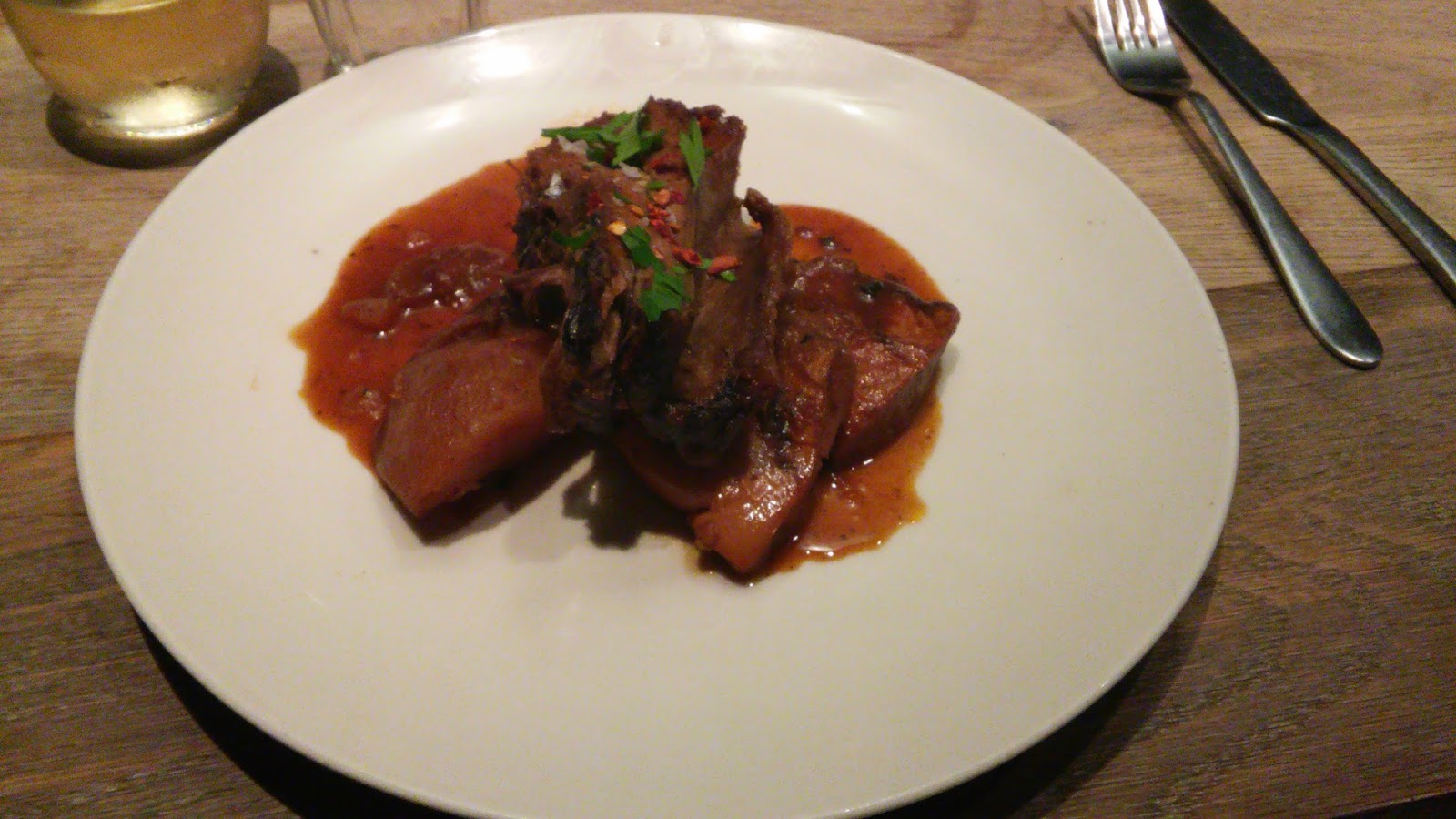 I gave in to food envy when Stephen’s main arrived. It looked magnificent and tasted it too. The quail was cooked beautifully –  crisp on the outside, the right hit of seasoning, and lots of lovely white bean hummus and crispy onions, of which I stole several. There was perhaps a bit too much on the plate in fact. I would say we could have done with some extra bread to make use of all the remaining hummus but, truth be told, if we’d eaten more bread, dessert may not have been on the cards. And that would have been a travesty. 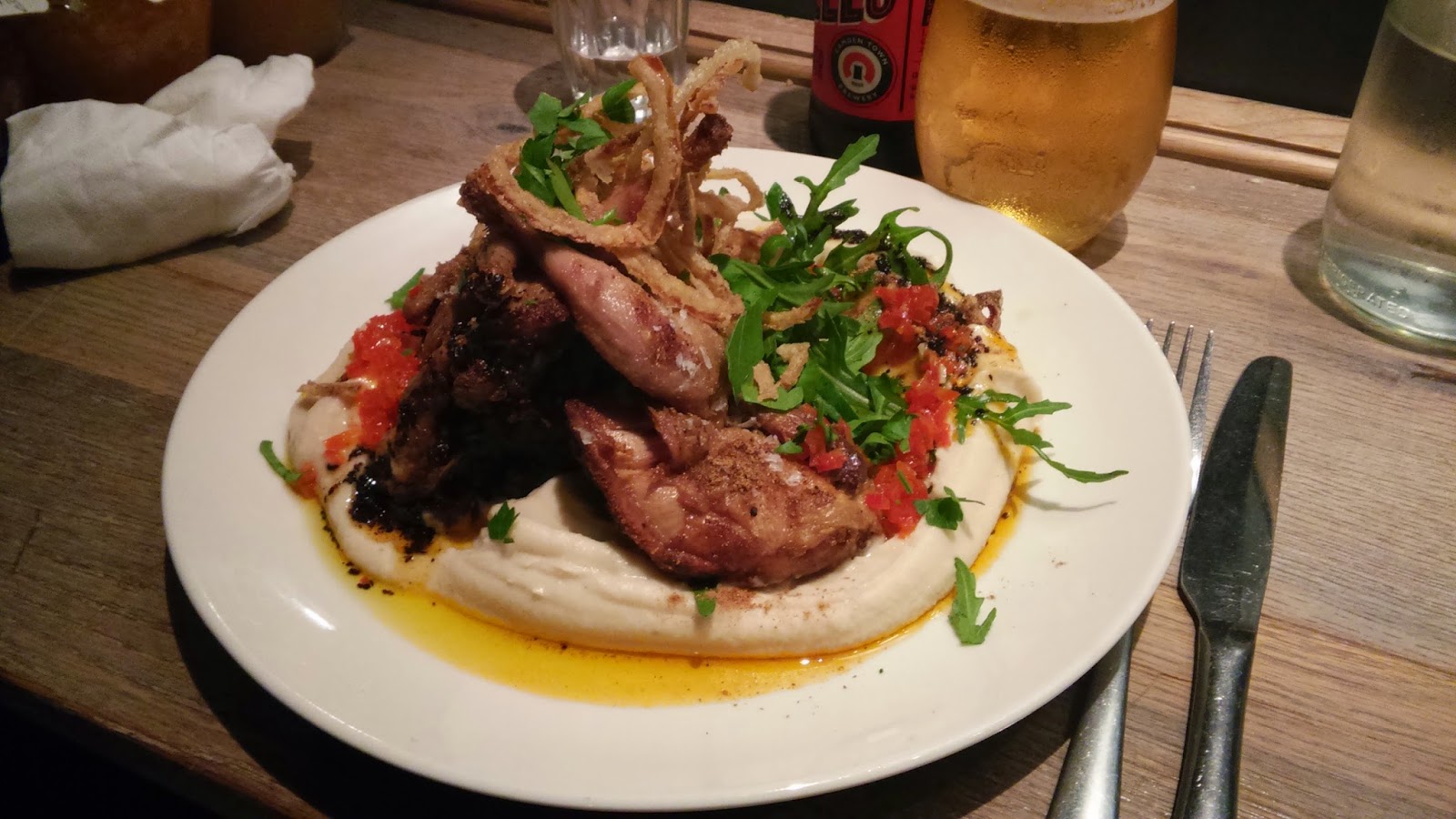 After the customary debate about whether to have one, or if we have one, whether to share, we went the whole hog and ordered one apiece. I had this masterpiece of a cheesecake, which has gained quite the notoriety for itself. Whatever you have read is true. It is unlike any cheesecake I’ve ever had, so creamy it’s almost like eating gelato. And forget your boring old biscuit base, this has a nest of finely shredded filo pastry called kadaif looking a bit like uncooked packet noodles. It is bloody delicious – crunchy and sweet. Each rich, sweet, crunchy mouthful was better than the last. Best cheesecake I’ve ever tasted. 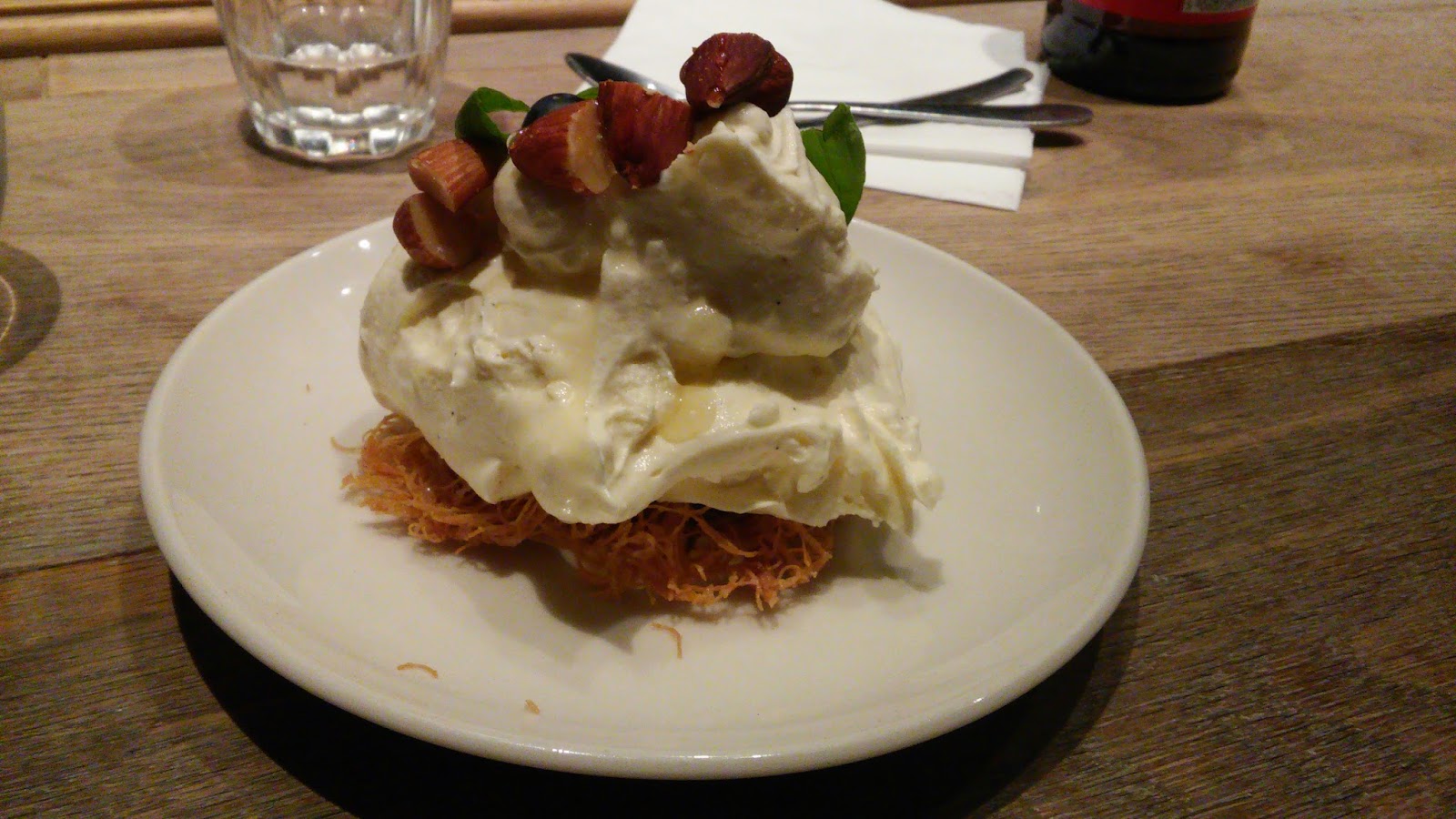 Stephen’s dessert however, was no less impressive. The apple and pear pie he ordered was like an insanely good McDonald’s apple pie – warm fruit completely encased in a delicate, crisp pastry parcel with custard for dipping on the side. While being in love with my cheesecake I could still appreciate the understated splendour of this dessert. 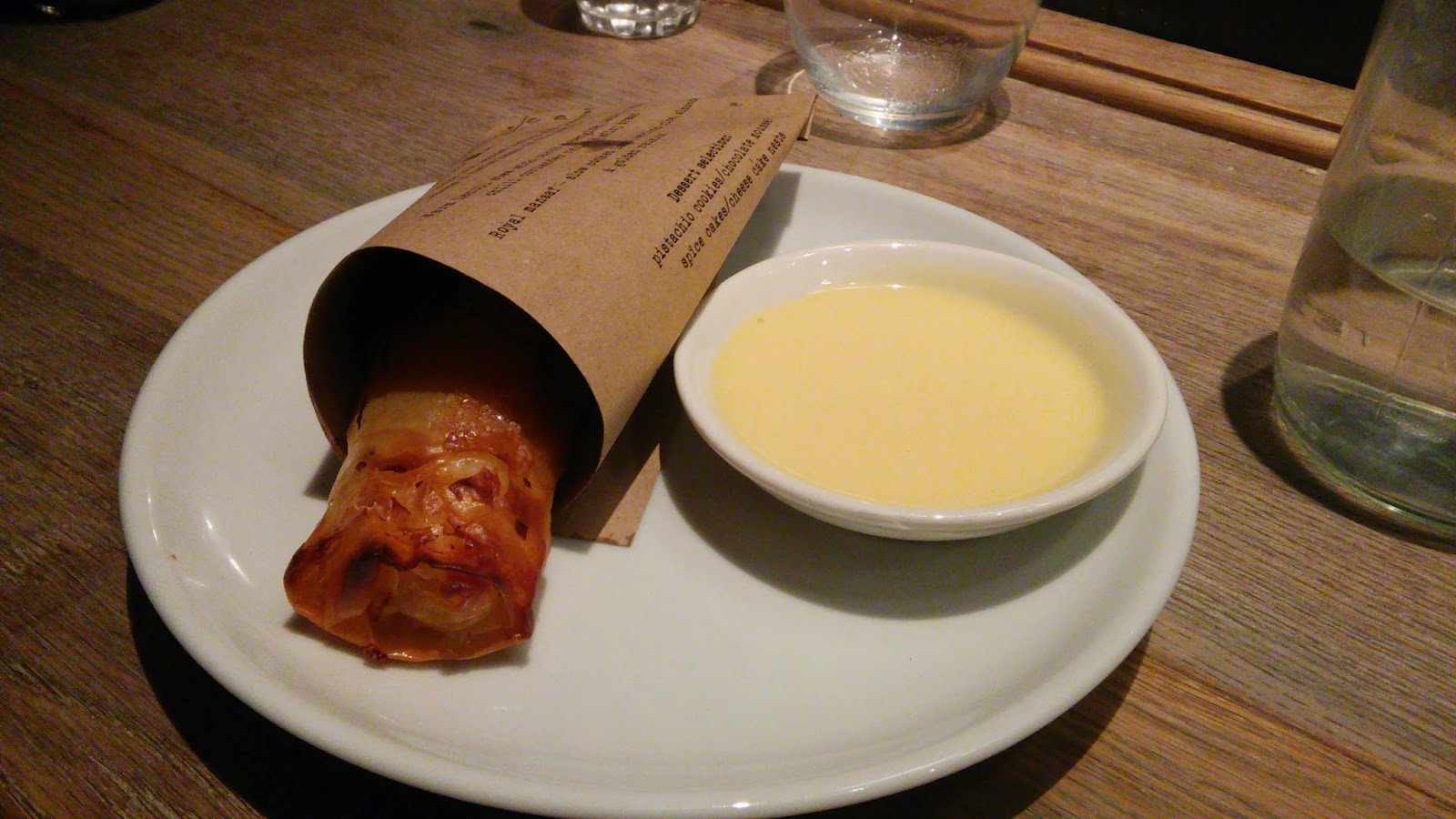 I would heartily recommend this restaurant to anyone for any course, but they really do reserve something that little bit special for their desserts so worth coming here for those alone.

Posted by Ginglesnuff at 1:49 PM