I've walked past Translate bar several times, mostly in the day and each time I think 'ooh, what's that place, that looks nice' before realising again it is Translate. On Saturday, I actually went in, for a drink or two before The Dance Assembly at the Horse and Groom.

And it was nice. It wasn't as busy as I feared it would be - plenty of people to give it an atmosphere but there was still plenty of space for standing, or, if you were lucky, sitting like we did. There's pretty lights at the window and interesting art on the wall, plus that stripped back, brick thing that Shoreditch does so well. 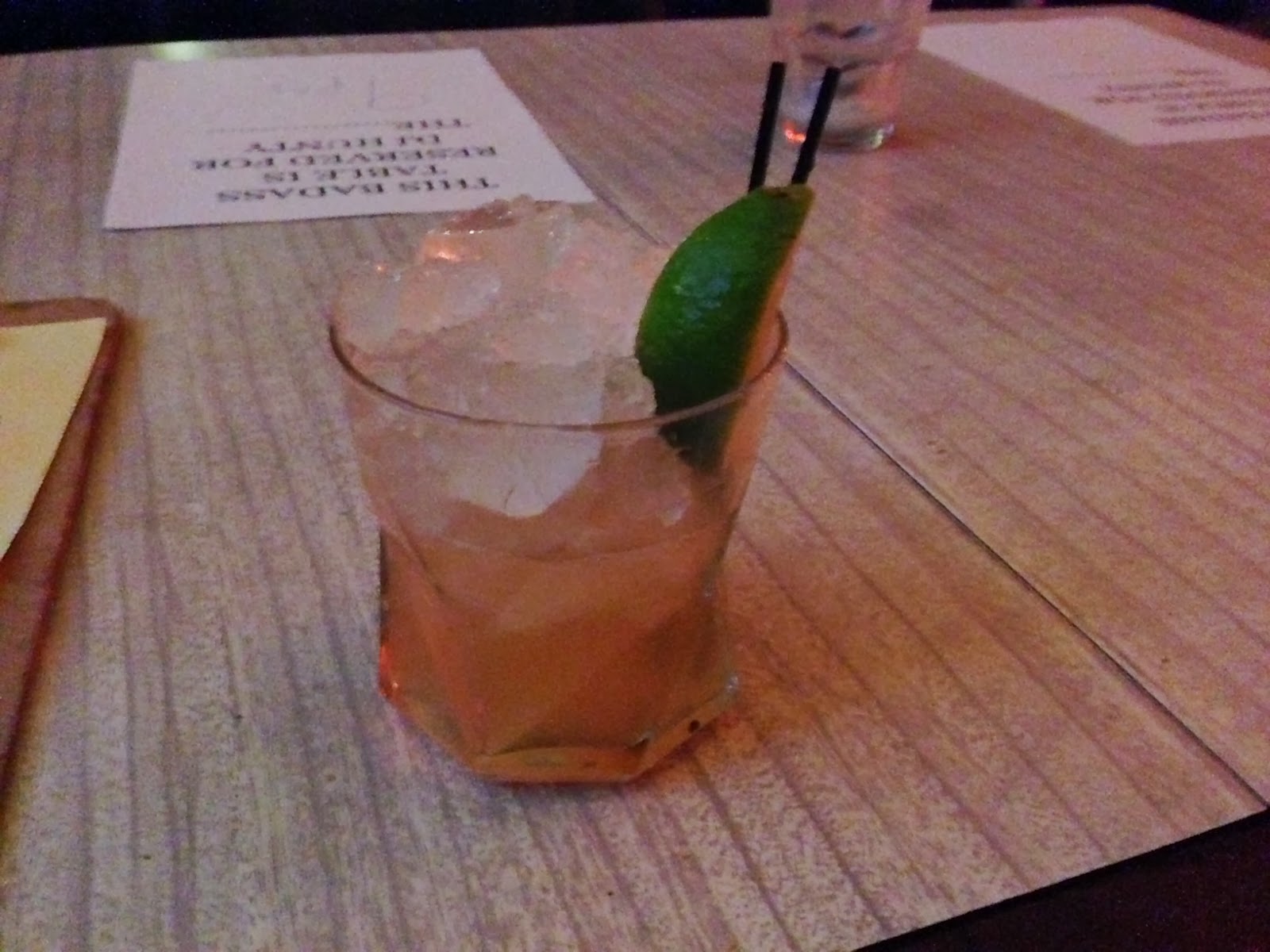 They had a couple of interesting beers that Stephen went for - I had an averagely priced glass of house white which was plenty drinkable before perusing the cocktail list. These are mainly £7.50 (or £10 if you go for one of the 'posh' ones - their words) which is an acceptable price to pay for a cocktail in a place whose raison d'etre isn't cocktails unlike, say, Callooh Callay or Worship Street Whistling Shop. I ordered the Taste of Honey (apparently the first person to actually call it by its name, rather than just the top two ingredients of honey and lime listed on the menu.) The menu, by the way, is a rather cute-looking thing itself, the ingredients of each cocktail being designed in the shape of a drink (presumable to match what it looks like when served). The taste of honey was a short, strong drink of rum, but obviously the addition of honey gave it a sweetness that I like in my boozy beverages. It was great, and I could have have had many more but I didn't want to spend a fortune so I switched back to wine for my last drink there.

The music while we were in there was fantastic. I meant to write down just a few choice songs but each time another song came on, it was again worthy of note. So, a selection of our soundtrack to the night included:

Salt n Pepa's Whatta Man, Soul II Soul's Back to Life, Madonna's Papa Don't Preach, The Doors – Break on Through, The Beach Boys – Barbara Ann and Aretha's Respect. Not too shabby - diverse and a little bit old school but all gems to put you in a mood for a night out. 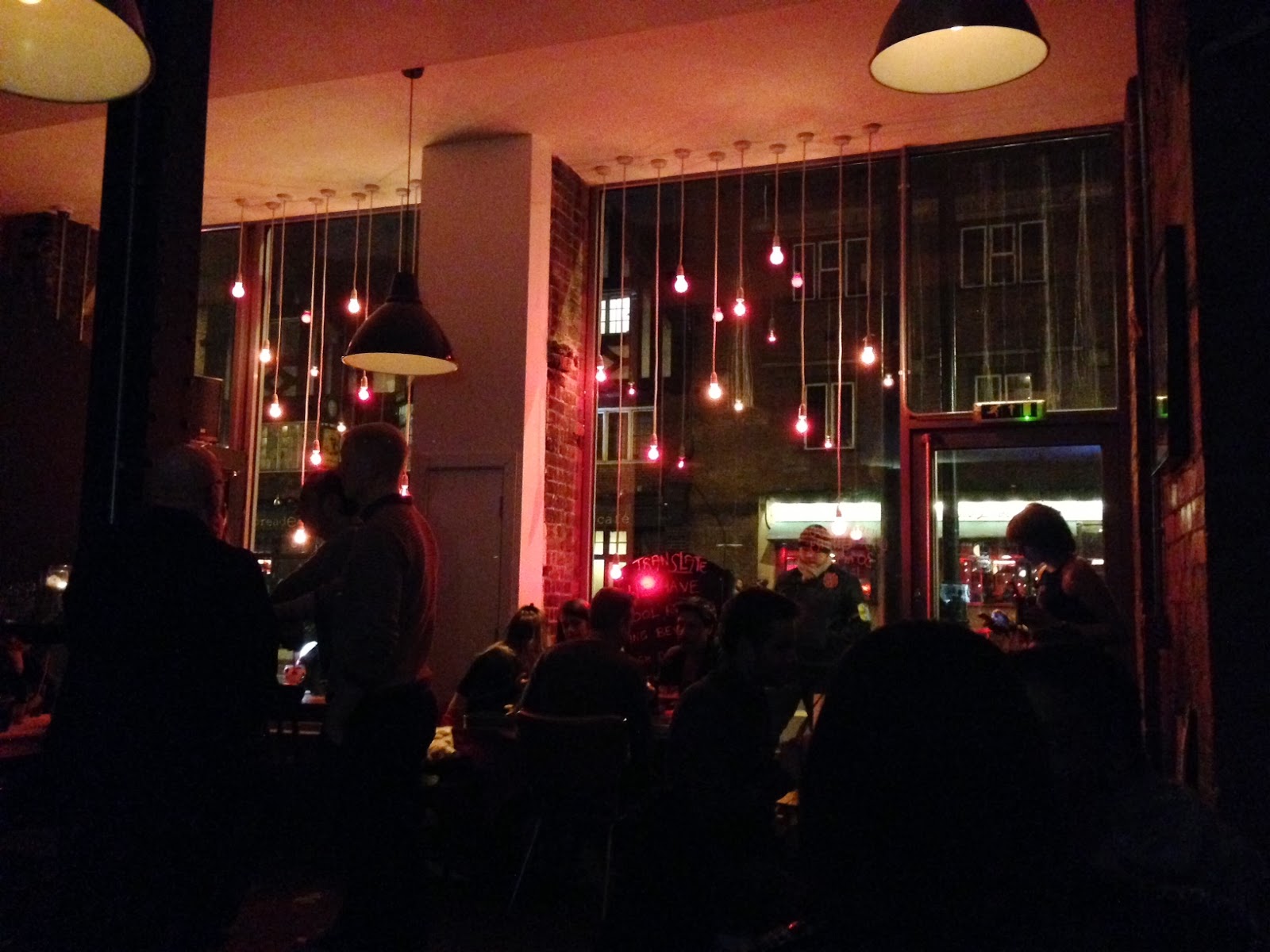 At about 10 the DJ came along but we didn't notice much of a change in the music - we left shortly after to go to our next stop.

The anticipation for this night was pretty sky-high. Many, many months ago I stumbled across these guys on twitter and I liked what they were trying to do. Lamenting the demise of all the old rave havens of King's Cross, they wanted to reignite a bit of that spirit in London. They didn't even have a date for their party yet, but I watched and waited. Waited too long in fact as the tickets went on sale and before I even knew it they'd sold out. Luckily a few more were released and I managed to get the very last two tickets.

I hadn't, I must confess, ever got down to the big clubs of King's Cross like the Cross and the Key back in the day - when they were going strong I hadn't quite yet discovered what proper dance music was (I had been put off by the stuff I heard in my local club, not quite the same thing I came to discover). So this night appealed to me as a chance to experience something I'd missed out on the first time. A bit like going to see a band who have reformed. Only, unlike with many band reformations, it wasn't shit and they played all the good stuff. 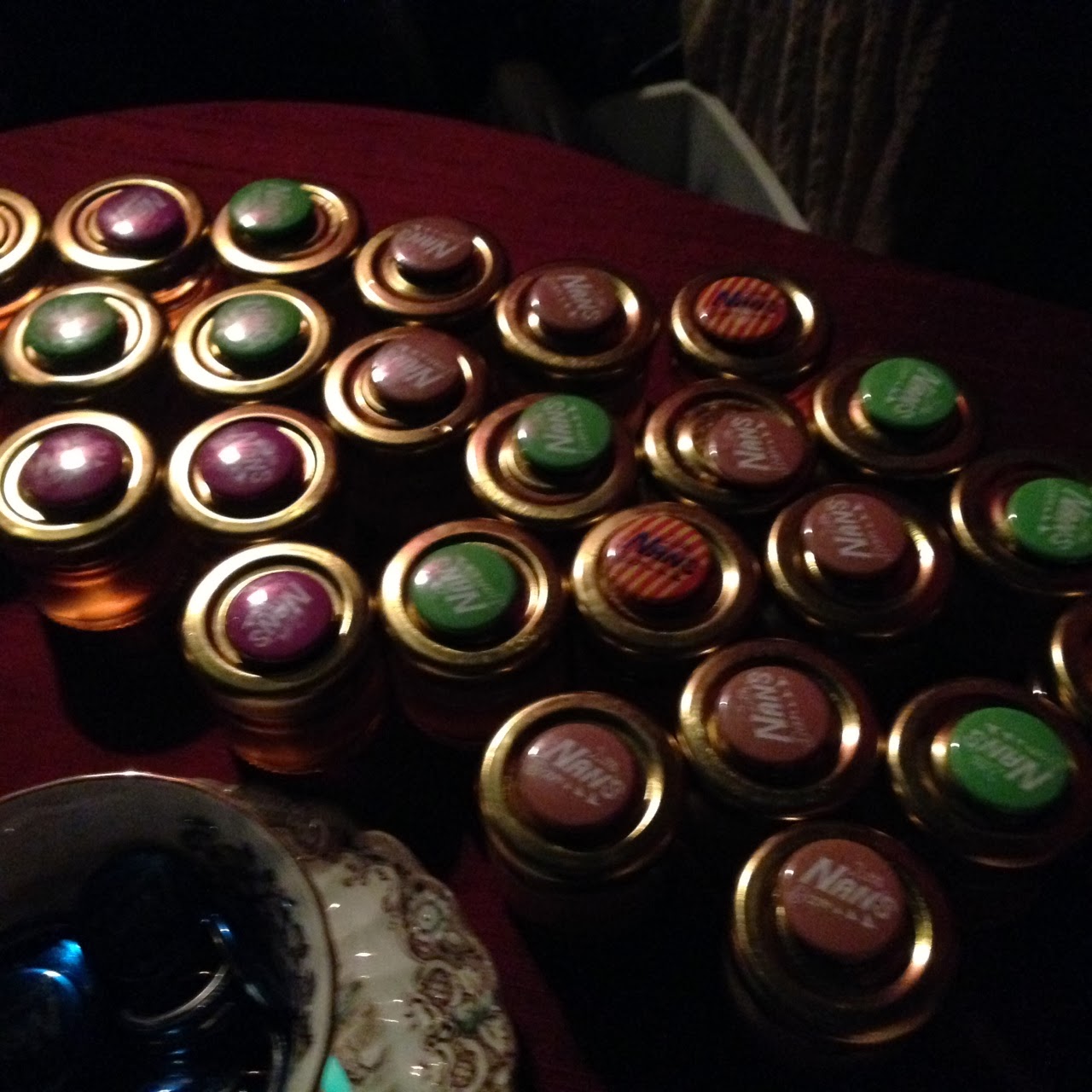 This night was a roaring success. I think there were a lot of people there who knew each other from that golden era, but I think there were plenty of newbies like myself and my friends, and The Dance Assembly catered for both crowds. One room was a nod to the raving hey day, another room had license to showcase the best of the new stuff on the dance floor these days, and then, when you needed a breather, you had the lovely parlour where Little Nan's were serving gorgeous cocktails in teacups, and amazing little jars of something scrummy. I had one of these at only £3 a pop, and then I also had managed to be one of the winners to name a cocktail and got to have one free! Lovely to chat to them as well after having had some twitter interaction with them. They're celebrating their first birthday tomorrow - head on down!

There were a few downsides but I know already that the organisers know about these and have vowed they won't be repeated at the next one (June 7th - already in my diary). The queue for the ladies toilet was long, but that didn't faze me as it always is. By the time we got there the cloakroom was full and this was pretty annoying - I came to dance and didn't want to dance holding my coat the whole night! We stashed our stuff behind a sofa and hoped for the best, trusting the crowd to be too lovely to nick them. And, despite limiting the number of tickets to only 150, the place got surprisingly rammed later on in the night! I suspect the Horse & Groom started letting people in willy nilly after a certain point.

But I still had a blast. The music was top notch - lots of stuff I knew and loved. I was in the frame of mind for dancing and they played right to that. It's all a bit of an enjoyable blur - I probably couldn't name what was played, I just remember loving it!

Posted by Ginglesnuff at 5:06 PM