According to the women next to us, I must have either been mad or a blogger. Why would I have been mad? Because no one in their right mind would have bothered taking pictures of the food at Le Coq. Oh no no no, one might take a picture of every dish at The Fat Duck, but the stuff they were serving at Le Coq? Well, one could have similar fare in the countryside of France or Italy that would take your breath away didn't you know?

I'm happy to say that, image quality aside, even if I hadn't been a blogger, I don't think I would have been mad to take pictures of my meal at Le Coq because I thought it was brilliant. Apart from maybe the tables being too close together, forcing us to listen to the two posh knobs next to us.

Despite the French-sounding name, this actually has very obviously Italian influences (kind of like Oui Madame) with Italian ingredients and sauces coming to the fore. Ever heard of agretti? Or cedro? What is agrodolce? I'd never heard of any of these despite my mild foodie status. 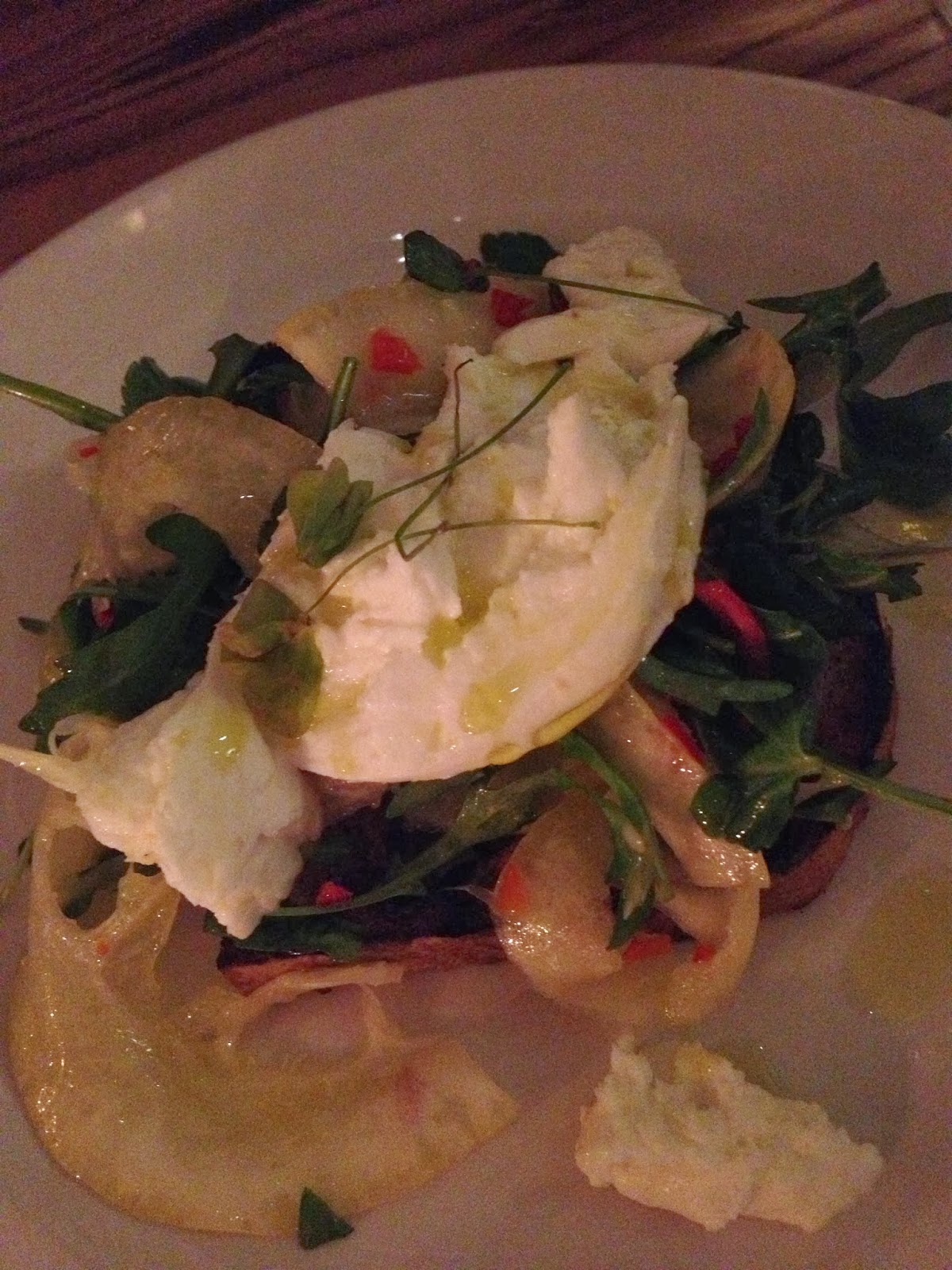 Le Coq is mainly about chicken and in that there is no choice - you get two pieces for your main - one dark meat, one white, and you get the side of the week. The week we went it was swiss chard with that agrodolce sauce (a sweet and sour sauce). But you do get to choose how many courses you want (2 or 3) and to choose between two options for your starter and/or dessert. There were a couple of specials too, but we didn't pay them any attention - it was hard enough deciding between just two things. We were smart and decided to both only have two courses - but one of us had the starter, one had the dessert and we shared them. We went for the bruschetta with cedro, wood sorrel and mozzarella to start. I'm sure the agretti and shrimp fritt would have been lovely but I refuse to believe it was as lovely as our bruschetta. For that price range I do not think I've had a lovelier appetiser. Cedro, as our Italian waitress explained, is like a big lemon, thin slices of which were all over the bruschetta. It was very, very lemony but without that bitterness, meaning you could eat such slices of it on its own. I don't think I can convey how tasty I found this starter. I would say, just go and try it, but they'll have changed it for something else next week! 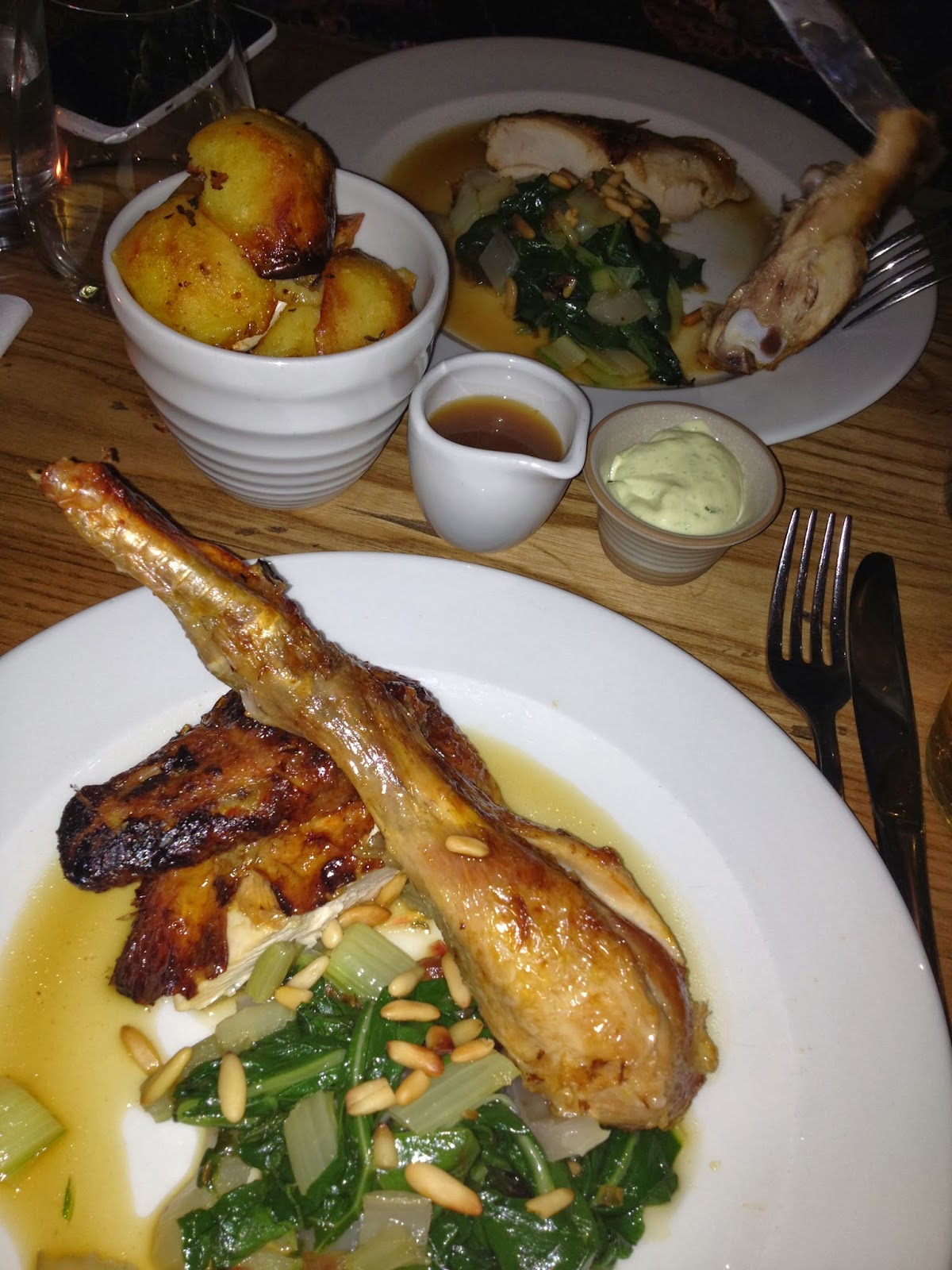 We ordered some rotisserie potatoes with our chicken. They were perfectly cooked, both crunchy and fluffy. The chicken was juicy and came with extra chicken jus and a pot of tarragon (I believe) dressing that was light as a feather.The swiss chard was delicious, the sweet juices mixing pleasingly with the chicken gravy. Pine nuts were a welcome additon, as always. I actually wish there'd been a little more of the chard so that I could have some with every bite of my fabulous chicken.

Finally, we shared the pistachio and grapefruit tart which came with a whipped soured cream. I wasn't keen on the cream, not being a fan of the soured variety, but the tart was fab, even though it was impossible to photograph well. The pistachio was found in the bulk of the tart, which was a bit cakelike and then it was studded throughout with the tart grapefruit.

We had ordered a litre - yes a litre - of the house wine, which wasn't much on its own but paired with the chicken really well. 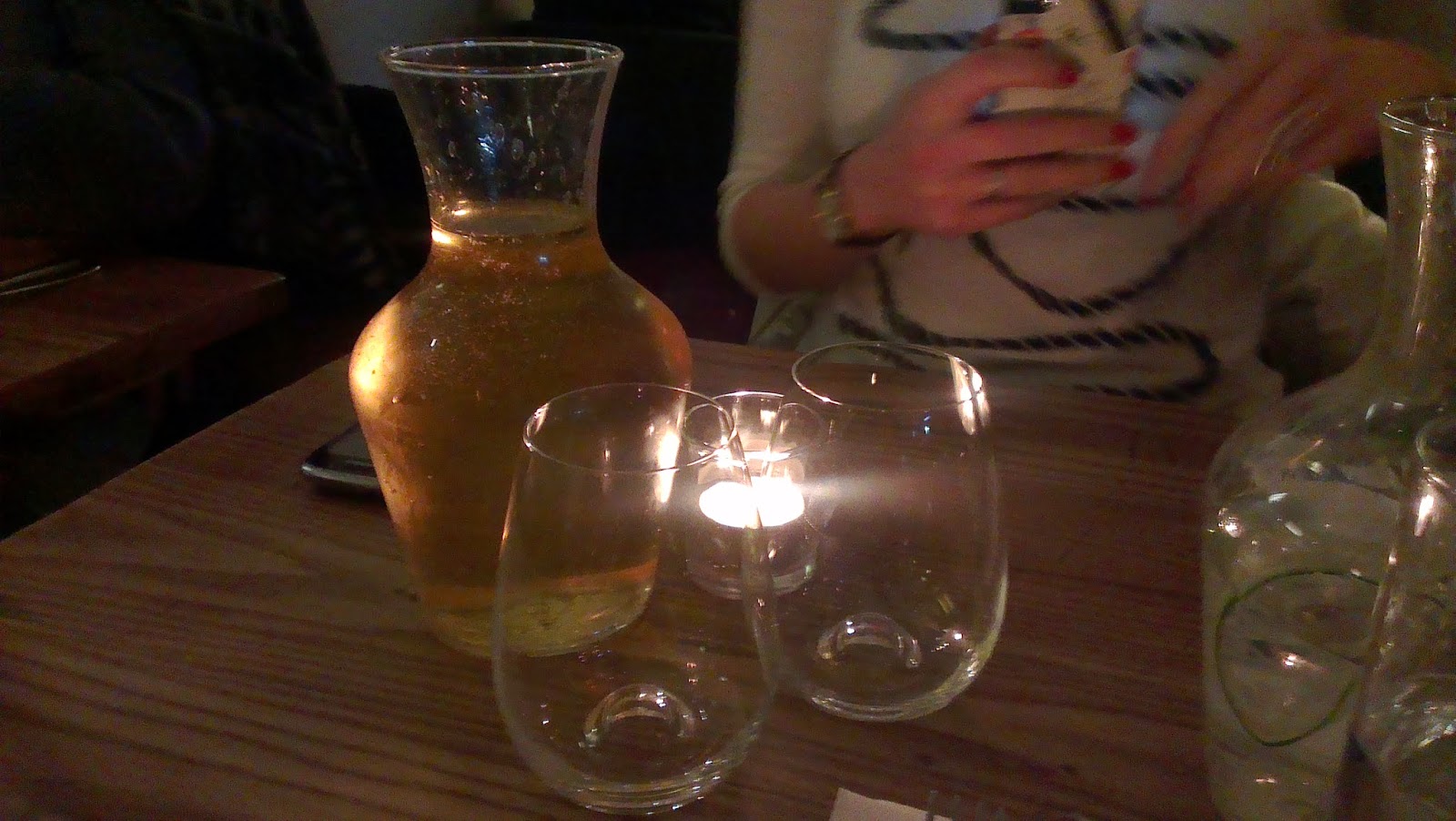 I was really impressed with Le Coq - interesting food cooked well and excellent value for money. It's another one of those 'neighbourhood' restaurants - the kind of place to go when you could do with treating yourself to a night off cooking, but don't want to dress all fancy and spend loads of money. And with its weekly changing menu, there will always be something new to discover.

Posted by Ginglesnuff at 1:26 PM