My boyfriend and I are developing a few of our own Valentine's Day traditions. Firstly, we stopped celebrating it on Valentine's Day and instead do it the day before (or after) so that if we want to go to a restaurant we aren't forced into choosing from a special Valentine's Menu and the place isn't full of sickening couples. Secondly, we seem to end up at slightly weird places (last year - Naked Girls Reading, the year before, a war memorial). And thirdly, my boyfriend buys 'me' some chocolate from Paul A Young (which he gets to share of course).

This year we took the day off and went for lunch at the Opera Tavern for the first part of our celebrations and then went to the Romantic Misadventures event in the evening (see next post about that).

Opera Tavern is run by the same people who own Salt Yard (and Dehesa, and their new one Ember Yard). We'd been to Salt Yard for my birthday a few years ago and loved it so we thought we should try one of the other ones.

Salt Yard is a basement restaurant, with a bar for drinking and charcuterie upstairs, whereas Opera Tavern has its bar on ground level and the restaurant upstairs. Which makes for quite a bright and airy room, not quite the romantic cavern we had imagined. The romance was dialled down another notch by the room being mainly occupied by parties of six or more, and so was rather boisterous. Oh well - our own folly for bucking the V-day trend. 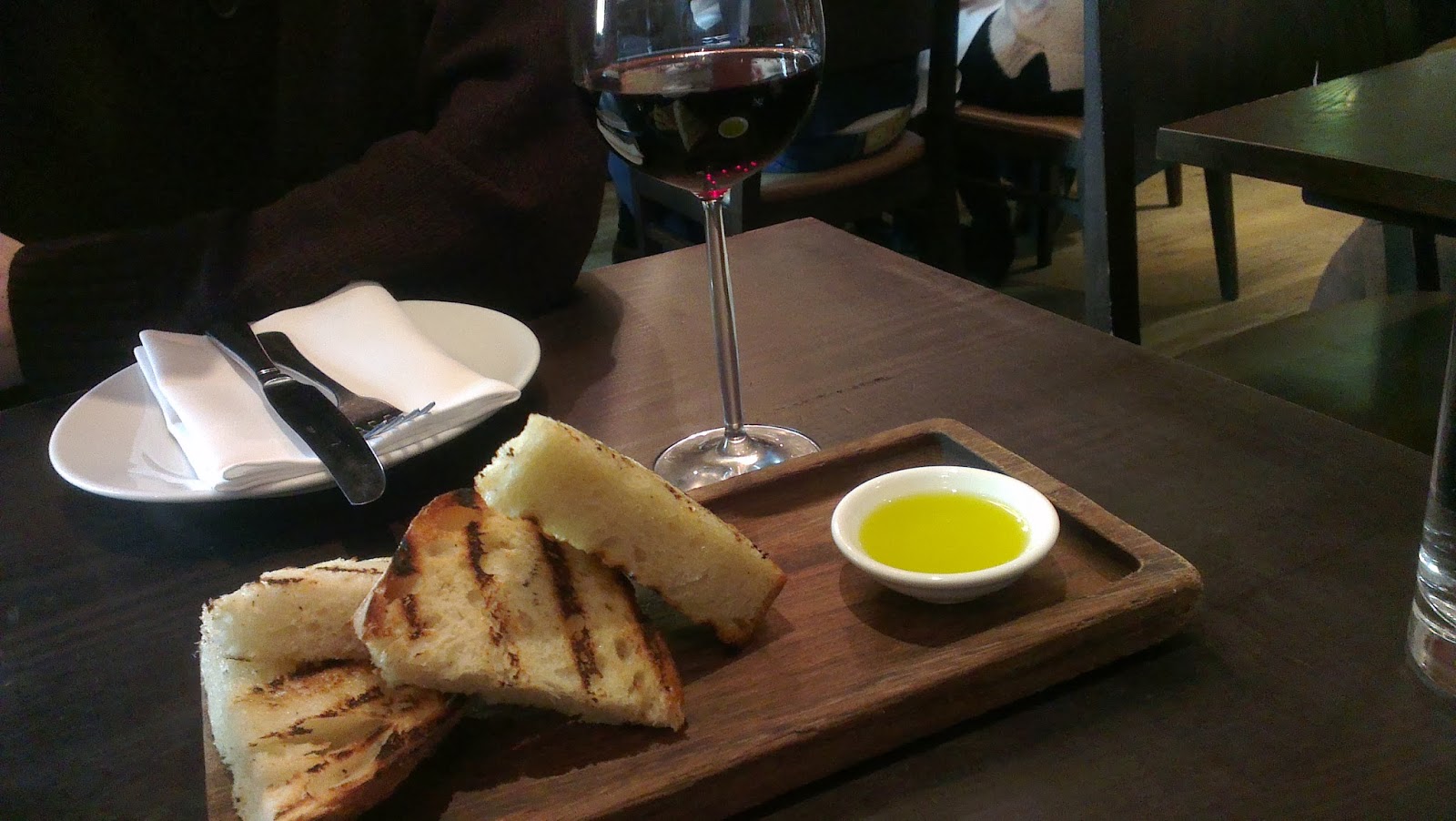 First things first - a portion of fluffy, chargrilled bread with a mild, light olive oil was lovely, and the bread was good enough on its own without the oil. Next up came the smoke haddock croquettes with saffron aioli. That aioli was not taking any prisoners with its full-on garlic taste. The haddock croquettes were creamy and fishy, but not overpoweringly so - very happy with those. 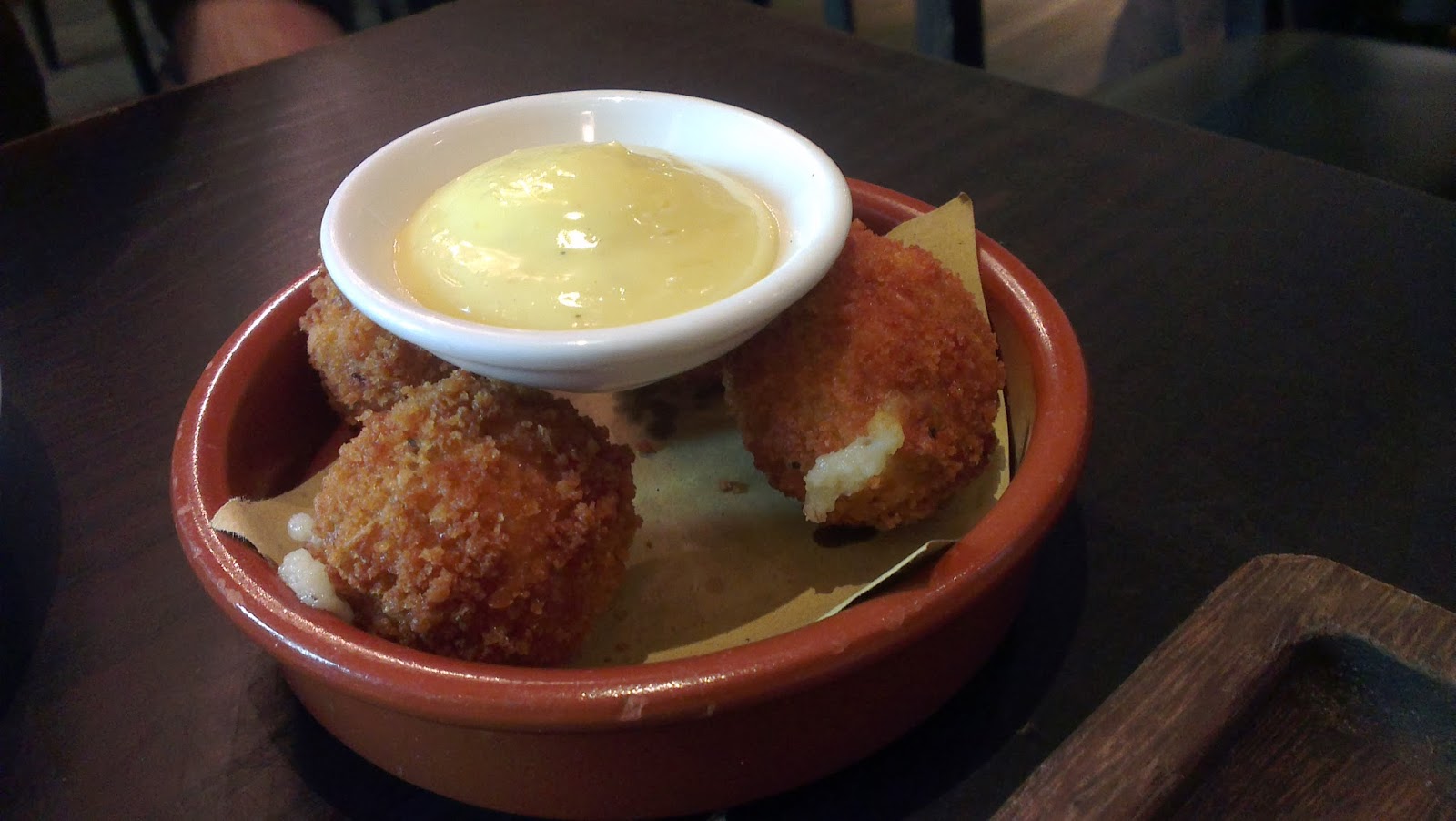 One of the differences between Salt Yard and Opera Tavern is Opera Tavern's grilled selections, so we made sure to choose something from that section. While the food was lovely on the whole, it was probably the grilled dishes that weren't quite as fantastic as they might have been. We ordered a beef and beetroot and a lamb neck and pear skewer and while they were tasty, they weren't quite as juicy or moreish as I thought they might be. There wasn't as much pear on the lamb skewer as I'd hoped – I thought there would be chunks of it cooked on the skewer – and there could have been more of the pomegranate sticky sauce the beef came with. 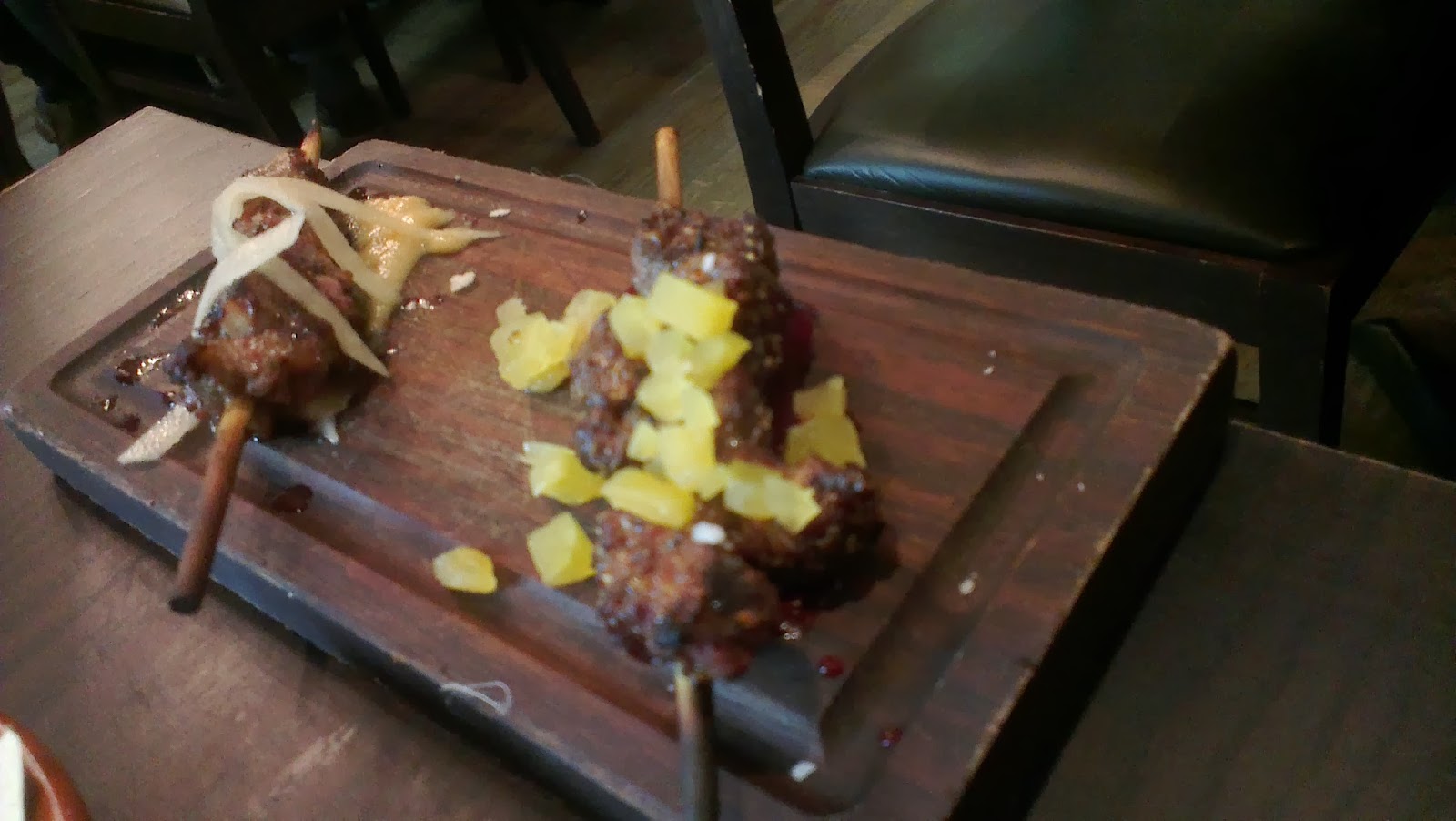 Another thing that marks out Opera Tavern from its sister restaurants is the focus on iberico pork, which they serve as a burger instead of just in jamon form. Taking advantage of this and the charcoal grill, we ordered the pork and fois gras burger. This didn't quite live up to its expectations on Stephen's behalf, but I really liked it. He thinks this is because I don't partake of the full joy a beef burger can give you but I thought the flavour was lovely, even if I was a little taken aback by the very pink middle at first. I liked the crispy onion and the sweet, charred bun, but must admit, didn't discern the fois gras making much of a difference to the porky taste. Stephen thought that it being served rare did its texture no favours and also lead to a lack of taste. I agree that I thought the firmer edges of the burger were the better parts. 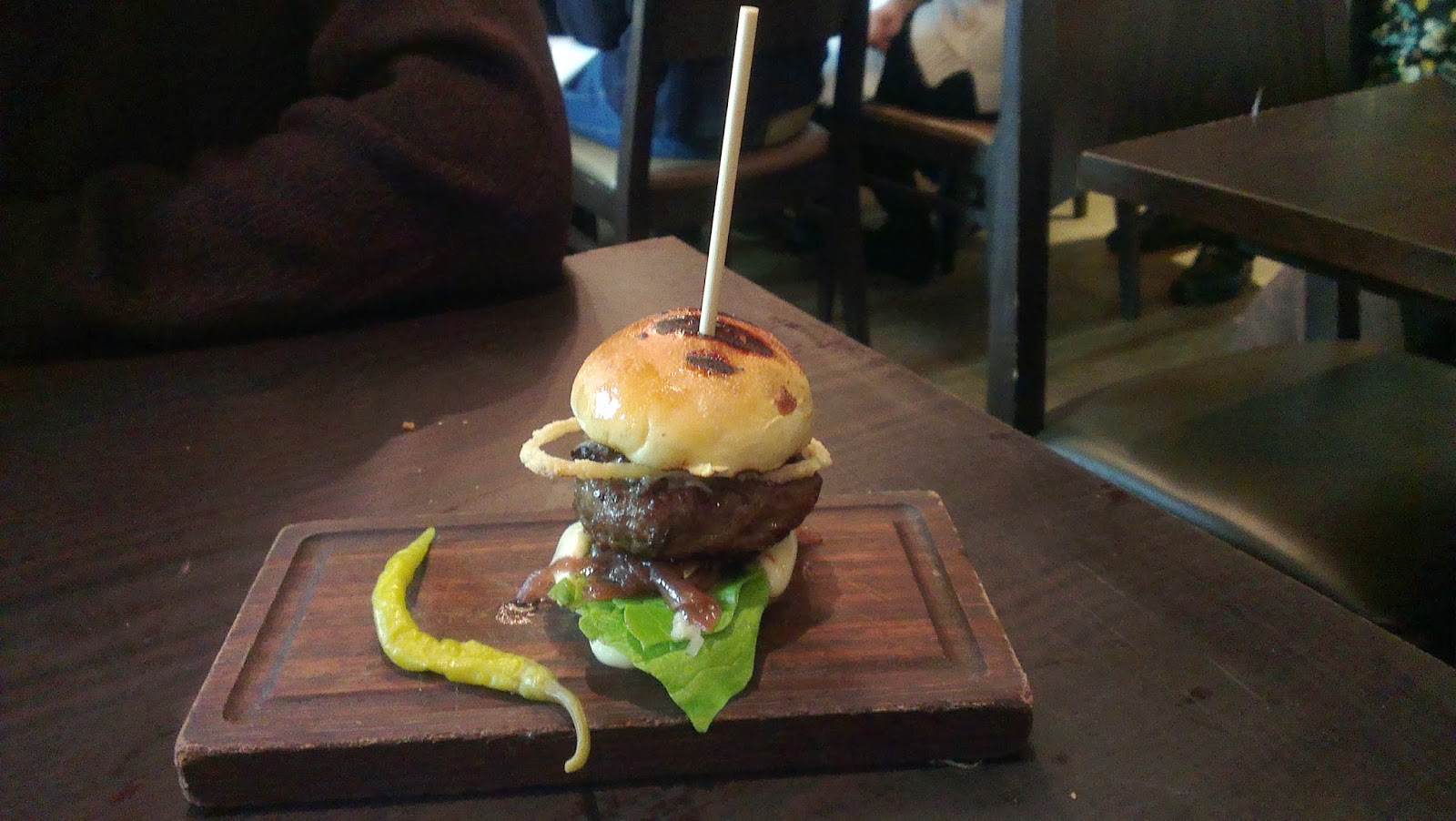 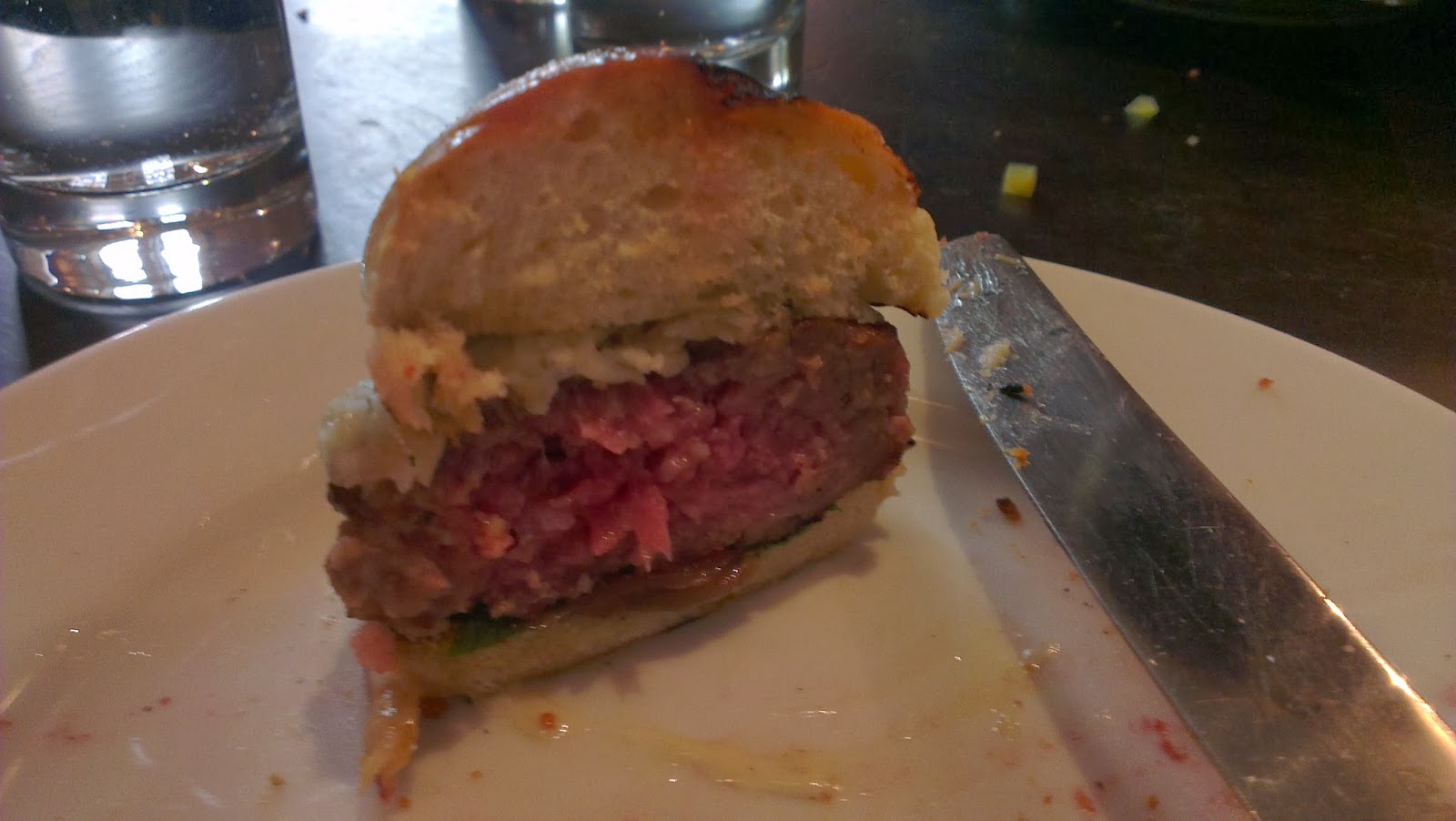 We then had a salad of ndjuja, honey parsnips and quail's eggs, and bavette with braised onions and trevise. The steak was my favourite dish - the bavette being incredibly tender and full of flavour and slow cooked onions pretty much always steal my heart. But the nduja salad put up a pretty good fight - the quail's eggs were perfectly cooked, the parsnips were sweet and the nduja was spicy, with some nice peppery and robust greens to make up the salad part. The spicy chorizo-like oil did a good job of making us feel like we weren't eating anything too healthy for our celebratory meal. 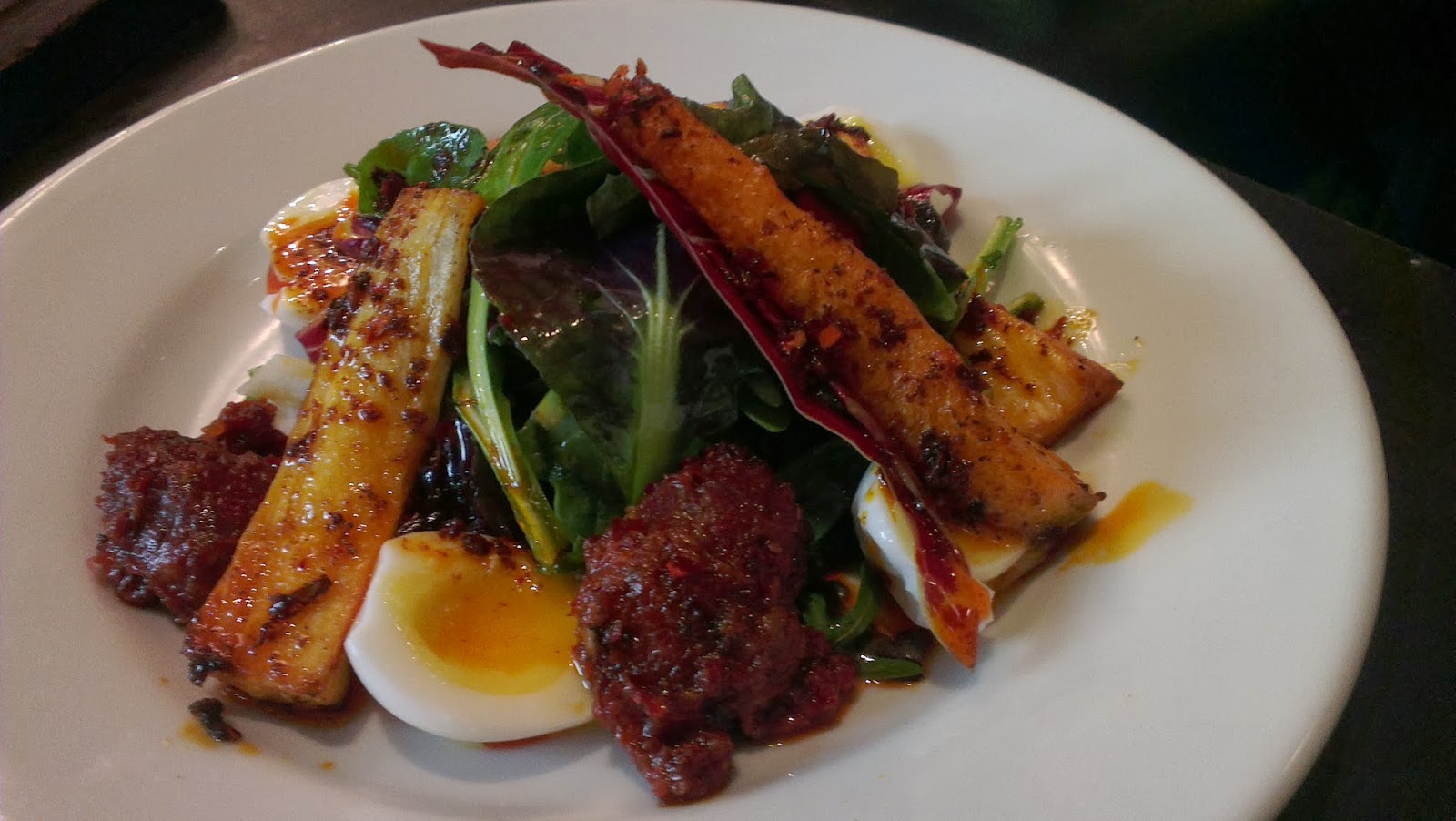 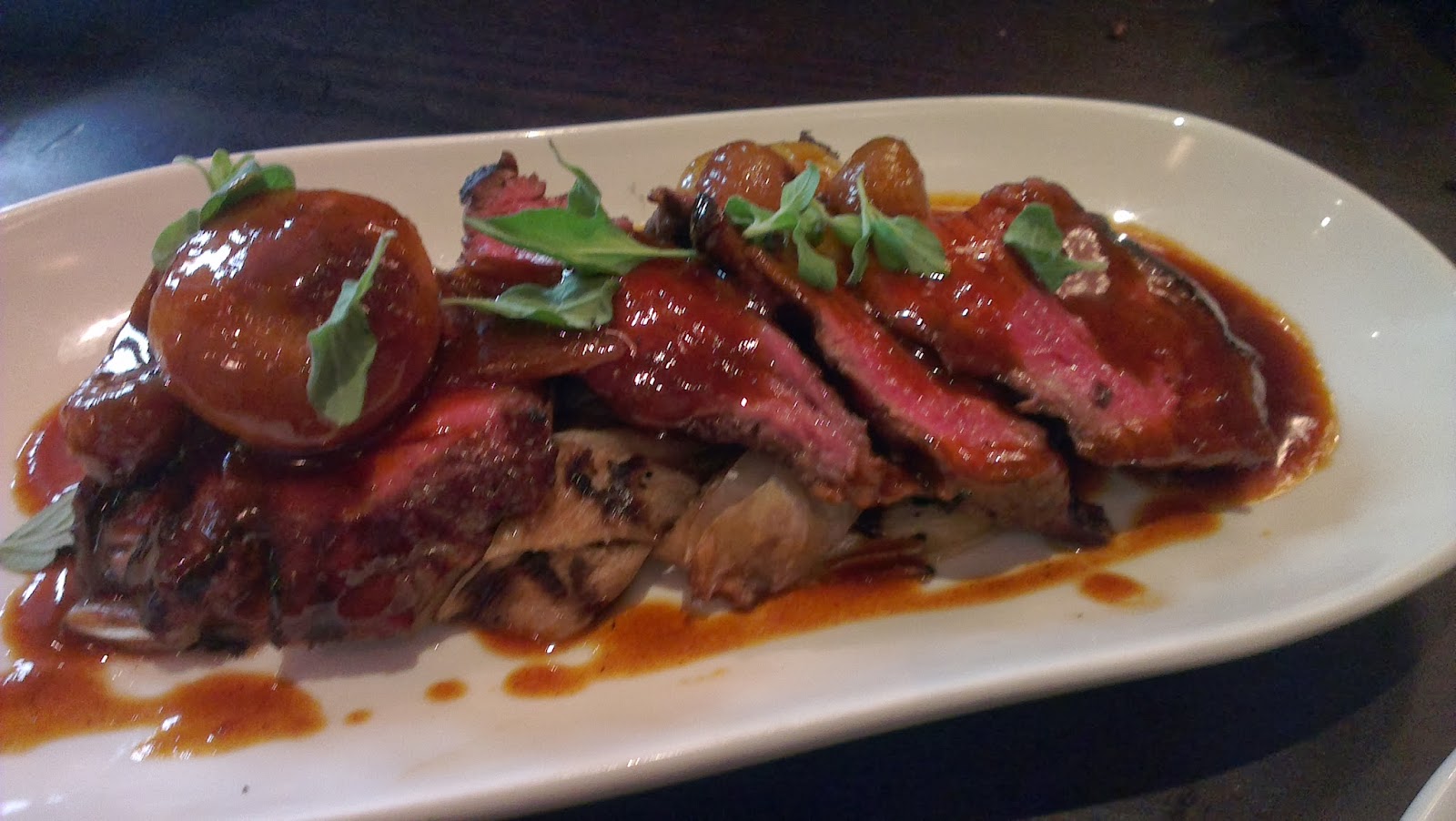 The only real disappointment on the savoury front was the monkfish with orzo and mussels which had a sauce which was a little too bitter for both of our taste buds. Whether this was the sea purslane effect or the choricera pepper I don't know. 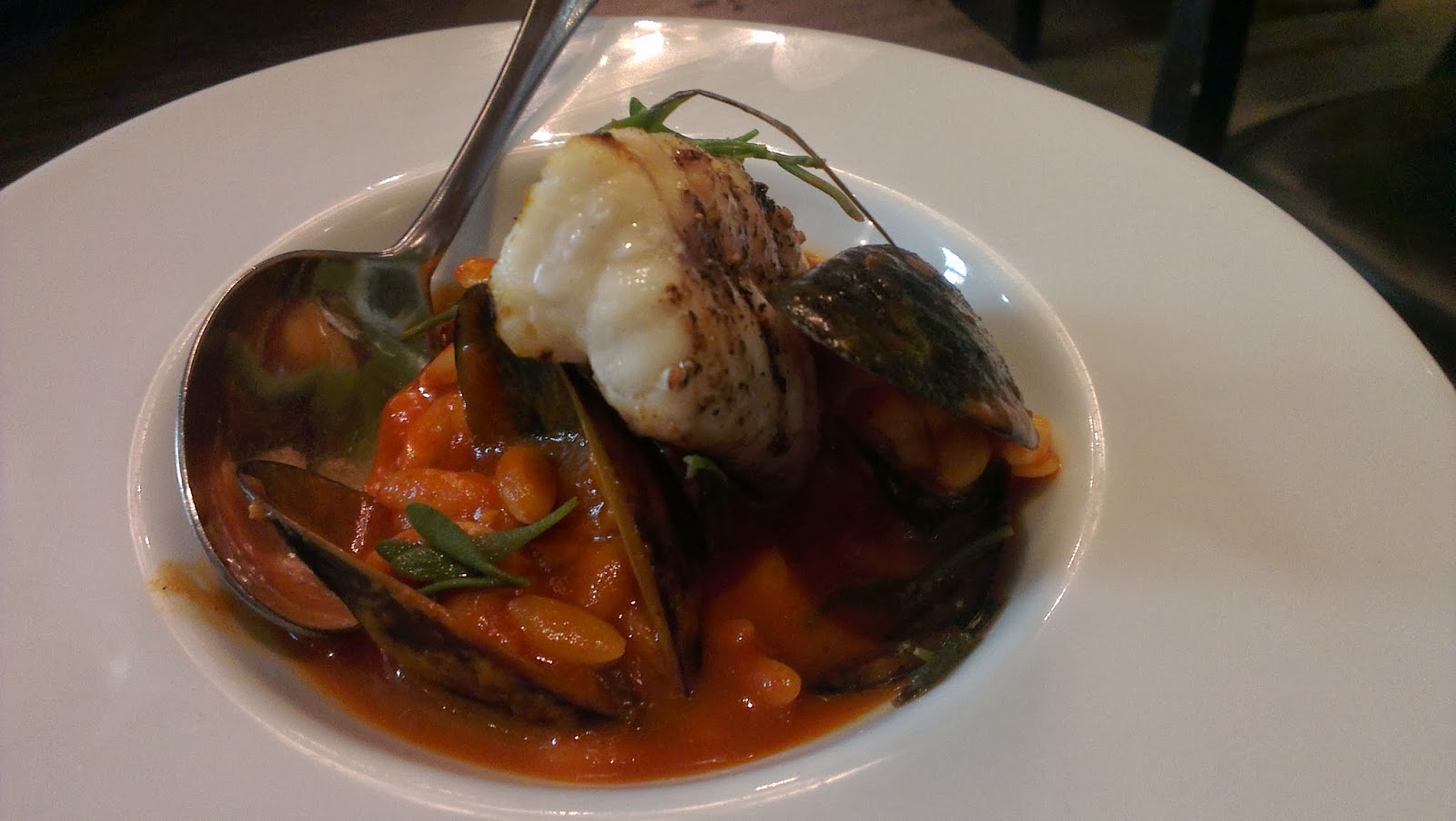 We weren't sure if we really needed dessert but two interesting ones caught our eye and we caved. I had the rhubarb with italian meringue and shortbread while Stephen had the blood orange tart. By gum were they good. Mine was like eating a thick eton mess (but without berries for once) - the shortbread was sprinkled on top, pieces of stewed rhubarb were laden on top and there were lovely chewy bits to the meringue, as well as a sweet rhubarb sauce. Stephen's tart was just that, with a lovely blood orange marmalade and caremelised pistachios. 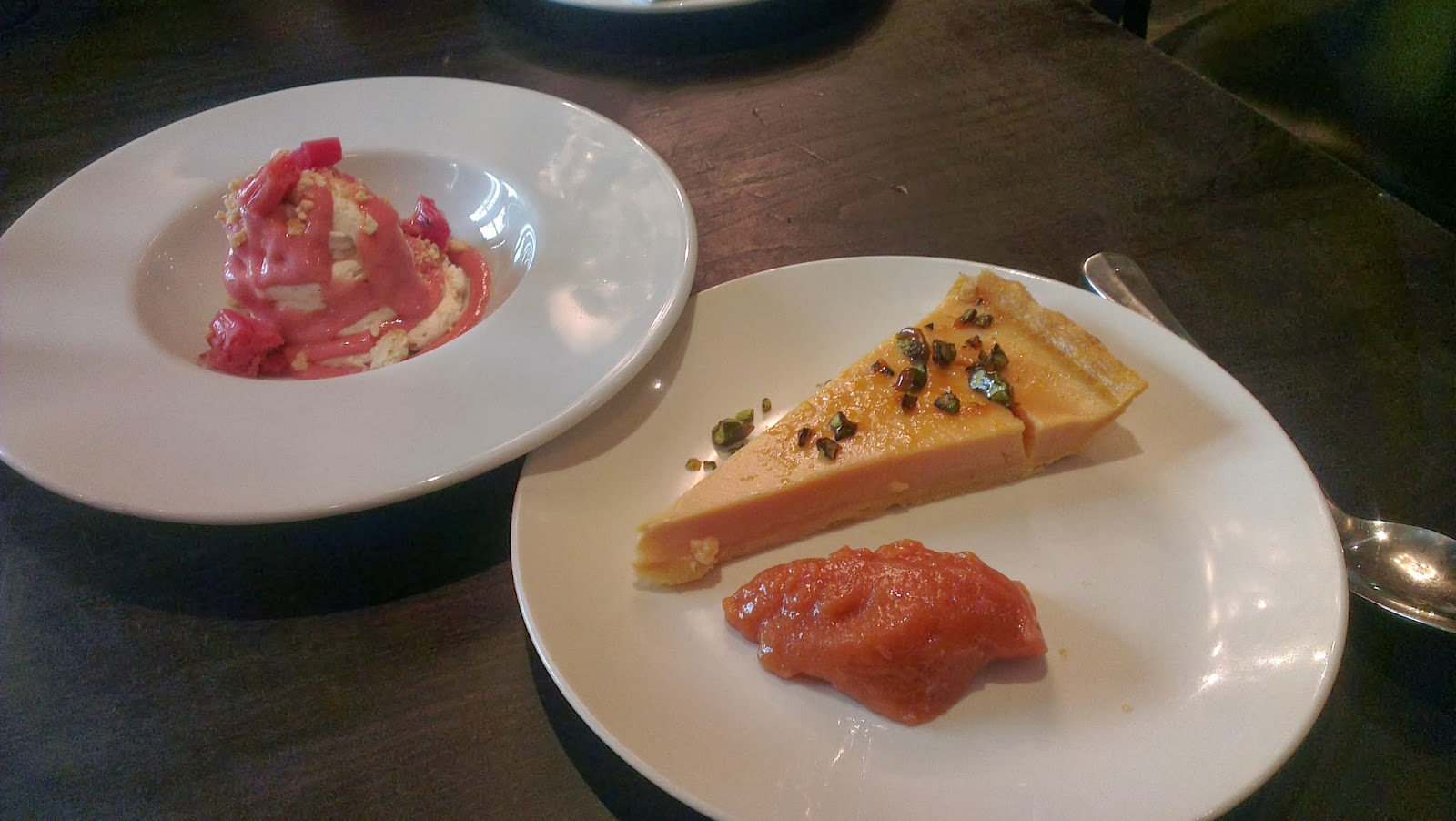 I enjoyed my meal at Opera Tavern - the food was accomplished, interesting, and mostly tasty. Stephen had a couple of Alhambra beers with his meal, which he very much liked and I had a very tasty brindisi reserva - a full-bodied red. I think I preferred the cosy intimacy of Salt Yard but allow that it might be purely down to the time of day we visited. However, despite having a lovely lunch, if I would return to one it would be Salt Yard, and I would try one of the others in the group before going here again.

Find the menu & restaurant information on Zomato
Posted by Ginglesnuff at 10:30 AM