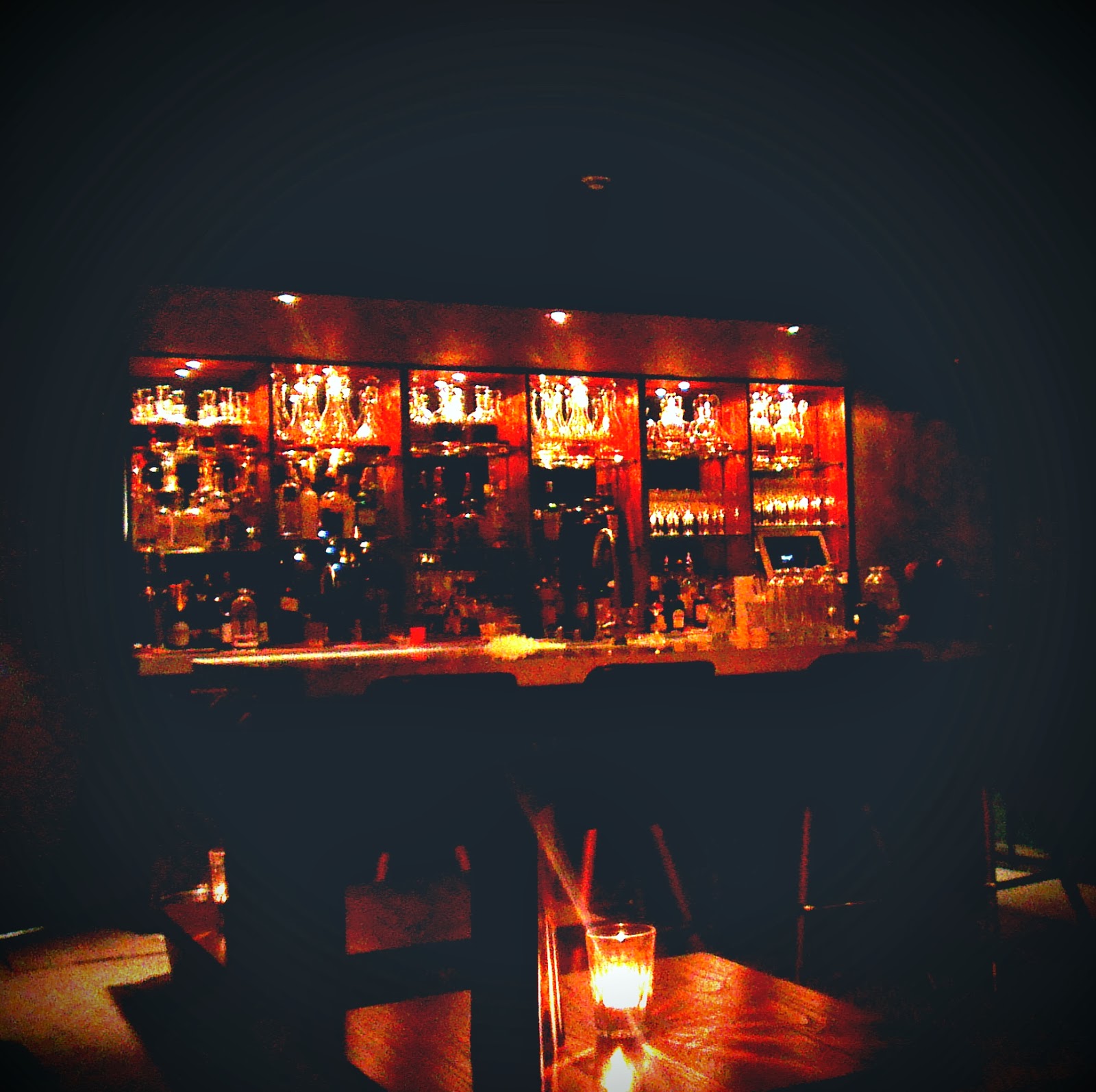 Having heard of the bar '&Co' underneath Central & Co just after Christmas, I was pleased to notice on Saturday that it is just opposite my friend's office and so would make the ideal place to go for a drink before having dinner. So we were a little disappointed when we walked in just before 6pm and the rope barring the downstairs bar was blocking the way. We enquired as to what time it opened and the girl upstairs was kind enough to go down and see if the bartender down there was ready to open up. He apparently was, and we went down and proceeded to have the whole place to ourselves almost up until we left to go eat. If we felt a little guilty about making Chris, the bartender get behind the bar when no one else was there, we felt even worse after he kindly explained the menu to us and the idea behind all the tasting notes and in the end all we did was order wine. (The original concept was to have only unbranded spirits, and you choose based on the tasting notes but this proved unpopular so they're gradually moving towards brands as per every other bar, which I think is a total shame.) We promised to come back and try something stronger later.

I had a mascalese from Sicily, a red wine I'd never heard of before but which was deep and juicy. Alison may have had a picpoul but don't hold me to that. Every wine was priced at £5.80 which I liked as you felt like you could take a gamble and order a wine you didn't know without paying more for the privelege.

We then dashed off so we wouldn't be late for dinner...

Blanchette feels a bit like a little country cottage - with little wooden tables, slightly distressed cabinets, and the water even comes in a cute little pottery jug. It was all very cosy. Perhaps a little too cosy - serving 'small plates' means bringing quite a lot of them to the table. We barely had room for all of ours at once and we only ordered four. And the tables are quite close together - I nearly swept someone's food off their plate as I tried to negotiate the space between tables as I was leaving. 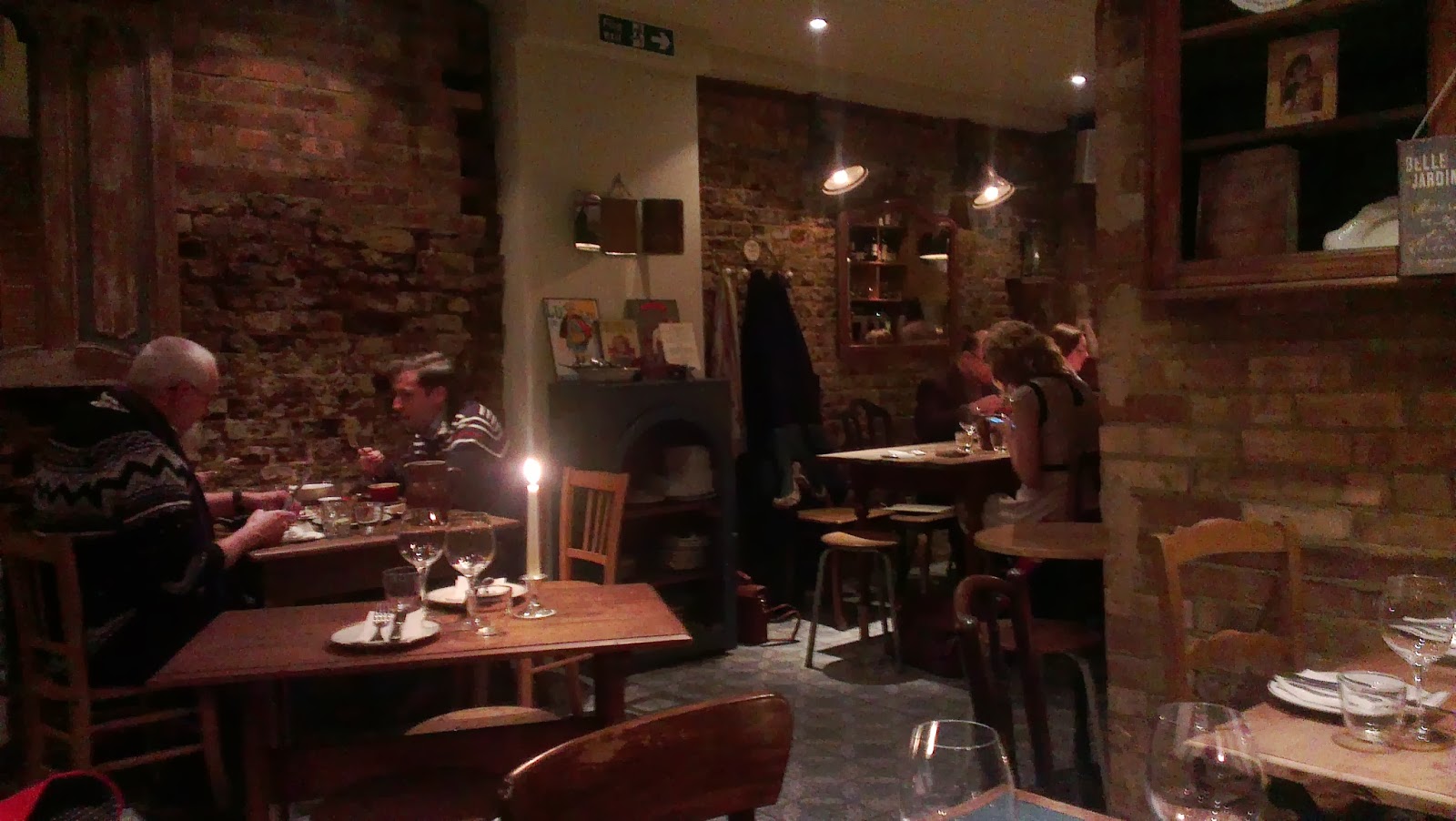 Apart from that, Blanchette was a lovely little place to eat. My friend and I were mainly using it as a backdrop to our conversation, rather than it being the main event - we wanted a few nice things to eat while we conversed and that is what we had. We chose one thing from each category - fish, meat and vegetables, plus a cheese, and some bread and butter. The bread came in a brown bag to keep it warm and was served with a pat of deliciously salty butter - so much butter that we didn't get through it all with our bread. Often it seems to be the other way around in restaurants and you have to calculate how much butter to take per piece of bread to ensure it doesn't run out before the bread does. 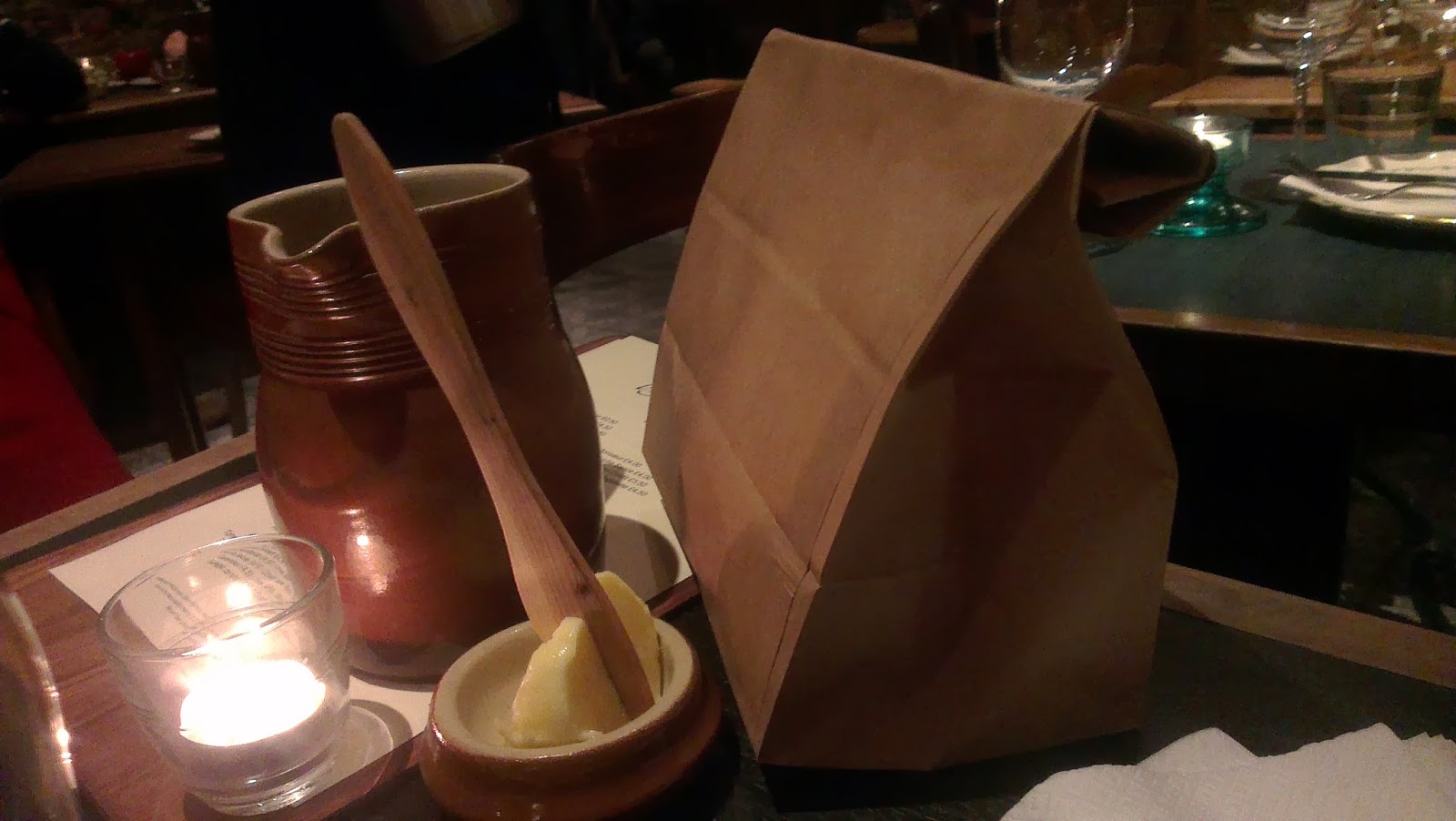 Next out came the Camembert supplied with three crispbreads, some chutney and some lovely herbs - chives and perhaps cress and parsley in a light dressing. The Camembert was at a perfect temperature making it creamy and easy to spread. The crispbreads were lovely but it did cross my mind that three was a strange number to provide considering everything is supposed to be shareable. We were glad we still had a bit of the bread to put the rest of the camembert on. 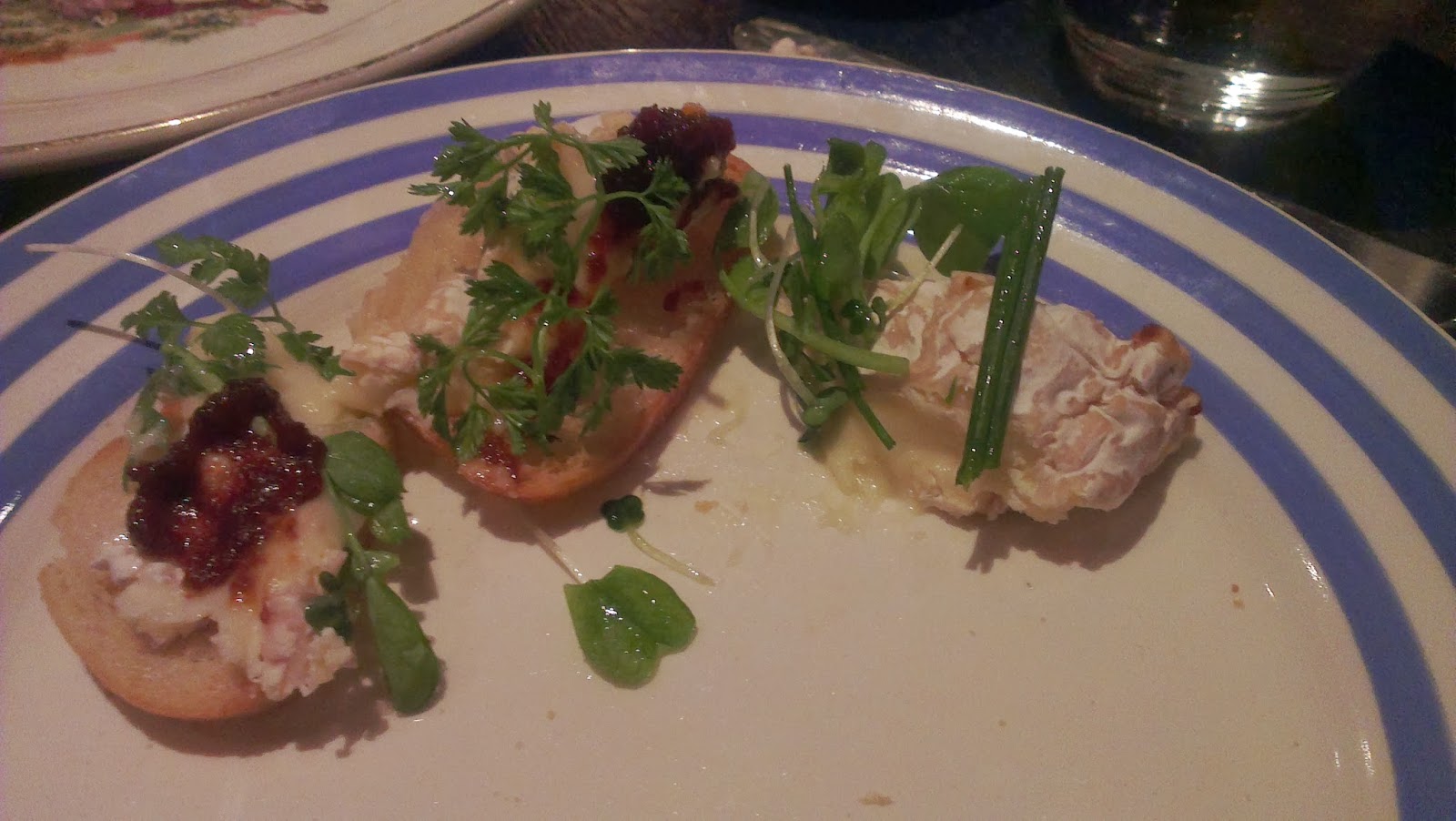 Our jerusalem artichoke and potato gratin rebluchon had a nice thin crunchy topping and a lovely firm texture with a cheesiness and creaminess that was just right - not too rich or overpowering. This came with the gurnard with capers, brown butter and braised cabbage that we'd ordered. Lemon provided a lovely zingy dressing to the dish. 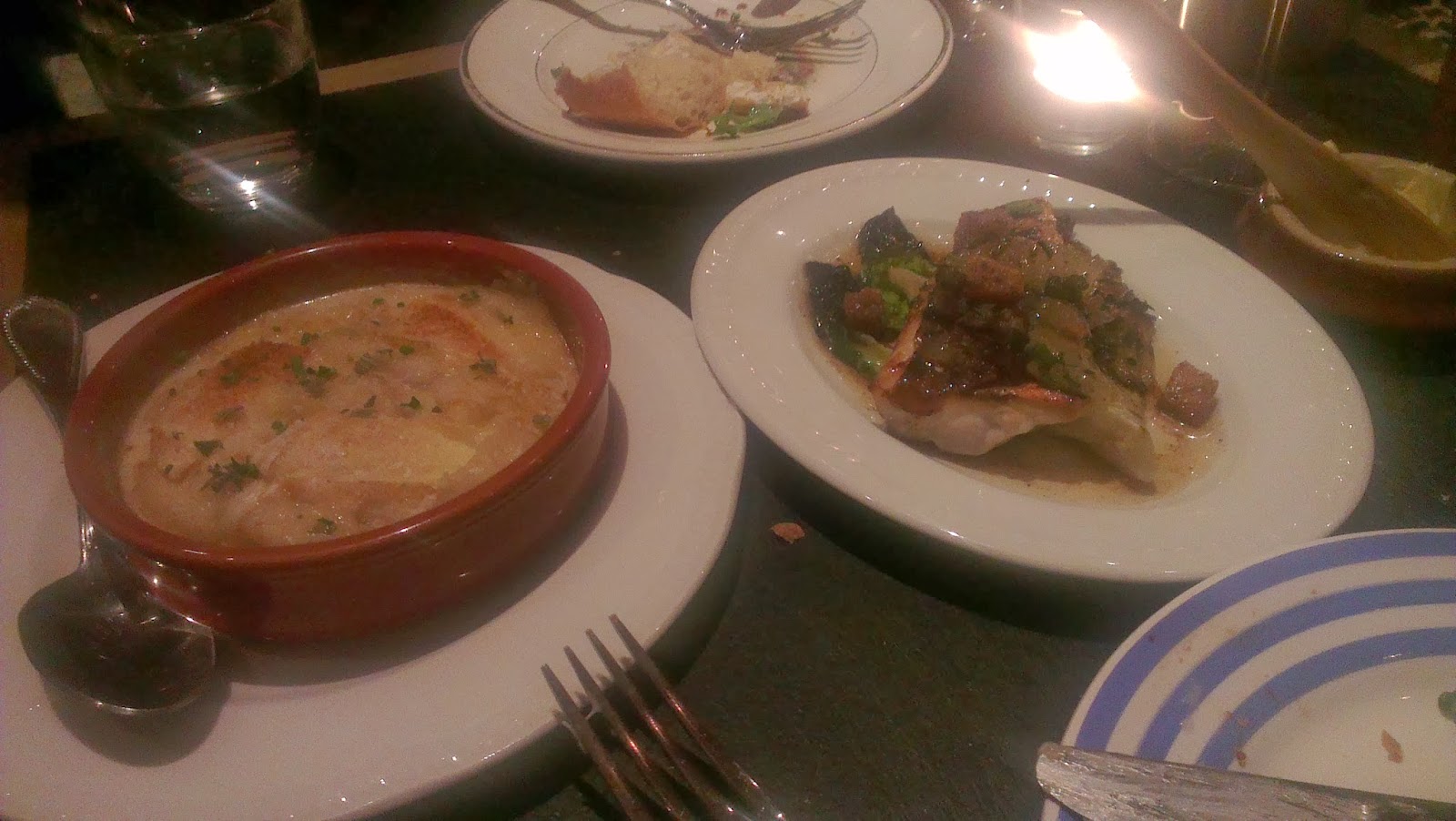 We were asked then if we wanted to order any more dishes, which gave away the fact that they had forgotten we had ordered the onglet with snails and salsify chips. This was very quickly rectified and was a delicious dish (though no, I couldn't bring myself to eat the snails) but also a very dainty dish, especially when sharing between two. The onglet was almost wafer thin, sticky and sweet - delicious. The two shards of salsify chips were had a crunch but were also quite fluffy. I desperately wished there had been a little more of it simply because it was so good. 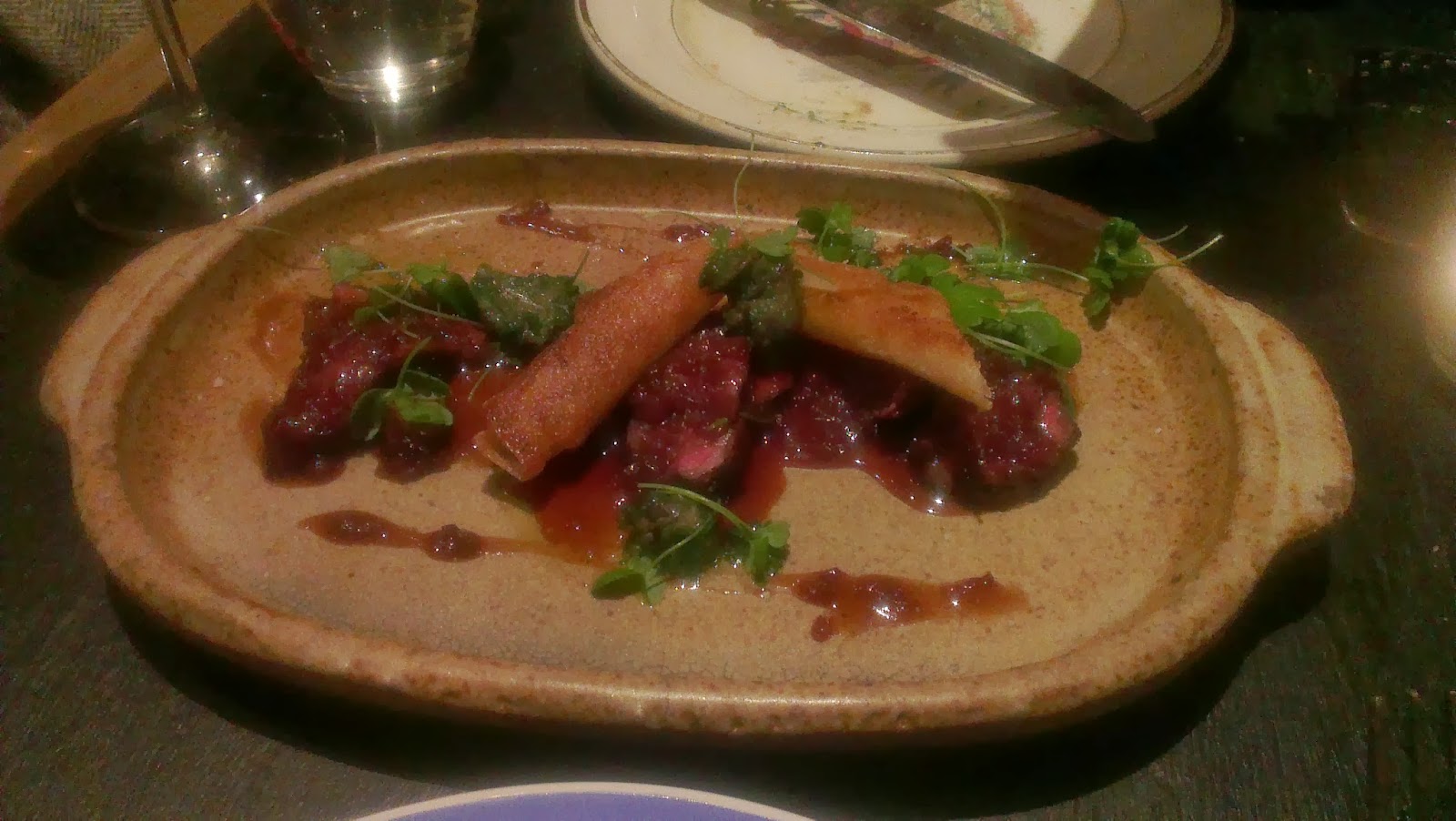 We ordered the cheapest bottle of wine on the menu - a vermentino which was only £18.50! Amazing to see a wine at that price on the list. And it was just lovely to drink.

Blanchette was a charming little place - perfect for a few light bites, and the prices were a joy as well - our meal came to about £25 a head.

I notice on the website that they mention the soundtrack to your meal and it is worthy of mentioning! It was definitely something we remarked upon as we found ourselves listening to a laid-back reggae version of Regulate, and a bit of Arrested Development.

True to our word, after that we headed back to Central & Co, for our stronger drink. For once I let myself order a slightly heavier, sweeter drink - a Chocolate Flip, which was a liquid dessert, that went straight to your head (in a good way). Alison also went for a slightly sweet option - the Great Grapefruit, which smelled of candied grapefruit and was gorgeous. They both were. 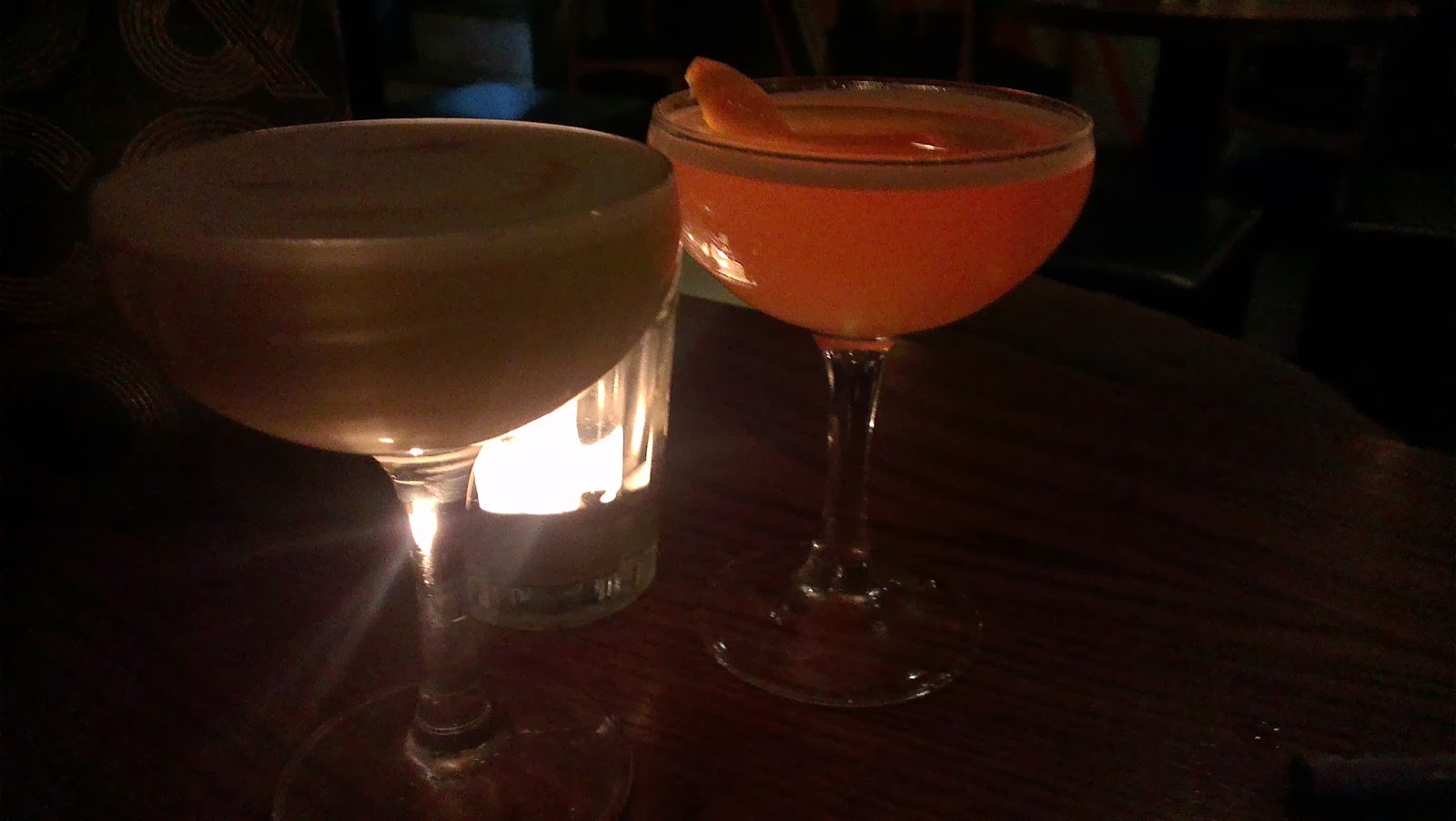 Central & Co is a stylish, spacious bar upstairs, but if you want someplace that is a bit more intimate and feels a little more exclusive then go to the smaller, darker '&Co' bar downstairs. And if you like the idea of being a little adventurous with your spirits, and having them served out of some beautiful decanters, then go quickly, before they have phased out this idiosyncracy. 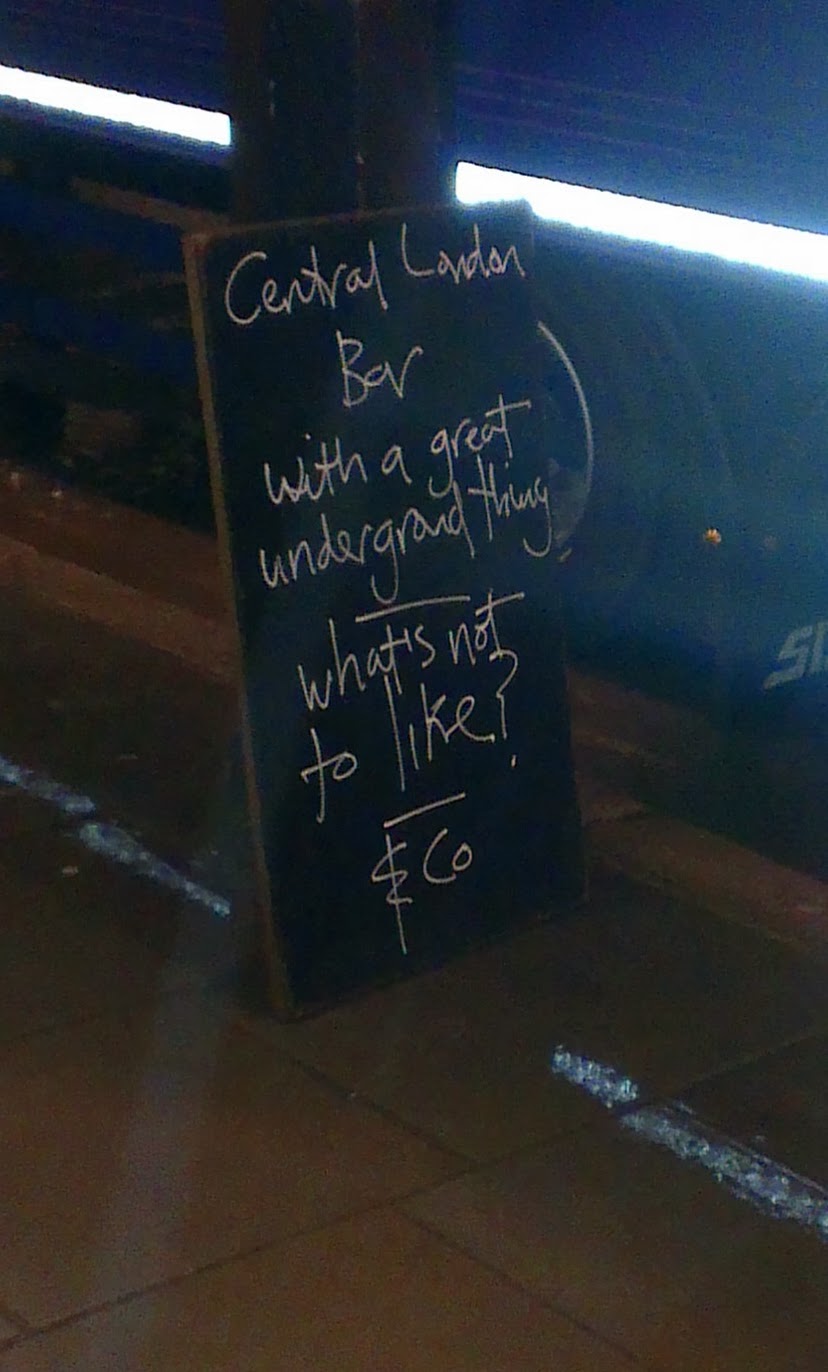 Posted by Ginglesnuff at 8:25 PM