To finish our faux Valentine's Day in style we headed up to Hackney Central, to the boutique Bohemia cafe/bar where the Manhattans Project take over every Thursday, and who had collaborated with Romantic Misadventures for the night.

Romantic Misadventures is a night of storytelling, based around love, romance or sex, and often the stories are of a biographical nature. But not necessarily so, and fiction and poetry are welcome as well. As you can tell from the name, tales of the joys of love aren't quite so welcome as recounting embarrassing and horrifying anecdotes from your romantic past. Which the host and several other guests were more than happy to do. In this respect it wasn't dissimilar to the very popular Cringe night. And free, too!

This wasn't a one-off night and I got the feeling that quite a few of the people reading had done so before, and that a lot of the crowd were part of a loyal following. I can understand why. The stories were all very funny, those that were true more so for being true and I had a really good night. Highlights for me included one girl reading us a list of her personal turn-ons, for example:
'Ginger women
Ginger men
Ginger bread
Any kind of bread'

Or there was the guy who read a work of art about Thaddeus Hardcock, the billionaire who had more than a passing lust for furniture, much to the dismay of the heroine who was trying to court him. This was a hilarious sending up of the Shades of Grey that anyone with even the most scant reading of the original text could appreciate. 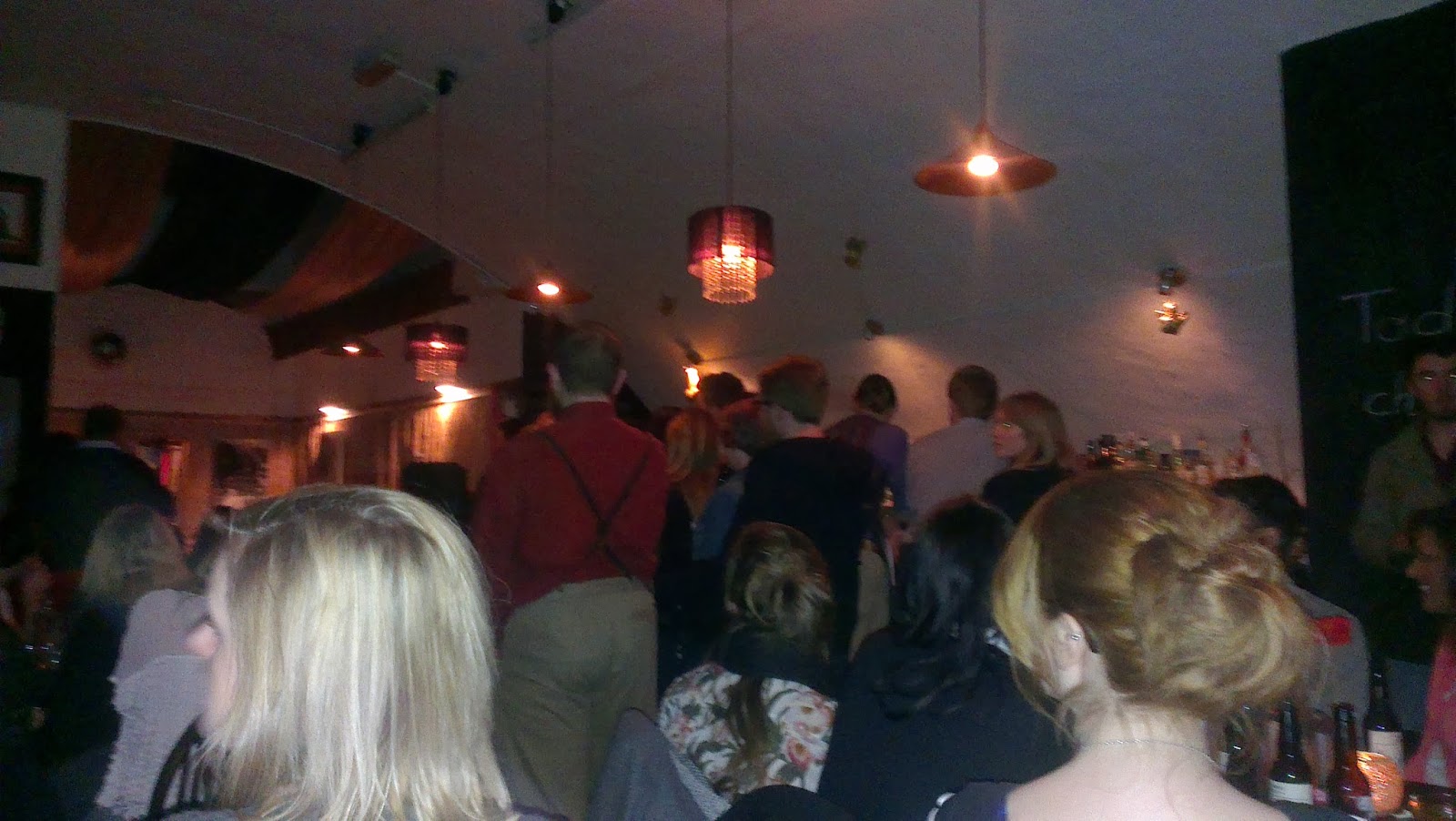 And the woman who, recently divorced, could NOT wait to start having all the sex. But it was a lot harder than you'd think to find decent people to have all this sex with, and we heard of several of her recent attempted conquests, including one young man who 'did a murder wee' in her toilet and then just shrugged it off.

I wasn't quick enough to note down the names of these brave and fabulous volunteers so if you happen to know, do tell me. Kit Lovelace was the consummate host, sharing with us a couple of his worst ever Valentine's Days to warm up the crowd. Would love to return some time, and may bring my Meetup group along as well, it's right up our street.

Alongside all of these were some fantastic drinks. The Manhattans Project had crafted a menu especially for the night, cocktail names which were an amusing read of itself. To wit: The Thyme Apart (which sold out before the halfway point, possibly because it was the cheapest cocktail) – "This ain't your Grandma's Plymouth Gin ... combo. Because ever since the accident she hasn't been able to move her legs, let alone mix drinks. How insensitive can you be? Here's to grandma." Irreverent much? 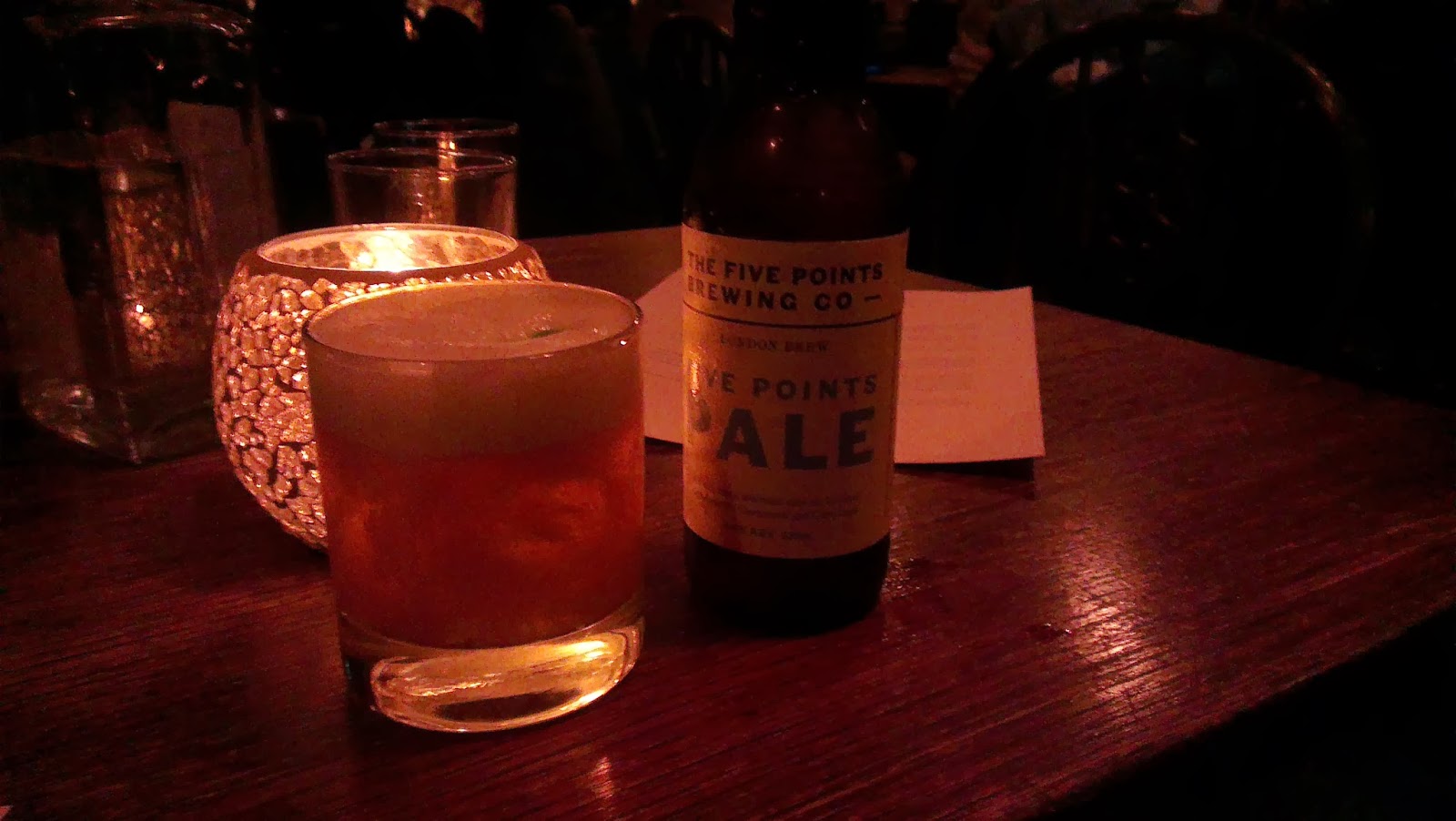 First up I had a Fake Orgasm which was my favourite drink of the night (and possibly, ever) and so good I can promise you I faked none of my enjoyment. I think it a little unfair to have named it so - The Gushing Climax would have been a more appropriate representative name. This (like most of the menu) was a whiskey based drink (well, bourbon) topped with condensed milk foam that was thick and sweet and gradually sank into the rest of the cocktail as you drank it. After sipping mine, Stephen made sure to have one before we left.

They had one white wine and one red wine on the menu and I had one of each. Must admit I wasn't a fan of the red wine but the white was a Picpoul which is always pretty reliable. They were also serving Five Points Pale Ale as the beer, which Stephen hadn't had before but will likely be seeking out again as he really liked it.

We had a couple more cocktails between us - my last was a Sex on the Beach with whisky and 'really good schnapps'. This was no ordinary, too-sweet fruity cocktail but one that was properly grown up. Stephen had a Manhattan as his first cocktail, which, you know, is kinda the Manhattans Project's thing, so had to be done. That came with a cherry sunk in it - saved to last so it was completely alcohol-sodden.

The venue itself, Bohemia, seemed cute, a little ramshackle with several wooden tables for four and lots of arty stuff on the walls, low-hanging lights and the comforting rumble of the overground above it. Perhaps a little hard to judge the place when it was overshadowed by the Manhattans Project takeover and the Romantic Misadventures on stage, but it seemed like the kind of place you could get cosy in with a coffee, or come for a bite to eat of something homely, with a laid-back atmosphere. I shall remember it's there, nestling under the arches of Hackney Central for the future.
Posted by Ginglesnuff at 9:38 AM