I've been lucky enough to be one of the seemingly legion of people who are taking part in the Chambord Cocktail Challenge. The arduous task is to visit eight different cocktail bars in the Fitzrovia area, have two free cocktails and then rate each venue on their cocktail-making abilities. Every bar is supposed to serve you a Chambord Glamour and then another one that they have invented using Chambord. Each bar signs your 'passport' to prove you've been there. It's been a great excuse to discover some new bars, and happily, two of the bars taking part were already on my List so I got to try them out without taking too much of a hit on my wallet.

We actually started out at Oskar's bar below Dabbous, which was a very comfortable, stylish place, and given the hype of the restaurant, we expected the cocktails to be sky-high in price. Not so - at about £10 they were less than you'd spend in a place like Worship Street Whistling Shop. Our cocktails were beautiful and the bartender was friendly (in all three places we sat in the best seats of the house - the bar). I can't wait to go back and we only ventured on as I wanted to get through a couple more places in my 'passport'.

Then we moved on to Crazy Bear. 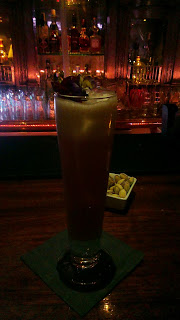 On the one hand you can hardly miss it, with its wall of lights signifying its existence, on the other hand if you're looking for a sign to tell you you're in the right place, you'll be looking for a while. Instead a paw mark denotes your location and it was only as we crossed the threshold that I saw the name on the floor as you go in. The cocktail lounge is downstairs, with the restaurant upstairs and it is a hugely glamorous, seductive room with lots of plus booths that were occupied with snogging couples. Music is up-tempo house so it felt like the weekend even though it was only a Tuesday night. This is definitely the sort of place to take a date if you want to impress - and with a similarly impressive price tag on the drinks. Cocktails are the order of the day here and prices start at £12.95 for your normal martinis and other classics and range all the way up to £18.95 for 'luxury' cocktails. Luckily, as we were there for the Chambord challenge we didn't have to fork out these prices, although with such interesting creations I was sorely tempted. If it hadn't been the night before payday when I was pretty brassic, I probably would have gone for one (a cheap one). Instead we enjoyed our freebies, which were possibly the favourites of the night, and managed to look like total freeloaders by ordering some pistachios that turned out to be complimentary. At least, I hope they were as we didn't pay for those either! If I had some cash to splash I would definitely return here - my marmalade concoction was the standout drink for the evening and I bet some of their other creations are just as good, if not better.

One last thing to mention is probably the toilets. This must be the reason behind the use of 'Crazy' in the title. Firstly you have to find them, which is no mean feat, as the doors merge seamlessly into the walls (one of the bartenders kindly showed me the way) and then you walk into a Hall of Mirrors. It is advisable to feel your way along otherwise you might just walk into the wall as I nearly did! All the mirrors make it seem there is a space where there is none. The sinks are rather flash with an automatic waterfall to wash your hands in. So very, very glam! 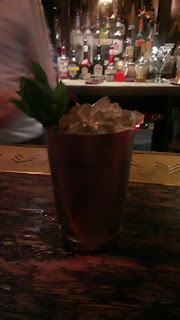 From one extreme to another (yet still with an animal theme I'm just realising) - whereas Crazy Bear was all about dressy excess and exotic drinks, The Lucky Pig is a casual establishment more focused on having a good time. It serves classic cocktails and they're all a much more manageable £9.50. But, again, we were here for the Challenge so at first we didn't look at the regular menu. Instead, upon proffering my Chambord passport, I was shown a specially created Chambord menu with four to choose from. Contrary to the rules we didn't have the Chambord Glamour 'control cocktail' as one of the cocktails - instead I had a julep and Stephen had an Isadora Belle - a fruity number with bubbles. 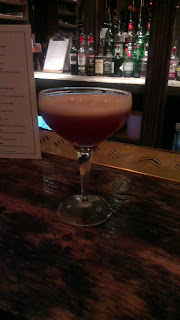 Both were very nice to drink and persuaded us to have another from their regular menu. We decided to stick to traditional gender roles for this - Stephen had a masculine old fashioned and I had a feminine cocktail that blended wine with mango vodka and elderflower. It was a cool and refreshing drink but still a little spiky from the vodka. Stephen's old fashioned was a very good one, not being too overpoweringly straight alcohol but still plenty strong.

We then chatted to the bartender quite a bit who was telling us about what goes on each day of the week and the ethos of the bar being about somewhere you can have a dance on the weekends while still enjoying a good drink. The bar decor itself reflected this - it was definitely channelling the distressed glamour look that Shoreditch and Dalston do so well. It reminded us of Ruby's although in this case, the look was undoubtedly manufactured. The music, even on a Tuesday was fairly crowd-pleasing - some Alt J, a little James Brown, Ray LaMontagne. I can imagine them playing more of the same, but more upbeat on the weekends.

Finally we stopped off for a 'regular drink' (read: beer and wine) at The Albany which we discovered when we went there for Scared to Dance. 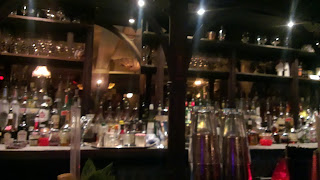 Fitzrovia has impressed me in general with all of its cocktail places (I am counting Shochu among them) and there is a bounty of nice places to eat. I feel a Fitzrovia night out coming on...

Posted by Ginglesnuff at 2:29 PM