Sometimes what you need as a pick-me-up to combat the Sunday blues is tapas and cocktails. Which is exactly what Mockingbird provides. Having not seen my best friend for a little over a week (we consider that a long time now she's in London) a catch up provided the perfect excuse to indulge a little on a Sunday.

We had an early dinner so got to Mockingbird at about 5:30. There were a few people inside and all of the outside seats were taken but it was far from busy. As we perused the menu, mouths salivating and eyes opening in joy at the many references to bread, we found it hard to narrow it down. We decided to pick a couple of dishes to start with and then add to that if we needed any more. 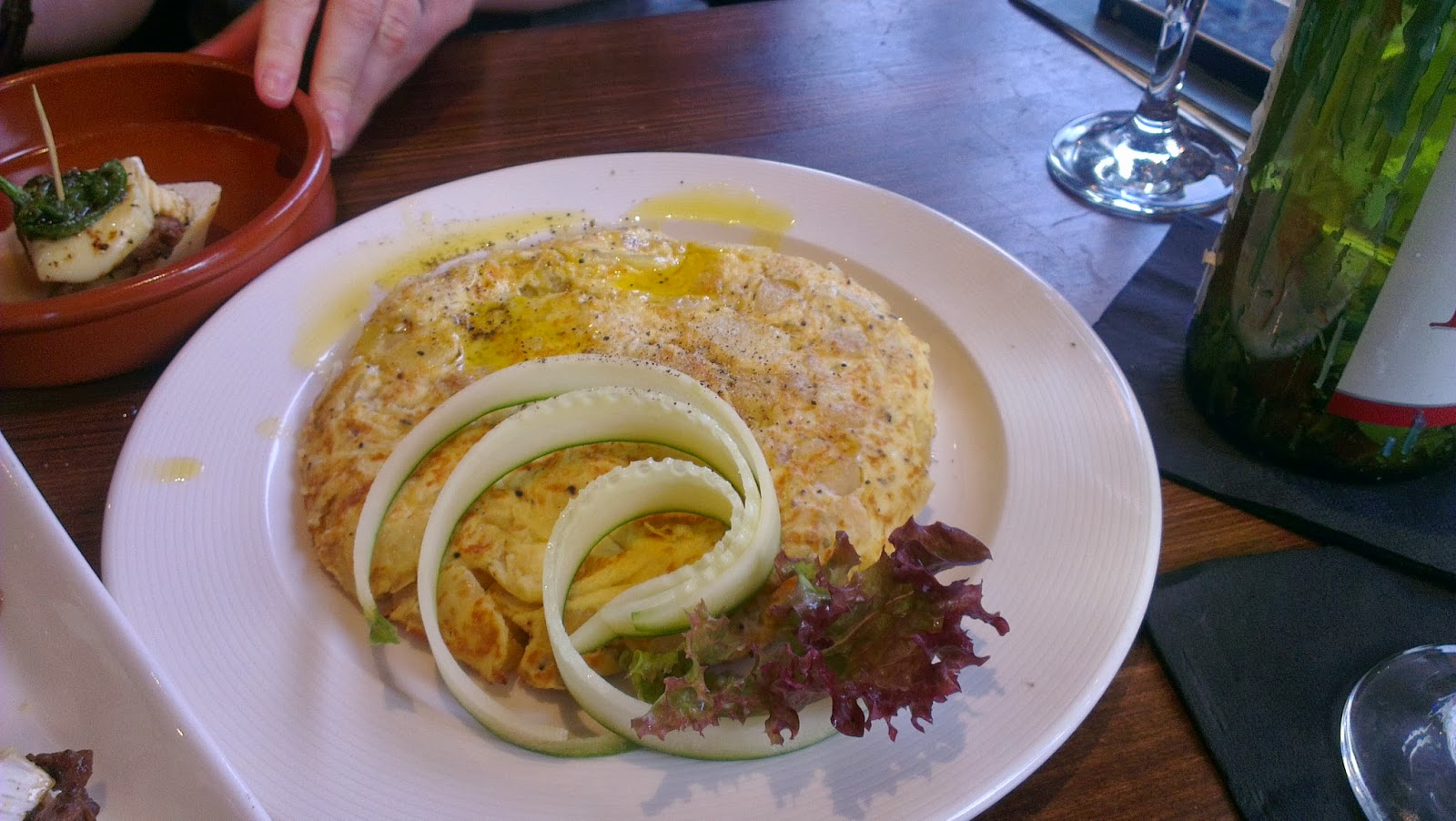 So first, probably my two favourite dishes - bifinhos and tortilla. The tortilla was a basic Spanish omelette with potatoes and onions. The bifinhos were slices of beef on bageutte topped with melting brie and a padron pepper, and drizzled with oil. A simple dish but really enjoyable to eat. Likewise the tortilla, which was a really good sized for sharing. All the dishes in fact were large enough to be shared without feeling gypped - we only ordered four dishes between the two of us in the end but I felt more than full. Makes a nice change from eating in 'small plates' restaurants and still feeling hungry but not wanting to order any more because of the prohibitive cost. 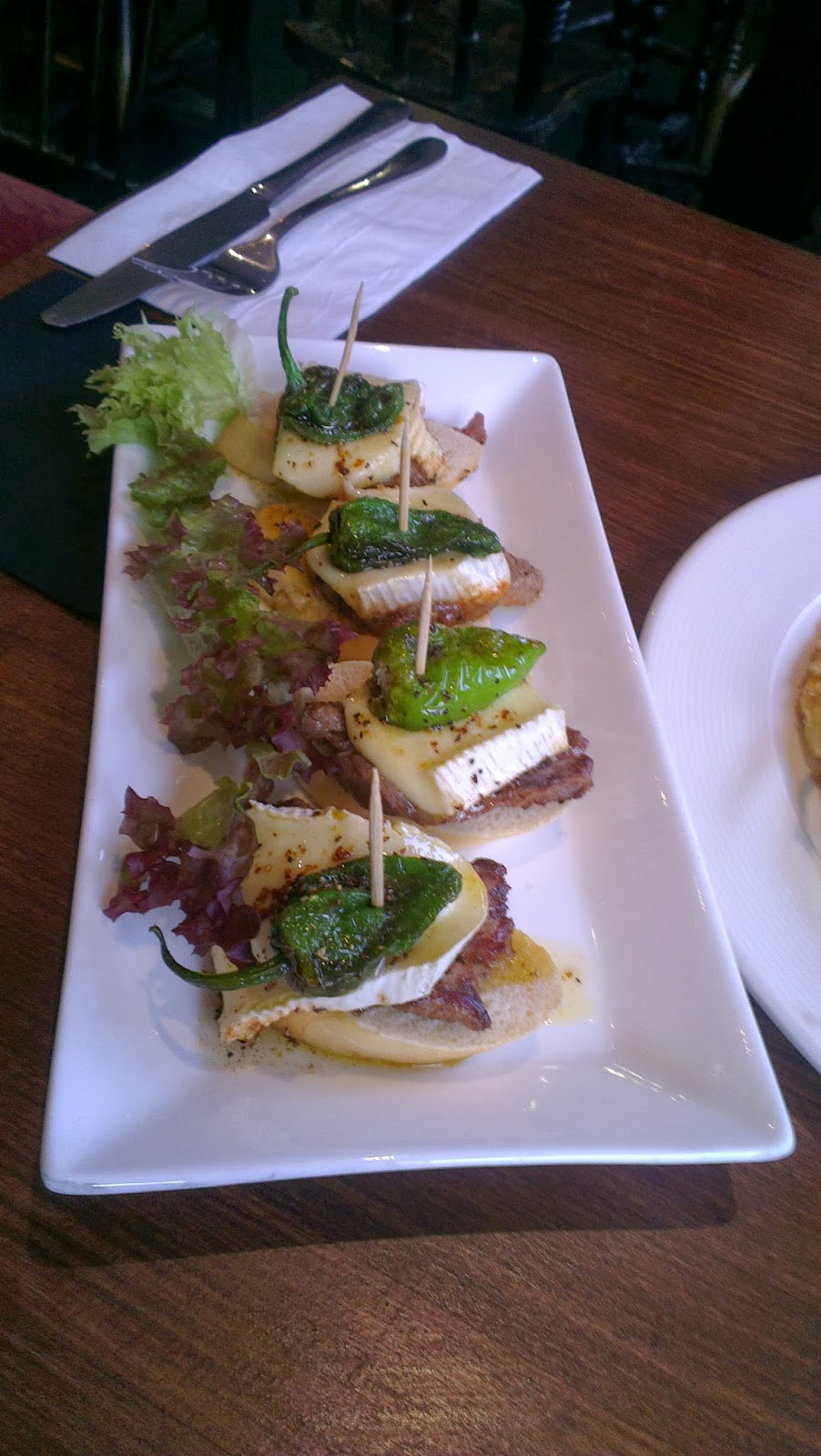 Our second two dishes were the croquetas con pollo and the langostinas. Both came with aioli (which could have been a little more garlicky in my opinion). The prawns came skewered together and peeled garnished with (which is what drew us to the dish) grated egg! It worked rather well but after having two or three of them I realised my allergy was kicking in and I had to give the rest to my friend in exchange for more balls. It's always good to have more balls. These were quite dense balls of shredded chicken, and with the addition of some salsa that we requested, a pretty tasty snack. 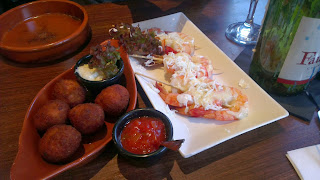 We accompanied our dinner with a couple of glasses of white wine, but decided that for 'dessert' we should have a cocktail. Most of them are very reasonably priced between 5 and 7 pounds, cover the expected mojitos and sangria but with a few more interesting concoctions such as the Micelada that I had and the Santiago which Alison had. The Micelada is a beer based cocktail (that's the second I've had recently after Dead Dolls House!). It's like a bloody mary but with beer instead of vodka - so it has tomato juice, lime, some spices and hot sauce. It was very peppery. If beer always tasted like this, I'd be a convert.

Alison's Santiago had a reassuringly bourbon taste to it that was lifted and sweetened by the cranberry juice, cucumber and grapefruit juice. It was very refreshing without being too much like lemonade.

Mockingbird may not have provided culinary fireworks but it did provide solid, filling good cooking for reasonable prices. I'd happily go back. I caught a glimpse of the homemade nachos which looked reassuringly fried!

Three drinks meant we weren't in the mood to go home so we headed off to the Ridley Road Market Bar where we were offered a taster of their well-priced wine before ordering a carafe, and finished off the night with a £5 mojito each. It's such a cute, quirky little bar - with its Hawaiian/tropical feel you wouldn't expect to find it tucked past all the smelly fishmongers!

Find the menu & restaurant information on Zomato
Posted by Ginglesnuff at 12:58 PM