On Monday night I think I rather spectacularly failed to make the most of my visit to Fernandez & Wells (Lexington Street). I have wanted to go to one of the branches for ages, since being told what great wine they did. And then, when I finally did go, I didn't even have any wine!

I was seeing a friend I hadn't seen in almost a year and there was so much to catch up on, we spent the first half an hour talking before we even looked at the menus. I did, however, order something to eat - the name of which has escaped me - a vegetable ragout of peppers and onions with a poached egg on top and served with some toasted sourdough bread. It was very tasty, although I must admit, I thought a bit of spice to it - either in the form of chillies, or black pepper, or some spicy chorizo - would have been a welcome addition. It was still very nice to eat and not a bad price at £8.00. My friend ordered the raclette which was a very generous amount of melted cheese all over more sourdough bread and topped with cornichons. 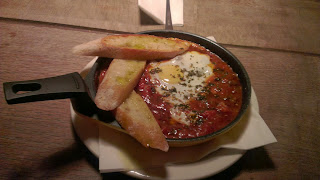 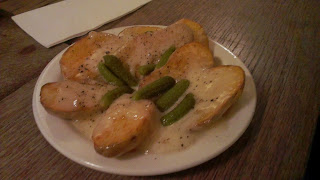 And then we chatted and chatted some more, and by the time I said I was going to get myself a glass of wine, the staff were basically winding down for the evening and were at the other end of the bar doing the washing up. In a way it was quite nice that they left us to it and didn't pester us to order more once our food was done - clearly, if you want somewhere to while away a few hours this is the place to go. On the other hand, I thought maybe just asking us if there was anything else we wanted wouldn't have gone amiss. They would have got an extra bit of money out of me for it. There were plenty of people in there solo, reading or doing a bit of work with a small plate and a glass of wine. When we got there it was still fairly busy but by 8:30 or so, it was practically empty so it's a pretty good place to go later in the evening for a quiet drink and a bite to eat.

Posted by Ginglesnuff at 4:39 PM