Friday night was a very special night. My friend Alison and I celebrated the fact that we have known each other for 20 years now. We have a reputation for cramming a lot in on a night out and we surpassed ourselves this night, but I won't go into too much detail on every place we went as a lot of them weren't on my List. Only Portside Parlour and The Dolphin made it onto that.

First a quick cocktail in the Covent Garden Cocktail club as part of the Chambord Challenge. It was incredibly lively in there and the bartenders had a certain flair with fire. Consdering we were in there at 6:30 and the atmosphere was in full party mode I'm sure this would be a good place to come for a longer night out. 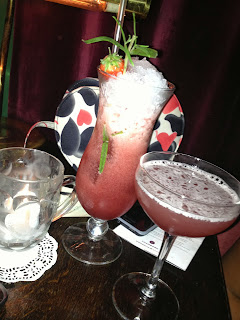 We then went to get another free cocktail at the Salon bar in L'Atelier by Joel de Robuchon. This was the spectral opposite of CGCC - sleek, smooth, high end. We had complimentary olives and met Mr Robuchon himself on the way out. Another cocktail place to impress a date.

And then, because we're not total heathens, we had something to eat at Vasco & Piero's Pavilion. This was my second time there and Alison's third or fourth. We split a creamy burrata and a tangy tuna sashimi to start (weirdly they went quite well together on the plate) and then I had a buttery, rich, lamb tortelloni with rosemary and Alison had the prawn spaghettini. Tempting as dessert sounded, with half a bottle of red with our meal, and, delightfully, a glass of prosecco on the house (did they know it was a special occasion) we felt too full to eat any more. 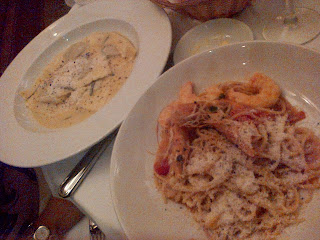 And so, we headed East. Northeast to Hackney where we managed to get into Portside Parlour before it shut.

I had thought it stayed open until 2 but when we got there at about midnight, we were told they were taking last orders. So we did have time for just the one cocktail (even though I'd been hoping to have more) in there before moving on, and I think this was my favourite of the night. They have a fairly small but well-crafted selection of cocktails. Portside is a rum parlour so that features heavily - the first page is all rum-based cocktails, but on the second they cater to rum unenthusiasts. My cocktail, the Aged El Presidente, described as 'rounded and boozy' was pretty much all alcohol, but with enough of a fragrance to be drinkable. Alison's was bourbon based and fruitier with basil. Beyond that we cannot remember and I'm blaming it on the strength of those cocktails. The venue itself was very cool. If you didn't know it was there, you would never suspect, but I did and so with determination we made our way through the crowds in Off Broadway to the very back where there was a sign pointing you down the stairs. Had the door been shut down there, even then you might not have been certain you were going to a bar, as the door makes it look like it's just another toilet. If you go through that though you enter a bijou little den of drinking, with candlelight and a musky illicit aroma. Just my kind of place. 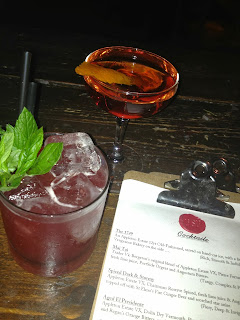 After this we went to the Cat and Mutton for a drink before they also called last orders and then went round to the London Fields for another before it seemed late enough to be appropriate to go to the Dolphin.

If you've been adding things up you'll probably guess that we'd had a few by now, but in the immortal words of the Dolphin's faux twitter account 'Fuck it, it's Friday!'. But it did mean our time in the Dolphin isn't exactly crystal clear in my mind. What I do remember though is that we had an excellent time. I had been there on a Tuesday or something for a drink before Buen Ayre, but rather suspected this was not the best way to experience the Dolphin. After the recent announcement that they may lose their late-night license (a travesty - they're appealing the decision) I thought I'd better get there 'toot sweet' to see this bastion of revelry for myself. Either it is always that busy (possible) or a lot of other people had the same idea for it was packed. We made our way from the little cash bar and courtyard sort of area to the main bar area I'd been in before, where we almost instantly made friends with some guys who lived nearby. What can I say, it's a friendly place. I think it was at about 5 am that they started kicking everyone out, but not before one last R Kelly song. By all accounts, talking to strangers and dancing to R Kelly is exactly what the Dolphin is all about so I think we did the place justice, even if we didn't have any 'Forgot about Dre'- or indeed 'Independence Day'-gerbombs'. I really hope they can persuade the council to let them keep the late license - I will be really sad if that's my one and only experience of late-night Dolphin. #savethedolphin
Posted by Ginglesnuff at 8:15 PM