Last night was, considering I don't live too far away from the area, my first belated visit to one of the Vietnamese places on Kingsland road, of which there is a glut.

Mien Tay falls under the category 'cheap and cheerful'. The place is a bit of a cross between a cafe and a restaurant - you don't want to look too closely where the floor meets the walls and the whole thing could do with a lick of paint. But I don't really care about that kind of stuff as long as the food is good.

And it was. I wouldn't call myself a Vietnamese expert but I have had pho and bun hue a few times as well as my beloved banh mi sandwiches so I'm familiar with the flavourings. Nuoc cham, red chillies, lemongrass, ginger, and lots of coriander - what's not to like?

As much as I love Pho, and was starving, the warm weather put me off having a bowl of steaming hot soup. Instead, I ordered a dish that Stephen often gets from the chain Pho but which I hadn't got around to trying yet - bun salad. Cold vermicelli rice noodles, with bean sprouts, carrot, cucumber and in my case chicken cooked with honey and spices. I normally like to get something a bit fiery but they had plenty of sriracha on hand to spice it up, and I was also able to take a couple of chillies from my friends' pho garnishes. 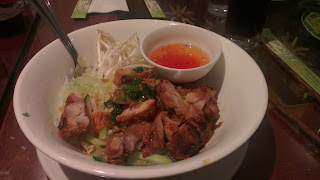 There was plenty of chicken and even as I raced through my dish, assuring myself that I was only finishing earlier than everyone else because my portion was a little smaller, I realised I was getting very full. I didn't need to finish the whole thing in order to feel satisfied, but it was so nice I just had to.
Everyone seemed to really like it, from the Vietnamese 'virgins' in the group to my friend who is most discerning in her approval of food places. She had got a beef style tofu dish which looked amazing, and some spring rolls, one of which she was generous enough to let me have. They were really different to what I'd had before - instead of rolled dough with the filling inside, these were 'spun', light casings. They were deep fried and tasted very bad for you. I'd definitely get them again! 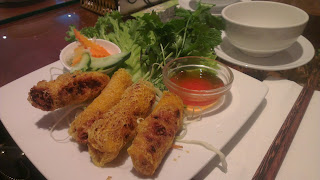 I didn't try any other dishes but the plate full of accoutrements to put in your pho (mint, coriander, chillies, bean sprouts) was well heaped, and it all looked excellent - lots of herbs floating around in the soup, a large amount of noodles, plump-looking prawns. 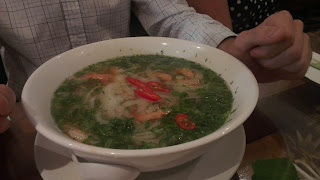 They were really quick at getting us our food (we'd told them we were in a bit of a hurry) and the prices were fab - my bun salad was £6.80 only. A really good start to what I hope is just my first visit to that area for Vietnamese food.

Posted by Ginglesnuff at 3:29 PM