Who would have thought that underneath innocuous Bar Kick in Shoreditch you could find such a haven of sexual liberation. This, however, sounds a lot more exciting than it was. 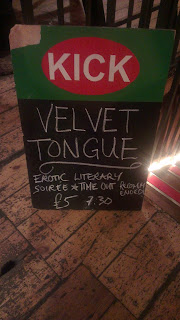 We apparently missed the first act of the night - a reverse striptease, or 'dresstease' where a man started off naked and gradually clothed himself until he looked like a woman. This also sounded like it was the best act of the night. 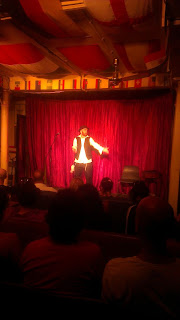 I quite liked the next two acts, one being just a silly performance of a song involving whoopee cushions and the other providing probably the highlight of the night. Lazlo Pearlman, a stocky, wisecracking Jewish guy came out into the audience, Jew-seeking, in order to distribute doughnuts. He then stripped off a little and started telling us about his sexually liberated mother and upbringing and his encounters with Jews - especially some ultra-orthodox Jews who invited hiim to lay tefillin, which he had never done before. He had stage presence, and was amusing, he was entertaining to listen to. And then, the music went on and he started dancing and then he provided us with the shocker - he wasn't a he! Stripped right down, beneath his burly, hairy, rather attractive chest, he had no, as Nursey from Blackadder might say 'winky'. He then explained, as you can imagine, what a dilemma he had with these Orthodox Jews who wanted him to do rites that only a man in Judaism has any 'right' to be doing. And then, we danced! He grabbed some of the audience and made them follow him around the room. I found myself caught up in his wake, him holding one hand, me holding someone stranger's as we Jewish danced around the room. It ended the first half on a strong point.

Sadly, it was barely worth coming back from the second half as each dire, boring, amateur graced the stage to be replaced by yet another. I derived some small enjoyment from realising I was at what could be the epitome of an 'underground' event - people were dressed (or not) however they pleased, taking advantage of a welcoming, safe place to be themselves - but sadly I might as well have been listening to some self-indulgent jazz or poetry for all the entertainment and eroticism it provided.

Of course, it wasn't all about being stimulating and there were some touching moments and some that took me out of my comfort zone, and I sort of appreciated that. For example, one guy took to the stage and proclaimed he was a sadist - he enjoyed hurting women during sex. Of course, purely consensually. He recited some poems of his that reflected his tastes in sadism - punching, knife play. As a girl whose limits are some spanking and a bit of light electric shocks (see Antichrist) it made for some difficult listening, despite his reminders that for all the violence, an orgasm was at the end for both of them. But his was probably some of the better, more well written material that night and it was compelling to listen to the brutality, and a window into a world I'm not familiar with.

There was also the person who took to the stage as a 'fairy godmother' and recited a rhyming poem which was quite an amusing ditty in some ways, but also quite a sad tale of acceptance, culminating in her derobing and revealing her transsexuality. 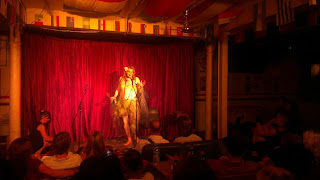 And I have to give a quick mention to the German who recited a poem on making a chocolate carrot cake - something about combating racism in cookery. I noticed he seemed to have some shrubbery coming out of his shorts. This, it turned out, was the leaves from the carrot he had stuck up his bottom, which he dramatically pulled out and used to stir his wine with. He was quite a character! 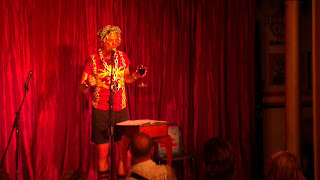 But mostly it was kind of boring, and I mainly stayed because as more and more people left, I didn't want to be impolite! We were finally (sort of) rewarded because the final act of the night was not bad, not bad at all. A girl in an open marriage told us a vignette about a recent lesbian encounter she'd had (these were not rarities for her) and did so in a funny, dry, honest way that was both amusing and quite a turn on. I don't know if it was quite worth the wait, but had the whole night been like that I would have been more than happy.

Sadly, with open mic nights you can never really guarantee quality, and I wish they had just tried to restrain the quantity as well a little, so that even if you did have to endure some bad acts, they were at least short. Some of them seemed to drag on interminably. A time limit would have been very welcome. Ernesto himself was quite funny, having more changes of costume than an Academy Awards hostess in the night, progressively getting more naked with each outfit. My favourite was when he came out in nothing but an inflatable rubber ring.

I appreciate what they're doing in terms of welcoming anyone and everyone to explore and be open about their sexuality, but I don't think I'll be returning.

Posted by Ginglesnuff at 9:47 AM