After having been too late off the mark to get tickets to any of the Zoo Lates last year I was happy to be a bit more on the ball and get some this time around. And at half price too, which is a bargain considering they charge the same amount for a day trip, but which I feel is actually a reasonable amount. £25 seems a bit steep day or night.

Anyway, the Zoo is open after hours from 6 pm until 10 pm which seems like a lot of time but in reality absolutely flies by. Especially when most of the animals 'go to bed' between 8 and 9 (since when did lions prefer to sleep at night?), meaning that after nine there's not much to do but eat and drink, or perhaps attend the silent disco. (You're lucky if you do this because as there's nothing else to do by this hour, everyone else has gotten there before you and there's a queue to get in.) And it didn't help that there was a large group of us and everyone kept wandering off; we probably squandered a good half an hour trying to reconvene. 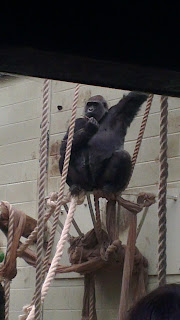 We thought we had a pretty good plan as one of our group had been before - see the animals we wanted to see most, first, then maybe some food, and then see the others. We sort of didn't realise there was even any timed feedings and stuff going on, so missed most of those. But we did see the gorillas before they 'went to bed' and then the tigers in their new enclosure. A lot of us saw the Komodo Dragon chomping on the remains of its dinner - a chicken. I managed to miss this delightfully gory sight, sadly. And we saw a few monkeys. Then we decided that we should really get a drink, otherwise we wouldn't feel like we were at an adults-only event, and I was starving and wanted to get some food.

So we went over to the International Street Food area, where I was pleasantly surprised that they had some pretty decent street traders - Fleisch Mob were there, and El Panzon to name a couple. Sadly, the queues were absolutely massive, which put most of us off getting anything. Not me though. I had hangover munchies and it was imperative I get some food. Which lead me to choosing where to eat based on who had the shortest queue, which is pretty much a recipe for disappointment. There's a reason for short queues. I opted for a pulled pork bun, which as I got closer to the front, I realised didn't even look very good in the pictures, and was worse in real life - a dry, floury bun, quite ungenerous portion of dry pulled pork, which was still dry even though I put copious amounts of 'American Hot Chillie' sauce on it, which may as well have been ketchup for all its spiciness. Sad times.

We sat down to watch the cabaret act while I ate. I use the term cabaret loosely here, as the acts were pretty dire. We moved on as soon as the last bite was finished and that is when I think I had my most heartbreaking moment of the night. There were no queues! No queues for ANY of the food! Had I just waited ten more minutes, I could have chosen anything, anything I wanted at all!

I somehow coped with my disappointment and we went in search of more animals, managing to see the lions - one was being a little bit perky - and do the monkey walk-through before that was shut off. We also saw what was the coolest animal of the night - a giant anteater stalking around in its pen. It had these fabulous markings, and a fabulous tail, never mind its trunklike nose, that we were all enthralled by. 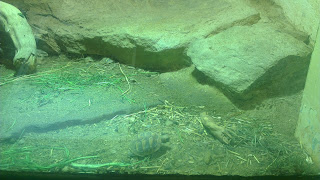 Then the world and his wife went to the reptile house which was the last animal enclosure to shut at 9:30. Baby tortoises were a highlight in there. So cute! Also enjoyed the weird places frogs are happy to loiter if it's damp. 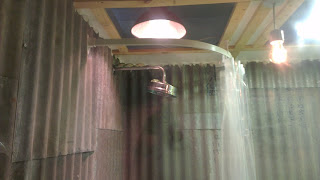 I feel like I've moaned a lot in this post so you'll probably be surprised that I actually had a pretty fun night. Going to the zoo at night is pure novelty, as you see all the same animals you do in the day, and they aren't really any more active than normal. I've been to a zoo that opened at night in the States and it was intense. You really felt like the animals had come alive and that you were in their territory, not the other way around. This wasn't like that - it's so light at this time of year it still feels like day. But it was fabulous to be able to walk around without a bunch of kids getting in the way, and you got quite a good view of a lot of the animals. And, well, the novelty factor was high and it seemed to carry its weight in making it a fun night. Would I go again? Maybe not. Would I recommend it to someone who hasn't been to the zoo before and wants to see all the animals? No - there isn't time. But for just a fun night with your friends, or maybe a date with a difference, then sure! Just remember - animals first, then drinks and food and disco!

Posted by Ginglesnuff at 3:01 PM