I was only ever going to order one thing when I went to Tsuru - the kara-age chicken burger. This was inevitable because it was the sole reason I put Tsuru on the List after having read the London Review of Sandwiches post about it.

I recently won a £100 bar tab at the Refinery, which conveniently enough is opposite Tsuru, so I thought I would make my way over there on Saturday and kill two birds with one stone. Bankside isn't exactly a bustling area on the weekend (or perhaps it is underused in general, hence Yelp's recent treasure hunt to promote the area) and many of the little lunch places are shut. Tsuru, however stays open for Saturdays despite clearly not getting much footfall. There were two guys outside when I arrived, no one inside, apart from me, although a couple more people came by for some take out while I was in there. 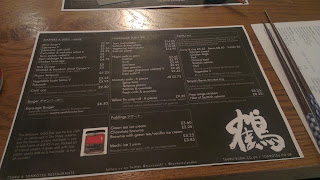 I was given a very friendly greeting and told to sit where I liked. The place is quite sleek and clean looking and you can see through the service counter to the chefs at the back. I was offered some tap water which I accepted as soon as I sat down, and there are wasabi peas to nibble on while you make your selection, or wait for your food. Despite being on my own, I felt pretty comfortable in there. Tsuru is a Japanese place, owned (or at least partnered) by the same people who run Tonkotsu, somewhere I can highly recommend. I was tempted at first to order some sushi as well as my burger but then decided to get a red cabbage and sesame side instead. As I ordered it, I had a feeling my server hadn't heard me properly and when it didn't arrive I realised I'd been right. This was my first meal of the day though, and I realised as I started eating my burger that I didn't really want anything extra anyway. I'd only really ordered it to have something extra to write about. 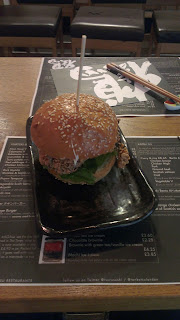 So, the burger. It is described as kara-age chicken on romaine lettuce with a mustard mayo in a sesame seed brioche bun. I must say, that I didn't detect any mustard in the mayo - it just tasted like the kind of mayonnaise you'd get at McDonald's. A little sweet perhaps. The bun wasn't amazing either. It did a good job holding the burger together, was a little too thick and bready, but the sesame seeds were nice. The chicken was definitely the burger's saving grace, made out of thigh meat, with such a load of crispy batter on it that it actually cut my gums a bit! It was very juicy and had a great flavour - I'm sure I caught a taste or perhaps just aroma of lemon somehow. I enjoyed it and would happily eat it again, but I wasn't completely overawed by it. The chicken burger from Rita's doesn't have to worry about being knocked off my top spot any time soon. 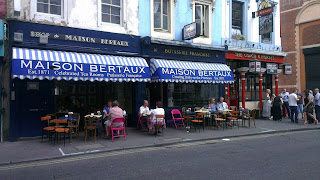 I decided to head into town for some dessert and thought I would give Maison Bertaux a try. I wish I hadn't bothered. Located in Soho, it is one of the city's oldest bakeries and patisseries. It looks charmingly French with its blue and white awnings, and inside – at least in the bit I saw – it is charmingly odd, with a lot of mismatched, eccentric ornaments on display behind the cashier. 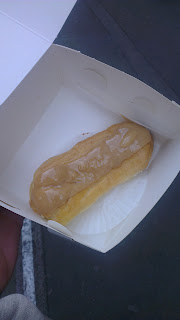 I only wanted something to take away not to eat in, so I had a look at the wares on display. To be honest, I've seen more appealing confections at Patisserie Valerie. I actually had almost made up my mind not to bother getting anything when I was asked what I wanted and of course, was too British to be rude enough to say 'nothing'. I opted for a, perhaps coffee, perhaps maple, eclair. What I'd really wanted was a slice of what might have been cheesecake but the last two were taken by the couple before me. Everything else was covered in fruit and berries which I don't like.

As my eclair was being boxed up I saw a cake on the top shelf where the pastries were which actually looked quite good but by then it was too late. I took my eclair with me and ate it down the road. I have nothing to report really. The pastry was rather dry and not that pleasant to eat. The icing on the top was sweet and it was reasonably well filled. There could have been more cream. I didn't eat it all, which speaks volumes. Very disappointing.