The Well and Bucket, 10th May

I'd been to the Well and Bucket once on a Friday night but I felt like it didn't give an accurate picture of the pub so I decided to go back again before writing about it. So this is a tale of two visits. 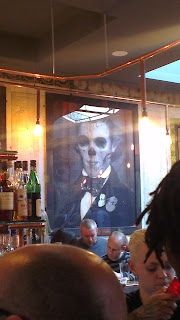 I thought we might have a drink or two at the Crown and Shuttle but in fact, after buying our Field Day tickets from the Owl and the Pussycat (so excited!) we decided to try out the new Well and Bucket at the top of Brick Lane.

This is quite a large pub capitalising on the trend for craft beers. It looks like it would have a large beer garden at the back in which to enjoy them but, in fact, all it basically has is a little patio for people to cram into to smoke.

The inside is impressive though and I think I would like this pub if I went to it on a weekend. On a Friday night it was packed and packed full of the people who work around there who I'm rather pleased aren't so prevalent on the weekends. O! where were the hipsters?

Downstairs was another world (and a world I didn't venture into in the end) which is where the cocktails are served. This was an darker, more intimate and plush area. It looks like it needs exploring further from me. 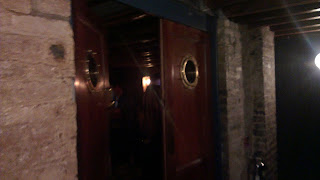 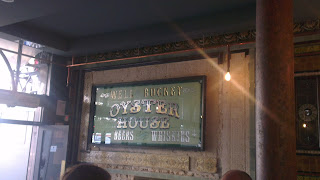 I was rather worried we'd be in for a repeat performance as the sun was blazing and I thought surely there would be loads of people wanting to have a pint in the sun. But it wasn't like that, perhaps because there isn't much of a beer garden to speak of. And I did like it more than the last time we were there. We sat in a corner booth and the place had a much more relaxed, less frenetic atmosphere. It felt more like a proper pub. We marveled at the number of beers on the menu, or should I say the prices. One beer was 20 pounds! But, I should point out that it was a 75 cl bottle and almost as strong in percentage as a normal wine, so through those lenses the prices seemed quite reasonable. 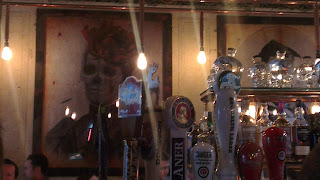 I ordered a house white which was very pleasant - a chenin blanc I believe, it had a little depth and fruitiness to it. And wasn't badly priced at 5.50 for a 175 ml.

We were heading off to Feast (my third time and just as good as the others) so we didn't try anything on the food menu. Just another excuse to go back.

I love the mix of traditional pub and macabre graffiti they have covering the walls, it's all a bit Edgar Allan Poe/Dia de los Muertos, which I get a kick out of.

Posted by Ginglesnuff at 9:53 AM