Classic album Sundays is a bit of an odd one. It's aim is to give you the excuse to excuse yourself from the world for as long as it takes to listen to a full album, all the way through, no interruptions - because how often does anyone do that anymore?

My friend Amy suggested it to me and I thought it sounded relaxing and also might provide me with the impetus to give certain albums the attention I had not yet afforded them. Air's Moon Safari seemed to fit the bill and it was a great fit to the weather outside - a perfect sunny day chillout music. 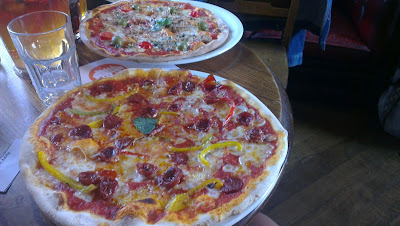 The event starts from 5 pm until the album is put on at 7. During this time they play music that is associated with the album that you're about to listen to. This could be other songs by the band (they played an EP of Air's singles, which included a version of All I Need  slightly different to the finished album version with no vocals) and also songs that they may have sampled (the Beach Boys) or artists that have influenced the band, or artists that were from similar backgrounds (Jean Michelle Jarre and Daft Punk both got an outing). The pub that it takes place in is very nice - quite big downstairs with a decent sized upstairs where the listening area is. They also handily do 2 for 1 pizzas so me and my friend took advantage of this offer. Not the best pizza I've ever had but you can't often go badly wrong with pizza. 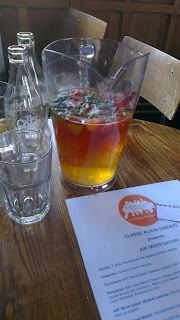 At about ten to the hour, the woman who was running the show stood up and introduced you to the album and also explained some of the tracks you had heard previously. She described her relationship to the album and some of her favourite songs from it. And then, the needle is put on (yes, they play the LP) and the listening begins.

Funnily enough, even though listening does not require you to face a certain direction, and the music system set up was of a very high quality so surround sound was doing its thing, all the chairs were arranged to face the front. There were some comfy looking chesterfield type chairs in the back row (better for the winter as one girl confirmed in the heat they became quite sticky). And then there were some tables and chairs which were great for the eating of pizza and resting of jugs of Pimm's. And then on the floor there were scattered some large cushions. Dotted around were sweets - jelly babies, licorice allsorts, and crisps, if you didn't fancy pizza. As the listening proper began, I regretted my position on the table, handy though it was for eating, and wished we had been on the comfy cushions where people were stretched out in full relax mode. 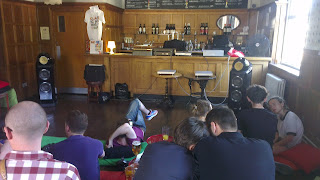 I can't remember the last time I listened to an album all the way through without doing anything else. I listen to music constantly - I have my earphones in while I work, or at the gym, or hanging up laundry. But I only really remember listening to music and not doing much else when I was a teenager, when I would lay on my bed and listen to The Foo Fighters or Blur and contemplate whatever it was I was having angst and feelings of injustice over at the time.

I found myself in a morose mood as I listened to Air as one of my best friend's dad had just passed away that morning. He was a lovely man and I had known him since I was 12, so naturally my mind turned to serious things - thoughts of mortality and what it all means. But I made the effort not to dwell on the dark side of life, as that's not what Air is for. I wanted to be focused on the actual music, especially those songs I hadn't heard before, which is a lot harder than you think. The mind so easily wanders, several times I did the mental equivalent of taking it by the chin and turning it to face the music.

Often I had my eyes closed to fully appreciate the music but I couldn't resist looking around and seeing what everyone else was doing. A lot of people also had their eyes closed, concentrating, absorbing. The odd ones (I mean that in both ways) had their eyes open. Some were tapping their toes or swaying (as I was). Others seemed not to move the entire time! We were encouraged not to keep our phones on and not to talk (whispering in your companion's ear was just about allowed) and most people did neither, although there were still some who couldn't resist the allure of their technology, or who had to comment on an aspect of the track to their friend. 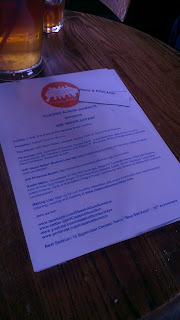 There was a raffle you could enter for a T-shirt just by joining the mailing list, and they also have a sheet of paper pinned up for suggestions for future classic albums. This is how they choose what to play - by attendees' suggestions. On the table there is some further information about the event - including what equipment they are using. I know nothing about it but it looked state of the art to me so I can imagine someone interested in that sort of thing would appreciate the information.

It was an enjoyable way to spend a few hours on a Sunday. It's a perfect hangover activity, and, depending on the album,  and especially if you were laying on the cushions, would make for quite a romantic date.

Posted by Ginglesnuff at 9:34 AM

Email ThisBlogThis!Share to TwitterShare to FacebookShare to Pinterest
Labels: Classic Album Sundays, The Hanbury Arms, things to do