My friends volunteer with running this festival which is the primary reason it has made it onto the List. But also, they promised that this year was much bigger and better (isn't everything) than the time we went a couple of years ago. Oh, and also, I was roped into helping them out with some tweeting during the day, which was fun. Any excuse to tweet. 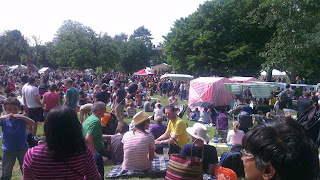 So, after our breakfast of kings at Hawksmoor's Spitalfields bar, we headed down to Crystal Palace to see what the fuss was about. And, hand on heart, I thought it was pretty good! And it wasn't just me - being their social media person for the day, I got to see what people were tweeting about the place and it was nothing but praise. My favourite tweet of the day came from Original Fryup Material - one of the food vendors there - who said the place was "BOOMING", "Not what they expected" and "like a proper festival!". They were right. 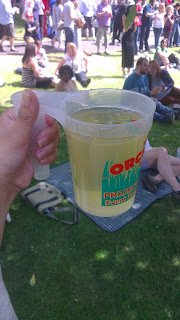 Being as I've mentioned OFM, the food is a good place to start. They've moved up from having some of your usual lacklustre food purveyors to having people like OFM and FleischMob (they get around a bit - they were at Zoo Lates the previous night) - i.e. well established food traders who don't just do the rounds at local fayres. They've also got some excellent choices for tipples. Westow House, one of the local pubs, had a setup there, and there was lots of cider to be found, which is great for a non-beer drinker like me. I tried three different kinds and finished with a perry (my least favourite of them all as it turns out, a bit too oaky). There was also mead for the medieval-minded, though I didn't end up trying that much as I wanted to. And you got these very cool cups (for a £1 deposit).

It's a family friendly affair and the last time I went the music seemed to reflect this, being fairly middle of the road - as Stephen put it, why do all the bands involve 'funk' in some way, which seems to mainly mean they jam on without having any real tune? This year, the organisers upped the ante and perhaps went out on a bit of a limb with the acts that performed as the day progressed. We got there at about 2 and saw Breezy Lee who had a good voice but probably fell more into the category of family friendly. Same for the band following them, who were upbeat and non-polarising. Just good background music to give the place a bit of atmosphere.

The two bands after this though I really liked - they were bands I would actually want to see outside of a day festival and would see again. One was bringing gypsy swing to Crystal Palace, and I would have had my knees up dancing around to them as they finished had I not been wearing impossible heels. And the final act, Metamono, was not at all about being a crowd-pleaser - unless that crowd was into heavy beats with a dubstep twist. After a slightly dubious start with some droning vocals that my friend rightly identified as not sounding out of place in a Mighty Boosh episode, they got going and so did the crowd, with old and young moving their bodies to the basslines. 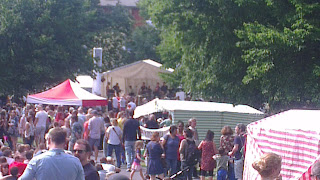 I'm sure the weather helped immensely but I had a really good time down there and I'd happily recommend it to anyone who fancies a bit of the festival vibe. Kids are amply catered for with face painting, reading sessions, performances and a a place for them to let out their vandal side by graffittiing a van, and then you've got good food, good beer/cider and good music for the adults. Oh - and it is completely free! So, many thanks to Nick, Claire and the rest of the Crystal Palace Overground Festival volunteers for putting on such a highly accomplished festival. 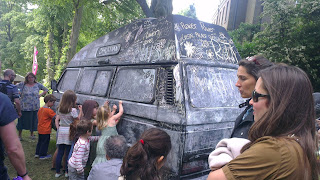 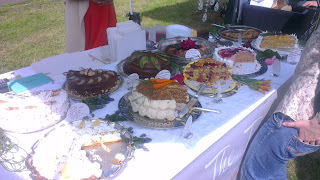 Posted by Ginglesnuff at 1:23 PM