I have a momentous announcement to make... *drum roll*... I can now solve magic eye puzzles! I could move it around and still see the image and everything! *crowd goes wild*. Ok, this may not seem like such a big deal but, apart from now being privy to the wonder that is these images (I was genuinely impressed by the illusion), it also meant I bagged myself tickets to Passing Clouds on Saturday. And that WAS something to get excited about.

Passing Clouds has been on my List for ages and then when I went to STK a while ago, and loved it, I heard that it was in a similar vein and that made me want to go even more. I saw that Gabby Young and Other Animals were playing on Saturday, a band Stephen had already seen before and wanted to see again. So we would have gone that night anyway, but the fact that I managed to win tickets made it seem like it was fated to be.

After a quick drink in the Haggerston (a convenient place to pop in before Passing Clouds given its proximity) we went round the corner and I gave my name to the guy in the booth, who then seemed utterly delighted I had turned up and passed over to me the goody bag I'd also won.

This contained a voucher for two free cocktails and, what some might call, a bunch of tat, but others might call essential accessories for a night of 'raving'. The night I went to was Cloud Factory Adventures and the theme was summer-solstice-festival-technicolour-rave. Dressing up as colourfully as possible, as if you were going to a festival or proper rave was encouraged. I brought glow sticks. They gave me more glow sticks. Glow sticks were in abundance. And a feather boa, and some glasses that turned all the lights into 3D hearts (loved them!) and a flashing key ring - and a trophy! Lots of fun.

The place was similar in feel to STK, but felt a bit more like a proper venue than just a warehouse that happens to host events. The downstairs area was where the main stage and acts were, and then upstairs was a bit of a hippy haven, with colourful decor - scarves and umbrellas hanging all over the place and a cocktail bar, and a smaller stage area that was being used as a dance floor. There was a circle that people were being urged to dance in the middle of and they were playing some RnB. 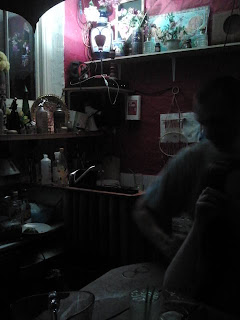 We knew Gabby was on at midnight so at about quarter to we went downstairs where, if I'm not mistaken (and I may well be) they played Duelling Banjos before the band came on. She was supposed to be performing with only three of the normal band but somehow there were still five of them on stage. I thought they were really good - her voice was amazing - I don't know what you'd call their music but it fits somewhere between electro and gypsy swing I'd say, with lots of brass and even some audience participation.

After that music veered into more RnB/dubstep and dancehall. I loved it!

The vibe was what you'd expect from an artsy warehouse kind of space. Friendly, full of love, some crazy outfits, everyone having a good time. Drinks were a pretty standard price and a lot of it (if not everything) was organic. (Maybe that's why I had such a hangover - I'm used to more chemicals!) 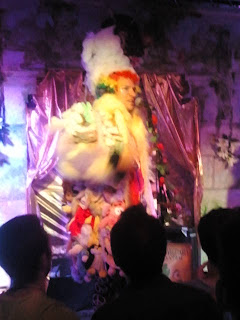 Even my notoriously hard-to-please boyfriend liked the place and has said he'd go back. That makes two of us.

Posted by Ginglesnuff at 2:28 PM