Props to my friend Nick for bringing to my attention another night in London that does bingo with a twist. So far I've been to Rebel Bingo, and Musical Bingo, so naturally I had to try Butchery Bingo as well. It promised music, silly games and alcohol.

Butchery Bingo is a lot more closely related to the kind of bingo your mum or your nan is likely to play. A sheet of six bingo 'books' were handed out to everyone playing and you first had to get a line, then two lines then a full house (full box). You play as a team and it's not immediately obvious how this works in a bingo setting as you're all playing with your own books. However, the team element does come in handy if one of your teammates wins something. Not only does the individual get a [dubious] prize, but the team is then treated to a round of shots, or if you've won the full house, sorry, full box, a bottle of wine! Free alcohol - I like it.

The ultimate prize is a voucher for a £100 bar tab but I'll get to that.

We got there at about 7. It was my first time at the Shoreditch Butchery since it (and XOYO) had been taken over by the people who run the Old Queen's Head in Angel. On Foursquare it's described as a dive bar and it does have a grungy feel to it, but it's furnishings and fittings are far too polished for it to own that description. It's a cool place. A mural of a skull on one wall and a relief of two faces over the bar which is very striking when the mood lighting is on, give the place an edgy feel which foes with the comfy, slightly shabby booths and other seating. 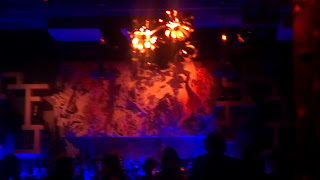 At first we couldn't figure out who might be our host for the evening. Then, when he turned up there would have been no prizes for guessing it was he. Boogaloo Stu turned up with his foot high pink wig, what can only be described as a babygro and heels. Bingo was afoot! 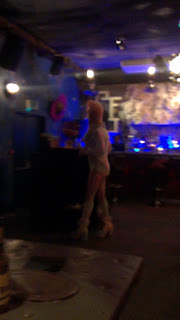 A rather nice touch to lend itself to the kitchiness of the evening was that he had a proper bingo cage that you turn to jumble up the balls with the numbers on. In a way reminiscent of Rebel Bingo, Boogaloo Stu had his own sordid, filthy bingo calls for each number (such as 78, watch my vagina dilate, 78). Well except for the 73 (the bus to Islington, 73) and 47 which he just claimed to despise.

For once, I actually won something! I was the very first winner of the night, getting one line on my bingo card, for which I was treated to a prize of a set of coloured pens. These came in handy when we moved on to the picture round. Waste not want not - at the end of some of the rounds you turn your books over and on the back you have to illustrate one of the numbers. Sexually. The first one was kind of easy - 69 lends itself to depiction of the carnal variety. Later in the night, for 27, a little more imagination was required. Luckily I remembered my newly won pens and was able to do myself justice.

So far so fun, but Butchery Bingo and Boogaloo Stu had another trick up its sleeve. Or should I say bum. For one of the round of games, and then again in the final, was the charming game called 'Penny in the Crack'. You are probably starting to imagine what this entails and you are probably along the right lines. You take a penny, you put it in your bum crack (no! Not under the clothes!) and then you clench it there while you waddle over to a pint glass and drop it in. Poor Stu didn't get many volunteers for this game. Clearly not enough alcohol had been imbibed. But at the end all the people who'd won the full houses through the night had to take part if they wanted to be in with a chance to win the grande prize - the bar tab (to be redeemed at your leisure).

However, as it was a grand final, it wasn't a penny but a pickled onion that you had to secrete and release. One girl totally nailed it.

So yeah, the night was fun but it somehow it didn't manage, despite Stu's best efforts to be Fun with a capital 'F'.  Just before the final round he did manage to pull some people up for an impromptu disco which I think really perked people up. But there could have been a lot more people there which would have helped with the atmosphere. Was it because it was a Monday? Very possibly. Or maybe it's just because no one knows about it. Their website isn't exactly a mine of information and their promotion of it is sporadic on facebook. So I felt a little sad for Butchery Bingo - go one and show it some love people!

Posted by Ginglesnuff at 7:06 PM