Ok, so take your regular common or garden pub quiz with its general knowledge, history, current affairs rounds etc. and throw away all the rounds that you don’t like. You’re probably left with the music round – the one everyone secretly thinks will bring redemption to the team, the one everyone is relying on in order to prove their worth to their teammates. 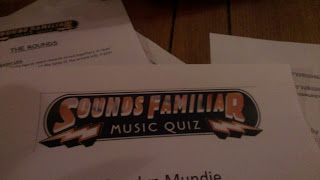 And if you feel that way, then why bother with the other rounds at all? Why not just get yourself to the Sounds Familiar Quiz which have built a pub quiz completely centred on the music round. That’s right, every single round is listening to some music and writing down either the artist, title, or both.

And it really is as good as it sounds.

It is incredibly popular and you really do have to get a bit organised and book in advance if you want to go. As the team names were read out (yes - there’s a prize for the best, no - we didn’t win that), one team had called themselves “Where the fuck is our table?” The reply to that came at the end of the night when anarchy was all but breaking out (people were drunk and impatient to know the winners/no longer cared about the quiz) and the compere couldn’t help but answer that question with “Maybe if you’d booked you’d have had one.” Moral: You need to book.

The place was crammed and even though we HAD booked, there still wasn’t enough room for us at our table and there was a short burst of frenzy as the hosts tried to find a table with space (there wasn’t one) and so had to improvise by playing around with the floor plan. We were happily accommodated after not too long.

On each table is a pack with the Rules, the Rounds and the paper to write on. They also give you an idea of what the rounds in the upcoming Sounds Familiar quizzes will involve, and by looking at them it seemed our evening was a bit of an anomaly. While they normally have rounds such as “Wet Fart” (I dread to think) and “Hard Cheese” or “Got it Covered” this time each round was based on the number of people in the band.

So for Round 2 – “Six me Up” you had to write down the title of the track and the band who did it. You were told in advance it would be a band with 6 members. Round 3 was bands with 5 members and so on and so forth down to Round 7 which was solo artistes. 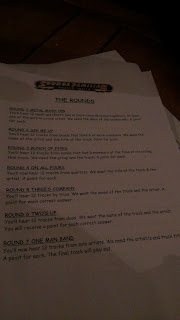 The First  round was full of mashups where you just had to identify the bands. I say “just”. While on the whole the evening wasn’t too challenging and therefore definitely more fun than frustrating, it wasn’t a complete walk in the park either. The second song for instance mashed up Tweet ft Missy Elliot with Queens of the Stone Age. Yes, Tweet. Ring a bell? I doubt it, though you’ll probably recognise the song she did (Oops there’s goes my shirt up over my head, oh my). Of course recognising the song without knowing the artist didn’t help in this case.

And there were also two half-rounds thrown in where MC Quizzical got up and spat some rhymes, describing someone who was of a topical nature. You had to figure out who it was. Pulling some sense out of his fast-flowing rap was tricky but we just about managed to understand enough to make a good enough guess at who he meant. Didgeridoo is a word that stands out in most contexts and can only mean one person given recent events.

The night really reminded me of Musical Bingo in its revelry.  Almost every track they played was a track you wished you could listen to until the end and towards the end, or maybe even the middle of the evening people were up and dancing, some on tables I am sure.


The final song played was All Night Long by Lionel Ritchie (although we’d also had some Abba,  Chemical Brothers and Hung up by Madonna along the way) and the party vibe was complete. I think some people were so caught up with dancing in fact that they forgot to hand in their answers at the end.

We ended up in a mid-league position, but none of us really cared, even though we thought we’d answered a hell of a lot right. We’d had such a good time just listening to the music and challenging our brains to recall songs without the aid of Google or Shazam. Almost all of the songs were familiar and the artists were just on the tip of your tongue. That was the most challenging part as they were quite careful to choose songs that, in the main, were named for their chorus. And they always played the chorus. Or if not, then the song title was mentioned at some point during its play. At first we’d recognise the song and begin wracking our brains to remember what it was called but we soon realised that if we just waited, we’d hear what it was soon enough.

If you need any more convincing about how good it was, they play the theme from Fresh Prince of Bel Air while they tot up the scores. Amazing.

Posted by Ginglesnuff at 1:14 PM