Finally got myself down to the Dead Dolls Club the other weekend, this venue that had reached magical, enormous proportions in my mind. I follow them on twitter, and the tweets about the food provided by The Foragers had filled my brain with images of an outside grotto with gnarly trees and fairy lights hanging from above adjoined to a warehousey/cafe in front where the drinking and perhaps dancing happened.

It was nothing of the sort. I booked a place for us at 8 because it was a Saturday and because it's something of a novelty these days to be able to book. It probably wasn't strictly necessary but it did mean we got a table to ourselves rather than sharing, which is always nice.

The place was almost the opposite of what I envisioned. Completely missable from the front, only the most subtle of signs (and knowing the address) told you you were at your destination. Stepping inside did feel like stepping into a dollhouse writ large - or a stylised version of what a child might think a parlour should look like, with drawings of wallpaper all over the walls making it feel very quaint and picturesque. Other odd touches (see below) made you feel like you had stepped out of reality. Instantly I was charmed.

The menu is a 'grazing' menu, which basically means that it's part of the slightly passe vogue for small plates. Our companions I don't think realised this at first and were astounded at how cheap everything was, because all the plates were about £7.50. That soon adds up when they're recommending two to three plates per person but it does mean you end up getting a better idea of the food overall.

Everything on the menu sounded pretty good to me and we had a hard time choosing. To help things along I inquired about the 'special' cocktail of the day - only £6.50 compared to the normal £9.00. It was something mixing rum and cointreau and after that I kind of stopped listening as I'd heard enough to convince me. I think she might have also said it was 'strong' so I ordered one forthwith. It was very tasty and served in a cute little glass that reminded me of a squat old-style champagne glass. You know, the one modelled on a lady's fair bosom. 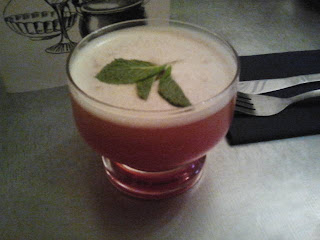 Finally we reached a consensus about what we wanted - we decided to go for two plates each plus two portions of chips to share.

I had the venison and ramson (had no idea what ramson was - still don't - but it sounded interesting) bourguignon and the scallops.

Both Stephen and Kevin had the wood pigeon (Stephen had been set on having wood pigeon in some form - the menu we'd seen beforehand had it as a burger) and Kev also had the venison bourguignon. Stephen had the muttom ham as his second.

Karin, our fish-eating vegetarian friend ordered the salmon ceviche and the mushroom and parmesan arincini.


When the food came out, it met with mixed appreciation. My pan-fried scallops with caramelised onion puree, apple puree, parsnip puree along with some sort of leaf (probably the foraged bit) was probably my favourite scallop dish out of all those I've eaten. Thoroughly enjoyed it. 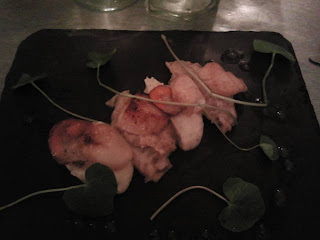 The venison bourguignon was pretty boring though - it could easily have been beef rather than venison and I wished I'd saved some of my puree or had some bread to go with it. On its own it was a bit much. I didn't even bother to take a picture as they hadn't done anything with its presentation. Just imagine a stew you'd made at home and I'm sure you'll have an accurate picture.

Stephen didn't enjoy his wood pigeon very much, which he said was quite overcooked. I had a bite and agreed it was, although I still thought the taste was good and went some way to salvaging it. Kev, on the other hand, to be fair, liked both of his dishes. 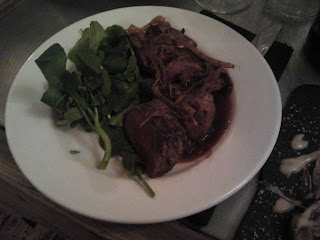 LIke me, Stephen's other dish he liked very much. His mutton ham came with buttered leeks, hazelnuts and hedge garlic. But it was really just a charcuterie plate and not very substantial though as you can see the presentation was quite something and it did taste very good. 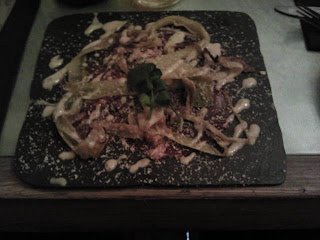 Karin's salmon (marinated in sloe gin and herbs,served with crunchy fennel and a coriander, lemon, orange and stonecrop dressing) was a lovely light dish which she very much enjoyed and the bite that I had was great. She said her arancini were heavy on the cheese (a very good thing) and seemed to like them very much. (I avoided them as they were mushroom-based. Down with mushrooms!) 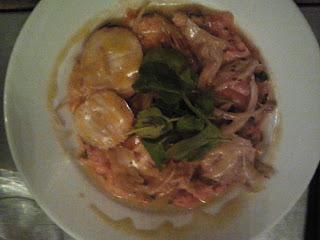 The chips which apparently had chilli and ramson salt on them, were very good chips, nice and thick, cooked properly throughout, although, thinking about it now I don't recall much seasoning on them beyond normal salt. Still, they were good at the time.

I think two dishes plus half a portion of chips was just right, but it probably depends on which you ordered. For me it was fine. If I'd had the scallops with the ham though, I probably would have been hungry.

The desserts on the menu didn't make any of us feel we'd regret not sampling them, and so we ordered a cheese board to share at £10. There was just enough to have a nibble and I, despite not being a blue-cheese eater, quite liked both the blue cheeses but was too shy to ask what they were. Out waitress was also very obliging about giving us some extra bread as a normal portion wasn't really enough for us all. It came with two chutneys - one of which was quite spicy in the non-heat sense of the word, and which I really liked. 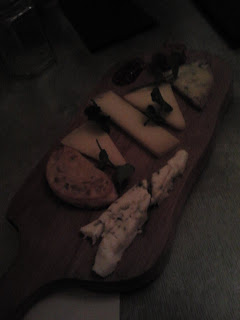 All of that with a bottle of wine between the four of us and some pints came to £28 each which isn't too bad for an evening meal. Would I go back again? Not for a sit-down dinner, no, but I'd happily go along and sit at the bar at the back and order that scallop dish again, or a plate of ham for something to nibble on. The foraging element felt like more of a gimmick than the main event, but to be honest I didn't expect otherwise. This place is also just around the corner from the Haggerston (where we went after) and Passing Clouds so a good place to drop in first as it wasn't that busy and a cocktail for £6.50 is bargain enough to draw me back.

Have also just heard that they've been given a late license so the nights might start getting a little livelier soon!

Posted by Ginglesnuff at 3:25 PM