Yeah, so the weather wasn't great last Sunday but neither was it all that bad so the annual Punch & Judy festival in Covent Garden was a good excuse to get us motivated and out of the house. 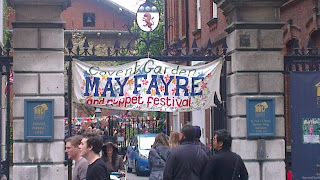 Every year, the 'birthday' of Mr. Punch is celebrated in St Paul's church marking the day when Samuel Pepys first saw Punchinello and brought the concept back to England and it has become a bit of a Punch and Judy convention. This is sort of combined with a may fayre. 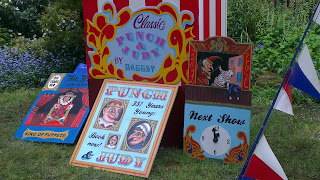 So, lots of different Punch and Judy performers I guess you'd call them, congregate and set up their stages in the gardens and put on performances throughout the day. In the meantime there was a maypole with the little ones dancing around it and there were also some arts and crafts and food stalls. We had a couple of fantastic pastels de nata from a stall there. Mmm, at only £1.50 each we should have bought more! 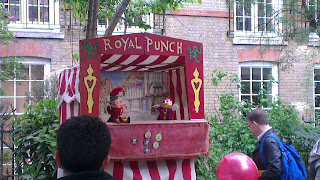 Anyway, we had  wander around and examined all the different Punch and Judy sets. There was one performance happening on each side, and the first one we came to was decidedly more amateur then the one on the other side. 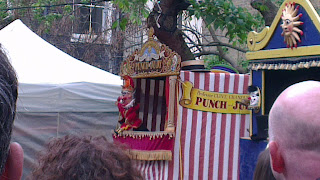 If I'm honest, I've never been a massive Punch & Judy fan, I was just curious to see so many versions around at once. And of course, some Pearly Kings and Queens were there because... well, I don't know, just because I suppose. 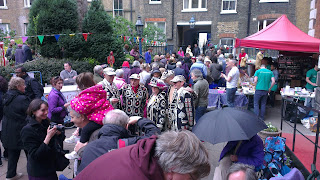 As far as English fetes go, I think this was actually quite a good one. You could take your kids along and probably amuse them for quite some time. A fire eater was just starting to drum up attention as we left. For adults though, a half an hour stroll through it was more than adequate! 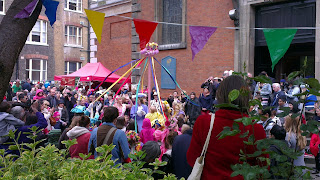