Mexican is one of my favourite types of cuisine - melty cheese, non-melty cheese, salsa and - if you're lucky - guacamole on everything - what's not to love? Burritos have taken off in a big way, and I do love them, but I've always secretly preferred tacos. This probably goes back to my days of eating Taco Bell on the American base and even thought they're the lowest of the low in Mexican cuisine, I loved them. I still love Taco Bell in fact, and I'm not ashamed to say it! I'm no foodie snob - as much as I appreciate cuisine done well, sometimes you really want the junk done badly!

Anyway, luckily for me, it's not all just burrito joints/vans these days - a lot of places are also serving up tacos. I've been enjoying the ones at Wahaca for a couple of years now. Buen Provecho do very good ones, L.A. Sueno weren't bad when I tried them at Feast (and I've heard good things about Mission Mariscos) and now, fairly new to the scene (or new to me at least) are Breddos Tacos, where clearly the tacos come first, even though they also do burritos. 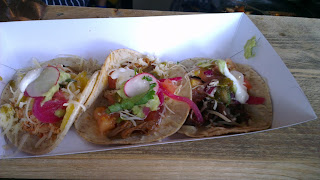 I tried to get there a couple of weeks back but - a rarity for me - not having checked my twitter at all beforehand - I didn't realise that was pretty much the only Saturday in a while they weren't at Netil Market. So back we went two weeks later. They had four different versions - chicken with habanero and mango, pulled pork, chipotle short rib and a veggie one (think it might have been sweet potato, I didn't really pay attention). They're £2.50 each or three for £6.00. So of course we got three each - one each of all the meat ones. Moments before it had been fairly sunny as we chatted at a bus stop with my friend. As we queued for our tacos, the weather turned vicious. Rain is one thing -  what we braved to eat our tacos was full-on hail! So, I probably ate them a little more hastily than I would have had the weather been balmy and I could have sat down to enjoy them. I wish I had been able to savour them longer.

The corn tortilla making up the taco was a really good thickness - pliable but solid enough not to disintegrate from the juicy filling. They were all pretty tasty as far as tacos go and my favourite, surprisingly, was the chicken - it had a good kick but was also nice and fruity.

Breddos also has a large jar of pickled habaneros of which I had a couple on each taco. These chillies are not messing about! They're fantastic pickled but after having had my first two tacos with maybe one or two on each, I realised that if I actually wanted to taste my third one and not just have a mouthful of fire, I'd have to forgo the habaneros.

A wise move as I enjoyed my last few mouthfuls of tender, slow cooked beef with fresh and light salsa. I do love a salsa that isn't afraid to put a bit of radish in it for crunch. Delicious.

Less than a week now until I attend Tweat_Up's Taco Wars and you could say I'm pretty stoked. All the competitors tend to rustle up something special for these events and if Breddos were anything to go by I am in for one hell of a day.
Posted by Ginglesnuff at 4:35 PM