Land of Kings, 5th May

There were definitely a few negative points (more on them later) but I still can't wait to go to Land of Kings next year as I had such a brilliant day.

Land of Kings is a multivenue festival sort of centred around the Arcola Theatre and the buildings near Ashwin street but ranging as far up Kingsland Road as The Marquis of Lansdowne, taking in most venues in between.

Things kicked off at 2pm and the last venue to have something happening finished at 5 am. It was possible to buy earlybird tickets for a pittance of something like £15 but I managed to miss those. Still, at £30 for potentially over 12 hours of entertainment, that's not a bad price.

I got there and the streets were abuzz with the surprise gig Richie Hawtin was doing at Street Feast. I managed to get in for a bit and it was a good way to start the day, it felt like the party was kicking off already. I got myself a wine at a very reasonable £4 and soaked it up. Then my friends started arriving and we went over to the Castle Tent Stage and watched a band called Darkstar followed by a troupe of girls called Gaggle. It was about six by this point so we thought we'd partake of a little Musical Bingo. That was good fun and Ditzy Ritzy was a fun and friendly host. I think it suffered a little from happening a wee bit early on, so audience participation wasn't as great as it would have been had a few more bevvies been consumed (myself I was desperate for the loo for most of it and could only jig minimally along to the tunes in my seat). Much as I would have liked to stay for the next round - 90s - we wanted to explore some more. 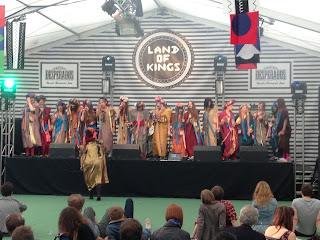 So we went over to Hot Breath's New New Dance Academy, taking place in the bunker. God knows how Mike, the man in charge, managed to stay down there the whole time; I guess you do get inured to things after a while but the 'bunkerness' of it was quite intense. It was dank, it was damp, it smelled of mildew. Probably the perfect setting for the recreation of a 90s underground rave, complete with images being projected on screen - that you could be a part of via a green screen. So we danced around a little like that for a while (see below) but it was good to get out in the fresh air again. 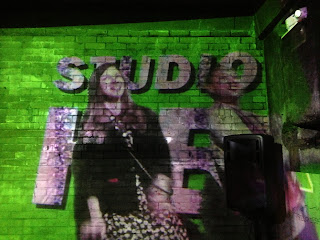 We went back to the Castle Tent and watched Chrome Hoof, a surprise hit who blended heavy rock with dance music. I've never heard anything like it before and I liked it! And then my first highlight of the day - TEED. At first I was disappointed that he was doing a DJ set, not all his own stuff but I needn't have been. It was immense. He was playing house music with some kind of tribal flavour that made every single one of us want to dance like mad people. Which we did. Amazing.

After this we stopped off at the Curve Garden for a little acoustic number before trying our luck with the Roof Park (still too busy) so then we went up to Birthdays. Where I finally got the glass of wine I'd been craving for the last three hours and we watched New Young Pony Club which was another highlight. We wanted to get into as many venues with our wristbands as possible so then we headed over to the Marquis of Lansdowne as our almost final destination. Normally quite an 'old man's pub' they do get a DJ later on in the evenings and it was DJ sets mostly in there at the time.

And then was an aborted attempt to get into the Bugged Out area. If we'd been able to get in then goodness knows how much more excellent my day would have been.

Well Street Feast was a fail in a few ways. I love Street Feast and all their vendors and was really looking forward to filling my boots and maybe getting to try a new trader or two. I was meeting some friends at the festival and had suggested we meet in the Street Feast area. And then they only went and had that 'secret surprise gig' from Richie Hawtin there and all of a sudden Street Feast was THE place to be at the festival. I timed it just right - there was a small queue when I arrived but anyone with a wristband was waved through. Because, you see, Street Feast was the one area of the festival where you didn't need a wristband to get in. Makes sense I suppose for the Street Feast traders to get as much custom as possible. It suddenly makes no sense though, when any Tom, Dick or Harry can get to a cool gig and the people who actually bought tickets, can't. Which is what happened. People who had no idea Land of Kings was even happening were suddenly heading there in their droves. I got in fine, then minutes later when my friend with wristband was in the queue he was being told it made no difference either way and the venue was at capacity. Inside the place felt only half full and I noted lots of people with nary a pink band round their wrists. It was an amazing party atmosphere inside and yeah, Richie Hawtin was amazing. But I couldn't help but notice that there were very few people getting anything to eat. No one really. They say on the site that they 'recommend you come hungry' but if you did (like my friend who arrived about 6), you were shit out of luck. The gig ran for something like three hours with no one being able to get in after about 4:30 and I wonder how happy the Street Feast vendors were about this new arrangement. Ravers aren't exactly known for their appetites.

I also noticed that several of the listed Street Feast traders weren't there which was a bit disappointing. Then, at about 10 pm hunger hit me and we asked a steward if Street Feast was still open. I was fairly sure they were going until midnight but we checked. She said they were there until 2 am. Yet when we got over there we found all but two of the traders had completely shut down or were in the process of shutting down. The bar wasn't even still open! My muffin from Original Fry Up material was delicious and totally hit the spot but still.

Secondly - the bar in the Castle Tent. What was going on with it? A very limited stock made even more so by the fact it kept running out of things. As a non-beer drinker I kept ending up having to get the much-more expensive margaritas rather than a cider, or wine, say, which would have been the same kind of price as a beer as they didn't stock any. And if you did drink beer you could only choose between Tiger or Desperadoes (a very sweet beer with 'tequila' in it). And even when I realised Desperadoes were tolerable, when I went to order another one, they'd run out of those. Earlier they'd run out of Tiger! Me and my friends kept suggesting we go and get a drink we actually liked from the closest other venue, then remembering that they didn't let you take drinks in with you from other venues. I'm sure they did it because they couldn't guarantee it would be alcohol bought at a participating venue, but it was still a huge pain.

Thirdly - it was just so bloody popular! At times it felt like all the venues were oversubscribed with queues to get in or one-in-one-out situations. Couldn't get to the Dalston Roof Park. Couldn't get in to Cafe Oto. Offputting queues elsewhere. Couldn't get in to the Bugged Out area (the one place I had most wanted to go, and the only one still 'open' at the end of the night where, I would have thought, they should have anticipated everyone wanting to go regardless of whether they liked the acts). When we got there it was just no dice for getting in at all. Disappointing.

But yes, not disappointing enough to put me off going again as I had a whale of a time despite all this. And some of these things were inevitable or unavoidable, though not ALL of these things. Maybe it will be a little different next year in which case it could become my top festival to go to.

Posted by Ginglesnuff at 9:24 AM