Franze and Evans, 3rd May

Franze and Evans made it on to my list simply because I'm in the Brick Lane area and whenever I walk past it just seems to embody the kind of place I want to love. It looks cute and homely and people sit outside eating brunches of eggs that look tempting. When my friend and I decided to have dinner and drinks recently, this seemed like the kind of place that would fit the bill.

And it was pretty good. It does have a neighbourhood feel to it, there are several larger tables that you can end up sharing with other people and some smaller ones as well. The black and white tiling on the floor reminds you of a continental cafe. Apparently they do good cakes but we didn't really take a look at these.

It took us a long time to choose what to have as almost all of the dishes on the menu appealed. There's a good number of dishes as options - and it caters very well for vegetarians. It's Italian in cuisine but more about the pasta than lots of grilled meats.

We ordered a fairly basic bruschetta and some squid to start. I really enjoyed the squid - much more than any other squid dish I've tried. It was battered and deep fried with a light touch and was a little chewy but not overly so. This was topped with spring onion and chilli (although it was very light on the chilli). 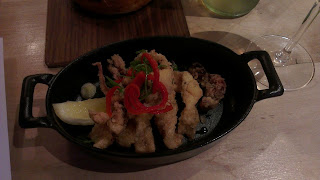 The bruschetta wasn't much to write home about - we'd got the probably least interesting one on the menu so perhaps the fault lay with us. It was a bit like a small overly bready pizza. 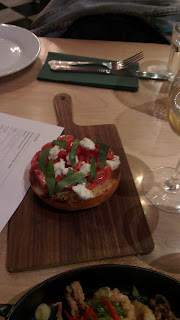 My friend ordered the spaghetti with clams and mussels. While she thought the pasta was delicious and really commended the portion size on the whole, we both rather thought they'd been a bit stingy with the number of molluscs - we counted all of two clams and she had about four mussels. They're hardly the most filling on seafood anyway. I think you should get a little more bivalve bang for your buck. 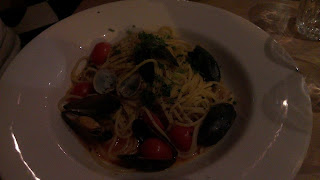 My main was a total showstopper though and worth going back to the restaurant for alone. It was artichoke tortelloni with wild garlic, lemon zest and butter and I do believe I'm salivating as I write. Five well-sized pieces of tortelloni drizzled with lemony butter and well stuffed with the delicous filling. The pasta was cooked so that some of the edges were a little crispy. I could have eaten another portion (although the size was perfectly adequate for a main dish). 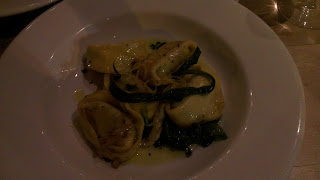 With our meal we ordered a house white which was only £18 and outstanding value for money. A very pleasant wine to accompany our meal (making the wine we supped at Brewdog all the more unpleasant).

This is the sort of place you could easily make your 'local' neighbourhood restaurant - where you pop to when you are taken with the urge to eat out and want something reliably fresh, tasty and that won't break the bank.