I had a rare weekend night where I’d not made plans with my Meetup or with Alison or found myself with other commitments so Stephen and I headed up to Stoke Newington. There were several places I had on my list or had heard were worth a visit, starting with the Jolly Butchers where we also ate.

Outside it proclaimed itself an ale and cider house which sounded good to me as I like to see ciders making a big appearance. They only had three on draft which seems a little meagre for such a declaration. I had a Kingshead to start which I didn’t really like – a bit too musty with a weird aftertaste, but for my second I had the Ginger Cider, which wasn’t merely a silly name but meant that it had ginger in it. This was lovely – like having an alcoholic ginger beer but without all the sugar. 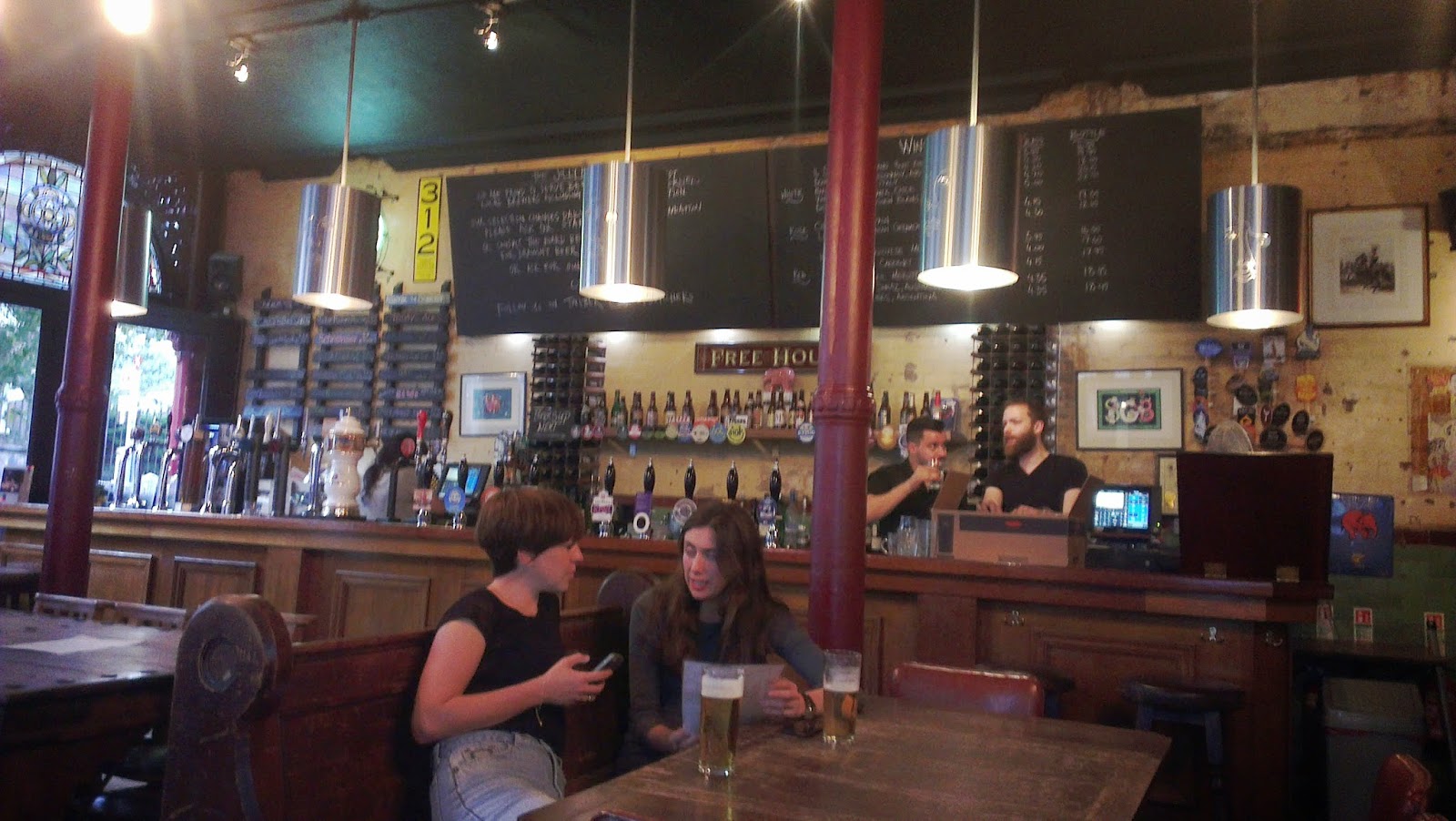 The Jolly Butchers seems to be straddling pub grub and trying to cash in on the Dirty food craze, and judging by what we had, it isn’t doing either one very successfully. I had fish and chips, and Stephen had the pulled pork bun.

My fish had ‘crispy Weiss beer batter’, a batter that was in fact incredibly thick, and soft, not like other lighter, thinner and crispier beer batters I’ve had before and much preferred. The chips, however, are worth the trip alone – they were fantastic specimens of chunky chips. 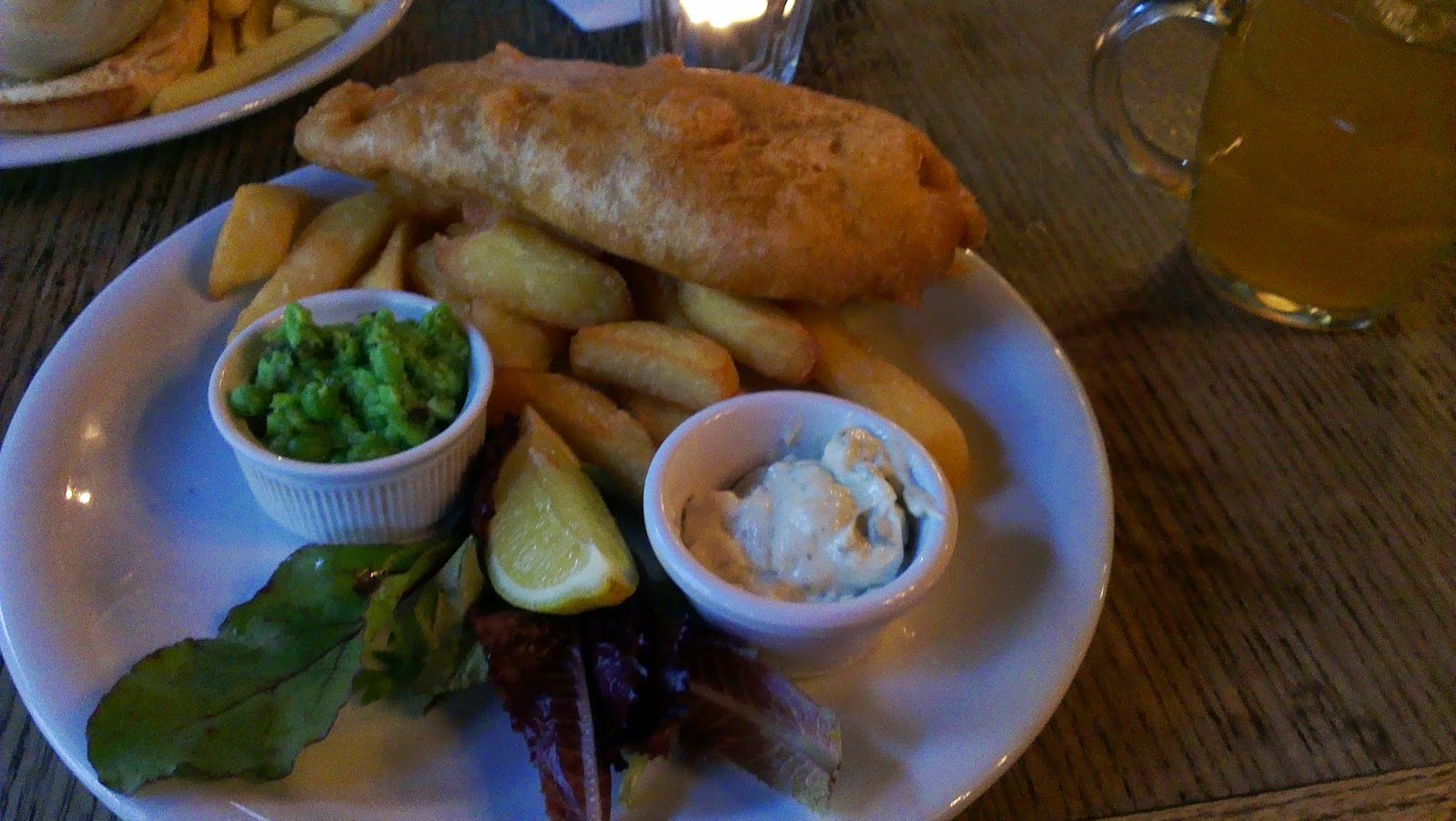 Stephen’s pulled pork burger was firstly, rather small but also, not very nice. It came with a beer mustard, a mustard that Stephen said just didn’t go well with it at all. 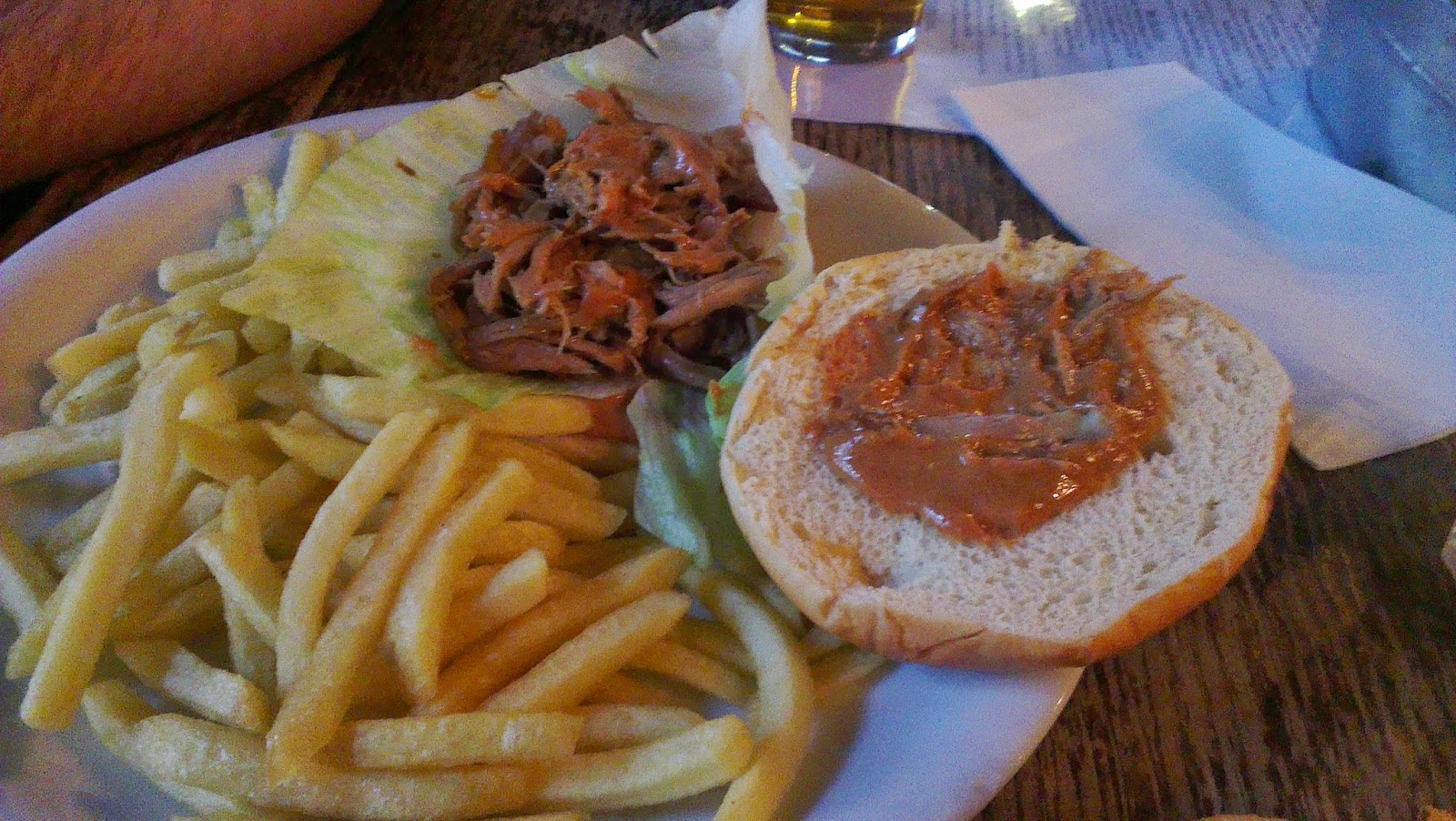 For a pub this place was great and I’d go back but I’d stick to the chunky chips and stay clear of anything else.

On to the next one then, where we realized what an epic food fail we had made. As we sipped our cocktails, the next table over was tucking into some seriously tasty-looking grub similar to what we’d just had – burgers and pulled pork sandwiches. Must come back here to try them. 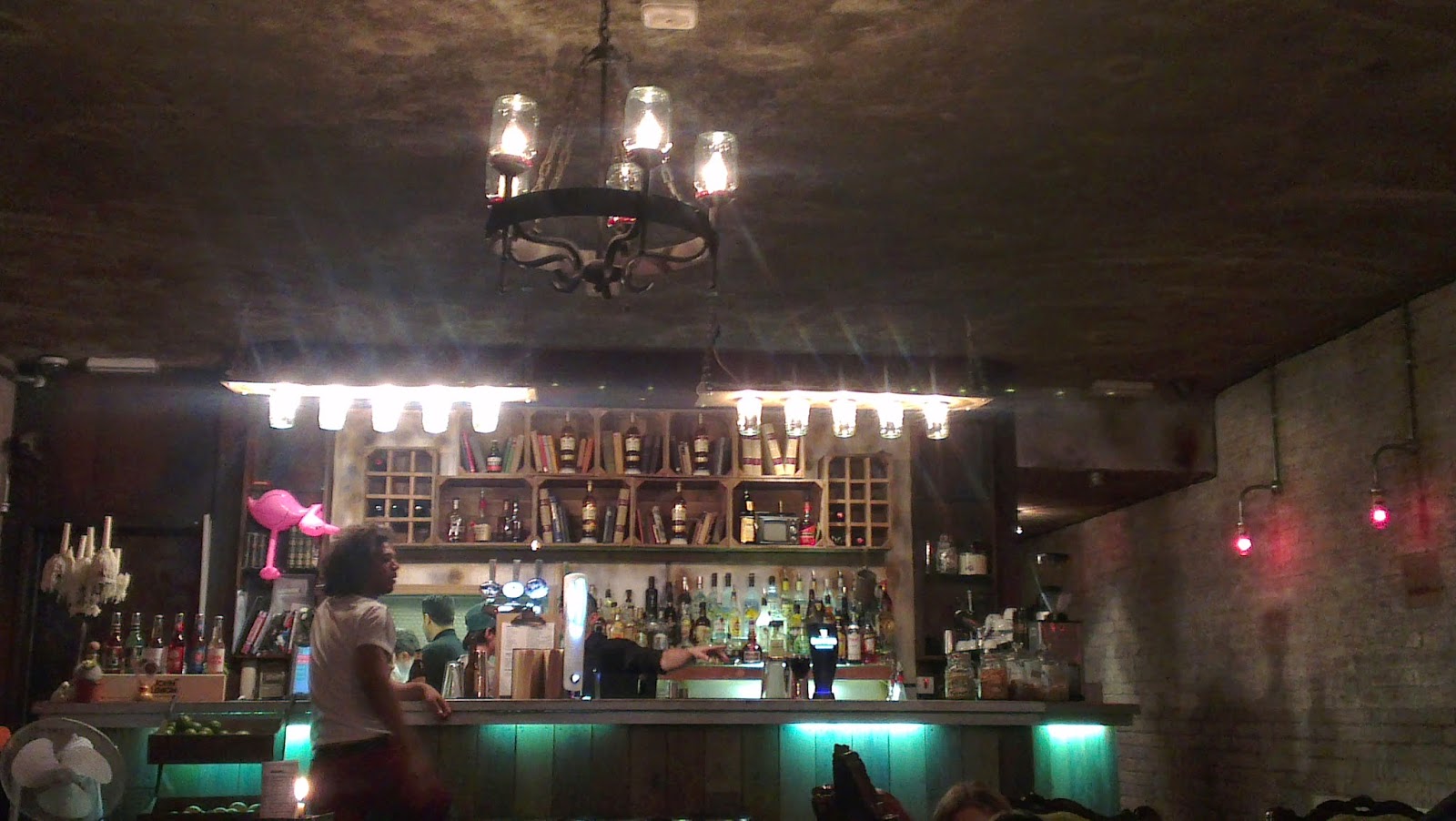 Stokey Stop is a really lovely place actually – it has quite a casual café vibe to it: even at night as it is brightly lit with wooden tables. I thought it deserved to have more people in it than it did. And the cocktails were ace. I swear the espresso martini I had made me actually get a caffeine high, which I have never had before, as well as being seriously boozy. Not only did it have Kahlua but it had a shot of espresso patron! Oomf! 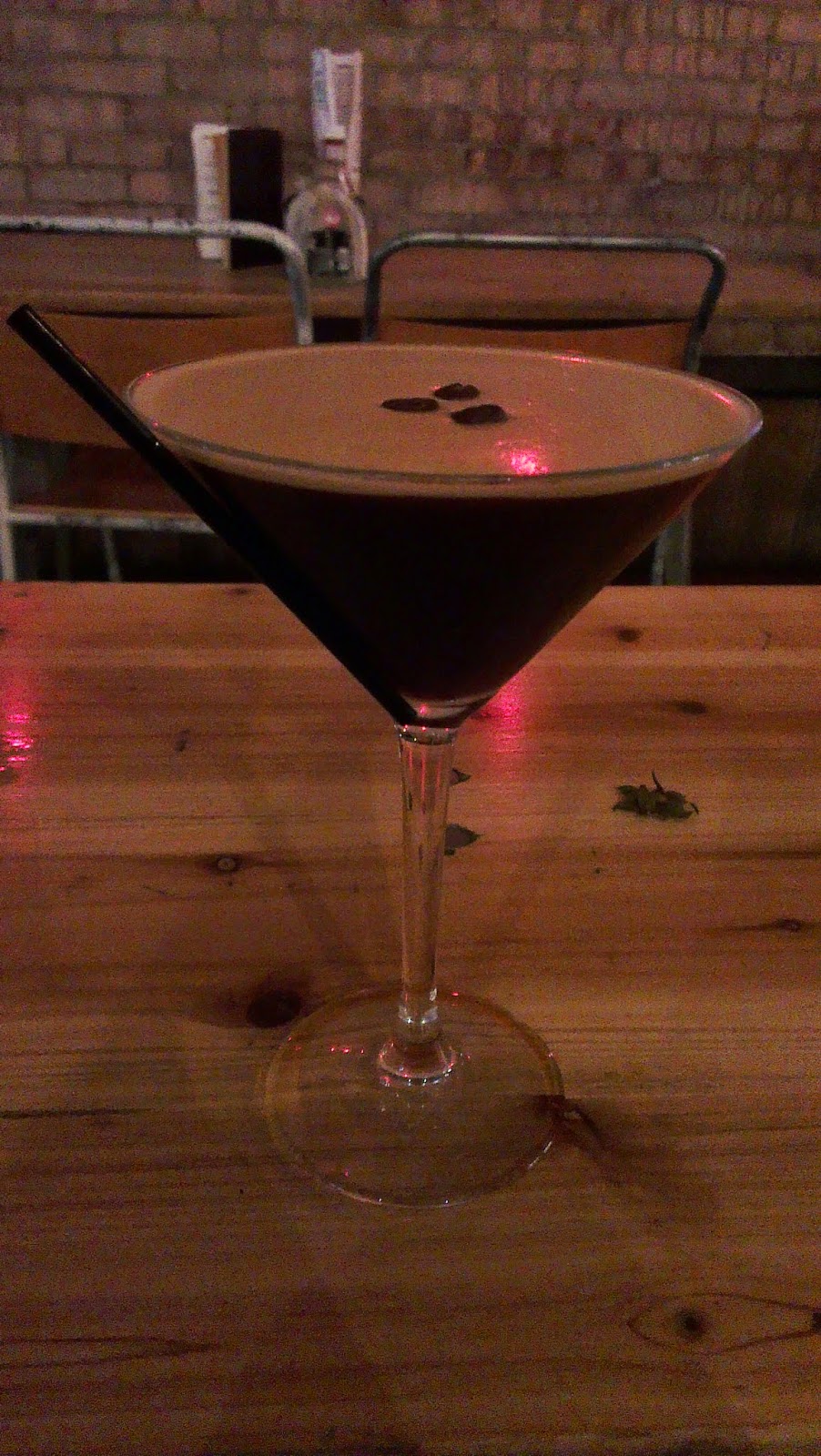 The rest of the cocktail menu focuses on the classics – cosmopolitans, mojitos etc and they’re doing a good job of them. They’re also priced at a very tasty £7.50. The downstairs basement hosts different clubnights, mostly offering electro music, and some with a Sapphic leaning so bear that in mind when you head up there. 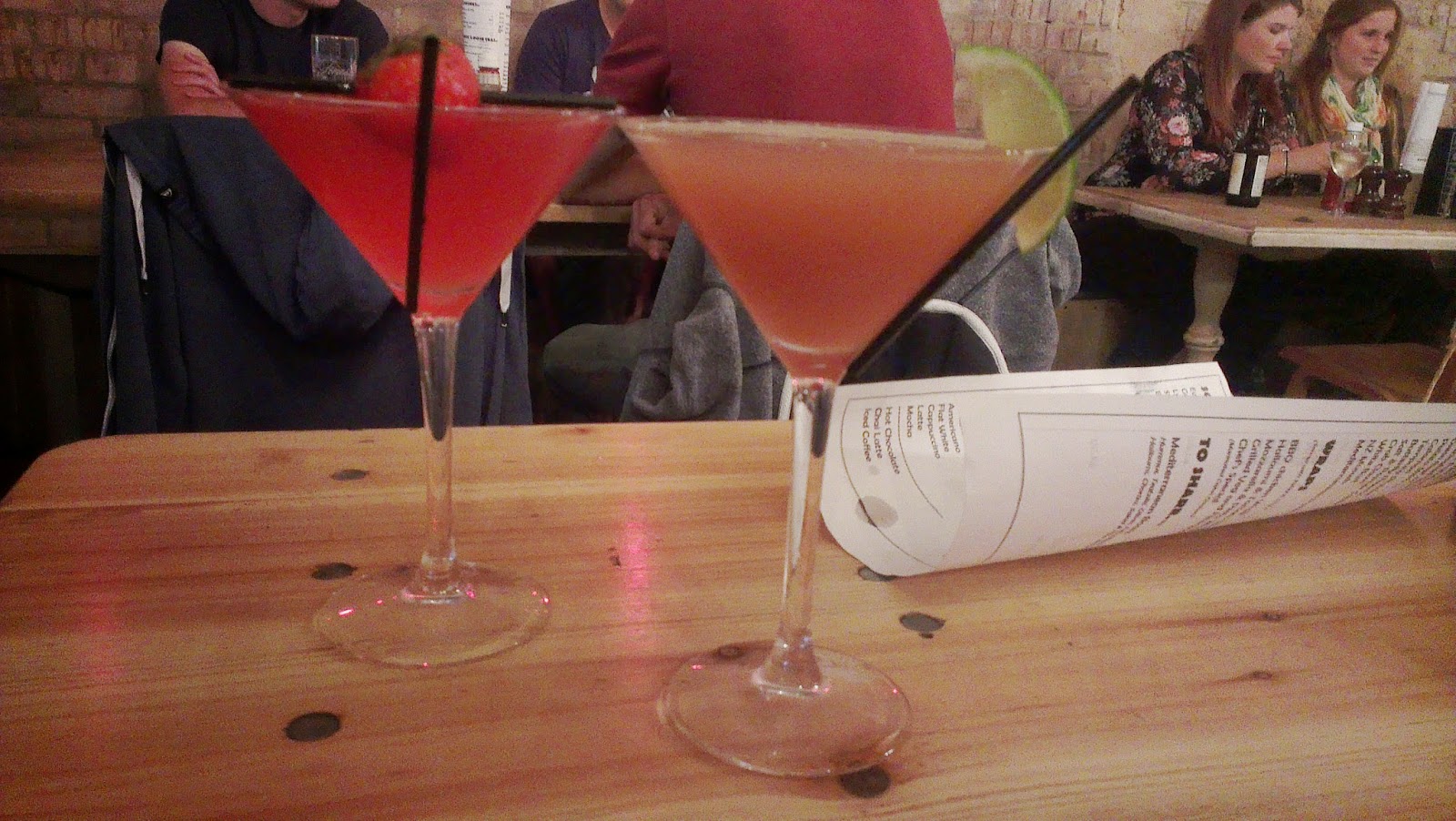 Definitely somewhere I would return.

Next we moved off the High Street and down Kynaston road to the newly reopened The Prince. This is a place that caters for the people of Stoke Newington who can actually afford all those gorgeous townhouses that the side streets are lined with. It’s a pub but firmly the uppermarket end of the spectrum – not somewhere to get too rowdy. It’s also pricey – two drinks were more than a tenner and I only had a small (for me – it was 175ml) wine. Stephen proclaimed it ‘full of people you would find in Clapham’ and judging by some of the chino shorts he was probably right and we probably won’t venture into it again, preferring to slum it a little more, where we belong. 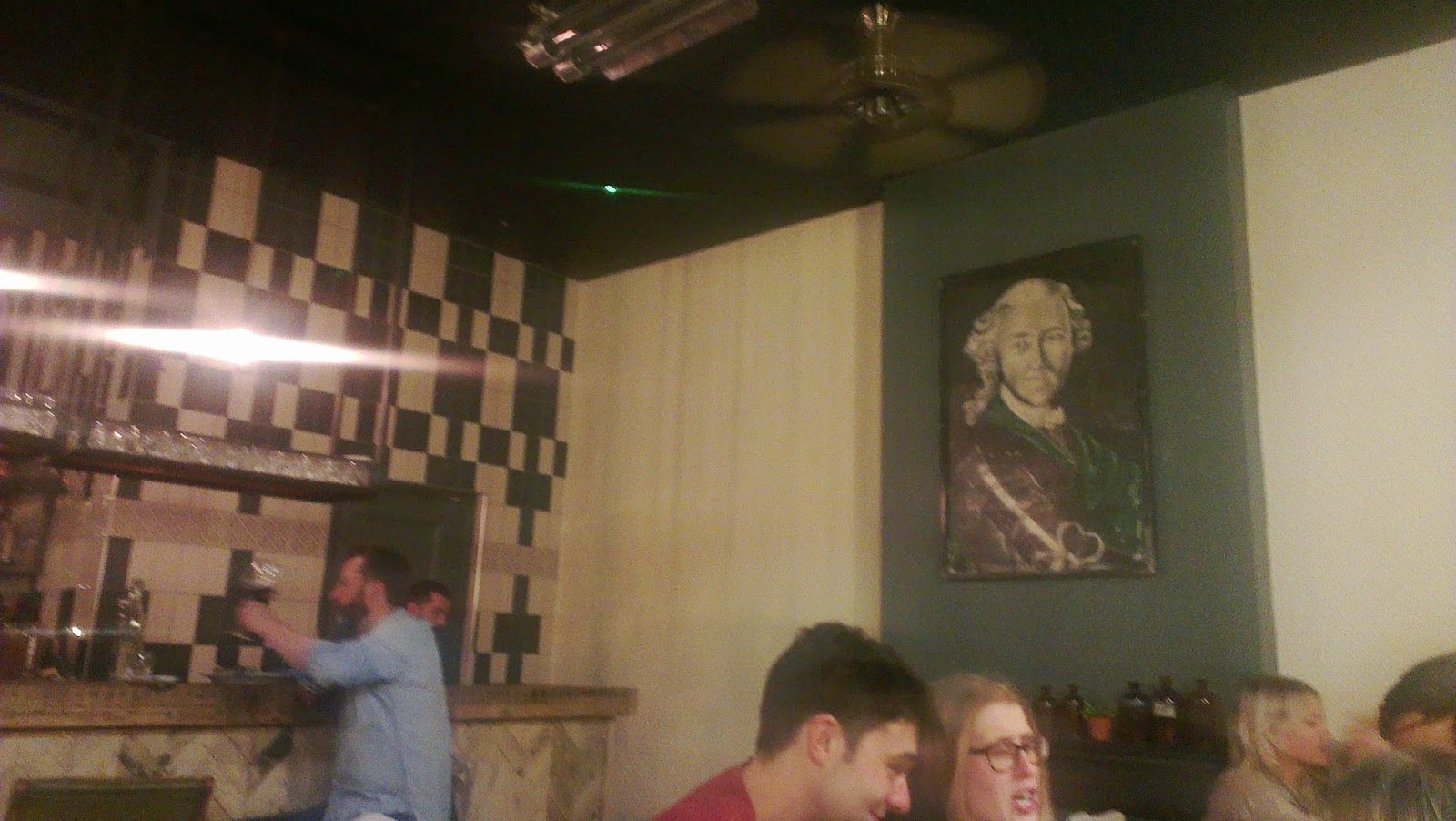 Having said that, our next stop, Etcetera, was a pretty classy joint. But still the kind of place I want to call ‘a joint’. It had low lighting, was playing some smooth jazz in the background. Something about it reminded me of Hopper’s Nighthawks painting. Maybe because there were, again, so few people in here. There was an air of loneliness to the place. It must have been around 11 by this point so there was no excuse for it not to be busy. Perhaps it was just a little too New York for this area of town. 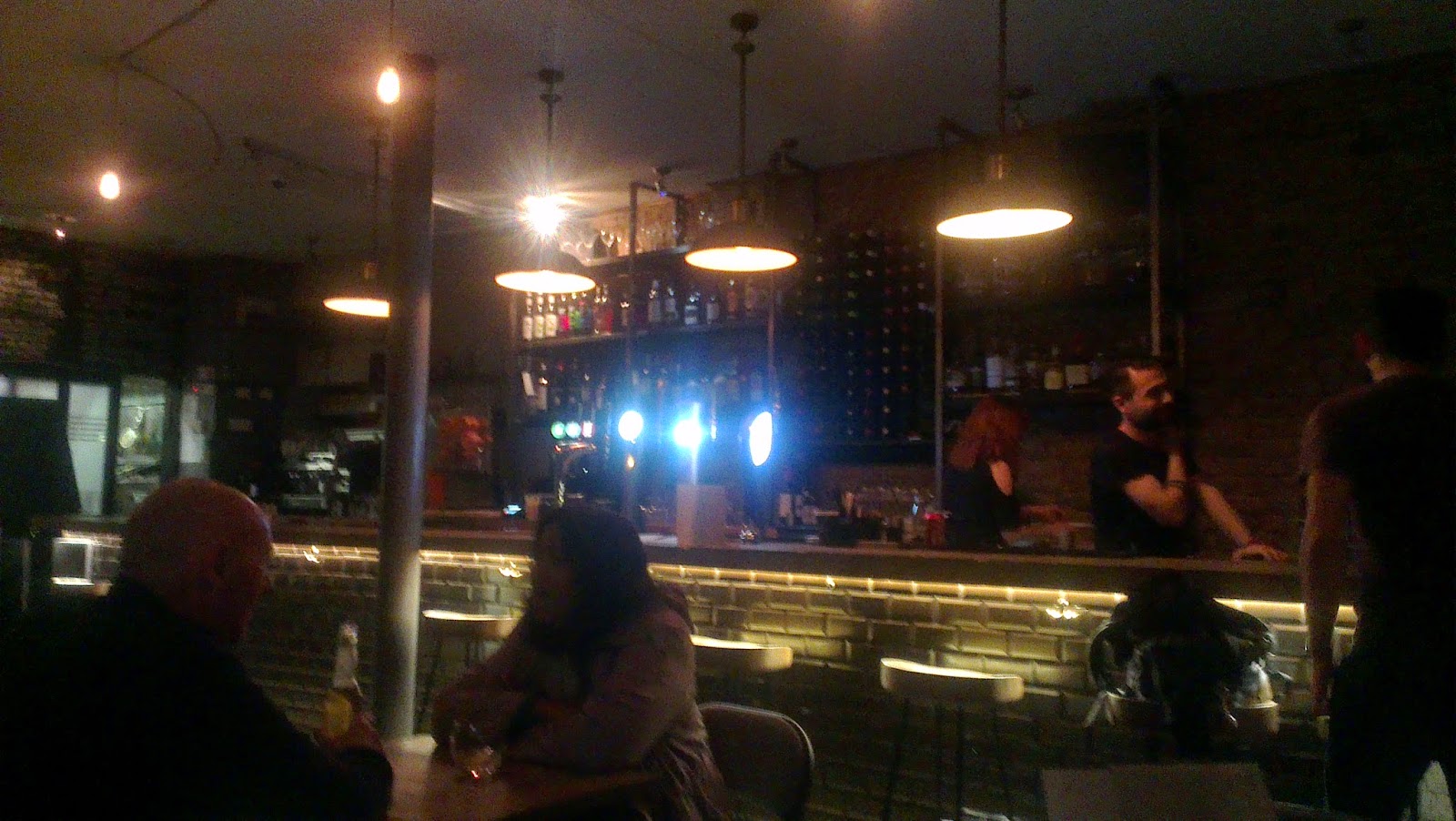 Our final place, the Hunter S, was the sort of place I feel the Dalston/Shoreditch area does so well - a comfy pub with a load of weird shit on the walls (mainly taxidermy, ever popular among the hipster crowd). We got a couple of shabby chairs and had a couple of drinks (beer and wine, this ain’t no cocktail bar) until the place closed and we were guided out its doors. This wasn’t actually in Stoke Newington but down in Beavertown where there is already the likes of The Haggerston and The Fox. An evening spent in all three would be a very pleasant evening indeed. 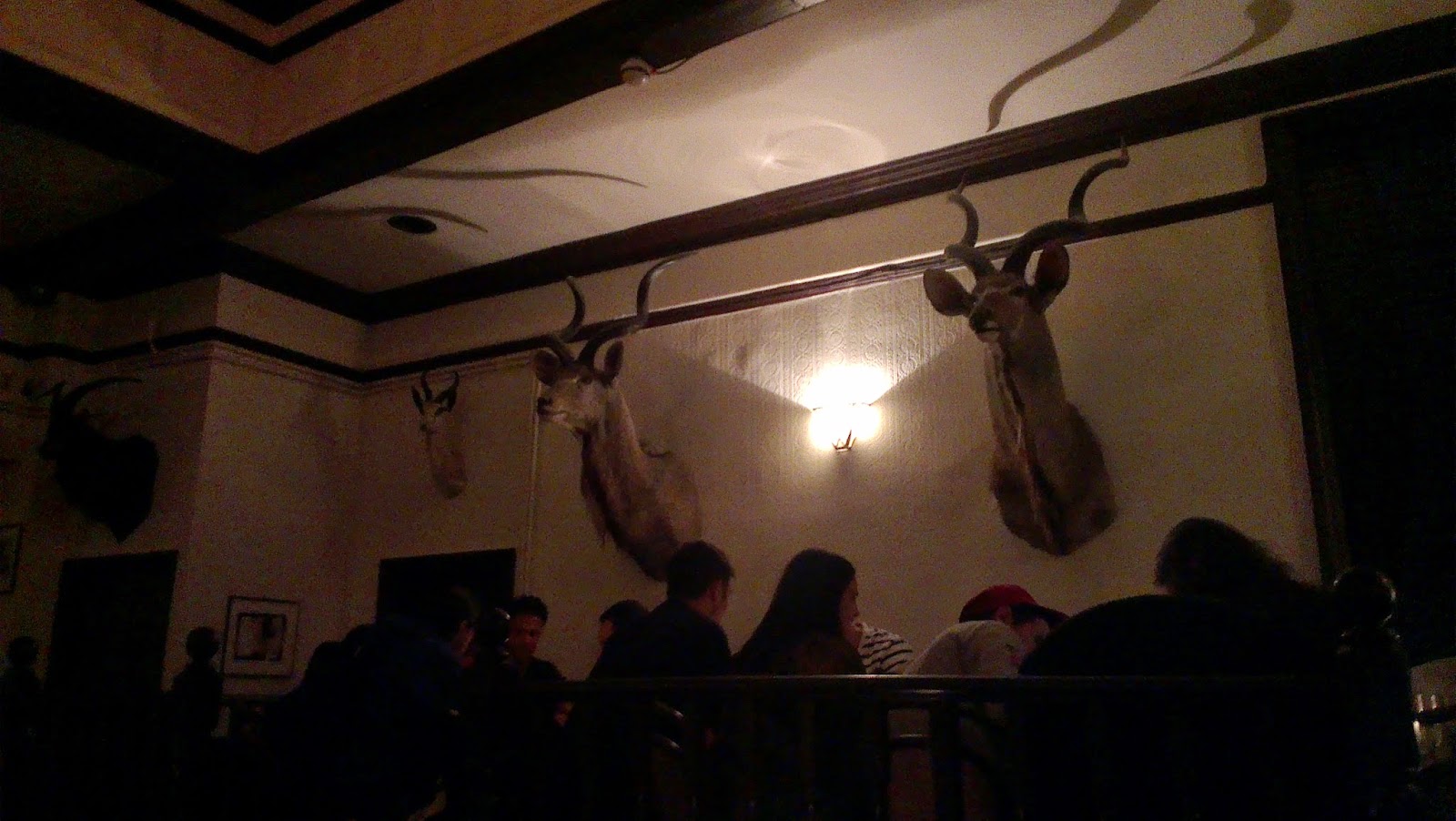 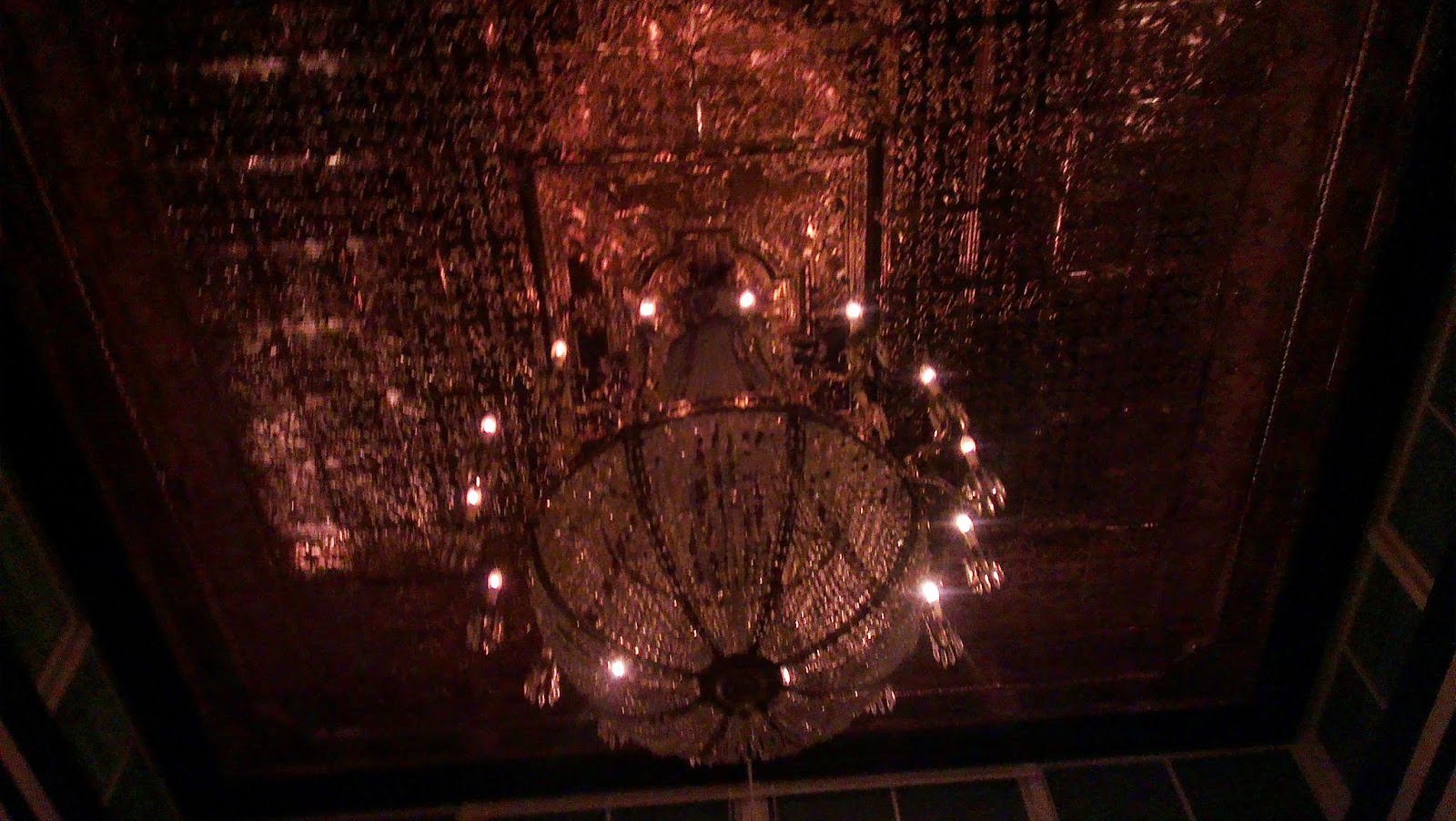 Posted by Ginglesnuff at 5:04 PM