Now that you've finished laughing at its silly name, I shall tell you that this is a rather good little pub, at the top of Mare Street, attracting the overflow of hipsters from Broadway Market. Actually, there was a mixed crowd – sure, there was a lot of the younger generation, but also some older, more traditional pub-going folk – you know, people with dogs and beards before they were cool.

We only had time for one but I'm sure when I'm in the area I'll be back. They serve the usual suspects of Kernel, Camden Hells etc, but they also apparently have an in-house brewery called Howling Hops, which we didn't try. And they served my large wine in a carafe which I always like. 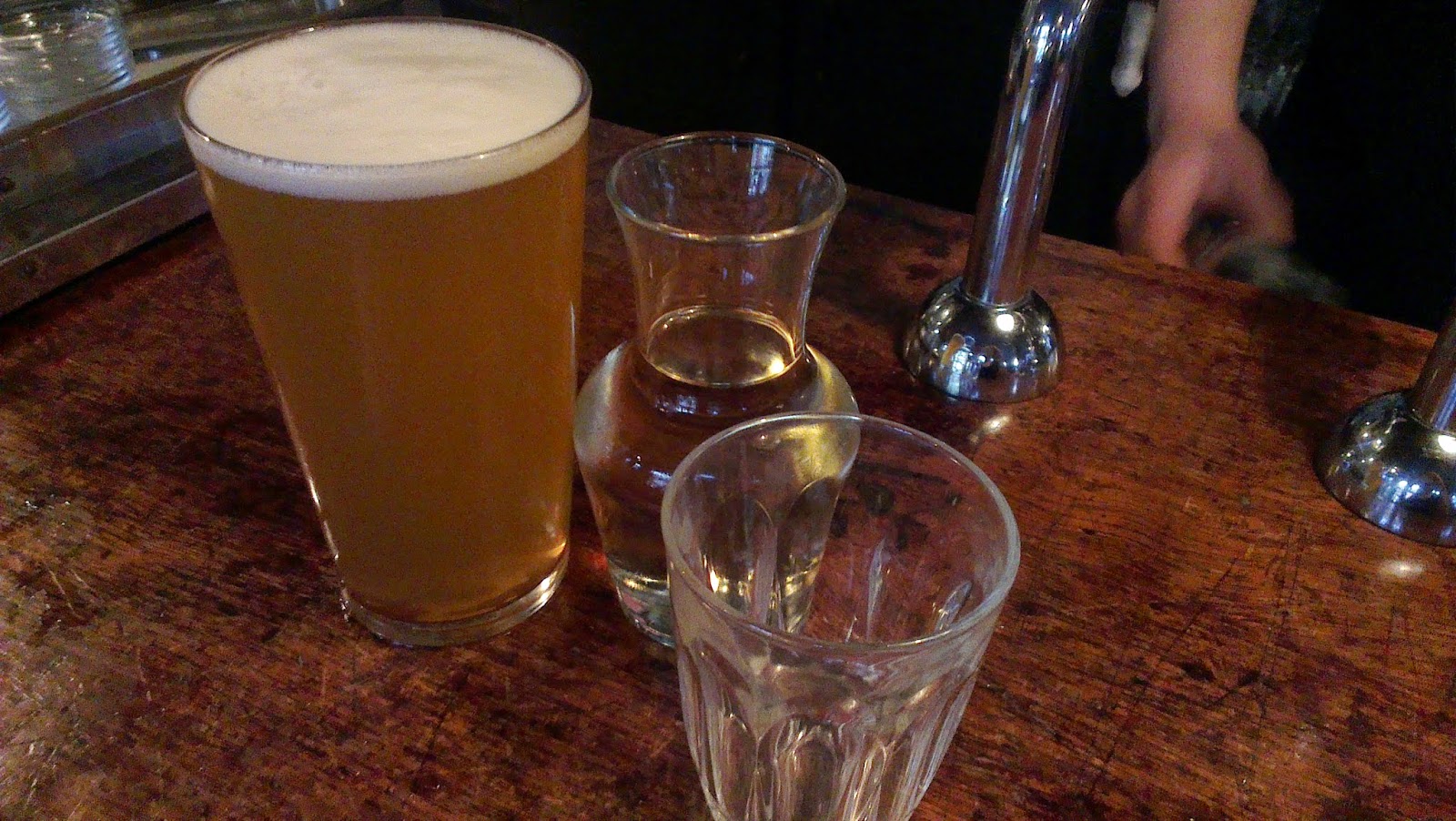 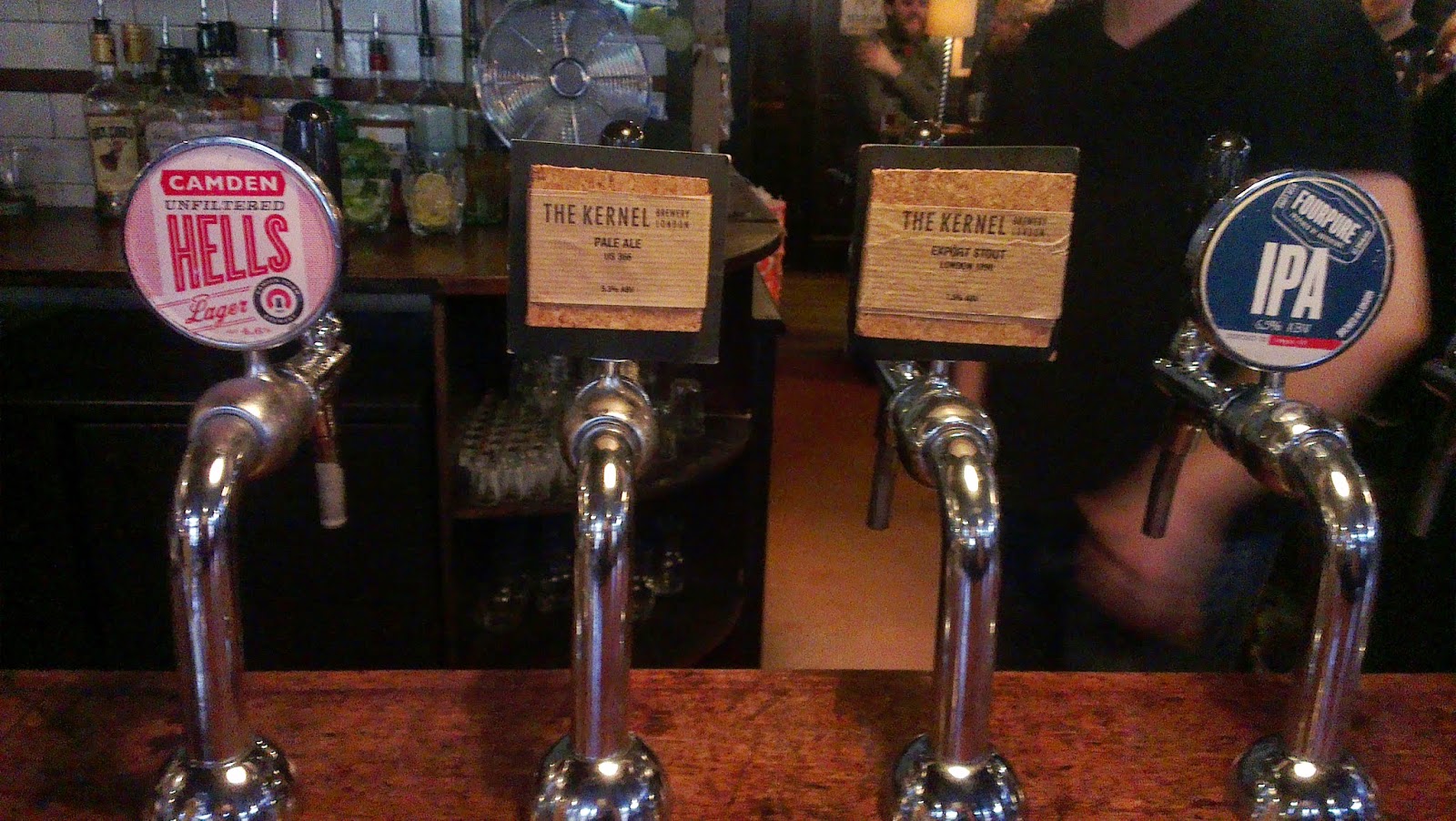 I'd already been to Rita's when it was just a little residency at Birthdays, serving fantastic 'down-home' southern cooking, so I have had their permanent place on my List ever since seeing they had finally got new premises.

The permanent place has given them a chance to flex their muscles and really show us the kind of sophisticated, 'all growed up' cooking they can do.

There was definitely an element of asian fusion in the dishes on the menu, but they haven't completely turned their backs on the southern influences that made them so successful during their pop-up. The green chili mac n cheese is still on the menu, and while the chicken burger wasn't, they have instead a half chicken with warm honey and gravy. As delicious as that sounded, we balked at paying £25 for half a chicken, no matter how good it might be.

We had a couple of cocktails, which were nice enough, though next time I'd probably just go for wine as an accompaniment to my meal, noticing that they sold it in 500ml carafes as well as bottles and by the glass.

I had really wanted to try the goat tacos, another nod to their 'dirtier' roots but by the time we got there (our reservation was for 8:15) they were already sold out!

So, instead we had quite a mature meal that ranged across the different styles on offer. There were several vegetable dishes that we were torn between, which is unusual for us; the asparagus special with duck egg yolk (cooked in a water bath) and miso butter, the tokyo turnips with soy butter, or, the one we did go for - poached calcots with szechuan minced pork. 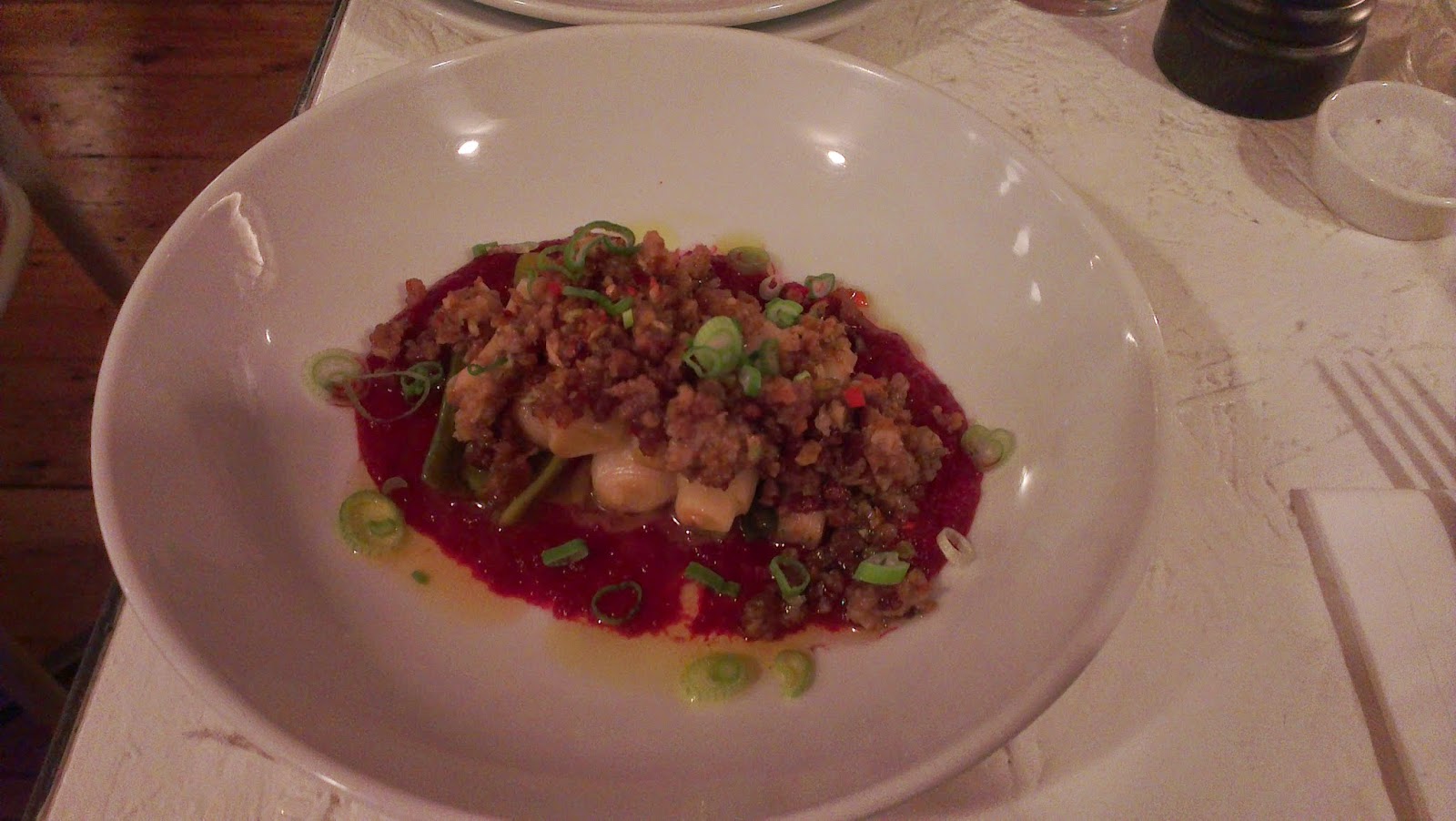 The calcots were like mini leeks and came with dry-fried crumbled pork all over it, sitting on a delicious and subtly fiery red sauce. This was my favourite plate of the night!

Stephen then overcame his aversion to ordering a vegetarian dish to get the mushrooms with burnt onions, a ragout of grains, and parmesan cream. This dish would not have been out of place in a high-end restaurant – a fabulous blend of earthy flavours and rich, creamy cheese. I'm not a mushrom person but this dish came close to winning me over. Stephen was almost stunned by how good it was. 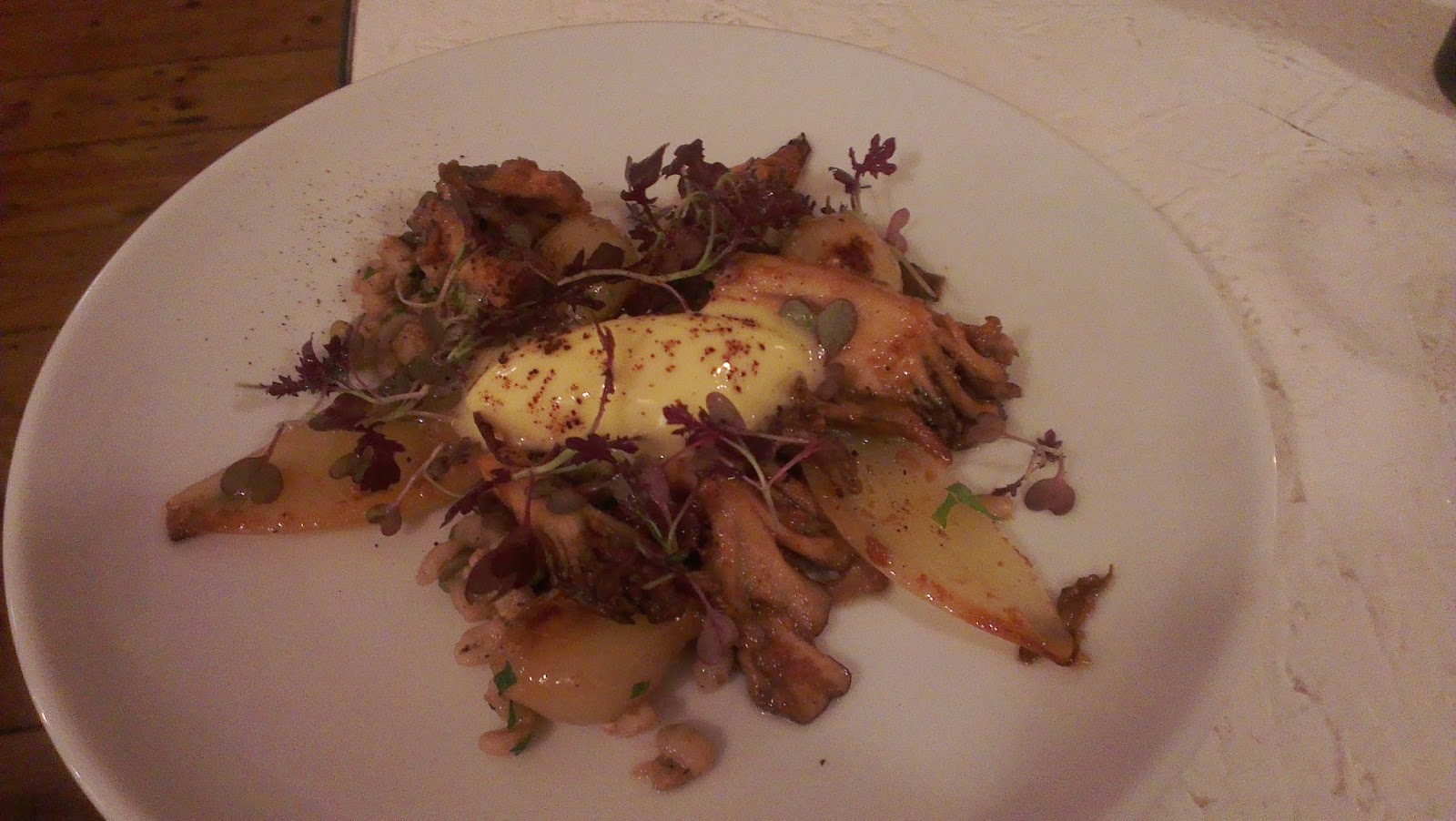 'My' dish was the rare tuna with radish, blood orange and pickled cucumber. It was the polar opposite of the mushroom dish - light and delicate, crisp and fresh. Another exquisite plate. 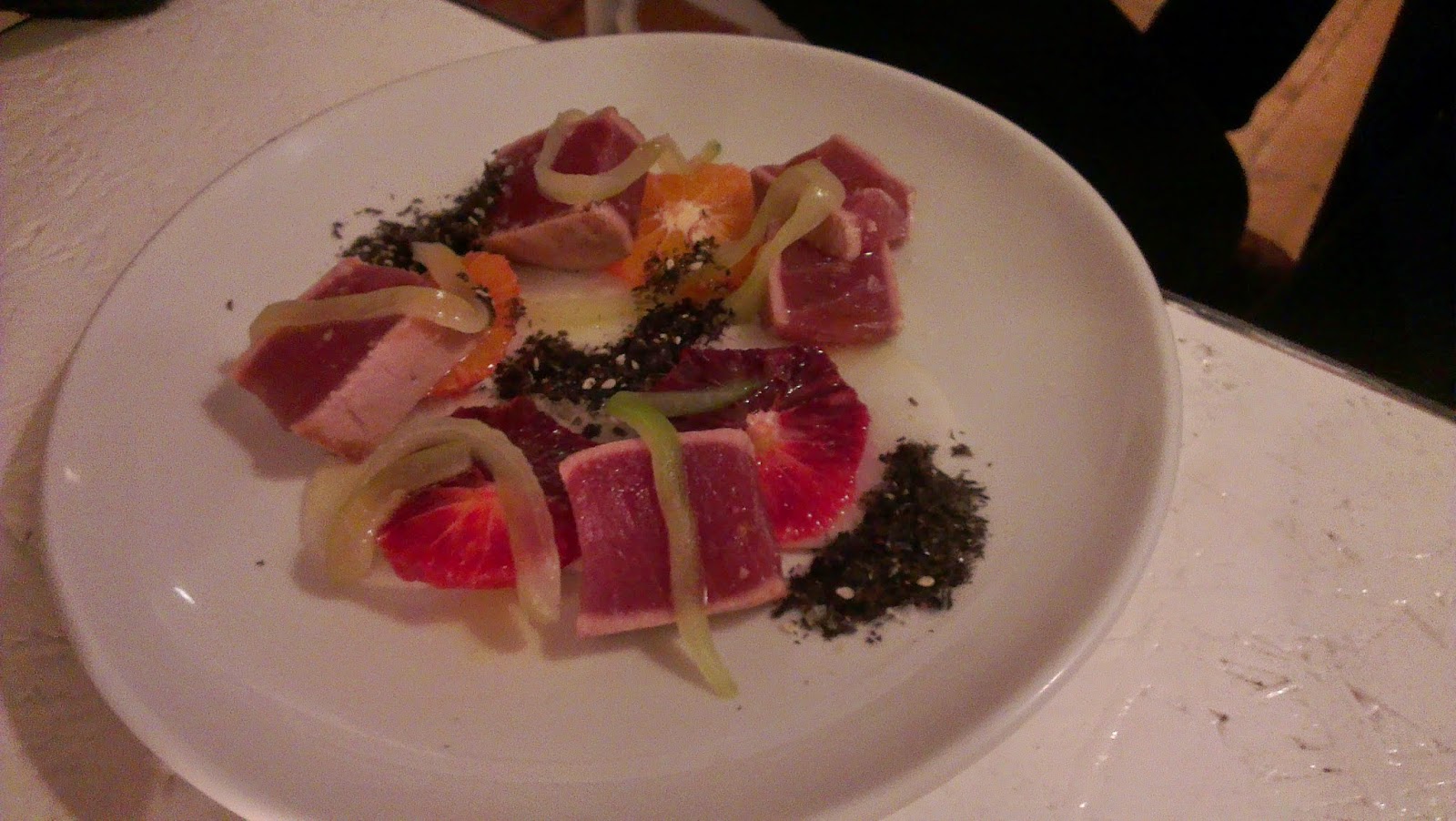 And finally, lest we start taking ourselves too seriously with all these 'adult' plates, we had a side of the mac n cheese we'd loved so much the first time, and happily, it was just as good. 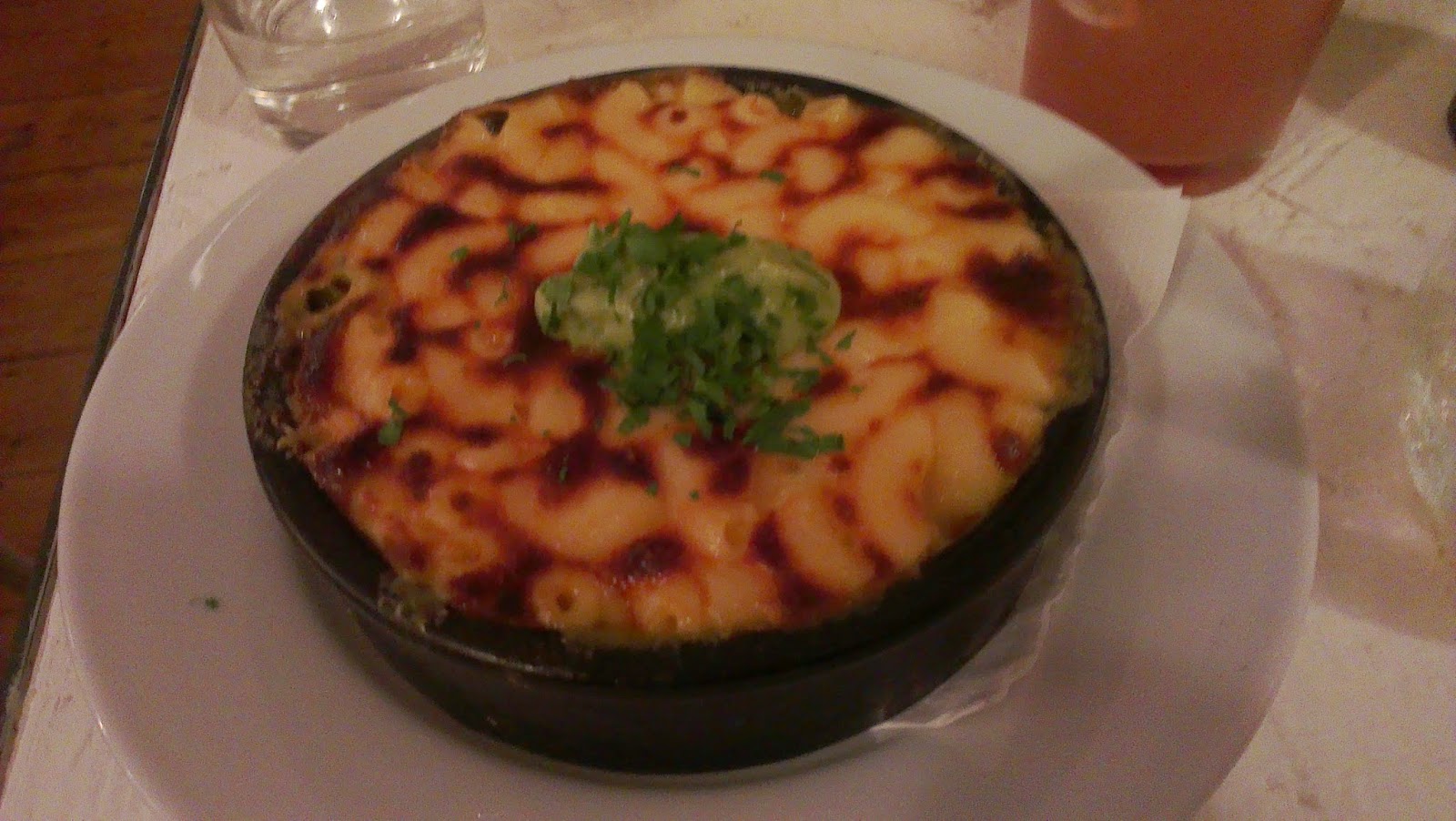 We rounded off dinner by sharing some 'beignets' without the fois gras. I was very tempted to try it, just to try the combination. I know they're famed for them. But I'm not even sure I would have liked it so much, adn it would have been a shame to not enjoy the dessert as much as I had the rest of the meal. The beignets came with a large puddle of dulce de leche, and it was all really tasty, although maybe just a tad too fried-tasting for me. The doughnuts had a lovely, almost gooey, doughy middle though, and the outside was crispy, almost caramelised in some places. And look at the size of them! Definitely a sharing dessert. 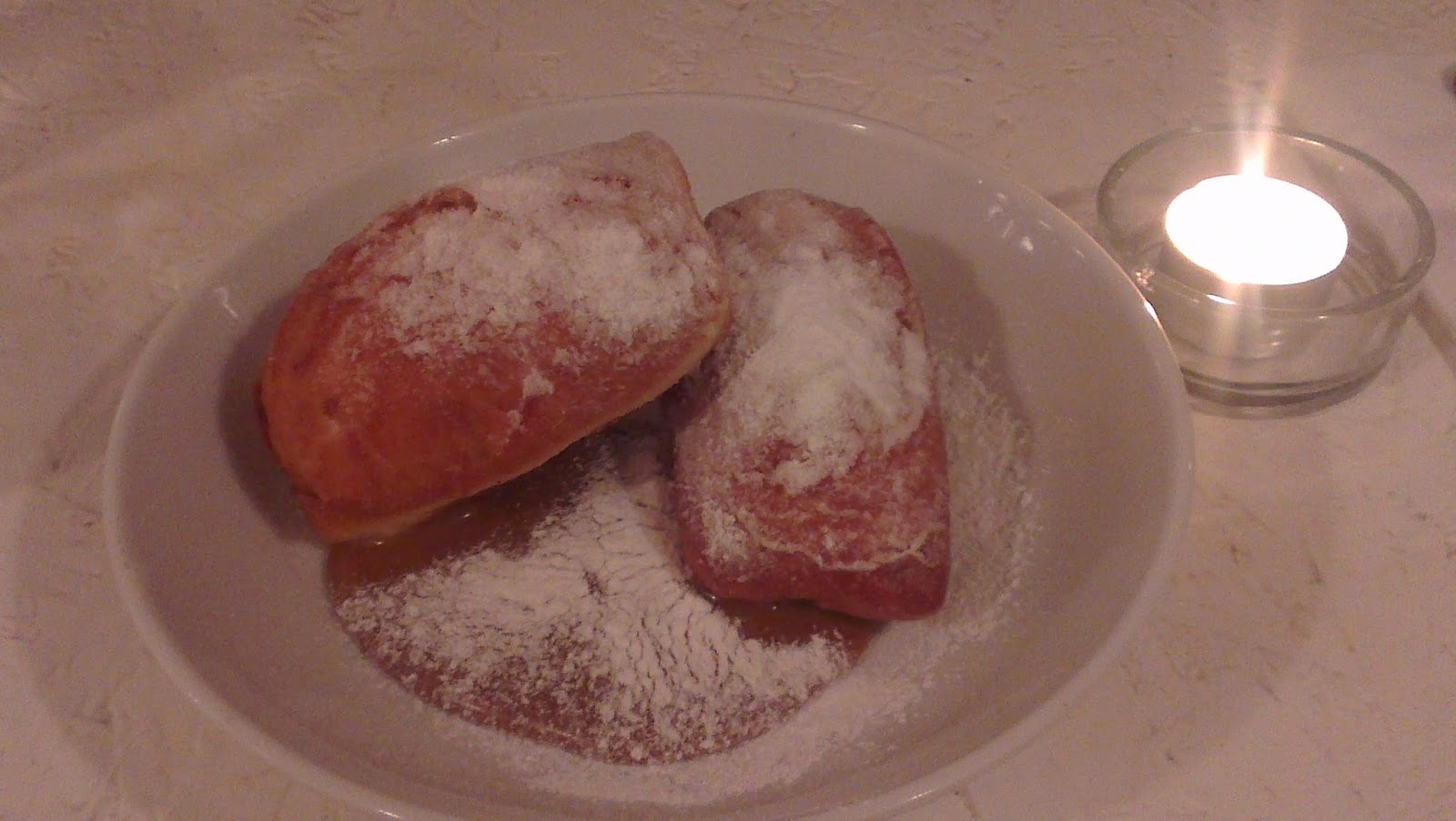 Stephen and I both came away in awe a little bit with what they are doing here. The restaurant is unassuming from the outside, but has a clean, yet warm interior - it might look like a typical new hipster joint but what Rita's doing here is that little bit extra special.

Posted by Ginglesnuff at 1:25 PM