After having gorged myself on chicken the night before - specifically fried chicken at Clutch - you might think I wouldn't want more of the same. And if you think that, you are wrong. Presented with several delicous-sounding sandwiches at Slap! in Dalston Superstore, including a grilled chicken option with chilli and spring onion pesto, or a roast beef with crispy leeks and horseradish creme fraiche, I opted for the panko fried chicken with honey and chilli slaw and coriander pesto. The pesto had me at 'coriander'. They all have silly names, like the 'Sex and the Satay' or the 'Bangh Mi Slowly' which is what you'd expect from a place that serves cocktails called 'The Whore's Handbag'. 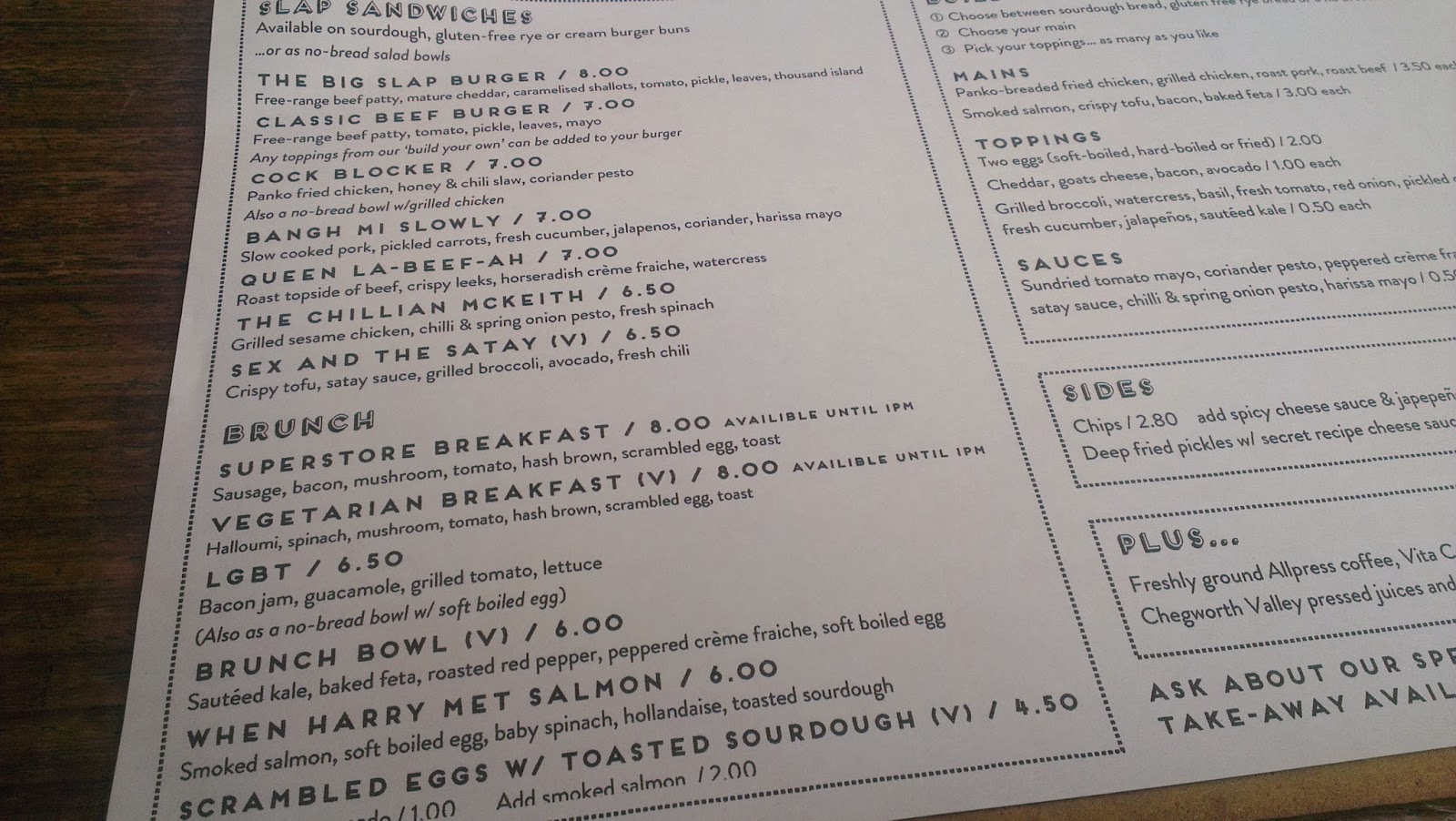 Stephen opted for a more traditionally breakfast ensemble, the When Harry Met Salmon - smoked salmon and soft boiled eggs with hollandaise and baby spinach. We thought this would come on toast but it also came as a sandwich. 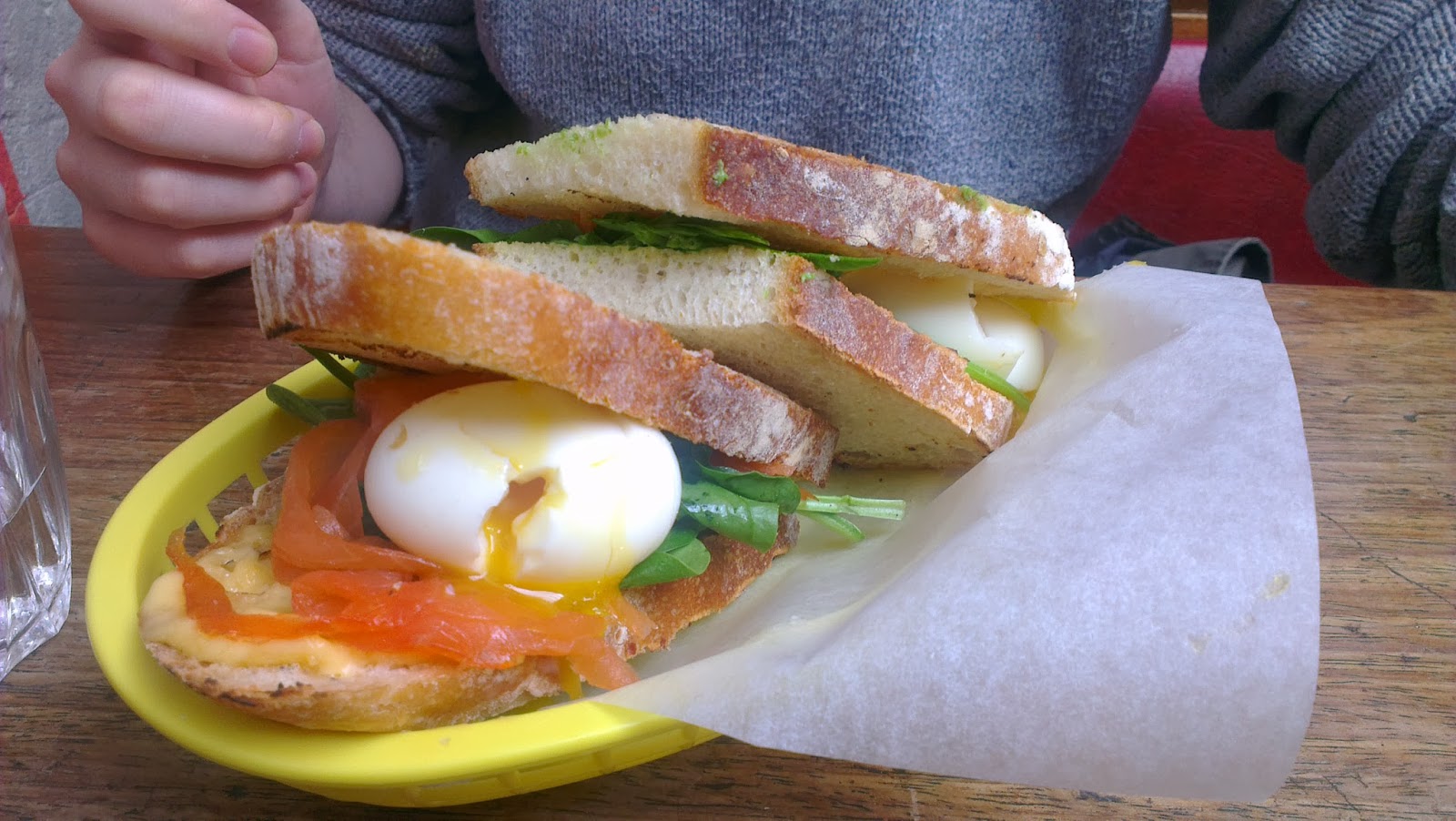 One massive sandwich. Mine was also huge. I can't believe I even contemplated getting chips with it - that would have been completely unnecessary. I think both of us would have been more than happy to just share one. What's that you say? Oh, yeah, of course I finished it. Rude not to. But Stephen, who was in the process of coming down with a stomach bug, left some of his. Three thick slices of smoked salmon were too much even for his salmon-loving self.

Anyway, the sandwiches - were tasty. At least, I thought mine was. The pesto was hugely garlicky (a plus) and the 'slaw', which was really just thickly cut red cabbage mixed with a few red onions was really nice. The honey completely blunted any bitterness in the cabbage, and a lot of it oozed out and created a pool of it at the bottom of my basket - perfect for dipping the extra bread of the sandwich in. 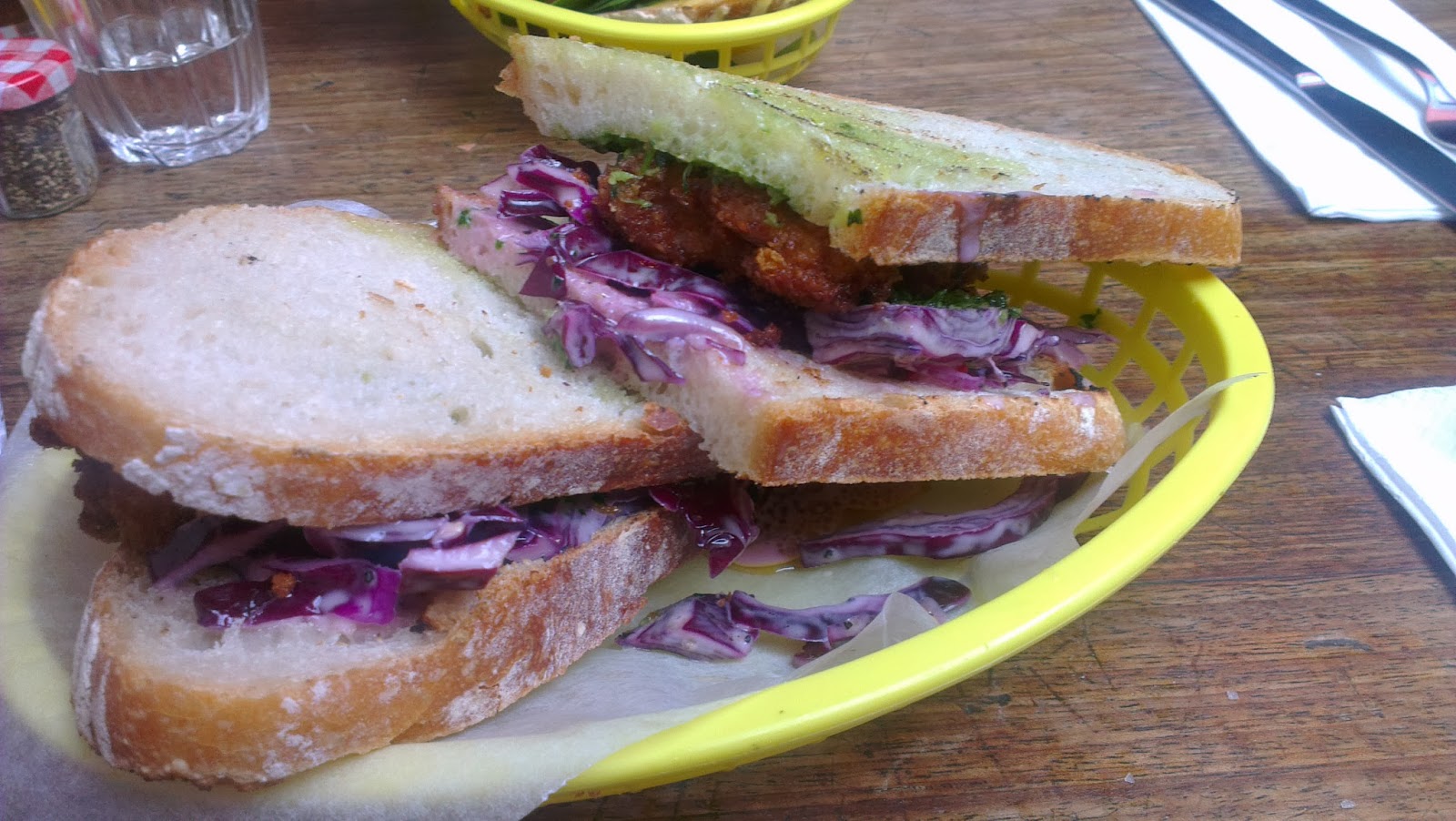 The chicken was thigh meat - always good. But it could have done with being given the escalope treatment and beaten into a flat shape instead of just large chunks which I had to wrestle to keep in the sandwich, and meant there felt like there was too much bread. Although the bread itself was tasty. I enjoyed eating the thing, but afterwards, I felt bad. It was all a bit greasy and heavy. Some fresh coriander or a few leaves of rocket might have done the trick to make it feel a little lighter and fresher. Stephen also felt a bit weighed down. For £7.00 it would be hard to find a more filling meal.

I've been to Dalston Superstore twice before - at night when the last thing you can imagine, among the sweaty, dancing drag queens, is a place you'd want to go for brunch. But actually, it's quite a cute cafe in the day in its own right. It's very colourful and was busy but not so busy you had to wait for a seat. Definitely worth bearing in mind if you want a bite to eat, especially if you need something to soak up your hangover, and elsewhere is too packed. I'm not sure if I would make the effort to go back myself (though reading the sandwich menu again while writing this has made me think I should give it another chance - but next time, go for a lighter option!). Perhaps Clutch had just spoiled me for my fried chicken needs the night before.