The Dirty Book Club has the 'honour' of being blogged about because way back when I started leafing through Time Out's 1000 Things to Do in London and compiling my spreadsheet of things I wanted to do, Robin Ince's Bad Book Club was one of those things. But, when I looked to see when it happened, it seemed he was no longer doing it - not in London anyway. But I kept my beady eye on him... Cue three years later and the announcement that Bad Book Club's naughtier younger sister was kicking off - Dirty Book Club. I had to go. And I thought my Meetup would like to go too.

The mere blurb about it proved immensely popular and I had almost 70 members sign up to go. The general public were also pretty keen as within 2 hours of tickets going on sale, half the tickets had gone. But a good whack of my group managed to get tickets and I reckon with about 30 of us there we probably made up a quarter of the audience.

With so many people, you would think at least some of them wouldn't end up liking the show but everyone I spoke to was full of praise. They all had different favourite bits but overall they just seemed to love it. As did I.

It wasn't quite what I was expecting - I thought it would be a shorter show of mainly Robin Ince reading from Mills & Boon ripoffs and casting about wry comments on the contents, with maybe another guest doing the same from their own choices. It was actually more of a variety show, and the reading of the 'dirty' books made up the minority of the entertainment (sadly there were many books he didn't get to as we ran out of time).

Robin had four other guests with him in fact, all people he has performed with in the past and it was very obvious they all knew each other and held each other in affection. It was great to see a woman performing and doing an excellent job of being funny - she did a couple of 'ditties' - the first one in the style of jazz, all about sexual intercourse euphemisms, and then another in 'rousing British wartime' mode about remembering Britpop. (Think a lot of people were fond of this one as we were all of a certain age.) I particularly liked her 'diary' a la Celia Johnson from Brief Encounter. I haven't even seen the movie but I knew exactly the sort of frivolous disposition she was lampooning.

We had some amusing anecdotes from Chris Neill who, unfortunately (or fortunately, as he put it, as he didn't have a punchline for his story) spent less time on stage than planned due to being struck down by some irascible broccoli, and exiting stage left to go directly to the toilet.

We were also treated to a cover of Prince's 'Sexy M.F.' complete with commentary on the absurdity of the song, and played on an accordion by Martin White. This act was really funny - only just about funnier than the meltdown he had at his first breath, being overcome by a fit of the giggles. With everyone in the audience in hysterics with him, it took many deep breaths to summon the iron will to curb the giggles and continue.

Some bits for me dragged a little - the various 'sundry' names of male and female genitalia was  laboured on a little too long. But on the whole it was a really good night. The 'word jazz' at the end - an almost freestyling concurrent recital of 50 Shades of Grey and the Shipping Forecast is genius even as it properly brought home to me just how awfully written 50 Shades is.

Here's a picture, just to prove I was there. 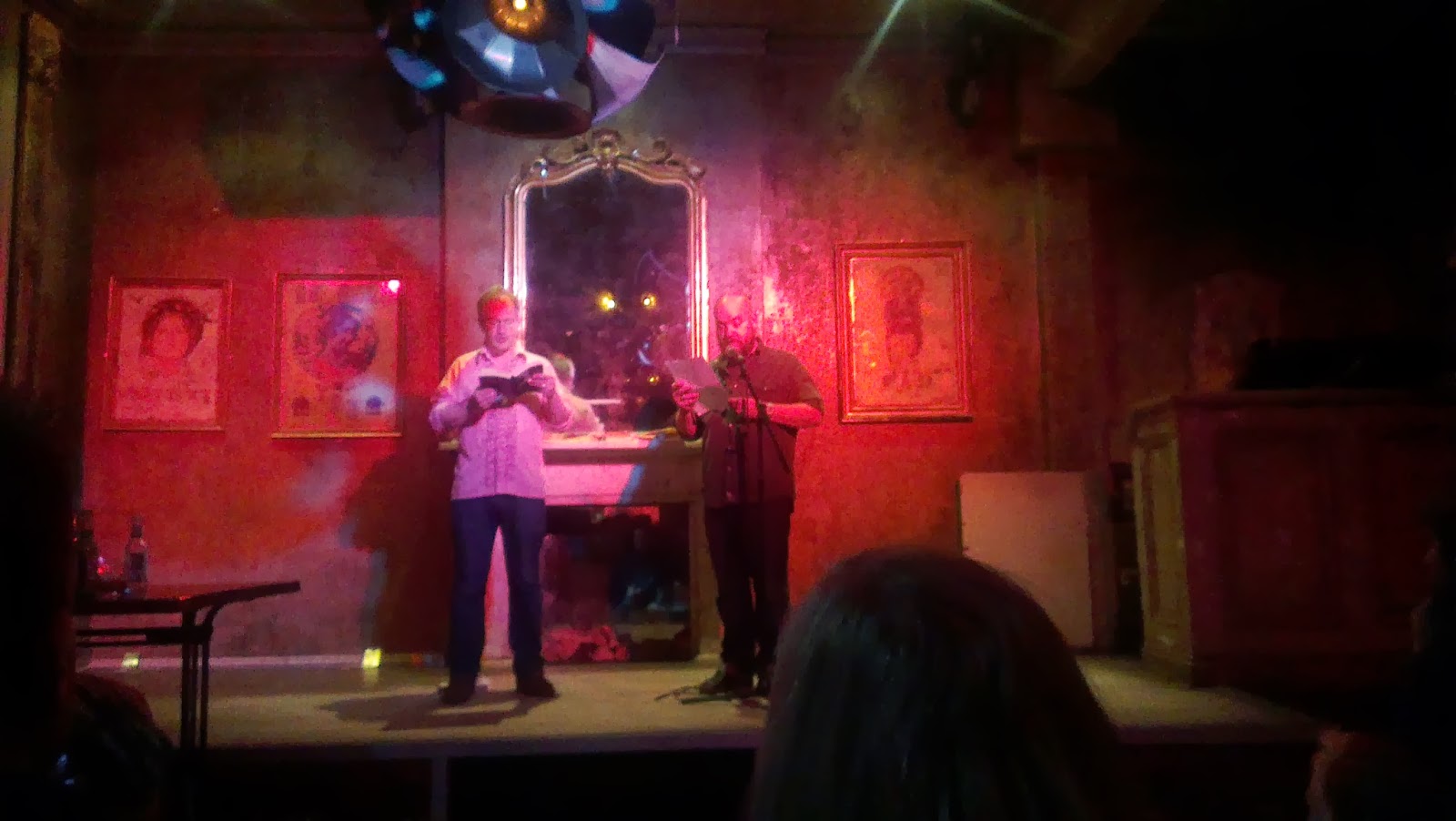 Posted by Ginglesnuff at 6:04 PM