Friday was pay day and an excuse to go out and spend some money. After weighing up Clutch versus On the Bab, my heart said Clutch so we wandered up in the rain to find the newly opened restaurant in the getting-ever-trendier area that is Hackney Road.

Clutch focuses on pretty much one thing: chicken, and of the fried variety. But, of course, done 'posh' - none of that overly greasy KFC or PFC type stuff and using only the best, well-bred chickens. But it's still fried chicken and I had lumped it into the 'dirty food' movement that London is still undergoing. As such I expected the restaurant to bear some semblance to MeatLiquor or other diner-type place. You know the thing: dim lighting, neon everywhere, falcon enamel dishes. I wasn't expecting the almost dainty, spacious and bright decor that Clutch is sporting. This wasn't just some trendy dive serving fried chicken, this was a proper restaurant! I loved the interior - I think it reminded me of an early 20th-century parlour with its striped black and white walls and green velvet chairs. Or perhaps something out of Alice in Wonderland. Anyone else know what I mean? 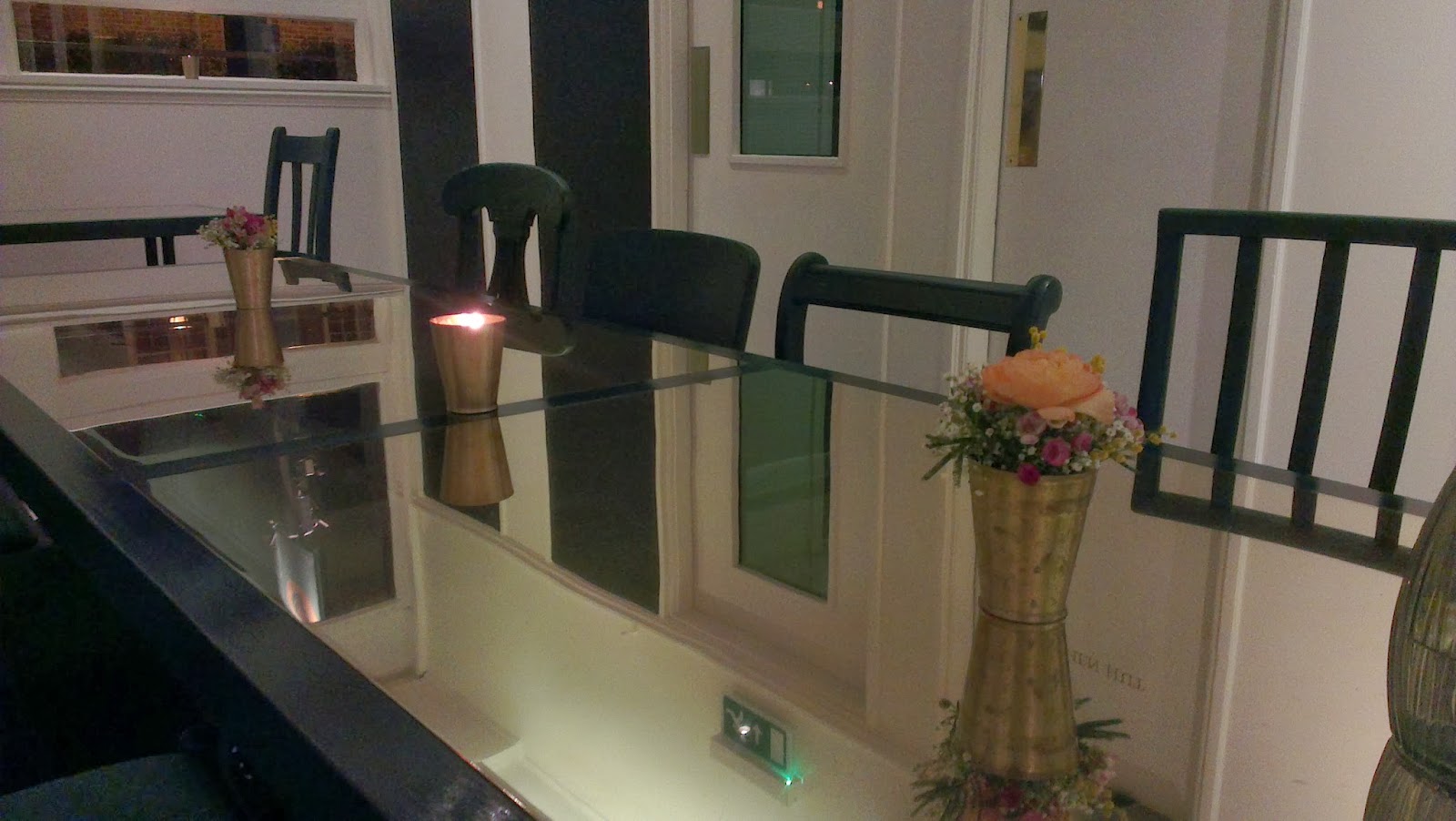 There were two other couples there when we arrived, meaning the place was pretty empty, though by the time we left every table had at least one party on it. Was it because it was January? Was it because it was raining? Or was it because people haven't quite cottoned on to the fact Hackney Road has some gems worth venturing off the beaten track for? I kind of hope it is the latter as I am getting quite fond of this neck of the woods and I like the fact that most of these places are not subject to massive queues.

What I think was the proprietor seated us and explained the menu (though it is so succinct I think we could have worked it out ourselves). You can have either a full bucket or half bucket of chicken - two flavours to choose from. A half bucket is three pieces of chicken, or half a chicken in other words. You can also have chicken tenders - for those who don't like to eat chicken on the bone, or you can have a portion of 12 wings. Both strips and wings come in two different flavours. 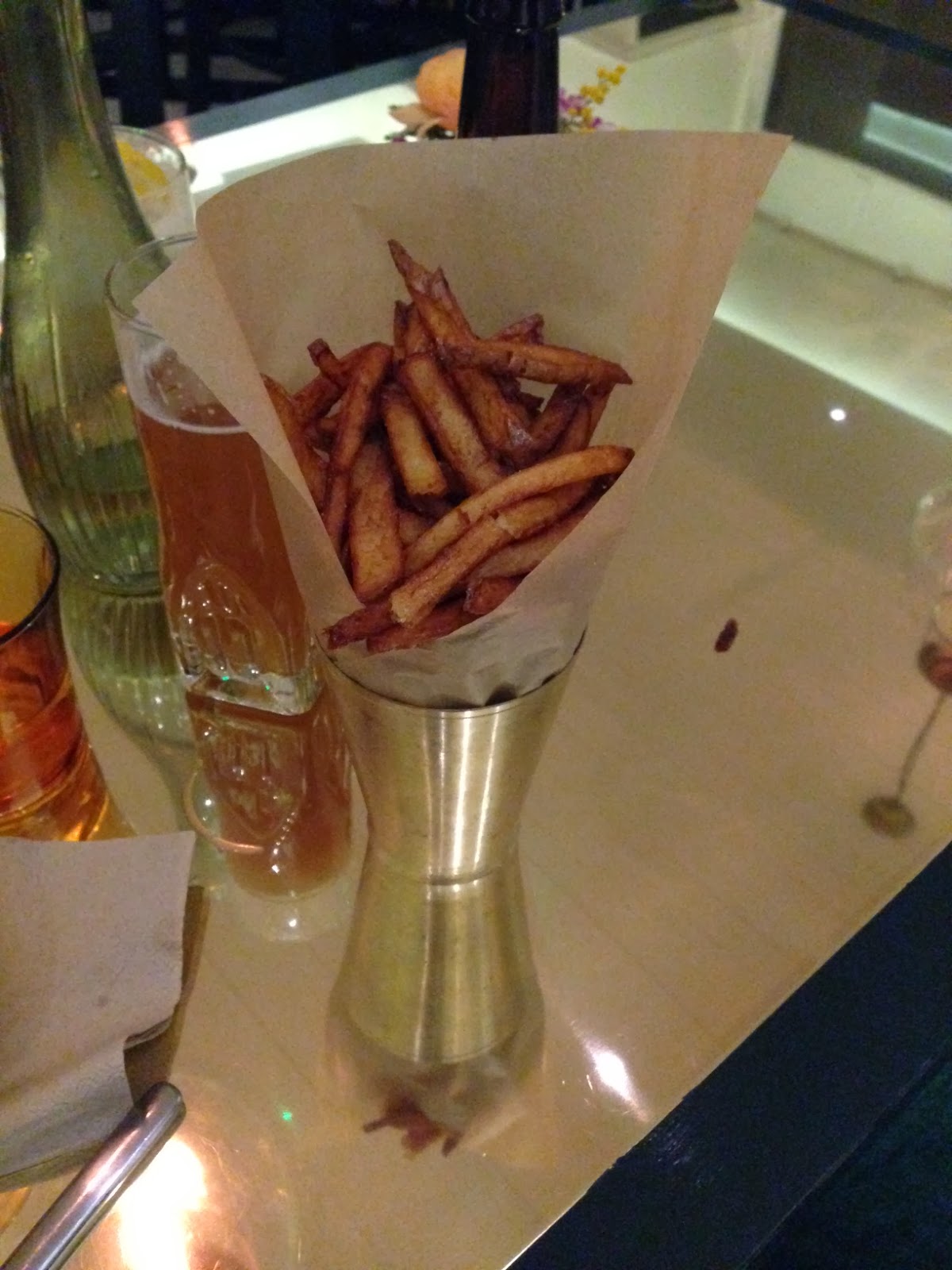 There is a range of sides like coleslaw, twice-fried french fries (in peanut oil), stuffing, and some 'dippety dips' such as chilli chutney or gravy for £1.

Wanting to sample as much as possible we decided to get a half bucket and some wings to share between us, plus a side of fries and a chilli chutney dip. We couldn't decide between to the two flavours for wings - sour and spicy chilli or honey and sesame so we were cheeky and asked if we could get half of each. They were more than happy to oblige. Out of the peppery buttermilk or sweet soy and garlic bucket, we got a half bucket of the soy and garlic.

So we ended up with three sets of chicken that could have ended up all tasting quite samey, but far from it. The flavours all complemented each other, but they were definitely all distinct.

The chicken itself was delicious - succulent and as pure white as the driven snow. The spicy and sour wings were covered in a sticky, dark sauce, with plenty of it left in the bowl for dipping in. The chilli chutney we ordered was fantastically zingy and fresh, but honestly, probably unnecessary with all of the wing topping going spare. The honey and sesame wings were my favourite - these were 'drier' and crunchier than the other ones with a lighter flavour, and I do just love sesame.

Both Stephen and I loved the chicken in our bucket - the batter was crunchy and full of flavour, very moreish. I happily ate it on its own when some of it fell off the bird. It inspired Stephen to want to figure out a version to do at home. This bucket also came with more sweet soy and garlic sauce in the bottom to pour over the chicken, and some spring onion and fresh chillies to liven things up and stop everything becoming too sweet. 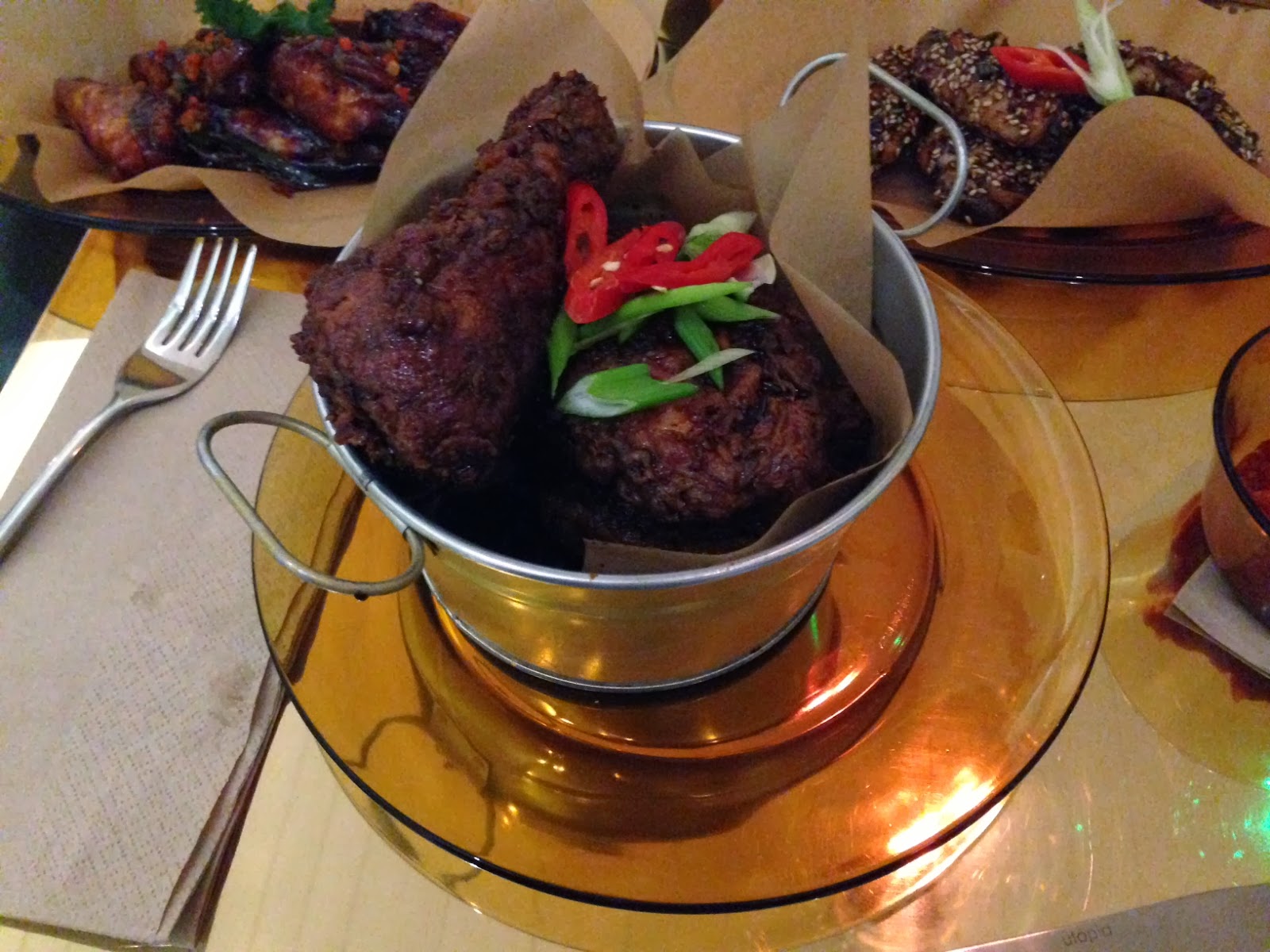 The fries tasted just like homemade fries (a good thing) though could have been a little thicker, and crispier. On the other hand, they were soft enough to soak up the extra sauces.

The music was an excellent accompaniment - especially if we had been dining before heading out to dance - mainly disco with a little Hot Chip thrown in. They served Kernel ale which pleased Stephen, and I had a refreshing Sour Grouse (their version of a whiskey sour) which was pleasant if a little light on the whiskey.

The staff were just lovely - we were even shown the huge back room which houses the bar and which they will soon make the main entrance so people can just hang out there before getting a table.

Stephen felt that the menu could do with a little variety - and it might be nice to see a chicken burger on there (I bet they'd do a hell of a job) or a salad as a main, but these are minor quibbles and to be honest I was perfectly happy with what was on offer.

It was great for a quick bite but would also be an excellent place to take a group of friends for a birthday or lively special occasion.

Find the menu & restaurant information on Zomato
Posted by Ginglesnuff at 1:15 PM