I don’t want to be smug but there are definite benefits to keeping a physical list of the food and drink places you want to try. Such as when you arrive at your intended destination to find that they are unexpectedly shut when their website says they’re open and now you don’t know what you’re going to do for lunch.

Such was the case when we rocked up to Dog Eat Dog on Sunday in Angel (whose owners are currently considering their proposition) and were left in the lurch. A quick consultation of my blog and we decided to hop on a bus over to the Fox and Pie in Stokey (only just noticed the animal theme there).

This was an excellent decision for a Sunday afternoon. It was bitingly cold so what better than to warm up with some comfort food? I tried to order a savoury pudding but they were out of the chicken and leek one (clearly everyone had the same idea) so I had lamb and rosemary instead. Carolyn had the veggie pie. Both came with cabbage, carrots, some lovely little roasties and a bit of broccoli I happily ignored. 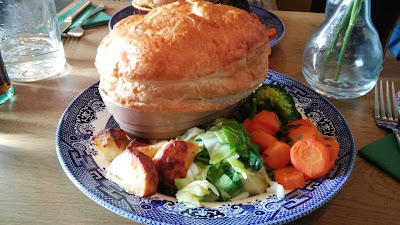 These pies were topped with pastry bursting out of their dishes, straining to reach the sky. Inside was a very flavoursome filling – mine had very tender lamb (and quite a lot of it) sitting in a ‘gravy’ that was not the usual thick and heavy dense stuff but basically seemed to be a stock flavoured through the cooking of the meat. It was very pleasurable. 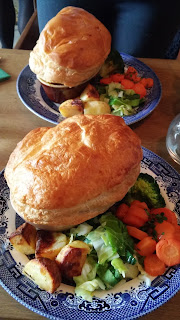 And then, because we’re gluttons we ordered a dessert each too. One treacle sponge, one rhubarb crumble. While these were nice enough to eat, they didn’t evoke the same positive reaction as the pies had. We would have liked more crunch in our crumble and the base of the treacle sponge was a little chewy.