Behind This Wall, 18th March

There are very few bars in the East London area that I haven’t now been to. So when a new bar opens it pretty much goes on the list immediately. 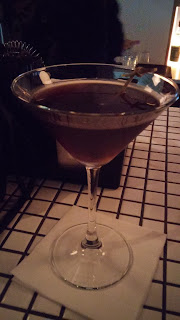 Behind This Wall is a new one on Mare Street – but not the end of Mare Street you probably think. It’s up past Hackney Central, not near the bars and restaurants that have sprouted by London Fields. Which might explain why, on a Saturday night when I walked past the first time, there were people outside trying to beckon you in. We had other places to go that night, but I returned about a week later, on a Friday. It wasn’t hugely busy, but it’s also tiny so that’s probably a good thing. It’s got a very clean, DIY feel to it. The tables and chairs feel like they’re all made of MDF, reminding you of being in Homebase or MFI (if anyone remembers that). It seemed that most of the clientele were the owners’ friends – which is exactly what I would do if I owned a bar. For such a small place, and one that doesn’t stay open that late, we did wonder why the music was quite so loud, but I liked the place.

The drinks are classics with a twist, in the main. For example, the mojito my friend had was made with sake, yuzu, mint molasses and despina. I had the Corpse reviver – which was pisco, herbal liqueur, coffee liqueur and had an umeboshi plum sunk into it. Do not eat the plum. It is most definitely there to infuse the drink with its flavour and not for consumption. It is basically a pickled fruit and tastes of bitterness and vinegar. Apart from this, couldn’t fault my drink. The Sandy Collins I followed it with was also very good, and my friend got them to spike their Shirley Temple with vodka for her drink. I would happily venture behind the wall again.

Speaking of cocktail bars that are off the road well-travelled, I also popped to Machine No 3 the other week and completely forgot to write about it. Named for the launderette that it used to be, this is pretty much in Homerton, very near the Kenton. At 11 pm and so far from everything else, I was unsurprised that there were only about 6 other people in the place besides us. We had a Basil and Blueberry that was made with quinoa vodka and a Rum Manhattan with xocolatl mole and marasca syrup and they were more than lovely enough but it’s too far for me to come back to on a regular basis. We especially liked all the different cocktail ingredients laid out like an apothecary's shop, and the place is also good for craft beer, so if this was my neighbourhood then I imagine I would be very tempted to pop in more often than I should. 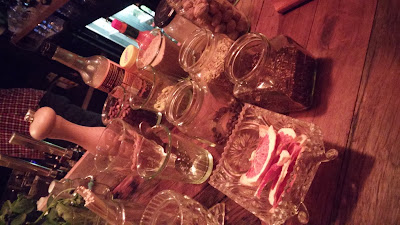 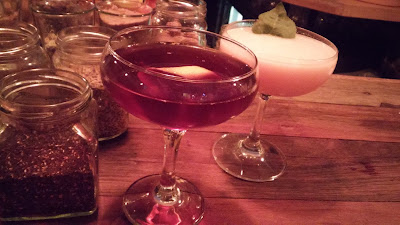 Anyway, after BTW, we went over to Dalston for a variety of whisky sours at Whisky Sour taking place below Pelicans and Parrots before giving Ruby’s Lounge another shot (was not a fan of the music), heading to The Dalston Jazz club which had emptied because of a fire alarm and ending up at the stalwart that is The Haggerston. Another successful Friday night crawl. 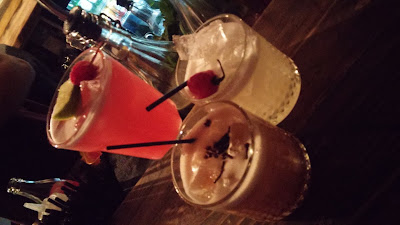 Posted by Ginglesnuff at 1:06 PM

Email ThisBlogThis!Share to TwitterShare to FacebookShare to Pinterest
Labels: bars, Behind This Wall, cocktails, Dalston, drink, Hackney, Machine no 3, Pelicans and Parrots