As has been noted before, I am willing to travel for food that has potential. So when I saw Earl’s cheesesteaks had a regular base at Liverpool Street I knew I’d have to give up a lunch hour to get over there and try them out.

When I arrived they offered me a loyalty card and seemed a little taken aback when I said I would probably not be returning too often because I work in St Paul’s and had only come down to try them! 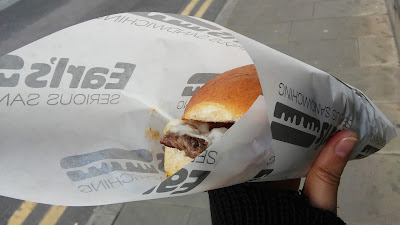 Unlike Liberty Cheesesteaks they make no claim to authenticity, they’re just doing a cheesesteak the way they see fit. And let’s face it, you can’t go too far wrong with meat and cheese. Earl’s use bavette steak and provolone (a classic melty cheese) and give it a twist with pickled chillies and their own sauce. At first bite I was worried it would be a little dry but I soon got a mouthful of sauce which did its job. Towards the end I had a bit of meat that was a little gristly but mostly it was nice and tender. So it was a decent sandwich but I don’t know that I would use my precious 60 minutes in order to have it again. 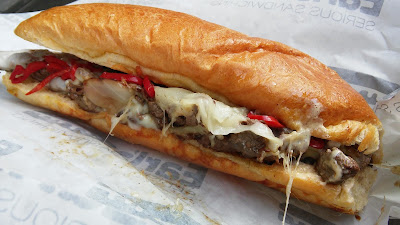 While I was there I perused the rest of the menu and my God, When Mac Pulled Pork looks like something special. It’s pulled pork with a deep friend mac and cheese patty and scotch bonnet sauce. I have to have it. So, Earl’s, I will be back!
Posted by Ginglesnuff at 11:32 AM