I’m all for getting bang for your buck but sometimes a little warning of how much food is about to come your way would be a good idea! We totally over-ordered at Bird because of this, and then, seemingly due to a quirk of fate, my friend and I did this at Joe’s as well.

I know that Stephen and I can easily eat a whole chicken between us so ordering a half chicken and another main between me and my friend seemed like a pretty sensible decision. It wasn’t. So we ordered the beef rib. What came to the table was not just one rib to share as I would have expected, but two! Yes… two! I asked Joe’s on Twitter and they confirmed that this dish is normally the one rib at 1kg. But they said sometimes, if the chef thinks it looks a bit small he’ll give you extra. So this must have been the case here which ordinarily is great but it did mean we couldn’t face finishing the equally good chicken. Without a beef rib each to eat I think we would have polished it off with room for more quite easily. But sadly we got well stuck into the beef and it was so good we couldn’t stop so we ended up leaving half the fried chicken languishing. And what I did eat of the chicken I ate out of a duty to try it, I certainly didn’t have any need to eat more! Should have asked for a doggy bag. (Or better yet – UK restaurants – start doing this as standard!).

Joe’s Southern Kitchen first caught my eye when I noticed they had spinach and artichoke dip on their menu, something I haven’t seen on UK menus at all. This was my sole reason for putting it on my List. But in the interim, from following their twitter account, I began to want to try some of their other food as well. For ages they were known for their beer can chicken (another American standard) but lately they’ve got quite a following for their fried chicken (and even changed their Twitter handle to reflect this). And so it was the fried chicken that we tried. 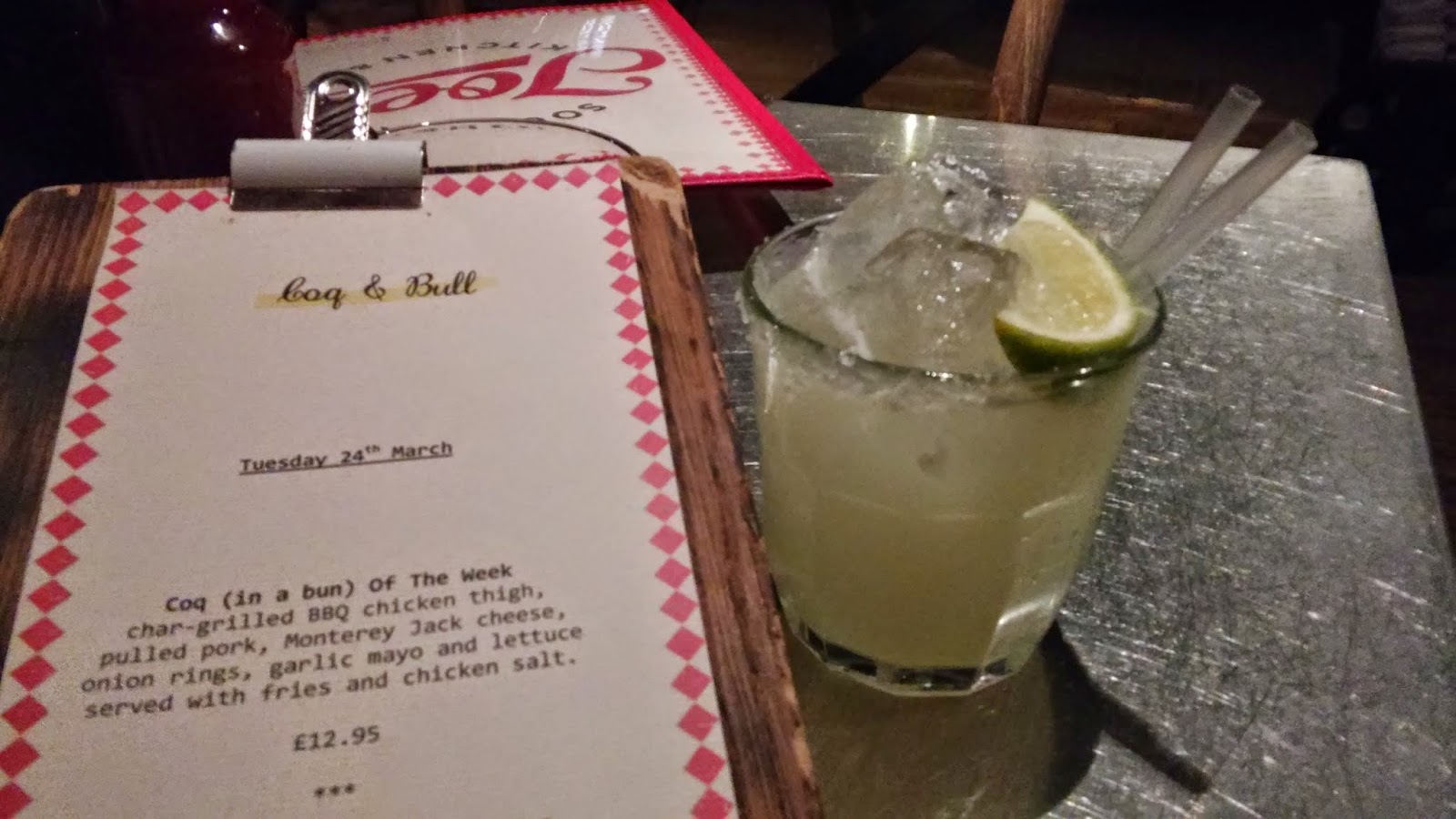 But I’m getting ahead of myself. I got there at about 6:15 and I noticed that happy hour finished at 6:30 so I quickly ordered me and my friend a margarita for £4 each. Worth noting that cocktails are £8 otherwise for the classics which isn’t a bad price at all for central London.

I did indeed manage to get the artichoke dip to start and we also got the corn bread with paprika butter and green tomato chutney. They have a strong ‘snacks’ menu – even better than their starters menu I would say. Jalapeno poppers and popcorn shrimp also feature so it was hard to narrow it down. I was a little disappointed when the dip arrived. It was in a tiny bowl. Typical England, I thought, thinking about the vat it would probably have come in in the States. Oh Joe’s – you totally fooled us with this serving size – we had no idea of the portions to come! The dip was ok – very cheesy, but could have done with being a tad warmer to make it easier to scoop. A bit more seasoning wouldn’t have gone amiss. Also, it was supposed to be toasted bread but as you can see this has barely seen the inside of a toaster. Crunchy bread would have made for easier dipping. Pita chips might have worked nicely. 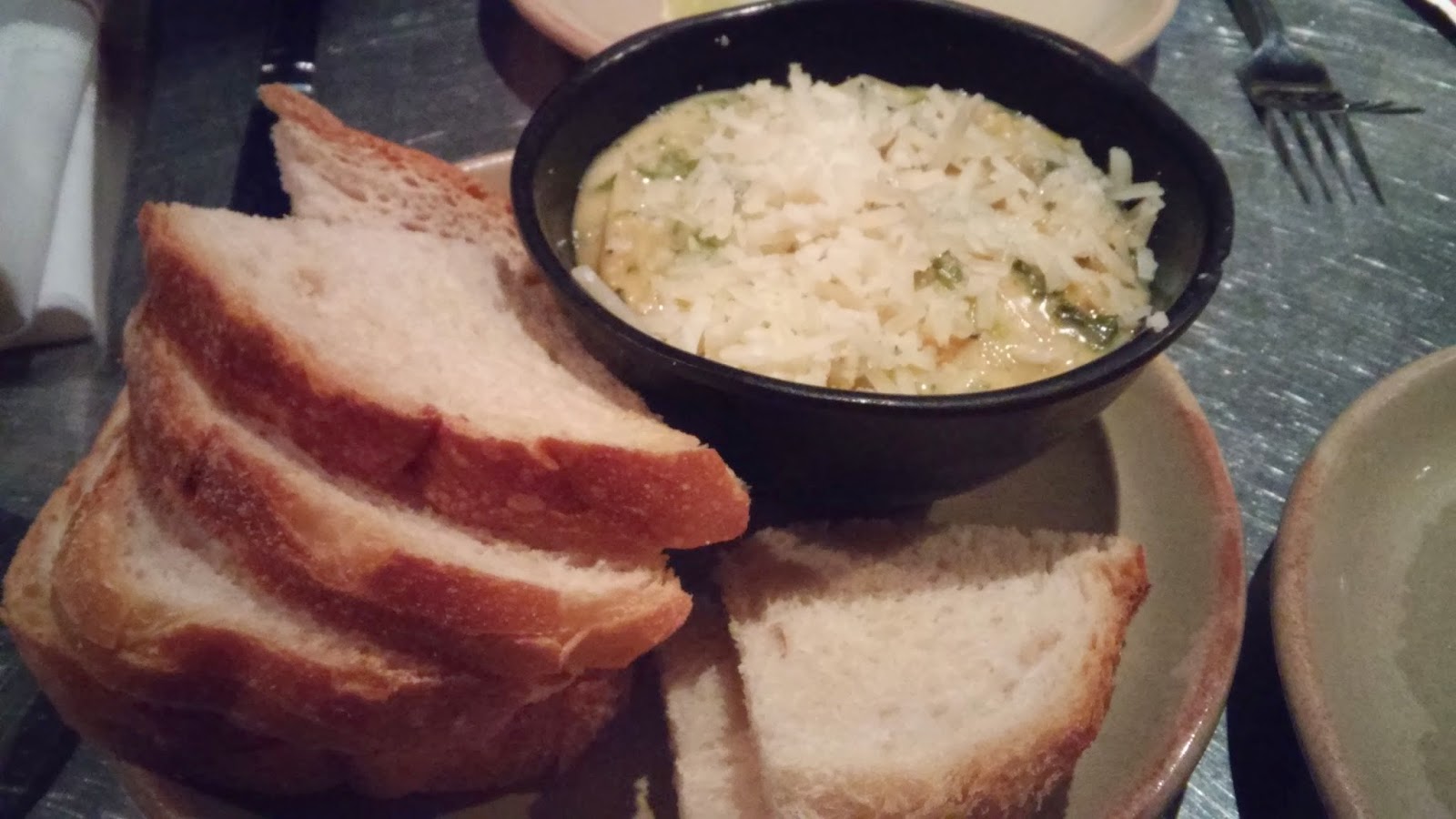 The cornbread, however, was fantastic. It was much cakier than cornbread I’ve had in the past and we smothered it with the paprika butter which melted into the warm bread. Just yummy. The tomato chutney was nice enough but I didn't think it was needed here. 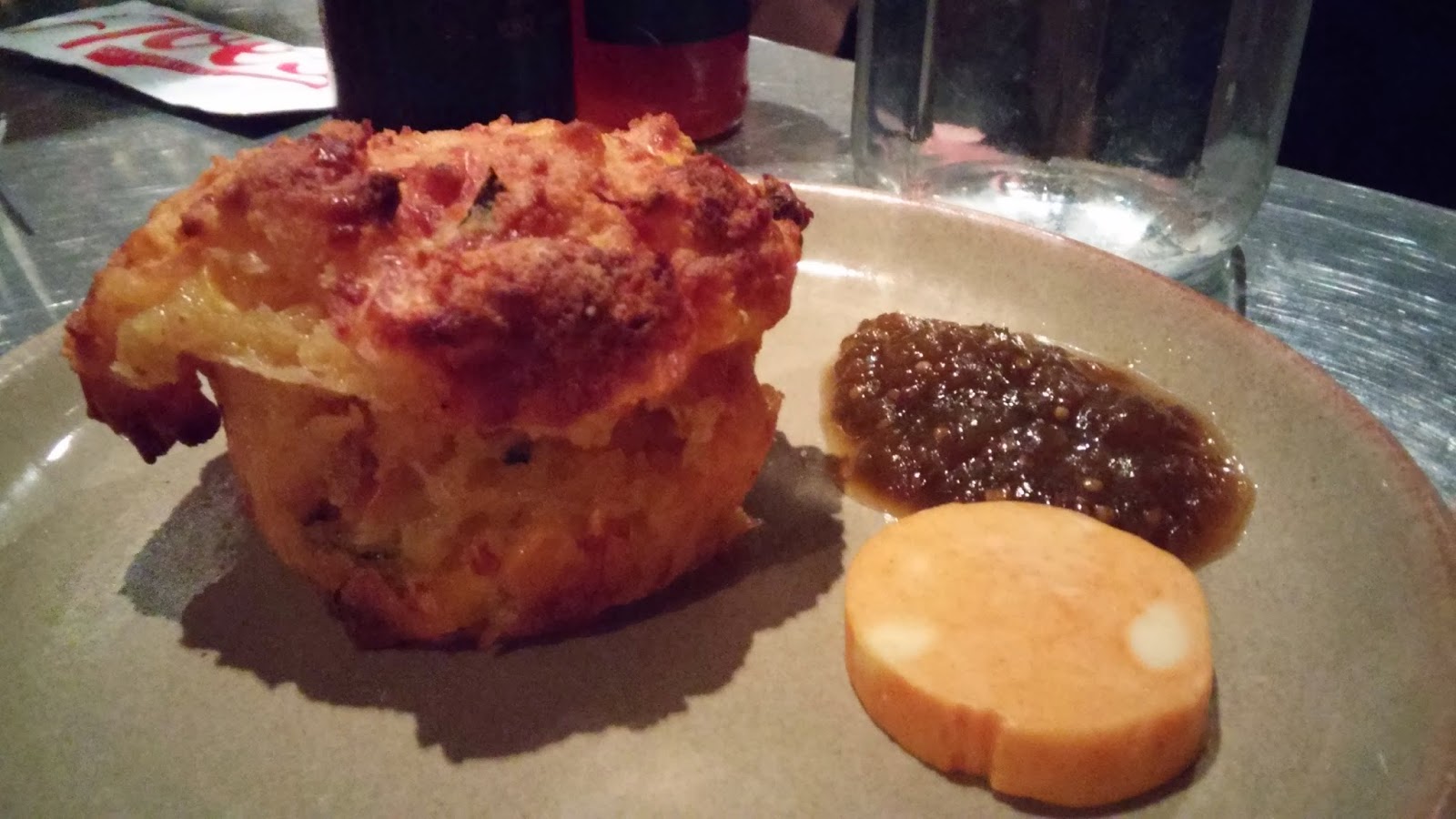 Then came the mains, which we ordered with southern fried potatoes (or home fries). You can't go massively wrong with fried potatoes but I have to say they did get them massively right, having a really good crunch and seasoning. I’ve already said how defeated we were by the mains. The chicken was spot on – succulent, with a crunchy, well flavoured coating, though it didn't seem to come with the tabasco honey I'd heard so much of. Perhaps this was the hot sauce provided on the table anyway. The beef had a nice bite and a great taste. Can it compete with somewhere like Pitt Cue or Hot Box? It’s not quite there (few places are) but it is much more than just lip service to BBQ food. I would happily order the same again. It's just what you want out of this kind of restaurant - nothing fancy, just tasty, dependable food. 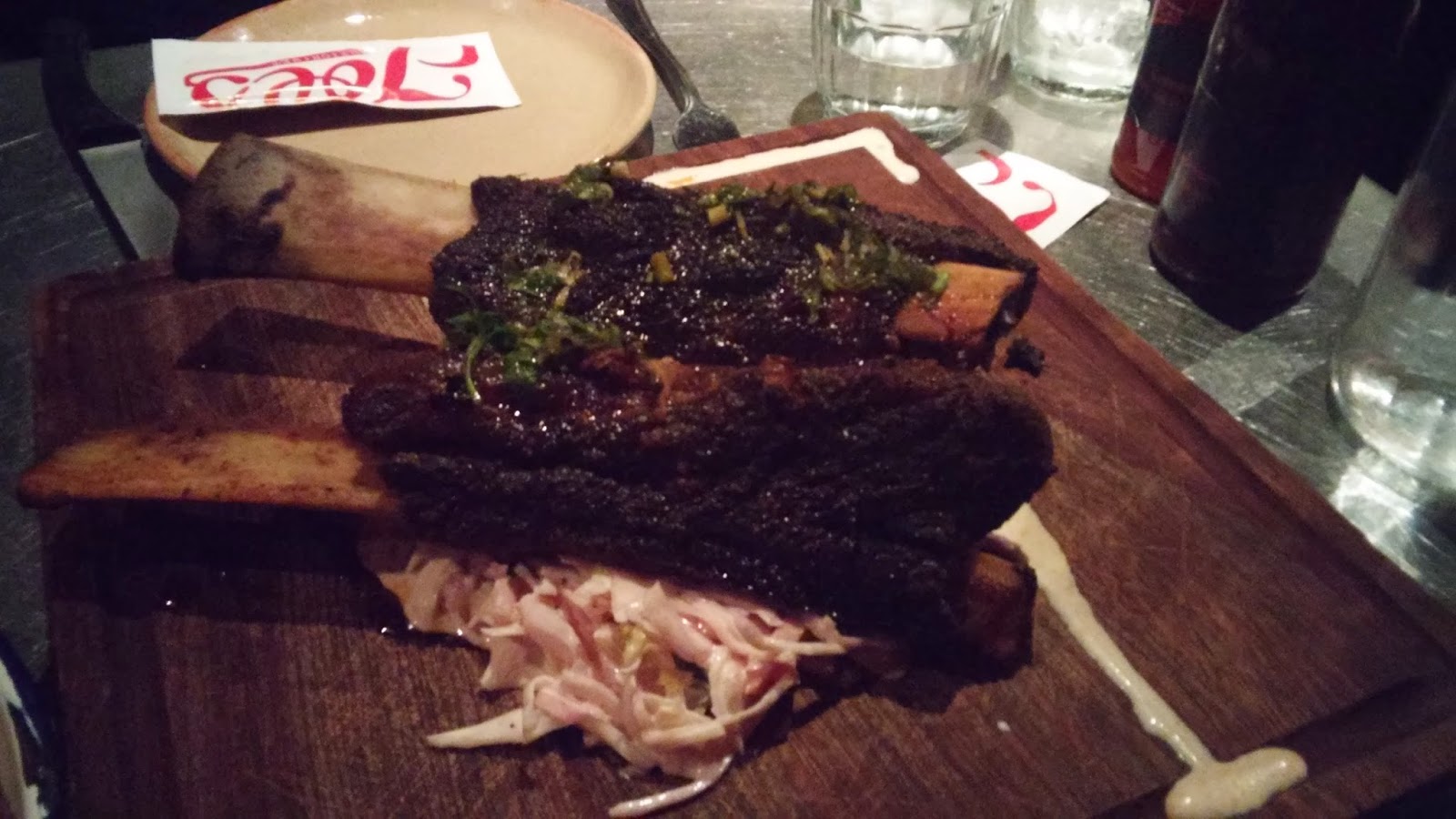 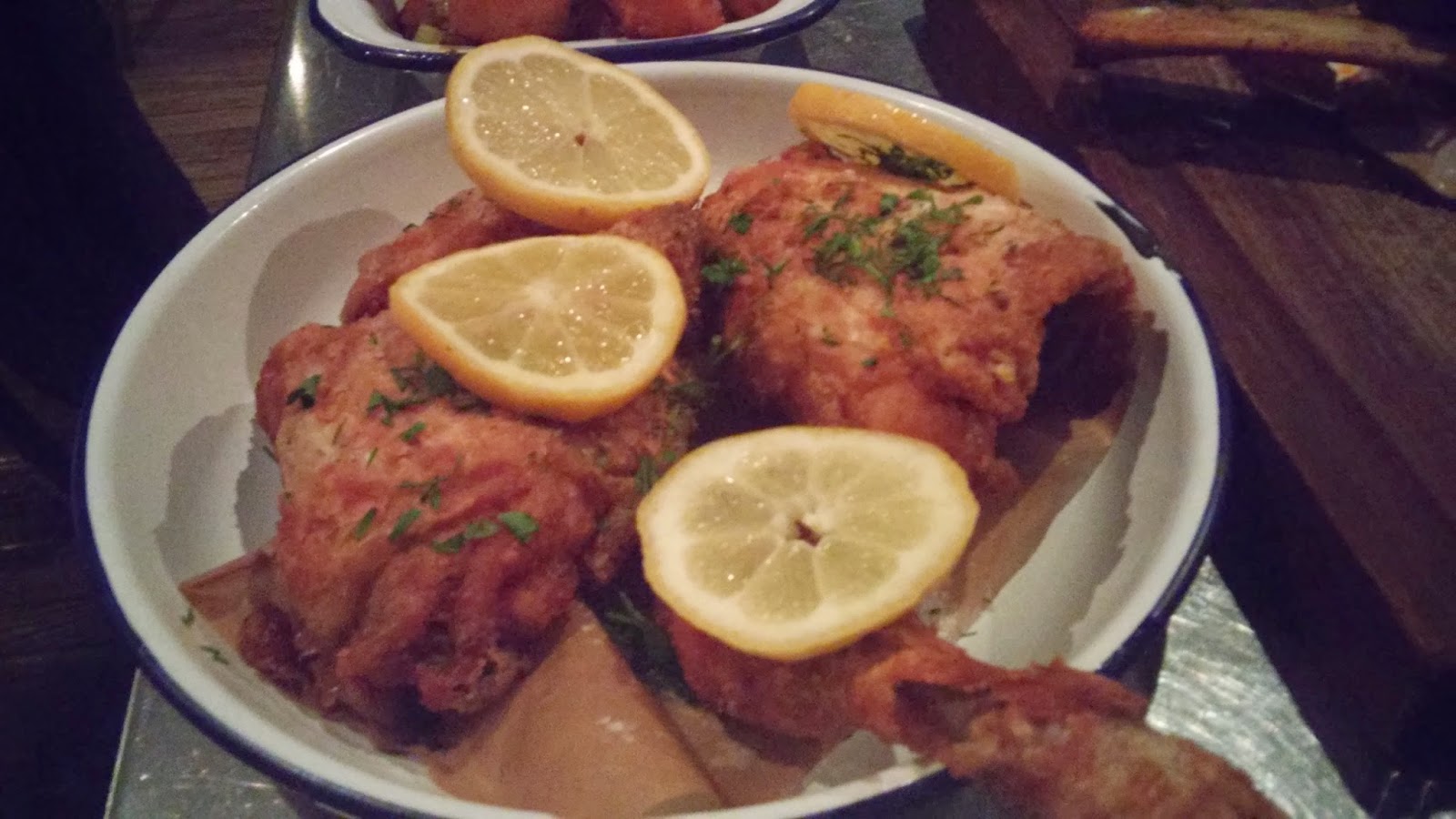 Unsurprisingly for this part of town, there seemed to be quite a lot of tourists. You could tell by the conversation that the two parties next to us were on holiday (there was talk of trains to catch and ‘treating themselves to dessert cos they’re only here once’) but unlike many other places in Tourist Hell (Covent Garden), Joe’s isn’t just phoning it in. I need to go back and work my way through the rest of their snacks and give the beer can chicken a try! Or I might just have to try their new outpost in Kentish Town. That area is ripe for exploration…

Posted by Ginglesnuff at 1:08 PM