I competed in a national championship at the weekend. And yet, I’m no athlete, training all hours of my spare time in order to become the best I can be. No no, anyone can compete in these, for they were the National UK Rock, Paper, Scissors Championships and in order to participate all you needed to do was buy a ticket. Said ticket earned you a place in the main competition, a knock-out style tournament, where in order to move on to the next round all you had to do was beat the person you were up against. Best of three.

I absolutely loved this. While there were several stratagems posted around – what were called ‘gambits’ that you could employ, in reality it was purely down to luck not skill, meaning everyone could concentrate on having fun, rather than trying to prove their ability. And this many did with gusto. There were plenty of newbies (Wacky Nation, who run it, got quite a lot of press this year) but there were plenty who obviously come every year, and some who had travelled from all over the land and beyond. We even had some competitors from Sweden. 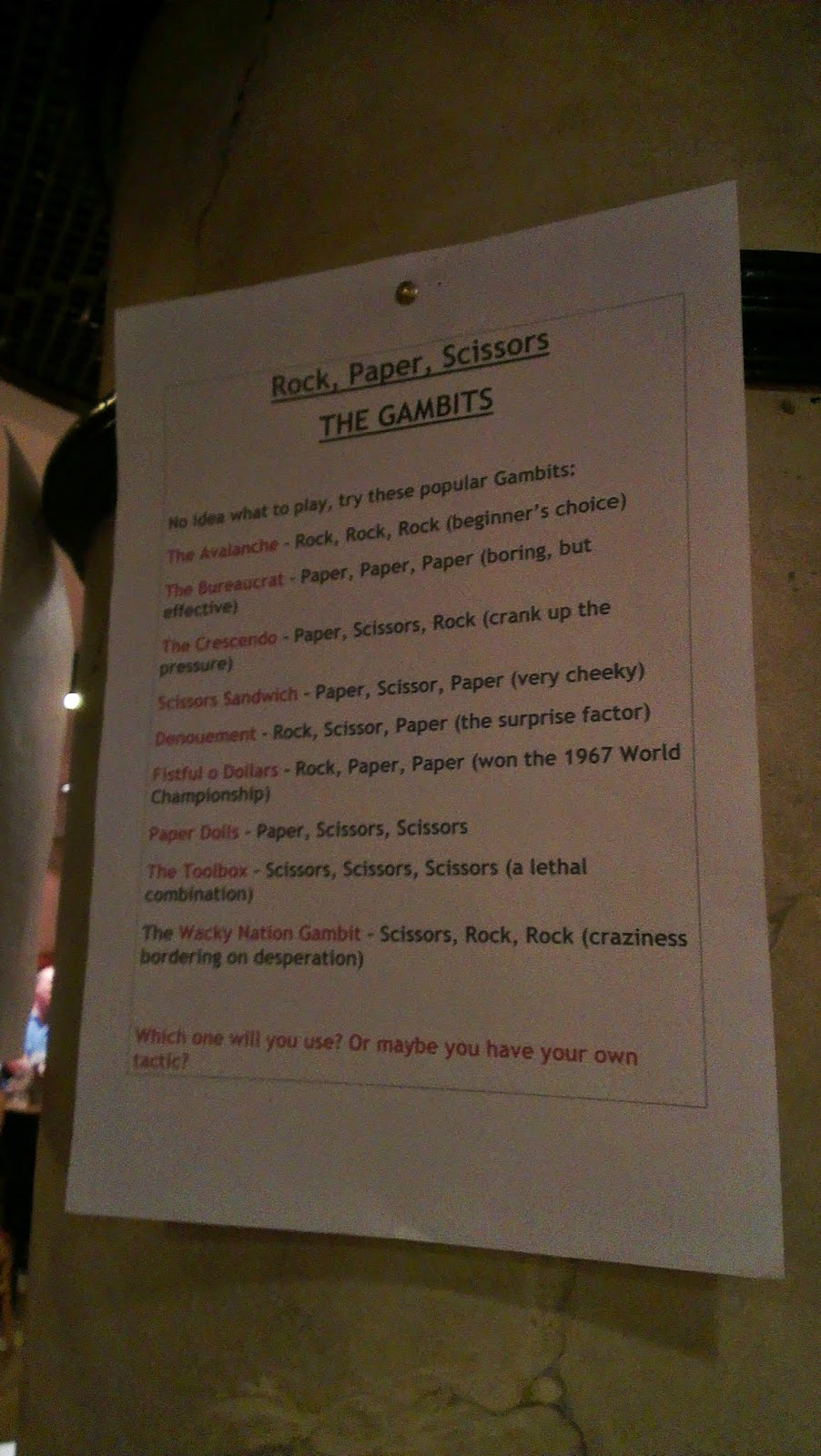 Your number was called and you stepped into the ‘pen’ to await your turn. There must have been about 130 entrants in the end, which meant 65 games in the first round, but they’re lightning quick so you don’t get bored. Sadly I crashed out in my first game. Stephen did a bit better by lasting a further two before being beaten by the guy who went on to come fourth. 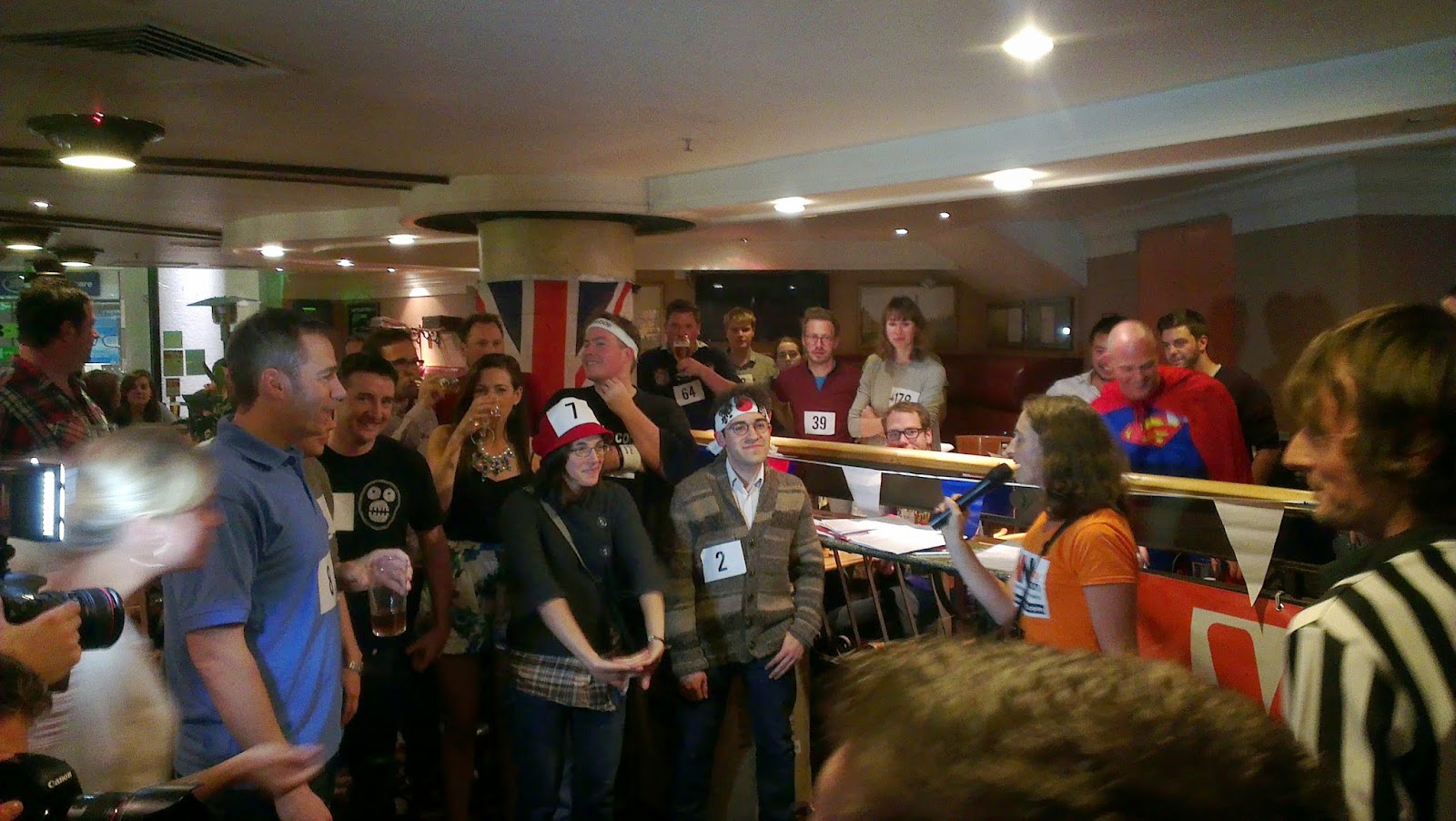 It’s true that as people lost, the crowd thinned slightly but there were still a significant people who stayed right to the end. Why, when they no longer had a personal stake in it? Because it’s such a laugh. People really ham it up – pretending to psyche out the other contestant or mugging for the crowd by limbering up or stretching before their turn. There was a large group of lads who clearly come every year who would chant their ‘teammates’ names, going so far as to give them massages and refreshment in between their throws as if they were Rocky Balboa returning to their corner for a pep talk. Some even had overly exuberant 'coaches' getting into the ring and arguing with the ref on their behalf. It was all very seriously silly. 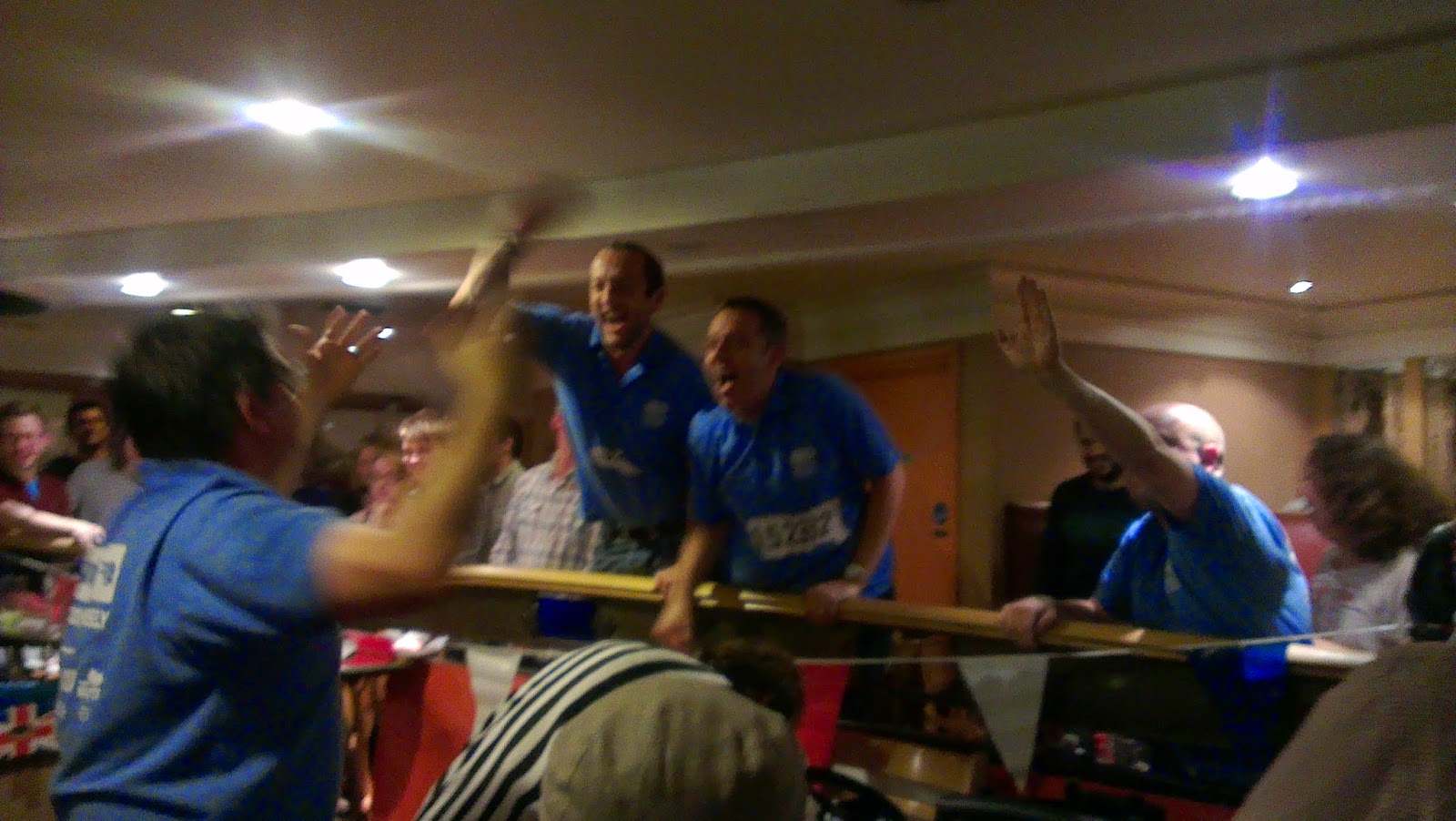 To highlight this, fancy dress is encouraged, though this year there was only a Darth Vader and a Superman who made the effort. Each time they played they entered ‘the ring’ to everyone singing their ‘theme tune’. I think you know what I mean. 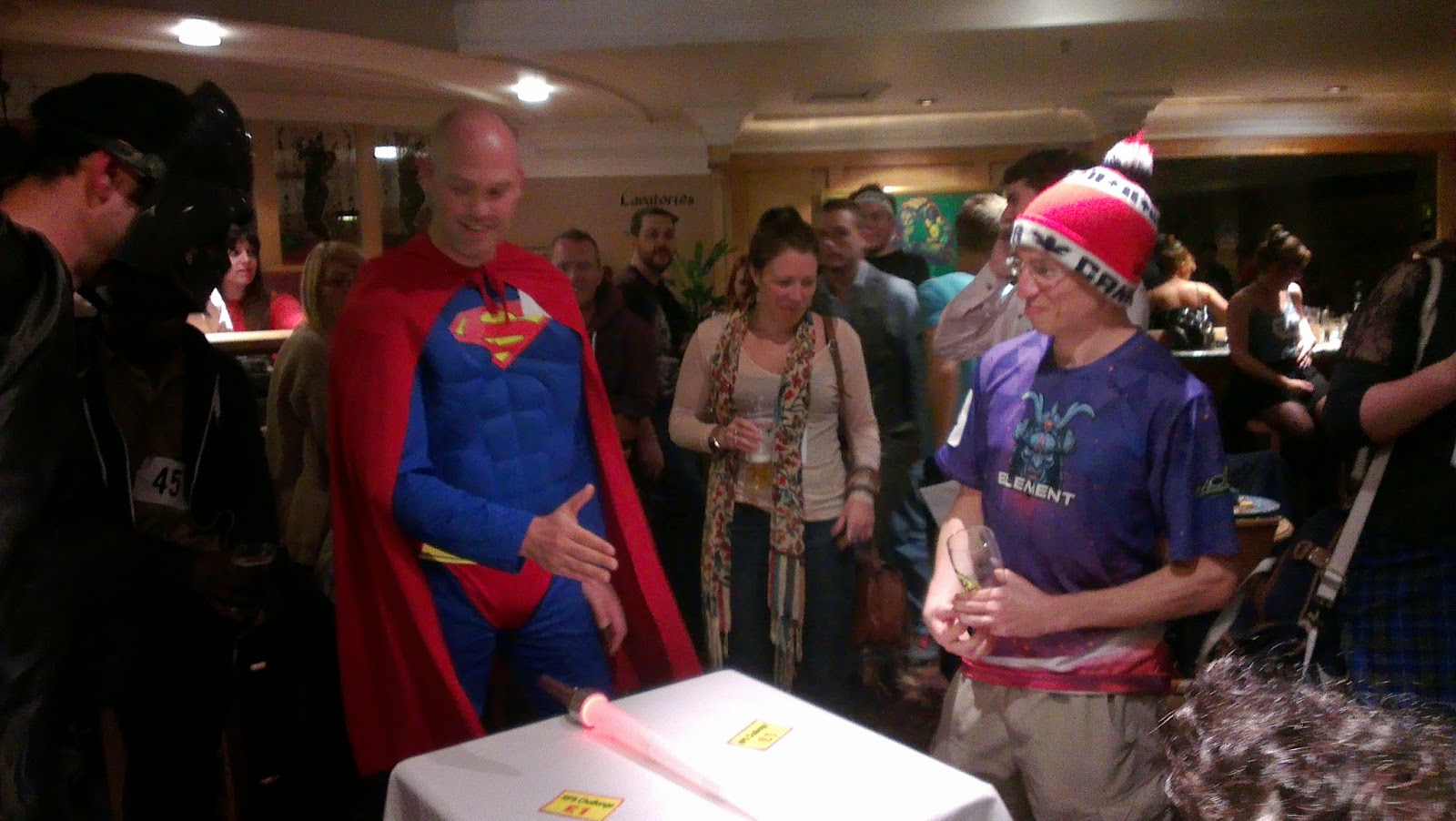 As if to prove what a good time I had, I had this much fun and only had ONE glass of wine the whole time! The rest of my enjoyment was down to sheer entertainment.

To stave off any potential ennui amongst those unlucky ones who didn’t get past the first or second round, the organisers added in a couple of extra elements. In between rounds 2 and 3 was the Losers Round where 8 losers were picked at random to play again and compete for some RPS challenge money. Oh yeah, the RPS Challenge. This is what happens while you’re waiting for the main event, or even, if you want, during the main event. Everyone gets $3 of this money, to gamble away on their games with other players in the room. The two people who amass the most of this challenge money at the end of the night then have an RPS playoff and the winner walks away with £25. 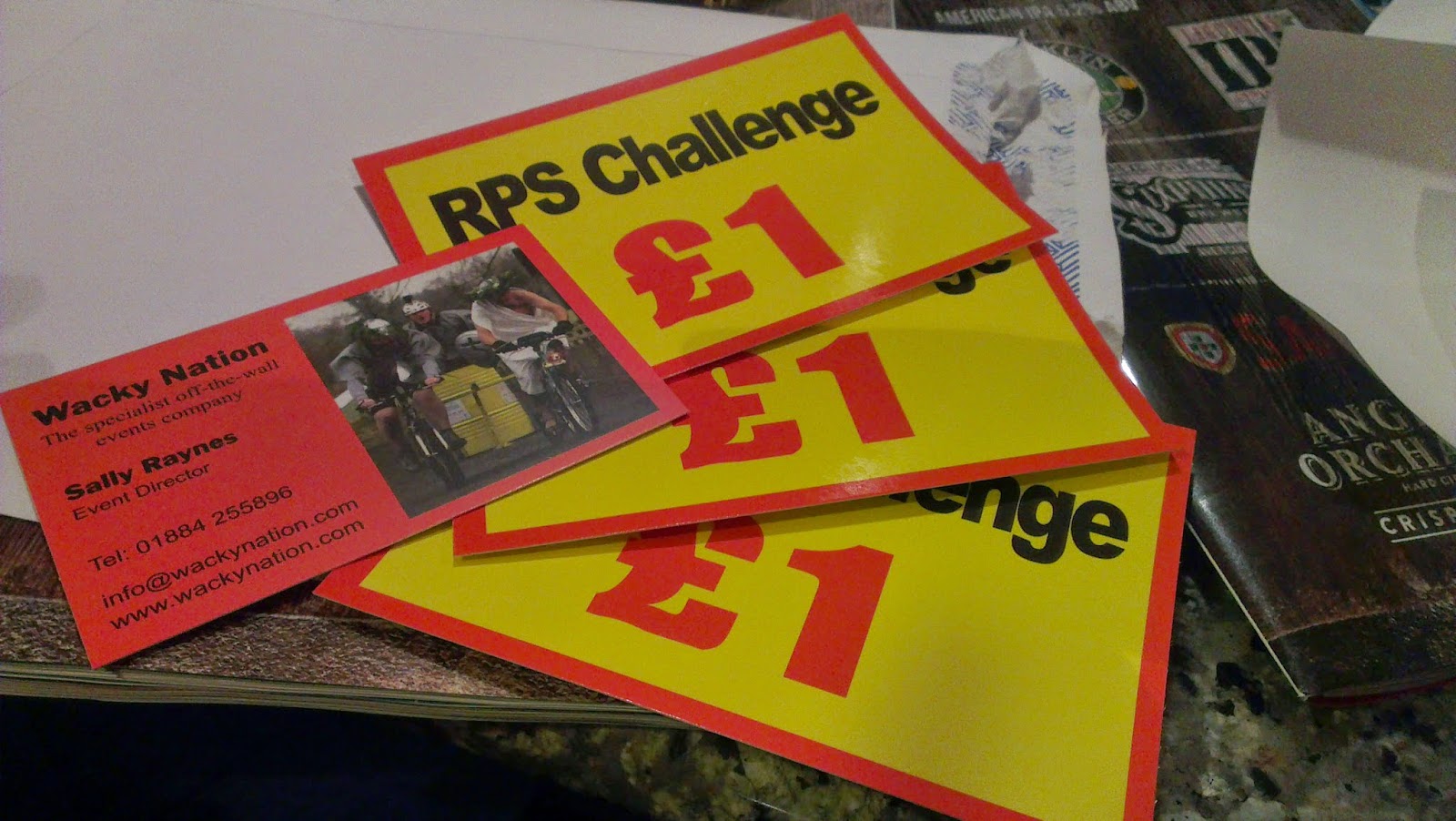 So there’s plenty to keep you busy and hold your attention through the event, if the main playoffs isn’t enough. But I think you’ll find it is. I was pretty much glued the main table. As the rounds wear on, you get to know the 'characters' of the competitors. You start picking people to root for, so you start to care about the outcomes. And even if you don’t, it’s just a lot of fun. And truly anyone can win the £100 Grand Prize. So what are you waiting for? Sign up for next year’s and get practising!

The FINAL in action - best of FIVE:

Posted by Ginglesnuff at 9:53 PM