After our lovely drink at The Discount Suit Co we went to the newly opened Culpeper (where the Princess Alice once was, on Commercial Street). Their USP is having a garden on the roof from which some of your dish might be made but other than that they’re basically a pub in the front and a gastropub in the back and I’d read really good things about the place.

For some reason it wasn't quite as satisfying as I'd hoped. Perhaps our choices didn’t give them a chance to show off their flair, but when it came to choosing, there weren’t that many items on the menu I was particularly taken with. Fish and chips seemed a little too boring (and didn’t look anything special when I saw someone get them). The pie looked quite good but I don’t like mushrooms, and it was one of those where you only get a pie topping, not the whole pastry shebang. I don’t like sardines. And I don’t really like mustard either but I thought ‘how mustardy can they really make potatoes?’ so ordered the pork chop. Stephen had the sardines. 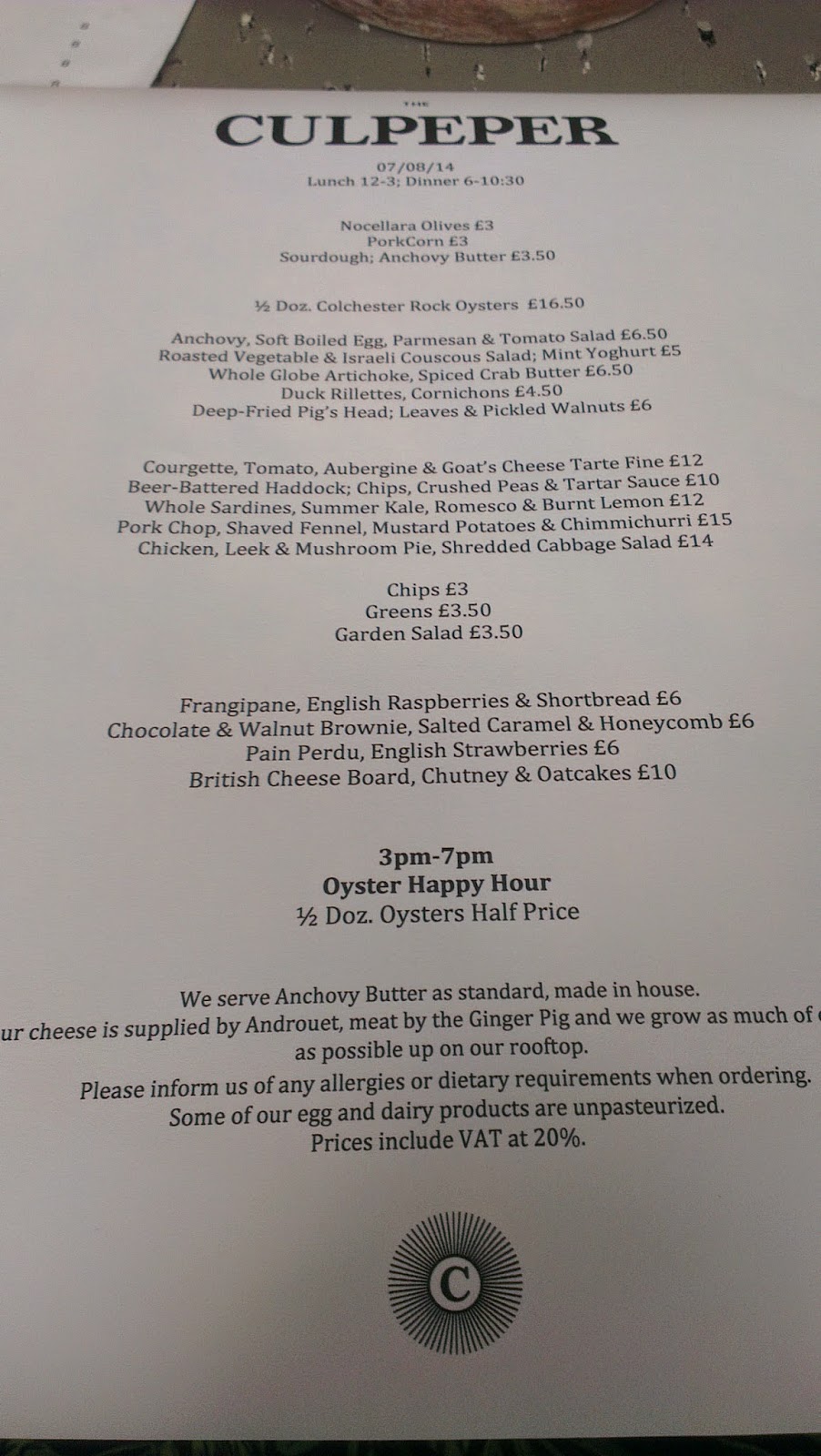 To start we got some of the porkcorn. This was good if slightly chewy but basically just tasted of pork scratchings. I'd like to fool myself that it was healthier than actual pork scratchings though. 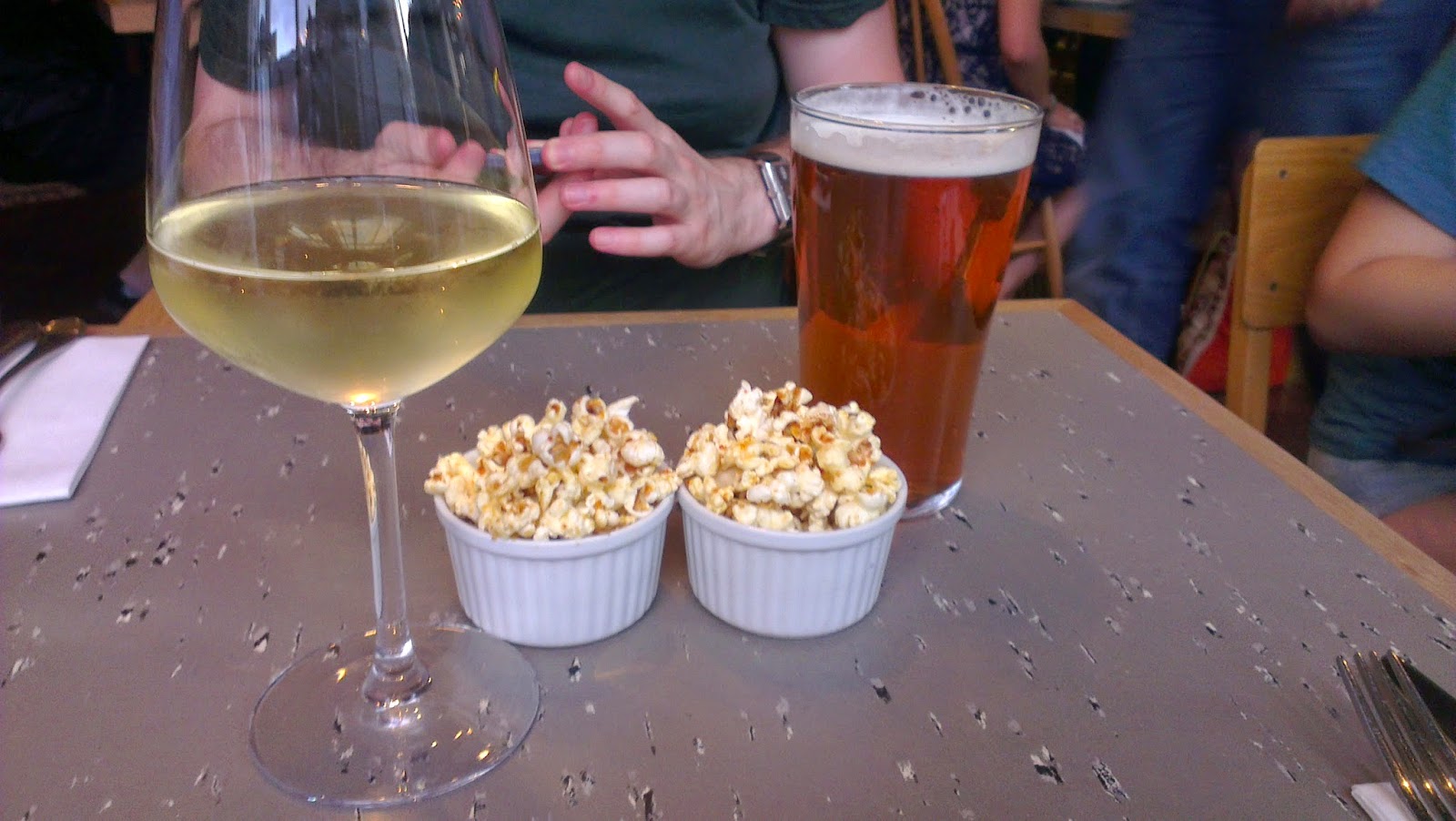 Stephen got the anchovy salad and I had the artichoke with crab butter because it sounded the most interesting.This dish is not made for one person to eat. It is basically liquefied butter with crab meat in it and is one of the richest things I’ve ever eaten. It tastes good with the artichoke leaves but they don’t provide enough ballast to counter the grease and I began to feel a bit queasy as I neared the end. I more than encouraged Stephen to tuck in and have his fill as well. What we really could have done with was some house bread to dip in it, and fill my stomach so that all that butter wasn't sloshing around in there - but if I wanted bread I had to pay for it. Why don't we get free bread anymore? When did it become a 'starter' or part of a 'cover charge'? It's only flour and water. (Ok, ok, oftentimes a sourdough starter as well.) I feel this is stingy on the part of restaurants these days. While I’m at it, I kind of feel the porkcorn could have been a freebie too – such gestures are appreciated! 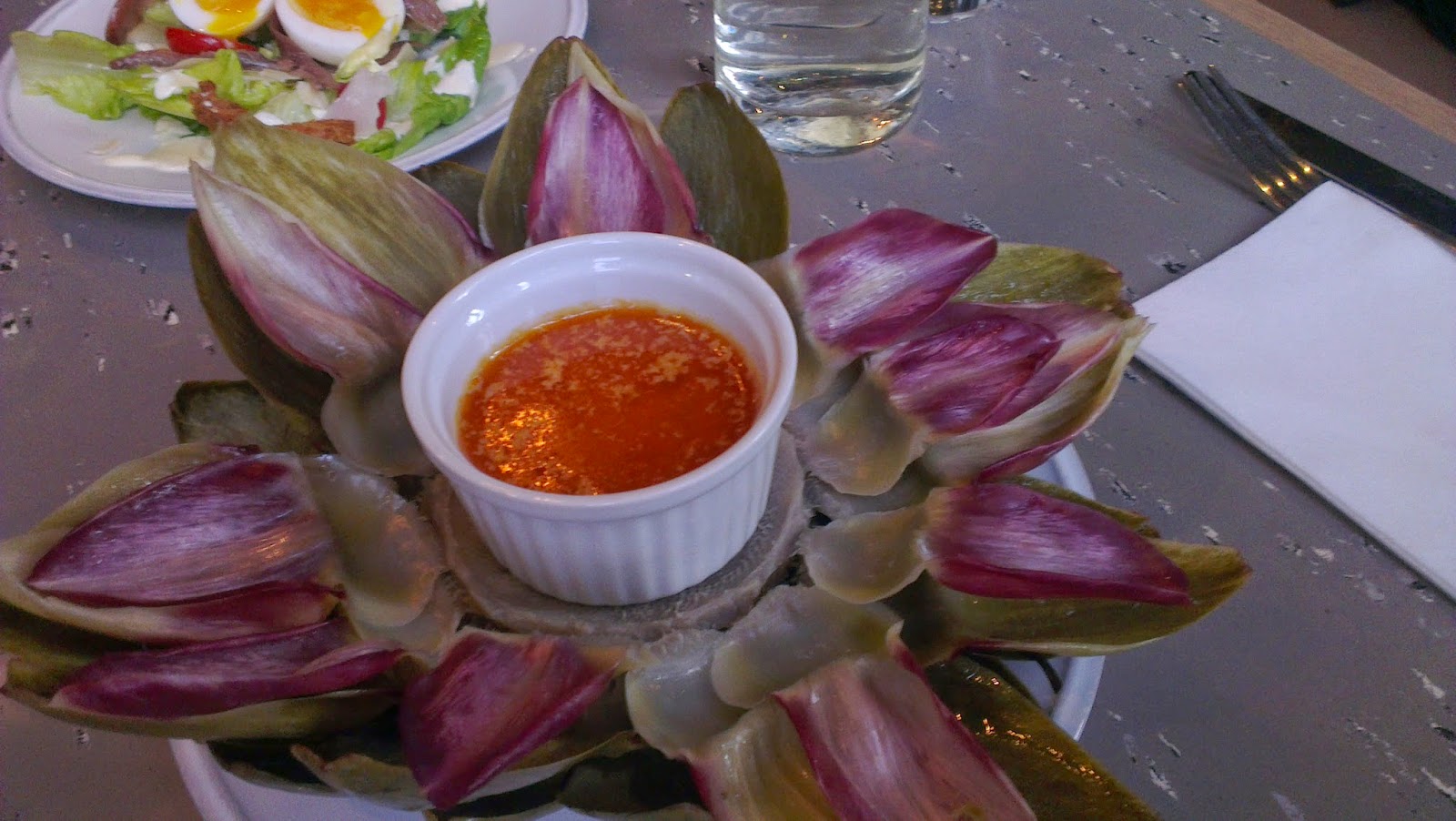 Anyway, Stephen was more than happy to give me a hand with this as his was a little underwhelming. He described it as a caesar salad without the good bits. I’m sure that all the ingredients were of the highest quality and fresh as a daisy, but I guess we’re just the kind of people for whom quality isn’t the thing that makes you say ‘wow’ when you’re eating a salad (unlike a steak, say, where quality is everything) - we want some more interesting ingredients as well. 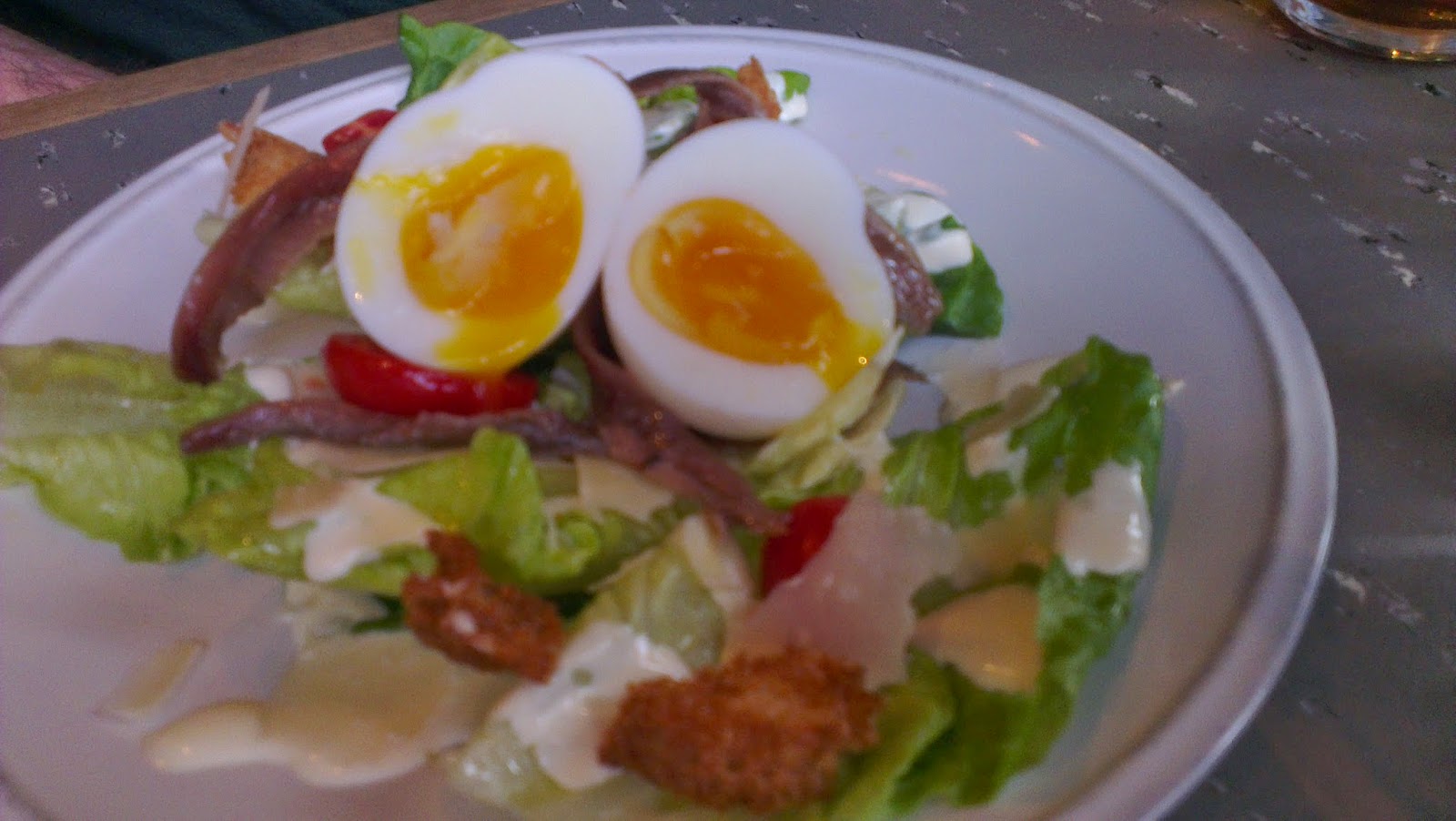 So, our mains. My pork was cooked to almost rare in some places, which was a touch underdone for my liking. I know the trend is to cook it pink these days, and I’m pretty okay with that, but towards the bone it seemed to get a bit mushy and hard to cut and it didn't look that appetising. I am happy to report I didn’t suffer any side effects from this though! The potatoes were pretty full-on when it came to the mustard. They were thickly coated in a mustard sauce, rather than a mustardy vinaigrette as I’d expected. I could bear with them with the rest of the meal but couldn’t eat any of it on its on its own. Even Stephen, who loves mustard found them a tad overwhelming. 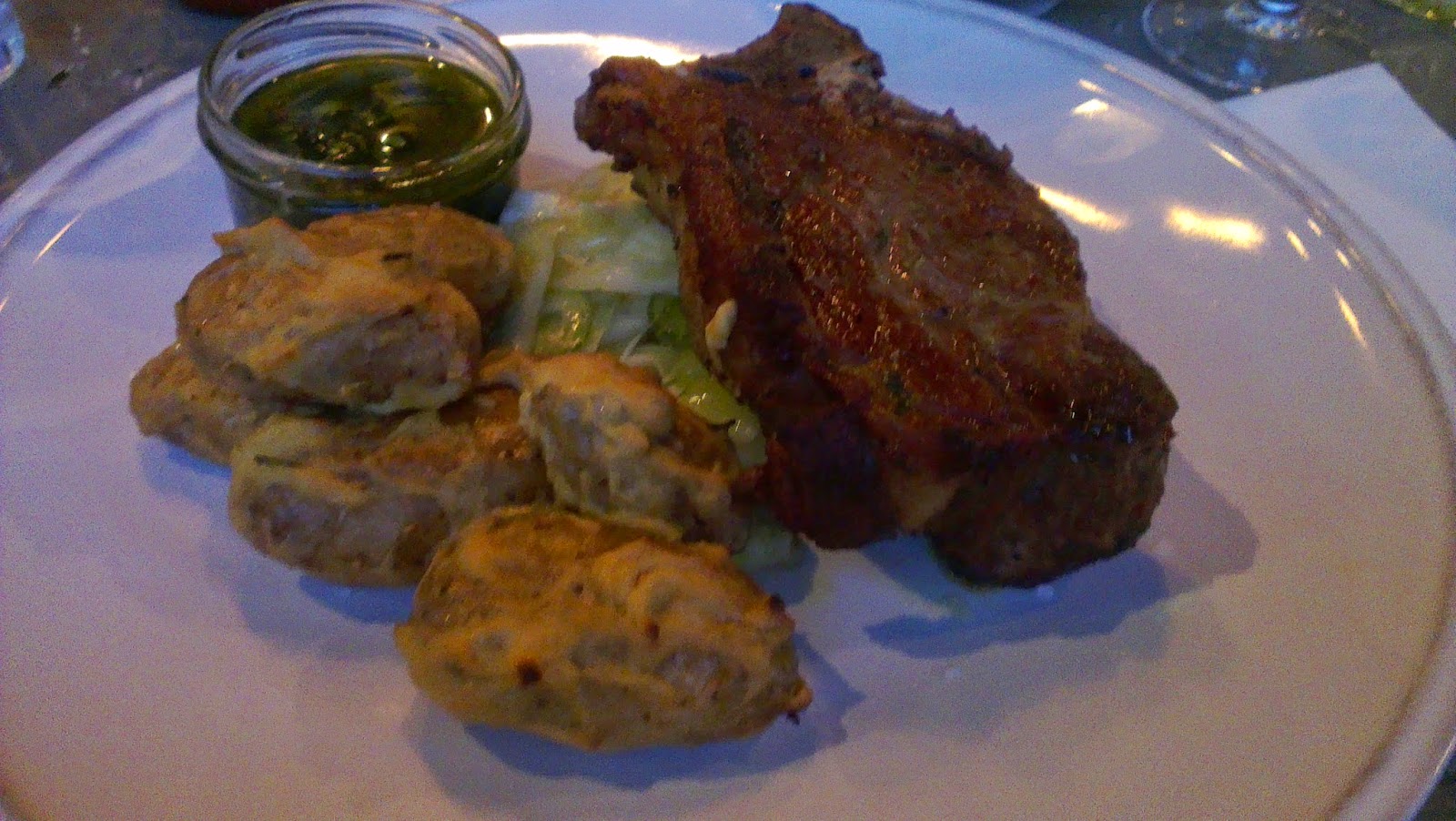 Stephen’s sardines were fresh and cheeky-looking. But, in a similar vein to the pork, they were a little underdone - there was some blood towards the spine, and apparently one or two of them didn't seem to be properly gutted. He also didn't like the romesco it came with, which he thought was too sweet but I thought it was really good and kept nicking it to dilute the mustardiness of my potatoes. He got some chips on the side and of course I had to have one or two but I can't remember much about them. They definitely weren't bad but they weren't stand-out either. We weren't even tempted to have a dessert, instead deciding to head over to the Peg and Patrio to finish the night.

I've been back to the Culpeper since for a drink mid-week and enjoyed the light and airy space, with only a few people having a quiet drink. This in contrast to the Thursday evening we went when it was so busy, with people dribbling out to the pavement outside, that we were quite lucky to get a table (it doesn't take reservations). It doesn't exactly feel like a proper (read - old man's) pub, but nor does it seem to be just a restaurant with a bar attached. It's two very separate spaces and I would happily go back to share another bottle sitting in the window, but am in no hurry to get back to the other side for food.

Find restaurant information on Zomato
Posted by Ginglesnuff at 9:52 AM