I love being part of the Zomato community. Not only do they do great blogger events, they’re not shy about giving away prizes. Just recently I won Foodie of the month and a £75 voucher for Ink, a restaurant I already had on my List. It is fairly new and has opened up about 15 minutes by foot from my flat. It looked modern European and definitely a cut above anything else we have in the area (mainly chicken shops and kebabs, so not difficult).

Our host for the evening (whose name I didn’t catch) was friendly and charming and also a little silly which is always welcome. He was very good at being there when we needed him but also disappearing when we wanted some time to think over our choices. 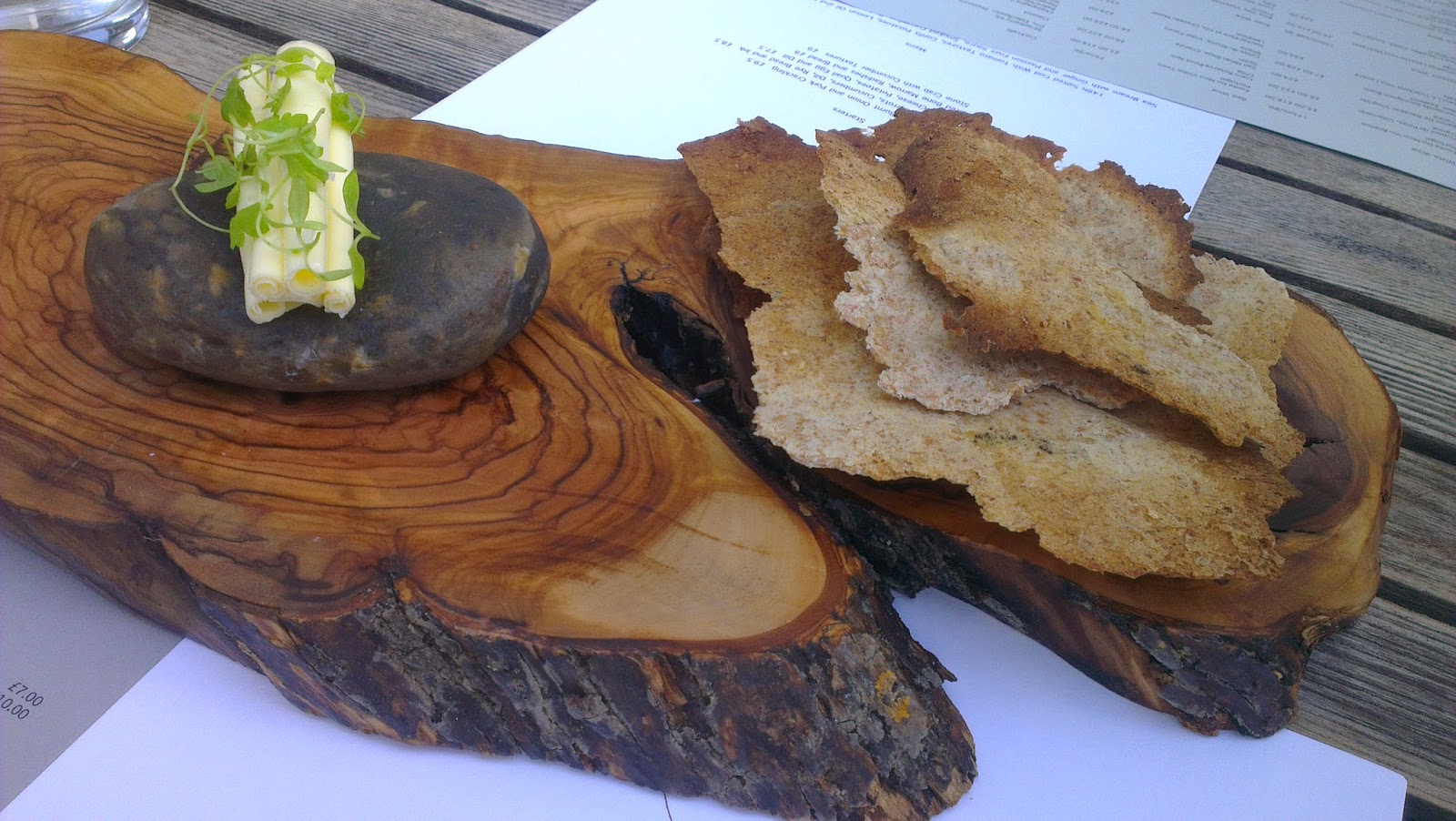 £75 may sound like a lot, but at Ink it doesn’t stretch very far. However, as it was somewhere I’d wanted to go anyway, we didn’t mind putting in some of our own cash to make the most of the dinner. So we had a cocktail each to start – a whisky sour for Stephen, a classic champagne cocktail (suggested by our host) for me. It could have been a little colder but I liked the sweet/bitter taste. My other drink for the night was a robust picpoul while Stephen stuck with the sours.

The chef is a great fan of ‘textures’ – the word festooned the menu. And of course ink featured – once in the starters and once in the mains in the restaurant’s signature dishes. Burnt onions were also conspicuous.

Choosing was an enjoyable hardship. I got the scallops with peach puree, with pork scratchings crumbled over them and burnt onions. Two fat scallops were perfectly cooked and the other flavours were exquisite. The scallops were so soft that I really appreciated the extra texture (there’s that word again) from the crunchy scratchings. 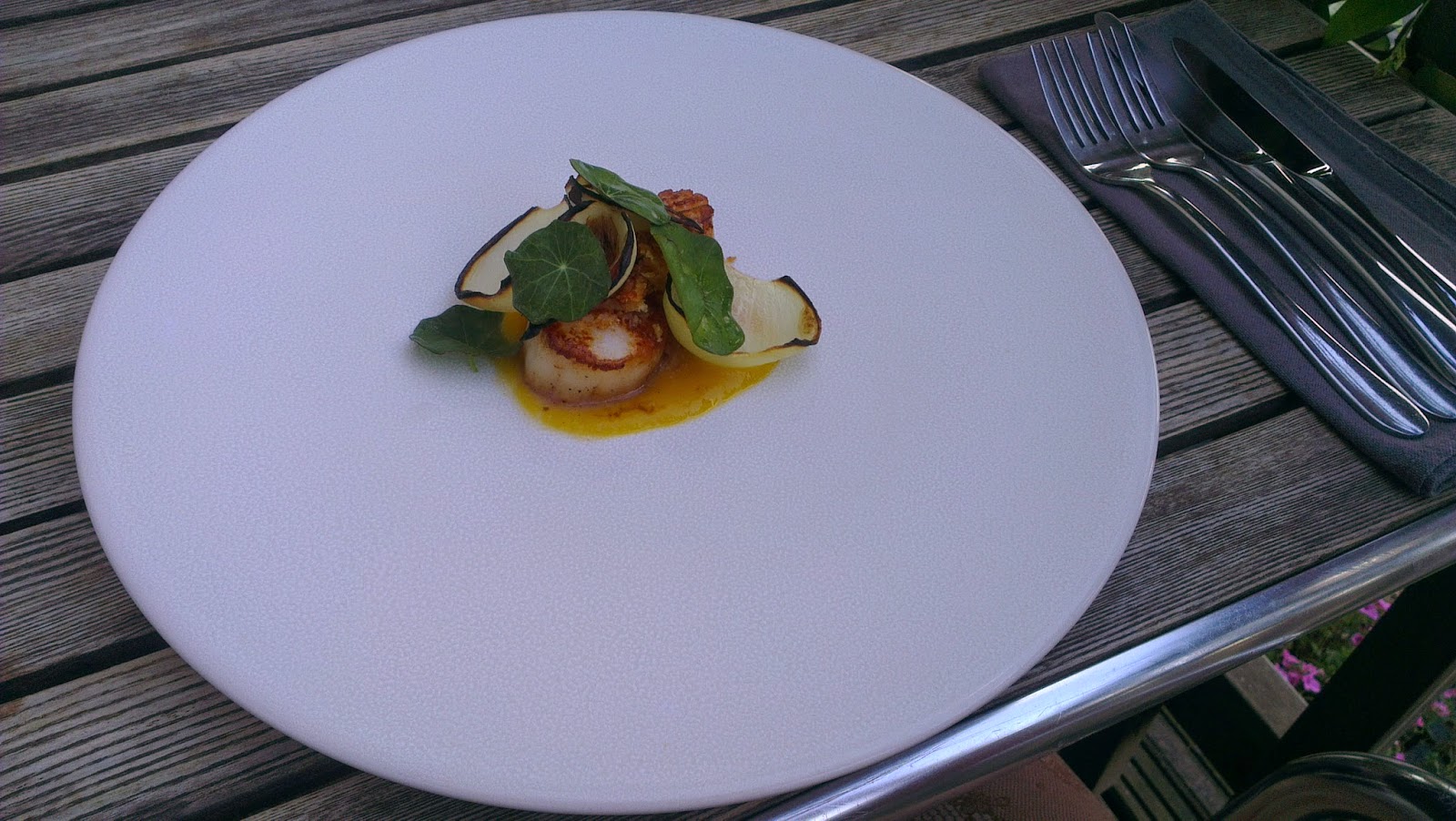 Stephen had finally decided he wanted the bone marrow and then we were told it wasn’t on the menu for the night. He quickly chose the stone crab with textures of cucumber. Cucumber isn’t something he usually likes but it was done in such a way that he was happy to eat it. Flakes of potent crab sat on a sharp cucumber jelly and pickled cucumber, providing a punchy gherkin tang. 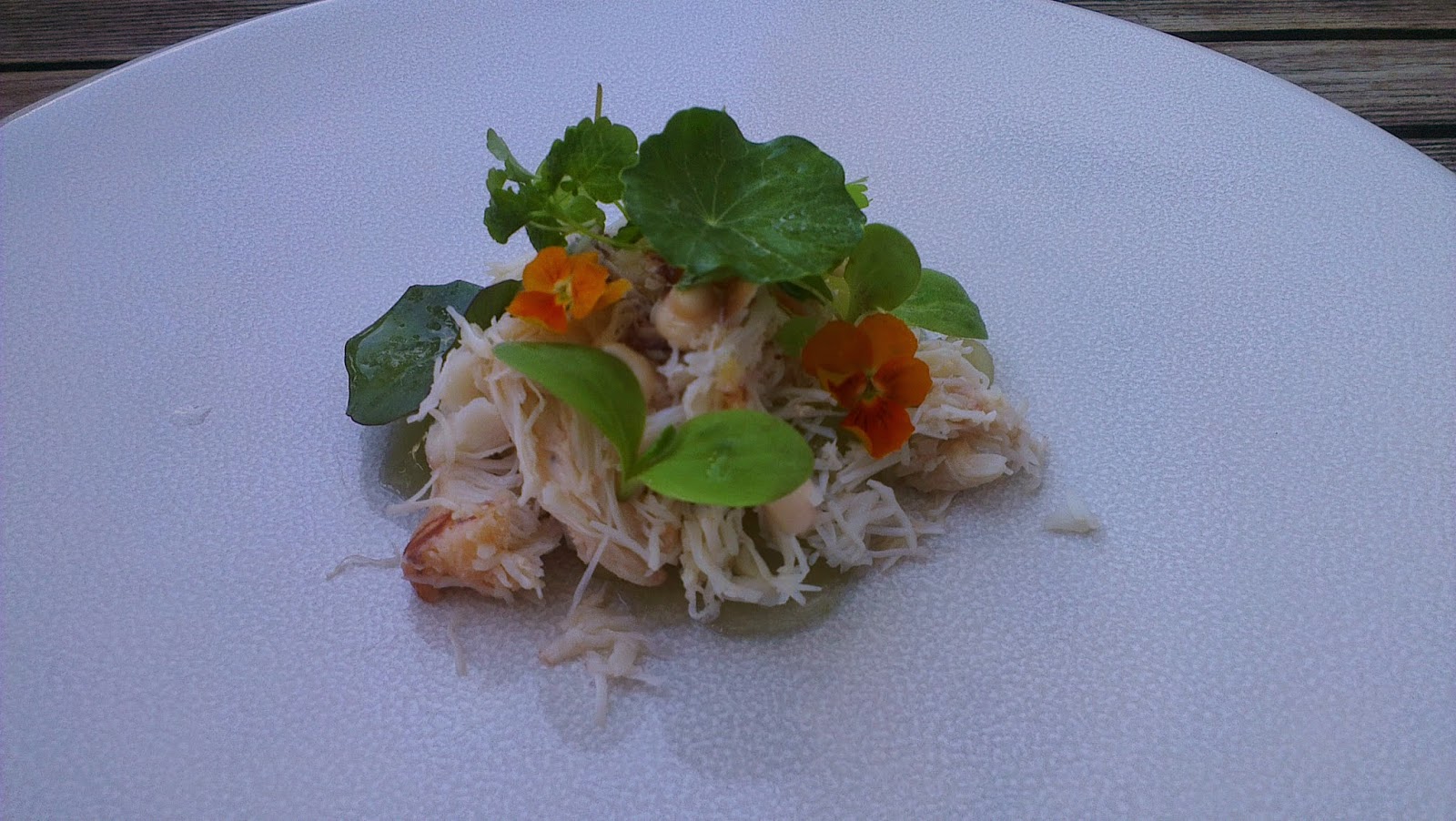 For our mains I had the signature dish of salted cod with textures of tomato, ink soil and confit potatoes. The textures in this case were confit tomato (scraped of their annoying sludgy insides), a tomato puree that tasted like tomato soup (a good thing) and crunchy, tangy tomato salsa. On the side were the spheres of potato confit and there was also a light lemon oil that was startlingly good on the tongue. Before I ordered it, I was warned – it was very salty. And it really was. For the most part, the rest of the dish balanced out the salt, but by the end of it the salt was rather overwhelming. I’m not the biggest fan of salty things in the first place! But the salt had done its job – the fish was nice and firm. 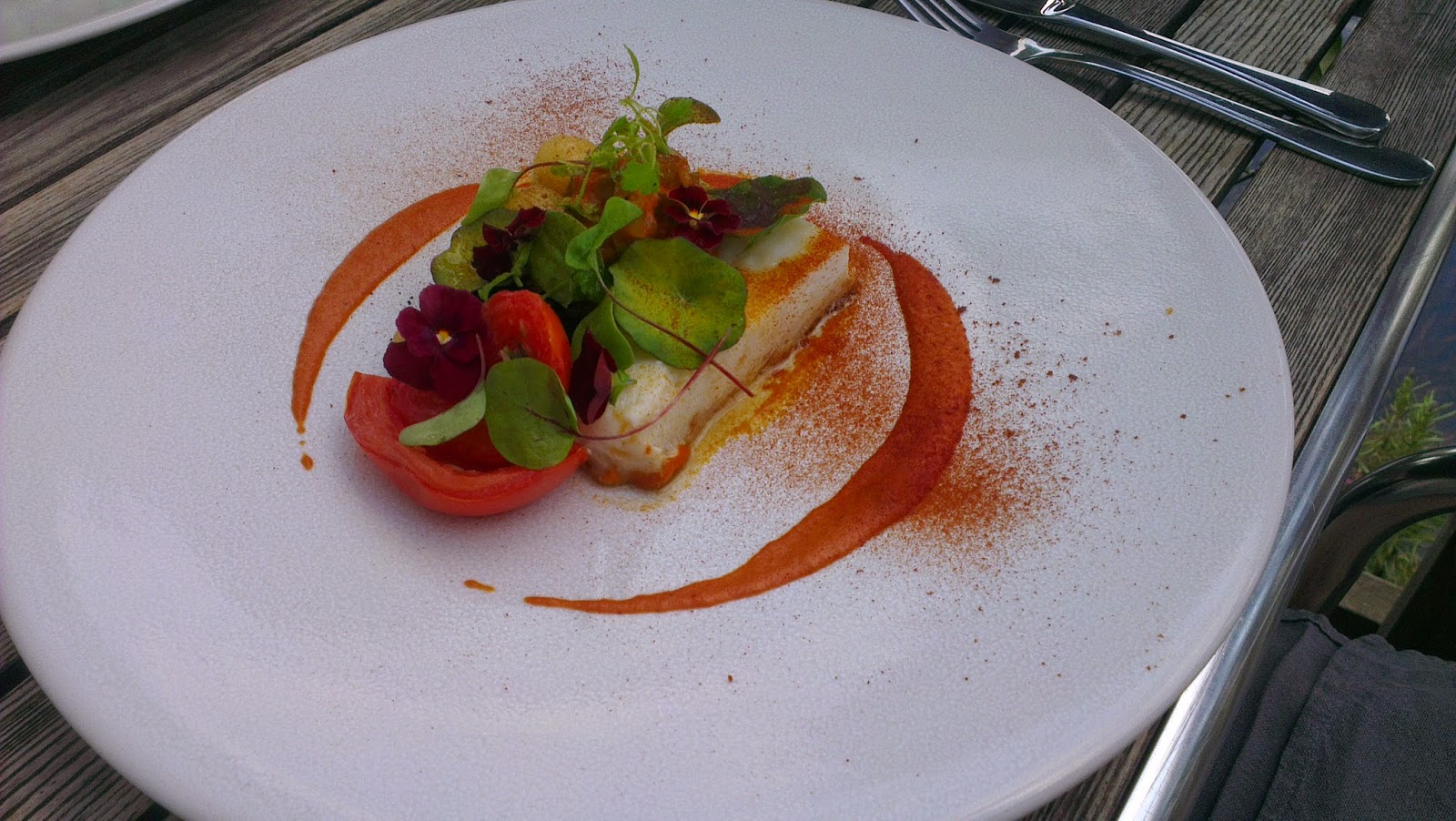 Then, Stephen made a mistake. He didn’t order a dish which had the word ‘textures’ in it. Instead he got the braised beef with peas, broad beans and potatoes. Apparently this beef had been braised for three days but it was surprisingly dry and solid. For that length of cooking the meat should have fallen apart merely under a stern glare. The potatoes were strangely delicious though – a slight crispiness to them. We had already decided not to have dessert because we’d both eaten bad stuff earlier (me my Crosstown Doughnut) but we couldn’t say no. So we got one to share. Our choices were basically textures of chocolate or textures of vanilla. We got the chocolate. Always a risky choice for presentation but they did quite well, creating bit of a woodland tableau with the two types of chocolate, the chocolate soil (reminding Stephen of chock-lick and consisting of chocolate and hazelnut puffed crumbs) and the pretty mint leaves and flowers (a bit of a theme). 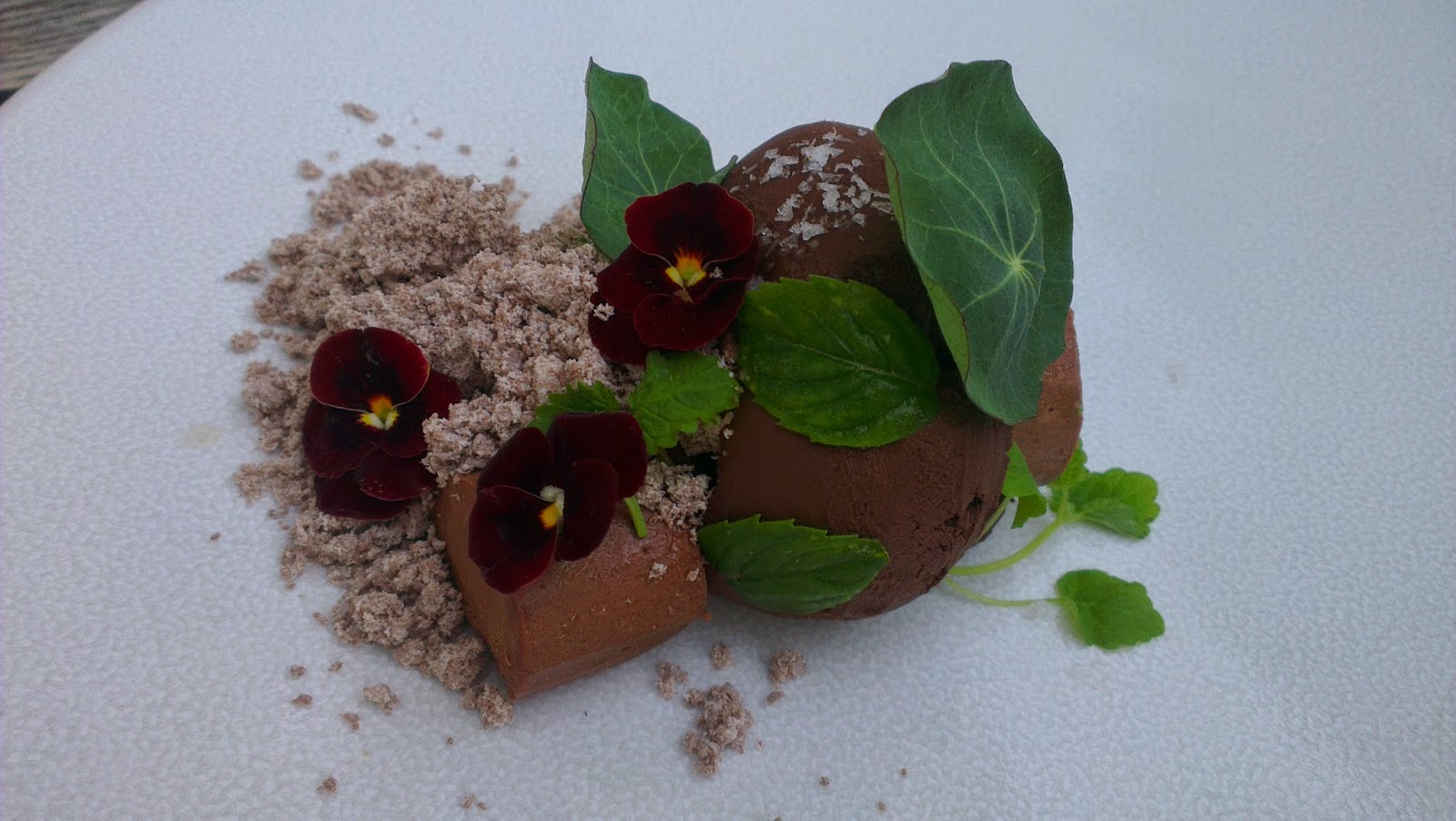 You can’t go wrong with what is basically pure chocolate and this dessert did well enough to almost make Stephen forgive them his main, although I think I would have enjoyed something a little lighter, or with yet another texture to it (namely cake).

Ink is certainly ambitious, perhaps a little too much so. While I welcome having a good restaurant in the neighbourhood I would welcome one even more that I didn’t feel I had to wait for a special occasion to visit. Despite the beauty of the dishes, Ink was just a touch too expensive, and the dishes a tad too small to win my frequent attendance. If they could shave a couple of quid off the starters and/or make the mains big enough that you could come for just a main and leave feeling sated, I think they’d be on to a winner. As it is, they’re not in a well-trod area and they’re not quite spectacular enough to be a ‘destination restaurant’. I'm not confident that many people who might not otherwise have gone to Mile End will venture here for Ink. And the lack of diners when we were there would back this up, even if it was just a Tuesday. There were only four other covers the whole time we were there and despite the easy listening background music and the canalside setting, it was rather too quiet for my liking. 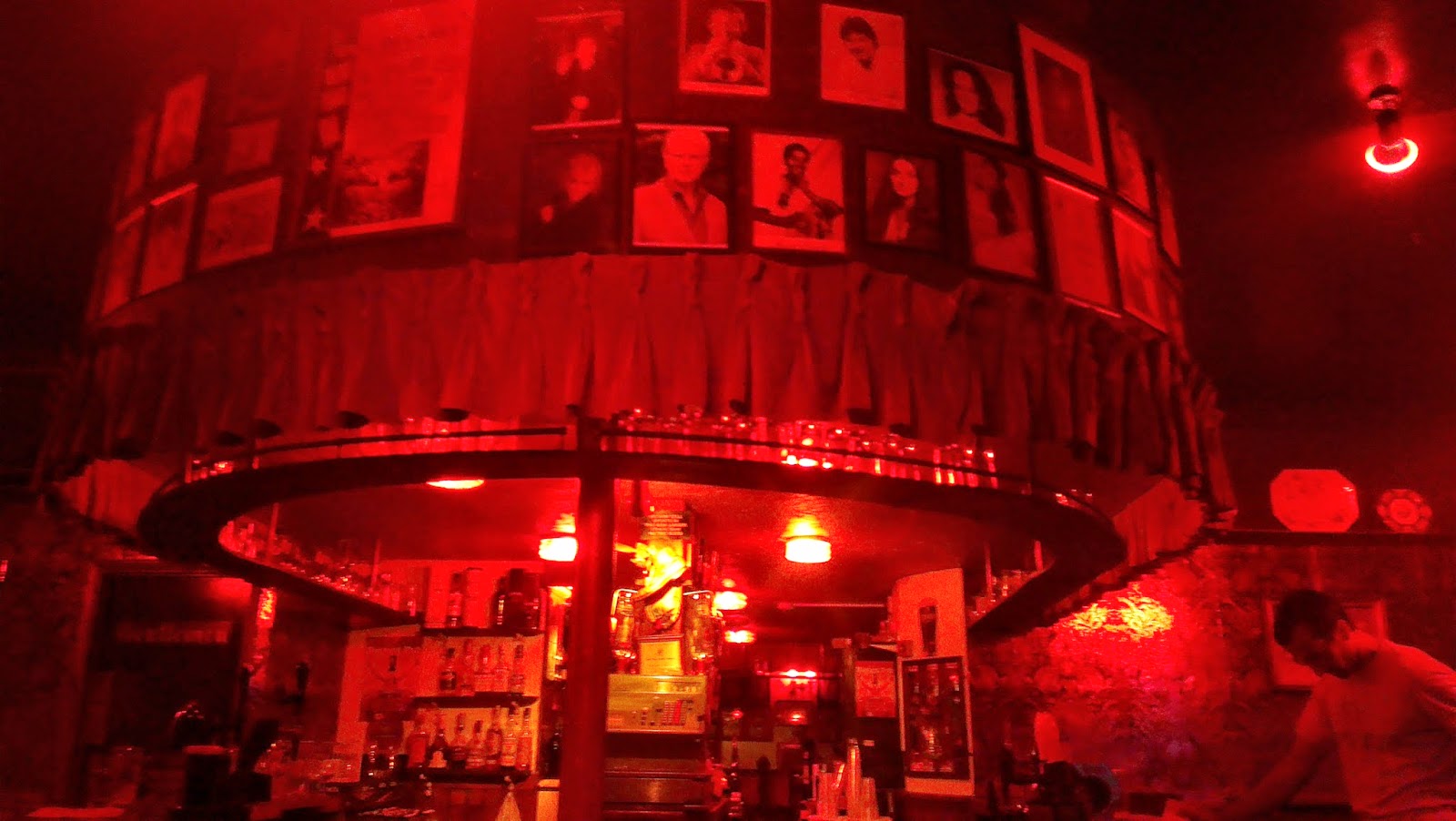 When I first moved to Mile End, my friend gushed to me about The Palm Tree and how lovely it was to sit outside by the canal. I’d only managed to get there once before, after Field Day when it was absolutely packed and far too late and cold to be sitting outside. It happens to be practically opposite Ink, so we thought we’d go along for a drink after our meal. Of course, by this time, even though the day had been bright and hot, it was starting to get a chill in the air and we didn’t want to sit outside anymore. But that was fine, for the inside has a charm all of its own. There is something Victorian about it, with chandeliers sending out eerie gloomy light over the china on the walls. The circular bar juts out into the rest of the room, turning it into a centrepiece. The red lighting brought to mind David Lynchian dream sequences. It doesn’t have a huge selection of beers but it’s reasonably priced – a wine and beer came to just over £8. A hidden gem.

Posted by Ginglesnuff at 1:48 PM