Far Rockaway is a riot of colour and art. Every surface is covered in it, even the support structures and pillars and bathroom walls! It’s loud and it’s fun and I liked it straight away. 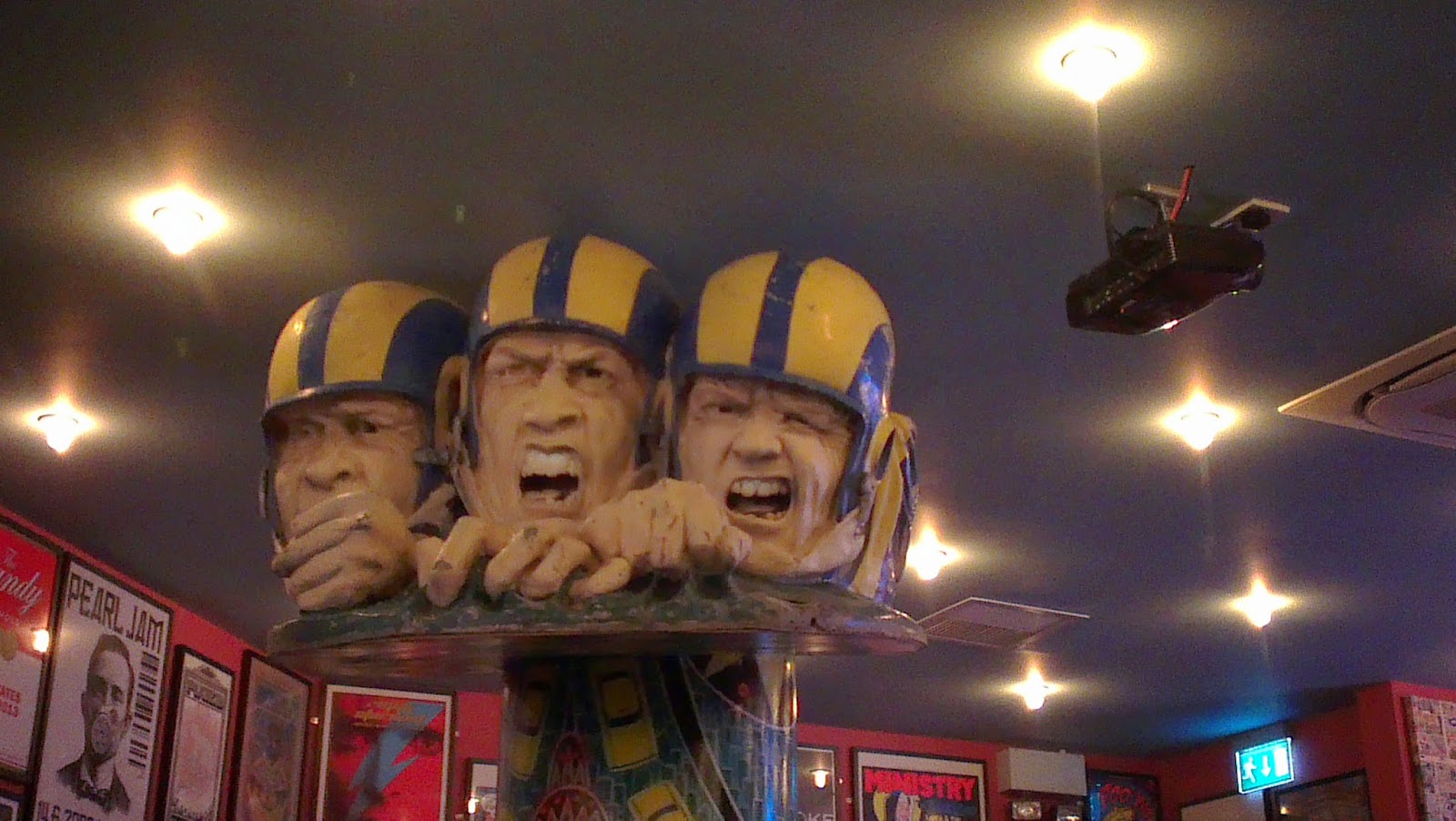 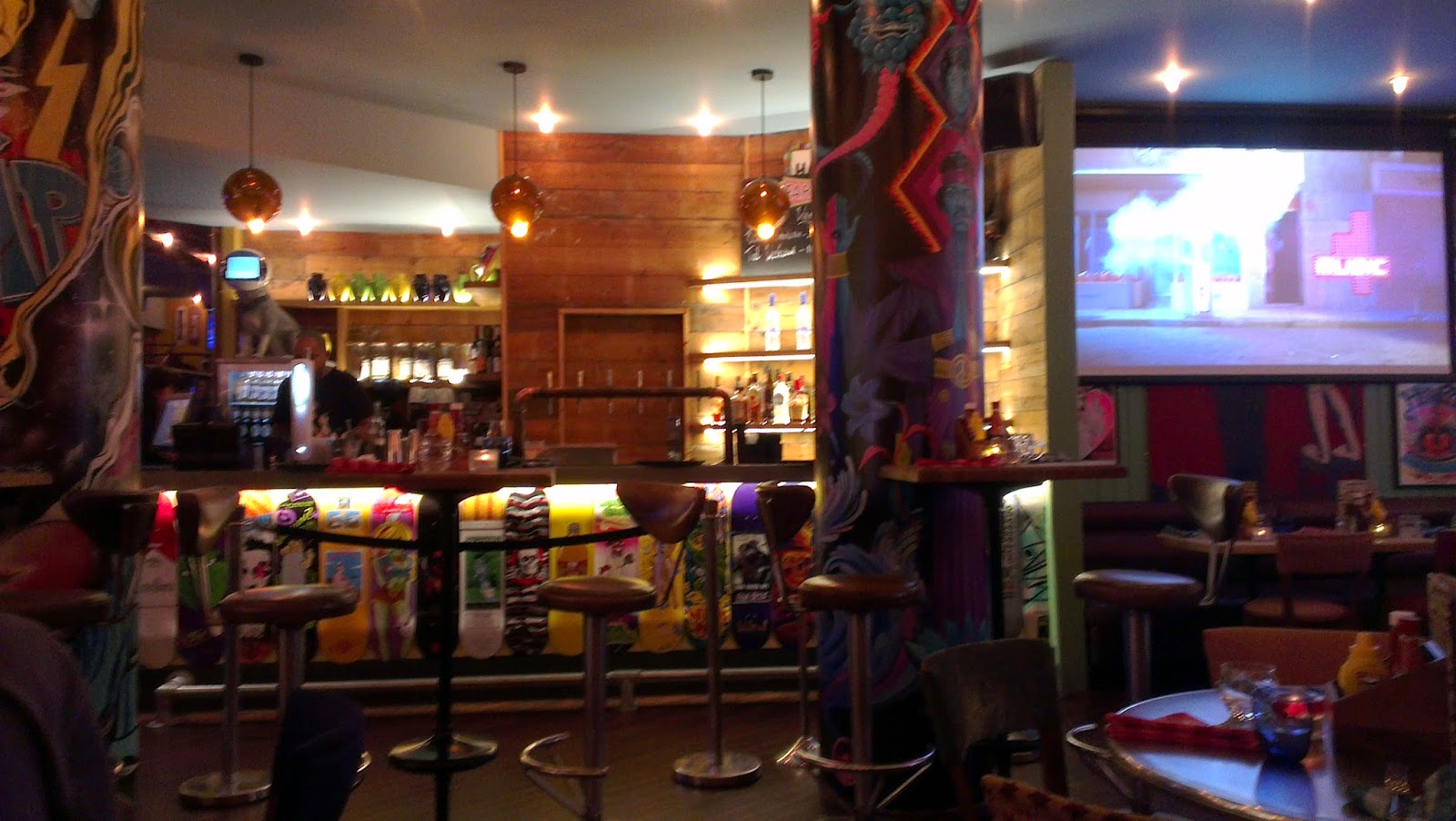 I had been invited to come down and review a meal. I’d seen a few comments and knew they did big, American-style pizzas and wanted to compare them to the other scant offerings in London. I didn’t have very high hopes, expecting another quantity over quality affair a la Earlham Street Clubhouse. 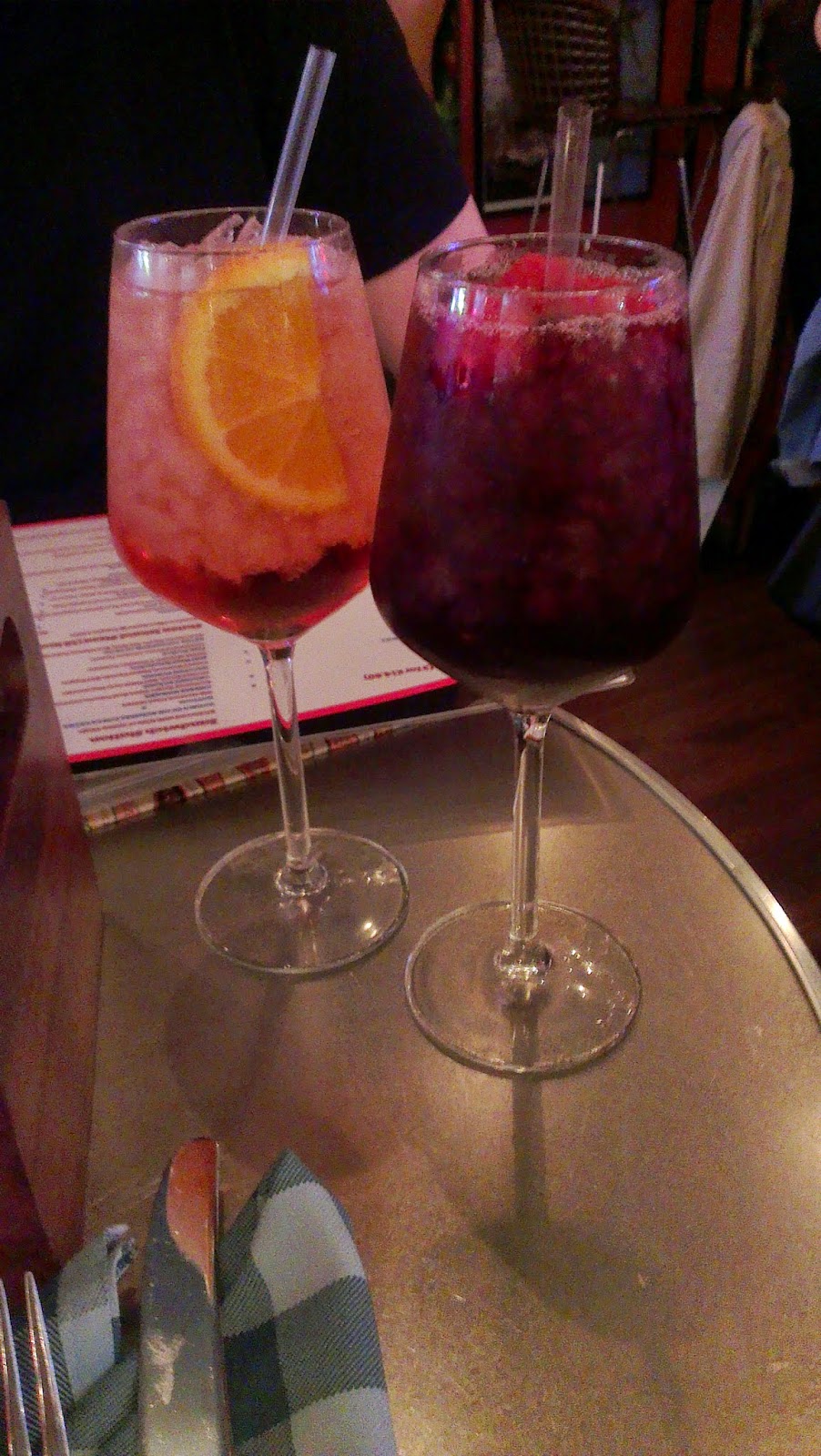 As for the other food, I strongly suspected that, for the type of American diner stuff they were offering, you could get it better elsewhere (thinking Red Dog, Orange Buffalo etc). But I am always willing to be convinced otherwise.


I got there at about 7:30, and while waiting for Stephen to arrive ordered us a couple of wine cocktails on tap. Being as I didn’t actually see the cocktails poured, the novelty was rather lost, but they were a pleasant enough, summery drink, nothing particularly special about them.

I already had an idea of what I wanted to try – I haven't seen a mac n cheese spring roll on anywhere else's menu so we had to get one of those. And Stephen wanted some wings to start. And then, we just had to share one of the 18-inch pizzas, choosing the 'Garbage Pie'. A very unattractive name belies a rather grown-up sounding pizza - pancetta, USA sausage and artichoke.

The table looked like it was (and indeed turned out to be) only just big enough to hold said pizza, so we got our wings and spring roll to come out beforehand.

The wings were ok - a little spicy, kinda on the small side, not much meat to them, a touch of sweetness. I ate them quite happily but knew they weren't a patch on others I'd had elsewhere. The mac n cheese spring roll however, was rather delish. It was more like a big mozzarella stick - the cheese inside all stringy and gooey rather than runny. I dread to think how bad that was for you. 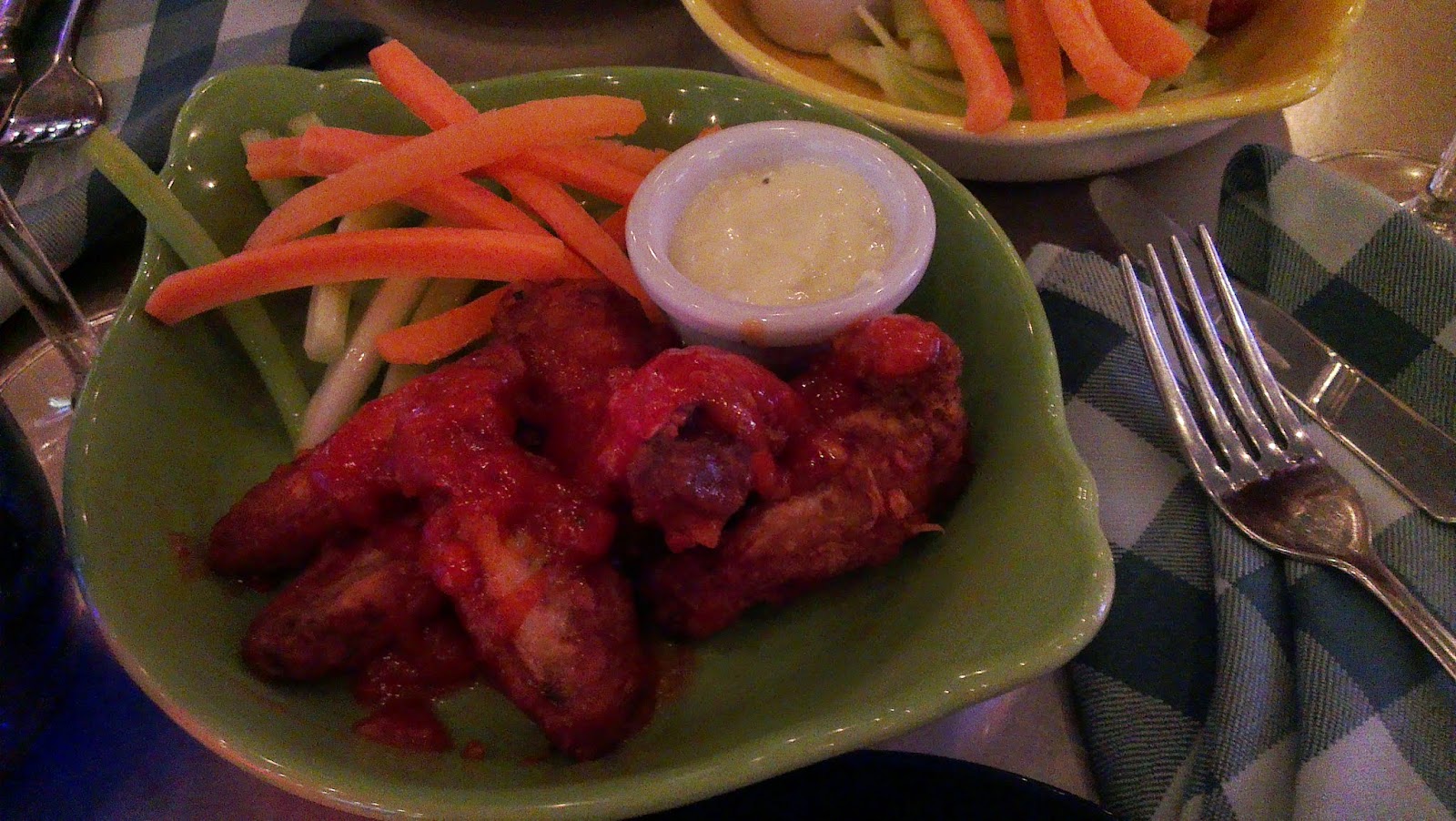 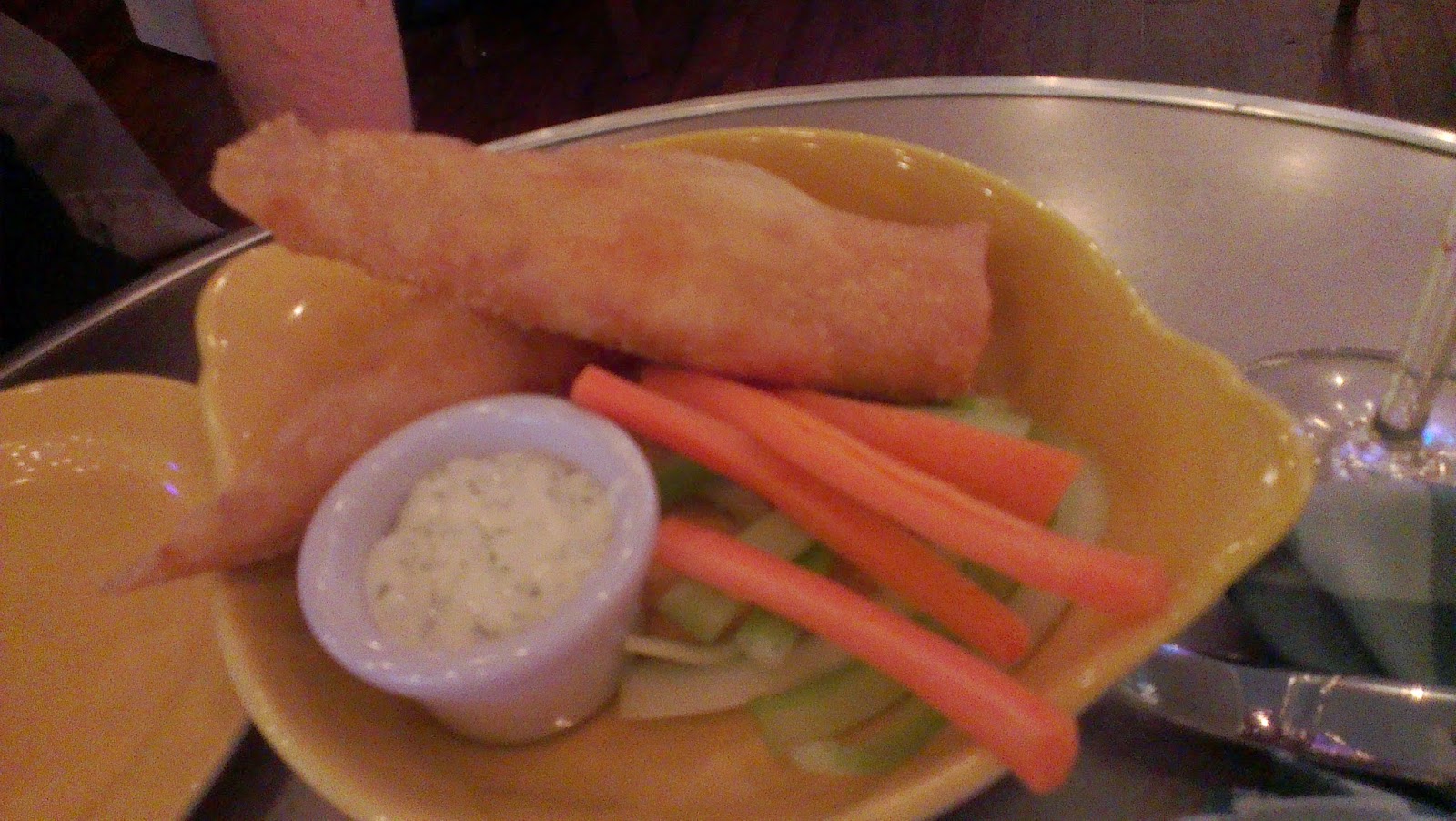 Both plates came with some side crudites and a dip, but we didn't even get a chance to pretend we were going to eat them – as soon as we'd finished the main event, our plates were whisked away. Probably no one does bother with the veggies, in which case it seems a shame to waste them as mere decoration on the plate.

Soon after that came our pizza. Set up high, with room for chilli oil, parmesan and chilli flakes underneath, this certainly looked the real deal. And honestly, it tasted as close to it as I reckon you're ever going to get over here. A crispy, thin base, lots of cheese, and toppings that each had a really good flavour of their own made a bit of a masterpiece altogether. I was so surprised! The sausage was garlicky, the artichoke was beautiful – possibly marinated in lemon. And, crucially, after the equivalent of two US slices of the pizza, I was pretty stuffed. However, we were going for a few drinks after and I couldn't bear this pie going to waste, so I forced in a fourth, feeling proud of myself for conquering half the pie, sipping red wine as I digested. They give thanks to two guys from NY on their menu, and these guys deserve thanks and praise indeed. 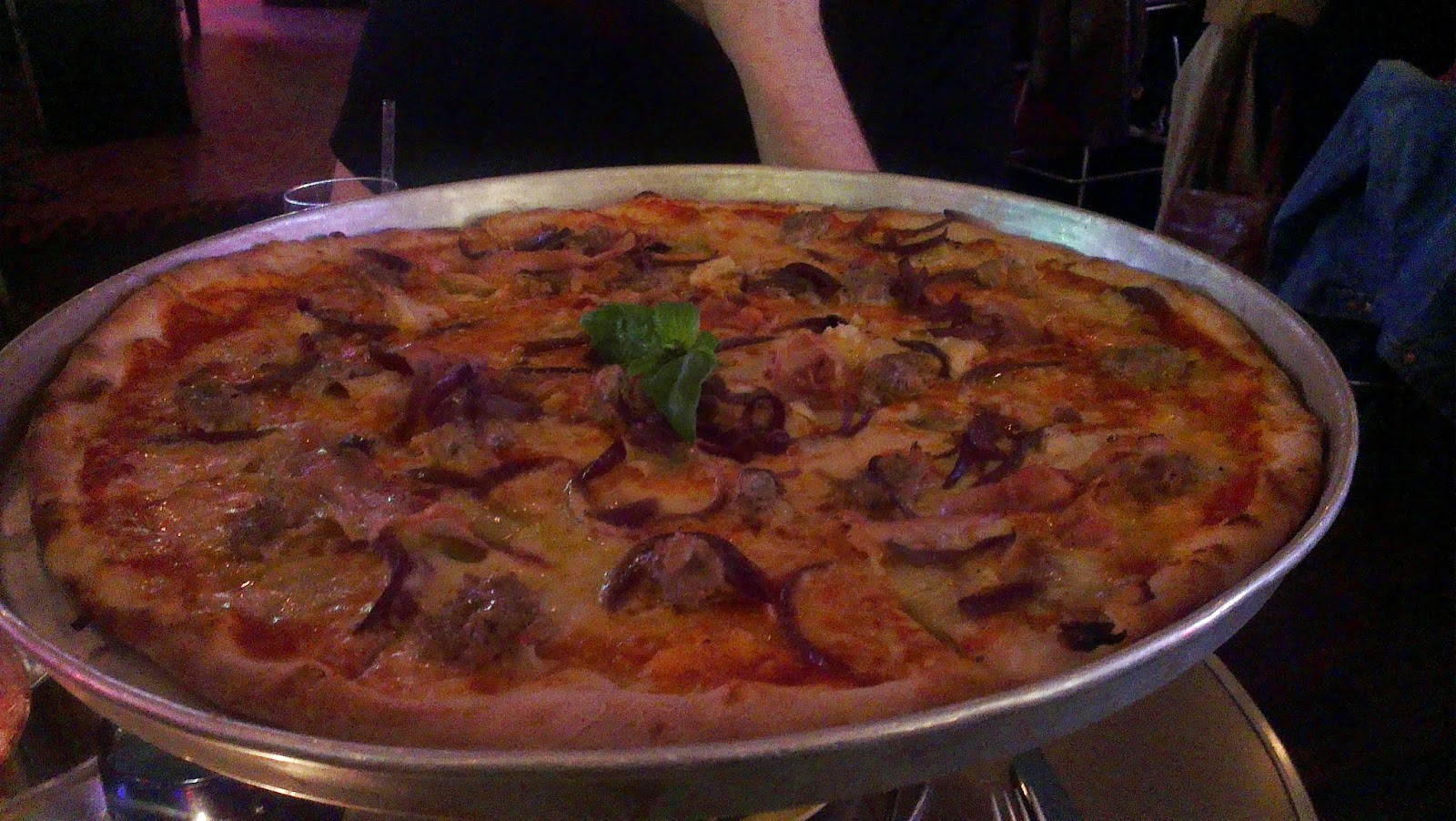 As we ate, we surveyed the other customers' food and saw quite a lot of burgers. I had no food envy – they didn't look particularly appealing. No, the pizza is where it's at here. I would be hard pressed to choose between Voodoo Ray's and this joint. So I won't. Voodoo Ray's has more adventurous toppings but I reckon Far Rockaway might just pip them in authenticity. Hats off to you!

I was way too full to contemplate dessert, or even one of their dessert cocktails, so I didn't get to judge the Mississippi Mud Pie I'd have gone for. But it won't be the last time I grab some pizza from here, I'm sure.

Posted by Ginglesnuff at 1:35 PM