I didn't really expect to be saying this but Ultimate Power Ballads was SO. MUCH. FUN!!! It managed to tap into my adolescent twin loves of being angsty and singing my heart out.

I had a little too much fun in fact as the night quickly descended into a heady haze (I'd been at a free bar before turning up) and so this is not the most comprehensive of posts.

It was only later I thought to look at my photos of the night and my memory was jogged - were there superheroes on the stage? Why? I do not know.

But what I remember, as I have iterated before, was very good. The night was dubbed Bat out of Helloween in honour of Halloween and lots of people were dressed for the occasion. If they weren't in ghostly guise then they had donned their 80s finest, and some had done a pretty good combination of the two. 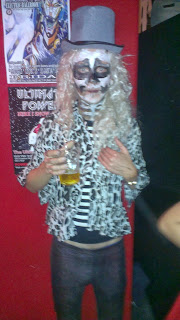 Mullets abounded: the perfect accompaniment to the inflatable guitars and microphones which are the essential accessory for a night such as this. Well, if you're going to be belting 'em out, you need a mic to sing into! 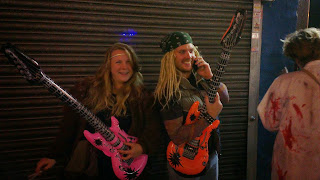 I wasn't sure about the whole concept before I got there but within five minutes they had played Mr. Big's 'To Be With You'  - one of the songs on a CD we had on repeat in my teens: The Best Rock Ballads in the World... Ever! and Def Leppard's 'When Love and Hate Collide', another song we were weirdly obsessed with back in the day, and I was smitten.

Add to this the fact that they played Whitney's 'I Have Nothing' over the more predictable 'I Will Always Love You' (and my own personal preference), and they cemented my fandom.

I must admit, there was a point where my enthusiasm waned a little - things did get a bit cheesy in the middle (yes, cheesier than the aforementioned) but they brought it back again with the likes of 'Drove All Night' by Cyndi Lauper and 'Think Twice' - allowing me to do my best 'singer in anguish' impressions.

I still maintain that being drunk is the optimal state to be in for such a night - you really need to let your inhibitions go as basically this is just one big singalong. I remember being on the dance floor, but you never do anything much more energetic than sway around a bit.

After confessing my enjoyment of this night, people are now trying to persuade me to go to Guilty Pleasures. But I worry that may be a step too far for me... what do you think?
Posted by Ginglesnuff at 7:06 PM