I tried to go to Porky's once before but was thwarted by its offputting group booking policy. Porky's is a no reservations place but if there are enough of you (there were about 12 of us) then you can book in advance. Besides having to put down a deposit you are also told that group bookings pay a set £17 per person and for that you can choose any main from the menu and any two sides. This sounded like a good deal so I agreed. But then I had a look at the menu. And discovered that Porky's is so cheap it is almost impossible to order a main and two sides and have it total £17. I queried them about this and they said that they picked that amount because some combinations would be more than £17, some less and so they averaged it out at £17. They didn't seem bothered that only about three items on the menu together would equate to more than £17. Quite a sweet little deal for them if people are lazy with their sums.

Unsurprisingly, everyone in my group thought the same way and so I cancelled the booking. It does seem a tad odd that when you are giving them guaranteed custom (and therefore money), they should implement a policy that could – for want of a better word – swindle the customer if they make the mistake of ordering based on preference rather than price.

It would have put me off Porky's entirely had it not already made its way onto my List, and the people I spoke to were actually very friendly and nice about the whole thing.

So I found myself in Camden the other Saturday after buying zombie makeup for my night out and thought we'd get an early dinner in there.

The menu is what you'd expect - pork ribs, pulled pork, half a chicken and a range of burgers, a couple of things to satisfy the pescetarians and vegetarians plus various sides, and also, as I said, pretty cheap. Very cheap in fact when you take into account the amount of food they give you. Stephen ordered the ribs (£9.50) and even after giving me one and a half, wasn't able to finish them all. Having said that, had they been a bit nicer, I daresay he would have forced it all down. 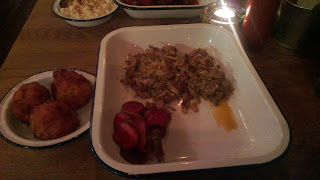 The downside of Porky's being so cheap seems to be that the quality suffers somewhat. My pulled pork (only £8.75) was smoky through and through, which was nice, but it seemed that all they had done was smoke it. No nice marinades or seasoning - just a load of smoky pork. The pork ribs were of quite a nice flavour - the BBQ sauce they came in was slightly sweet and nicely tangy, but the meat itself was quite tough verging on the unpleasant to eat. 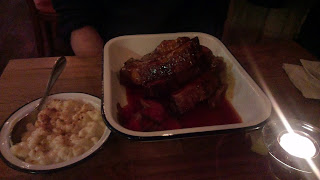 Pickles come as standard and I liked those a lot, especially paired with a mouthful of pulled pork and a bite of the cheesy hush puppies I ordered as a side. Hush puppies in case you didn't know are basically cornbread dumplings, but these were very cheesy and dotted throughout with chillies which gave them quite a kick (a plus!). Not great to eat on their own as they had a bit of a bitter aftertaste, their cheesy crunchiness did work well with the other items in my dish. Together they were greater than the sum of their parts, as Stephen remarked.

Stephen ordered the mac and cheese as his side and we both agreed this was rather good - given a much lighter touch than I would have imagined.

I didn't find Porky's offensively bad, and given that the two places I consider top of the BBQ game in London (PItt Cue and BBQWhiskeyBeer) aren't moving into Camden any time soon, Porky's I'm sure will continue to do quite well there. The BBQ market has definitely not been saturated yet so an average place can still be popular. The restaurant itself was a nice place to hang out - it was decorated with posters of Country & Western and Blues stars, was playing similar over the PA and both the beers and cocktails looked good (we didn't try them). 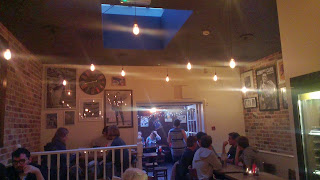 The final straw for Stephen was the fact that, given two condiment holders - one brown, one red, they had put the BBQ sauce in the RED bottle, leading Stephen to dump chilli vinegar all over his food instead of BBQ sauce. The horror! Clearly unforgivable.