Stephen and I were both already convinced that Berners Tavern was going to be gorgeous both aesthetically and gastronomically, so the fact that it was, was no surprise. 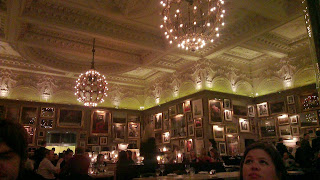 I think Jason Atherton must be having a laught calling it a Tavern. I've rarely dined in grander surroundings whereas a tavern to me is somewhere peasants go to drink. This place is huge, with walls completely covered with framed portraits. They fit together in such a perfect jigsaw that the arrangement must have taken ages to design. You feel like you are dining in the middle of a fine arts gallery. The other decor is no less sumptuous with giant opulent chandeliers hanging from the ceiling and grand banquettes taking centre stage on the floor. 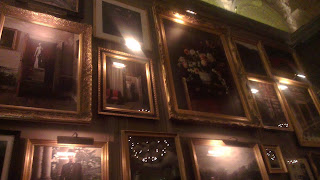 We arrived very promptly at 8 but something had gone wrong and they didn't have our reservation. Luckily the place wasn't as busy as we thought it would be and they were able to find us a table within 15-20 minutes. Which gave us a chance to try out the cocktails at the bar. An expensive chance, for at £12 - £12.50 they weren't cheap, and probably an expense we wouldn't have incurred had our table been ready when we were. But they were rather good, mine in particular with mead in it was one of the more unusual cocktails I've ever had - and I've had a few.

We were lead to our very low-rise table. Luckily it came with low-rise seats so we were in proportion. We were rather tickled, though, that our waiter was the tallest waiter we had ever encountered, making us feel a bit like we were children seated at the kids' table, looking up at the looming adult serving us.

The staff were very friendly. We had a couple of little mishaps but in a way we didn't mind - it made the whole place seem more 'human' than had everything run like clockwork. For example, we had to ask for the wine menu, when we were being asked for our food orders, and then, after our starters were cleared away, someone was sent over to crumb down. He thought we were done and cleared away our placemats and salt and pepper and then brought over the dessert menus. At first I wasn't sure if they just liked to get prepared well in advance but then we pointed out we hadn't had our mains yet and he was very apologetic and whipped those menus away. And returned our salt and pepper. Though not our placemats...

So, the food. Was wonderful. Starting off with the bread and butter they brought us - two slices white, two slices rye (possibly, can't remember now!) it was dense and had the right amount of chewiness. And there was enough butter not to feel you had to eke it out. 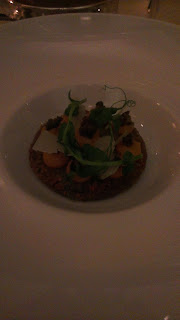 I had looked at the menu beforehand and was particularly worried about choosing a starter as I liked the sound of pretty much all of them. A recent potential allergy to seafood helped me narrow it down, but not by much. We thought for once we should try one of the 'renowned' dishes so Stephen had the ham, egg and peas, while I went for the crispy lamb with butternut and parmesan fregola with marrow crumble.

Wow. What a meaty, hearty dish this was. Honestly, I'd have been happy if this was a main course. I had a 'patty' of lamb which was mixed with some greenery and was crispy on the outside. It had been daubed with butternut squash puree, shavings of pecorino and then bits of marrow crumble I believe. This was then served with a pot of the fregola which had a much deeper cheesy, butternut and marrow taste. It was such a profound earthy, meaty flavour. I loved it but it totally blew Stephen away and he pronounced it the star of the meal.

From the bite of his egg, shards of ham and light, minty mushy peas I had, I thought his starter held up pretty well to mine, but he was having none of it. 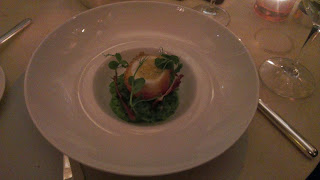 We continued feeling pretty pleased with ourselves with our mains. I could not resist having the duck, even though I seem to end up having it everywhere. But when it came with such yummy-sounding things, how could I not? The caramel apples in particular were worthy of note although the plum puree and turnip all tasted great with the perfectly cooked duck. And it was so nice to get a bit of leg with it as well. Dark duck meat is fab.

Stephen had the rack of lamb with lamb neck, cous cous, smoked aubergine and cabbage which he also very much enjoyed though he wished he had more sauce with his as the cous cous soaked it all up. 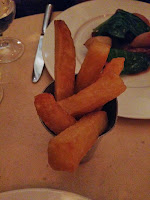 On top of this we ordered some of the duck fat chips and yes, managed to fit them all in as well. We thought that they were better than the chips at (whisper it) the Hand and Flowers!

We were utterly stuffed by now, and must have looked it because when we finally ordered the dessert, our waiter immediately asked if it would be to share. To be honest, we almost passed on dessert as compared to the other courses, nothing was standing out as a 'mustn't-miss' dish. But I'm glad we didn't as we were served the best eclair I've ever had and I bloody loved it. It was a proper pud with lots of gooeyness and cream, and pastry but in a refined way. Salted caramel ice cream on dark chocolate nibs partnered the caramel-apple stuffed eclair. Fantastic. The only qualm we had with the meal was that prices are very steep, a few quid less here or there would have felt like a reasonable price to pay. 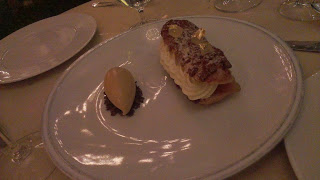 And so, our love affair with Jason Atherton continues.

*Apologies for the poor quality photos - the lighting, while perfectly ambient for dining, was too low for good pictures.